I've never been more stressed. Why must they go on at the same time???

Today was a monumental day in my life’s story. When my future biographers cull their notes together and begin writing, they will know that the 28th of June, 2014, was the peak of my life. Everything leading up to it was but a pleasant revery, everything following it was downhill. Why, you ask? Well, today was the day that I saw DOLLY PARTON.

But let’s go back…through the years, I go wandering once again…that’s going to happen a lot. I’m sorry. Let’s go back to the morning. Today was London Pride and there was no way I was going to miss a parade of drag queens. I live for drag queens. They are my everything.

I’m not sorry about all the Dolly.

I was reading about the day’s events and was delighted to see that Ian McKellen would be in the parade! Conchita Wurst:

was going to be singing…so I thought she might be in the parade. And Tom Daley is the most famous homosexual in all of Britain, so I thought he might be there. That was just a fantasy of mine, though:

While I was praying real hard to Beysus that Tom would be there, I realized it would be for the best if he wasn’t there because I would combust. I would just melt. I would drop dead. It would be the happiest death of all time.

We hopped in the Tube to make our way down to the parade route, but there weren’t many people out and about. I learned later that London Pride is very popular, but it doesn’t draw a crowd of millions like in New York City or LA. Here, it’s usually around 20,000 people. 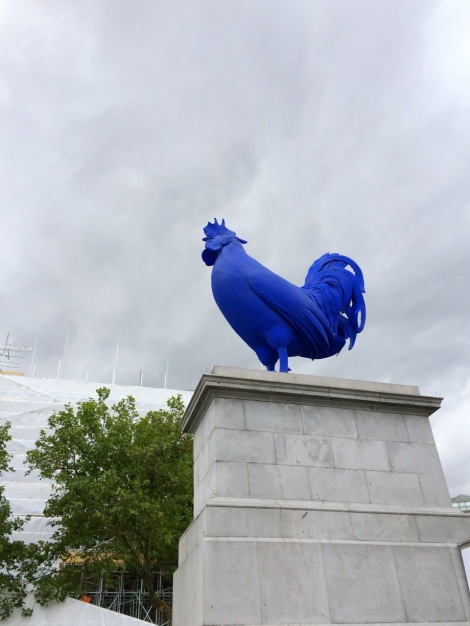 Jessica was instantaneously annoyed and shouting things like the following to the mingling crowds and workers:

WHERE ARE THE DRAG QUEENS I WAS PROMISED?

SOMEBODY BETTER THROW A CONDOM AT ME.

I don’t know why I take her out in public, reader.

We were peckish, as always, so we stopped in a Pret A Manger so that we wouldn’t starve to death. I looked hella cute, so I was offered a free white tea by the management. Jessica wasn’t offered anything, and so she was hella pissed. She is constantly annoyed how people of both sexes flock to me. I can’t help it. I WAS:

As we were finishing our rather tasty nibbles, we attempted to leave, but the heavens opened up and rain fell harder than I’ve ever seen it. The flooding was biblical.

When the torrential downpour became somewhat manageable, we hurried over to a vendor selling umbrellas and bought a very patriotic Union Jack one. The second Jessica handed over her money, the rain stopped. That was amusing.

But the parade went on as scheduled…but we were at the end point of the festivities, so we had a long time…like a LONG time…to wait for the parade to begin. Instead, we cheered on these fabulous pigeons: 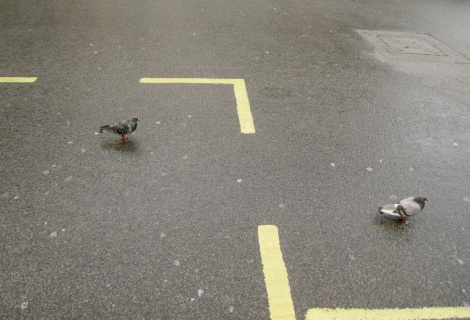 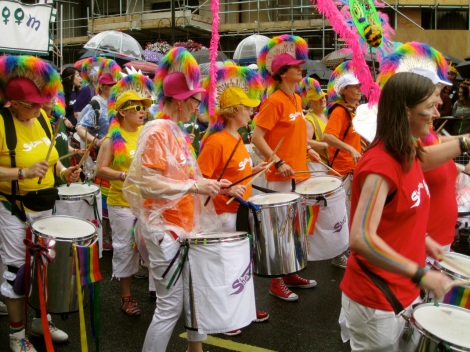 Everybody was soaking wet but they’re attitudes just seemed so good…that there is a Dolly reference as well, albeit a bit more obscure. 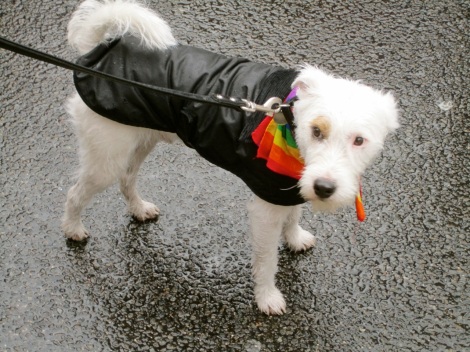 Look at this dog in his coat of many colors. See what I did there? 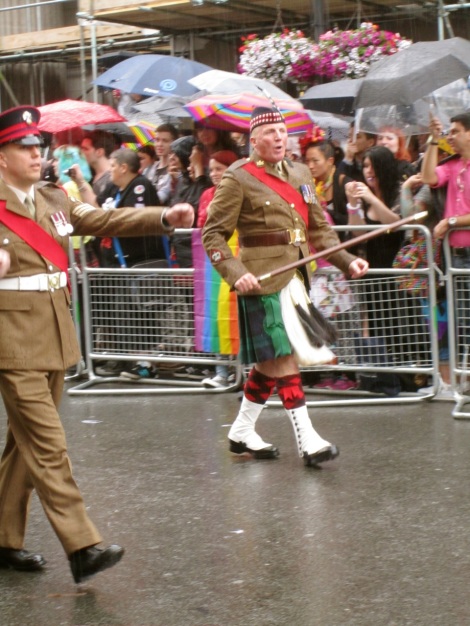 Today was also Armed Force’s Day, so there was lots of military flair. 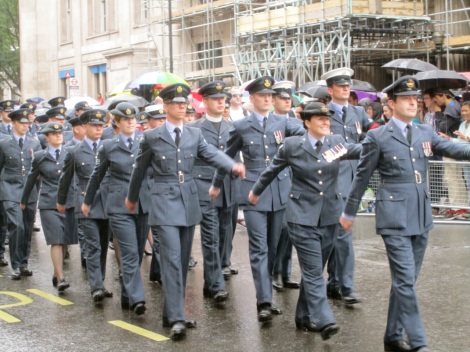 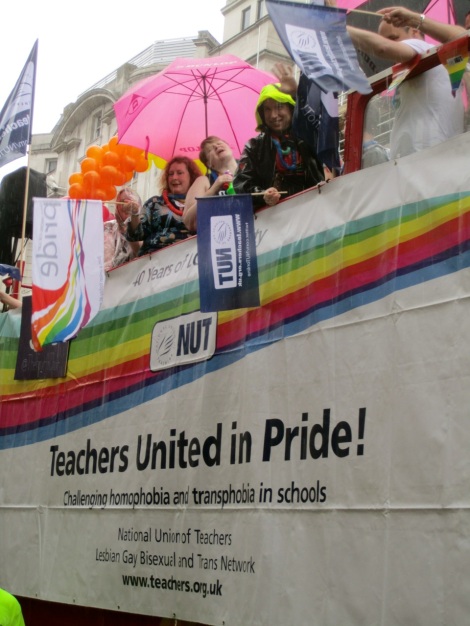 The teachers float was rather touching to me. I don’t see a lot of homophobia going on in the school where I work and that’s such a sweet thing to me. 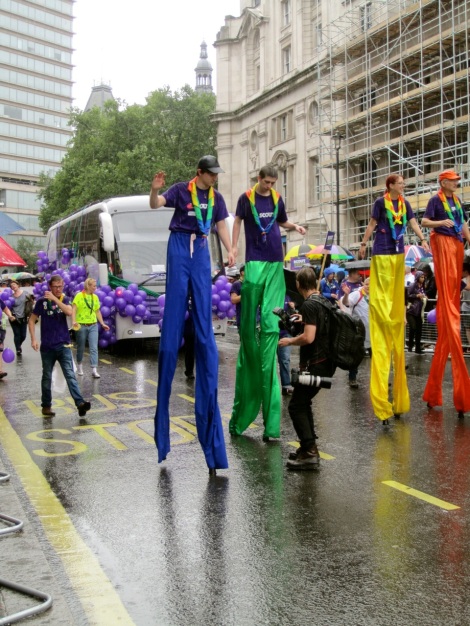 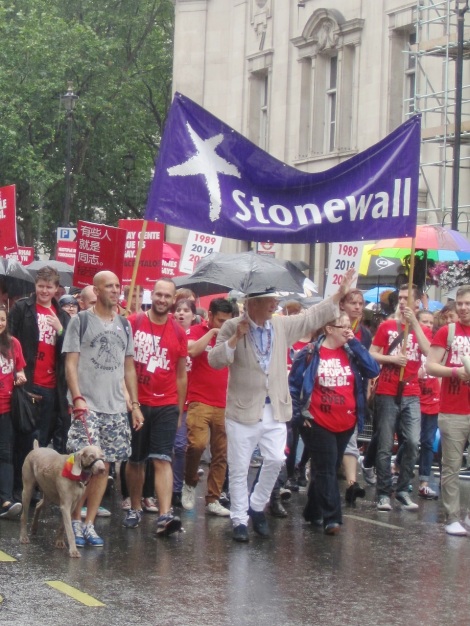 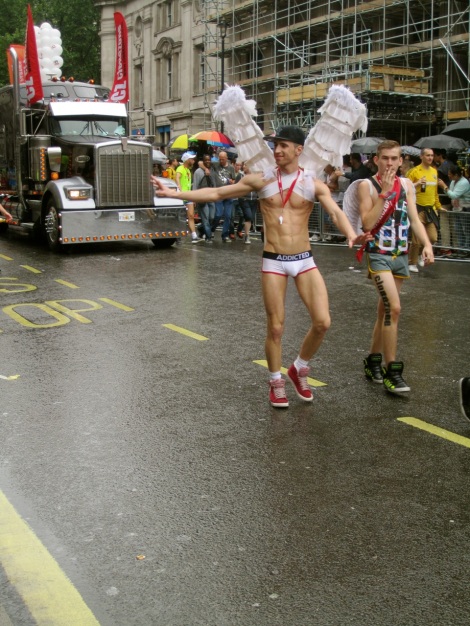 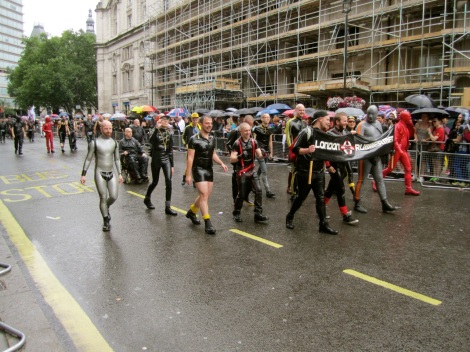 Lots of men in plastic suits, which I think would be awfully uncomfortable. Think of how sweaty you’d get in one of those things. 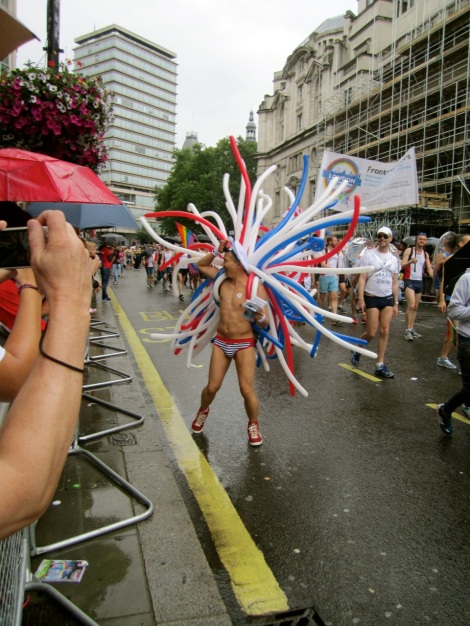 This man had a FABULOUS weave. 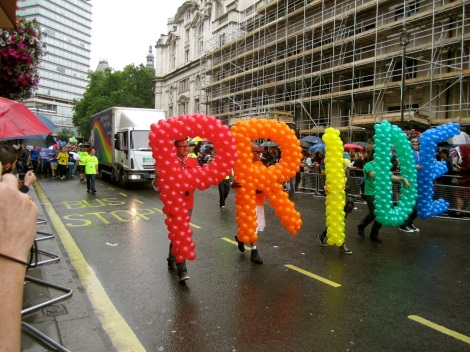 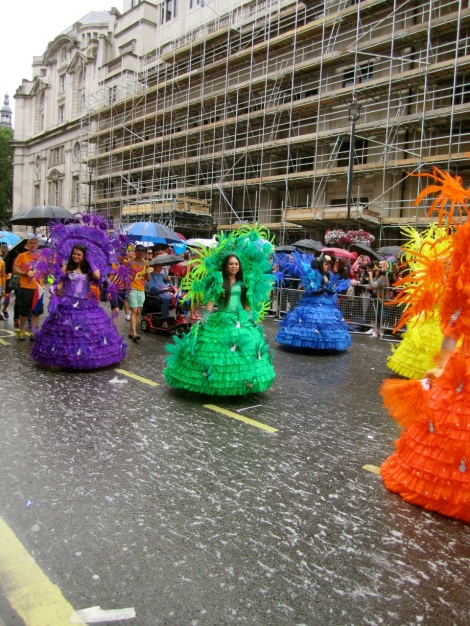 At this point, Jessica was super pissed off. She was upset that nobody had given us condoms, only lube, and she was tired of all the whistling and smoking and umbrellas. She doesn’t really like fun all that much and prefers to be whiny and undressed in her house. I freely admit that it was a bit annoying to have cigarette smoke blown into your face every second and the guy to the side of us was calling over EVERY SINGLE drag queen from the parade to take a selfie with him. We assume he was having some sort of contest.

I think the reason that Jessica was having so little fun was because she was hungry again. AGAIN! So, we had to go to this disastrously bad Italian restaurant across the street from the British Museum where she ordered fish and chips that she POKED. I ordered an awful caprese salad with some godawful salty minestrone. It was such shit. There was an award winning fish and chips shop down the block, but Jessica was insistent on going to the Italian place for English food. Le sigh…

From here we headed onto the Tube to the 02 to see my beloved DOLLY PARTON. 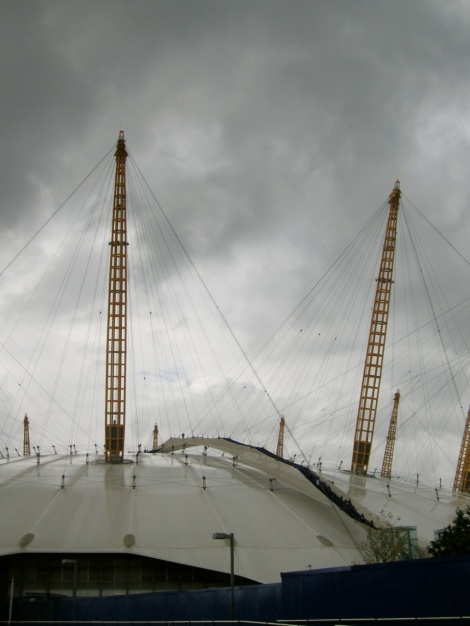 Now, I must digress for a moment. Conchita Wurst was scheduled to sing at Trafalgar’s Square at 5:40 and Dolly’s concert was scheduled to begin at 6:30. There wasn’t enough time to see both, so clearly I went over to Dolly’s. Infuriatingly, 6:30 was simply the time the doors open, although this is said nowhere. It’s not in the papers. It’s not on the ticket. It’s not on the 02’s website. It’s some kind of secret. Dolly, in fact, was not scheduled to go on until 8:00.

GODDAMN IT! I COULD HAVE SEEN CONCHITA!

Let’s just watch it now together, then:

Really close to the stage…for £55. LOLz.

So, we sat in the 02 for ages and ages and ages sipping on warm rosé all alone in the gigantic stadium. There was next to nobody there! Slowly and finally the crowds began to arrive…around 7:30.

Many awful hats in the crowd.

We were suddenly packed like sardines, but I didn’t give two bothers because it was about time for Dolly to come out.

GUYS, SHE IS FLAWLESS. SHE IS A QUEEN. SHE IS A DIVINE RAY OF LIGHT. SHE IS EVERYTHING.

She sang so beautifully and when she sang “My Tennessee Mountain Home” I won’t deny that I wept a little bit. I love that song so much. It’s one of my very favorites.

and it was the greatest moment of my life.

During the interval, I went looking for some water, but gave up and drank from a fountain in the bathroom, which was strange because there were many men in there and then a gaggle of drunken ladies in the middle of the room. I don’t think anybody clearly understood what they were doing, not even themselves. They were hella drunk, reader.

Back from the interval, she sang a song that I didn’t think she would sing. It’s never been mentioned before in the set lists. She sang this:

This was a bit too much for me, reader. “White Limozeen” is one of the Dolly songs I play when I want to feel better about myself. It’s on my HOLLYWOOD playlist, which is full of songs that help inspire me to avoid my moments of darkest depression. I’ve always had a thought that I’ll find happiness in Hollywood. Someday I’ll move there and I’ll have to work, but I’ll make something of myself. As Dolly sang it, I was a bit of a mess. It was like when I was at that taping of Dancing With the Stars and they sang “Party in the USA.” That was weird. I take this as a divine sign from reverend Dolly.

And she did take us to church, reader: 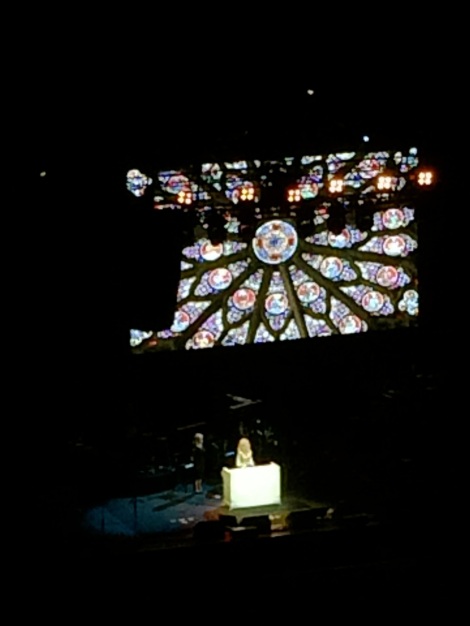 This woman across the aisle had never been more enraptured in all her life: 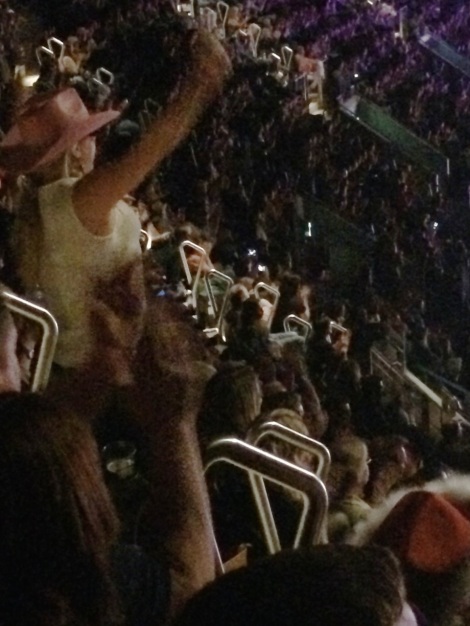 The concert was a flawless event and there’s nothing quite like singing “I Will Always Love You,” “9 to 5” and “Here You Come Again,” with thousands of people and Dolly Parton. It was very special.

I’ve loved Dolly for so long. I never thought that I’d see her in a huge London arena, I always assumed it would be on a tour in a casino or at a state fair or something. I’m so glad that I was there, so glad that I’d seen Dolly, so glad that we had come to London — for our time in London had suddenly drawn to a close. Tomorrow, we were heading off to Paris, the city that has my heart.