I still haven’t bought the iPad Pro, but I have no doubt that it will be mine at some point. I was going to get it as a New Year’s gift to myself for the next semester, but then I bought a car instead. I like the car, so I can’t complain, but I want that damn iPad. I have had the one I’m typing this on for years. It’s slow and somewhat unresponsive. And it isn’t gold, which is hella upsetting, dear reader. I haven’t had the chance to try one out beyond a few lustful glances in New York City. Finally, though, I got to experience the full power at the Jordan Creek Apple Store, and I absolutely lost my mind. It wasn’t terribly different from the old one beyond the enormous size, which I loved immediately. The keyboard attachment was helpful. But then I tried the Pencil, and reader, I have to tell you, my life was completely and irrevocably changed for the better. I have to own one as soon as humanly possible. I never knew how much I was missing by being unable to write digitally. It’s so beautiful. I love writing by hand, and I love technology, so this combination is the perfect marriage. It looks exactly as if I wrote on the iPad screen with a pencil. I’m obsessed. I can take notes for my classes and write drafts of my novels with my own hand! I find myself so much more connected with the creative process when I write by hand. Typing is rather soulless. And you can add divine little sketches. I think this will make my life infinitely better. Just got to save up. I hope to get one before going to Europe this summer so that I can leave my heavy MacBook behind. I’m in love with the future and I’m ready for it.

Light in the Piazza:

I just started the spring semester of my college courses, which is an awful thing for my schedule, but it’s exciting to get a step closer to finishing. It’s taken a lot more time than I expected, and I sincerely should have done this a decade ago, but oh well. We live and we learn. This semester, I am taking a course on film appreciation. Can you imagine? Why is that a thing? It’s just as ridiculous as that art appreciation class I took the first time around. For one of the first assignments we had to introduce our favorite film and justify its merits. This was one of the hardest things I’ve ever done. Long time readers will remember my hideous New Year’s Resolution of a few years back where I watched and reviewed a film every single day. I’ve never done anything dumber in my life. I learned a lot about how bad movies could be, but I also discovered some gems. Still that was 365 movies…sweet Beysus. Anyway, I went with Fearless Fagan, that endlessly charming picture about a lion and his drafted master…I can’t get into this now, I’ll write on rapturously forever. But, thinking on my favorite film made me think about Light in the Piazza, which is another longtime love of mine. So I had to watch it last night, and I was again madly in love at once with that magical movie.

It’s all about Olivia de Havilland’s character, Meg, and her struggles with her daughter Clara who has suffered brain damage. She has the mind of a ten-year-old child, but the body of a young woman. Clearly this is trouble, and the trouble only increases when the unreasonably handsome Fabrizio, played by George Hamilton appears and seeks Clara’s attention. I can’t give anything away because I insist you see it. The scenery is beautiful, the story is thoughtfully put together, the acting is truly refined, and the viewer is left with inexplicable love for the world. It’s a rare film. It will pop up occasionally on TCM, and I was thrilled when I found it was available for purchase on Amazon. See it, then on your next trip to Paris, you will be like me standing in front of Olivia de Havilland’s townhouse shouting, “I LOVED YOU IN LIGHT IN THE PIAZZA.” The windows will be open as they were for me, and there will not be a response, but you’ll know in your heart that Olivia heard you, and she smiled, and then you’ll burst into tears and run away. But maybe not. I’m peculiar. Get this movie, reader.

I have been a fan of the concept of Apple Pay since I first heard about it. All you have to do is hold your phone over the credit card machine, and presto! you have been charged for your purchase. You don’t need to dig out your credit card, you just let the phone read your fingerprint. That’s convenience! When it was first launched, Discover cards weren’t accepted by the system. I don’t know why, but it never fails to annoy me when my beloved Discover card isn’t accepted. I got so angry one time at an LA cupcake shop that they gave me a free mini cupcake. That was embarrassing, but I was hella frustrated, reader. Late last year, the card was finally accepted, and I set it up, but I never found an opportunity to use it. So, I kind of forgot about the entire system. The other day, I went to dinner at Panera Bread, and I saw a little Apple logo on the cash register, so I knew my time had come. I pulled out my phone, I scanned my finger, the phone buzzed, I shrieked, and the transaction was complete. I was in a state of ecstasy, dear reader. It was so simple, so effortless, and it was truly magical. I know some of you may naysay my thoughts on magic, but I was immensely charmed. I hope that it is rolled out into every store in the nation. It was just so pleasant! I mean, honestly, I’ll always get a thrill out of sticking my chip card into a reader, but this was delicious. Go out and shop today. LIVE.

Death of the Midnight Megabus:

Reader, I am in a state of shock. I’m endlessly upset, and I sincerely don’t know if it’s something I’m ever going to get over. I really don’t think so. You see, for years and years, there has been a midnight bus from Des Moines to Chicago. It wasn’t chic or elegant. It wasn’t very timely. And I honestly don’t think it was super safe. But, I loved that bus with all my heart. I don’t know how many times I have gone to Chicago on a whim to see a Beyoncé concert, to stay at the Drake, to wander the halls of the Oriental Institute, to secretly catch a plane to Paris, to grab a train to California, or just to get away from reality and spend a quality lunch on Michigan Avenue. It was everything to me. Chicago was my easiest connection to the bigger world. If I was feeling down, I knew that I could spend maybe $10 and I’d be on my way to America’s third largest city. But that is no longer. Now, there is only one bus a day to Chicago, and it leaves in the middle of the afternoon. That means it wouldn’t arrive until at least nine o’clock in the night in a weird part of Chicago. I’m so upset. My day trips are dead. Now if I want to do it, I will have to spend the night. I don’t even know when it heads back to Des Moines. Alas, those frivolous days are dead. I was trying to plan my spring break getaway to California. I found super cheap tickets to Los Angeles, so I went to confirm the bus had availability…and it didn’t exist. Now I have to leave from Minneapolis. I’m going to go cry myself to sleep.

Look, guys, I know that I go on and on about being ancient. I feel like I’m a million years old. Of course, I’m not. I’m only in my twenties, but there are some things that I just don’t get that the youths all do. One of my main concerns these days is Snapchat. I do not understand it. I’ve had it for ages, but I’ve never felt as if I knew what I was doing. Pictures that vanish? That’s all well and good for certain kinds of material, but for recording and chronicling your everyday life, I just don’t get it. You can’t comment or show that you like an image or video. You can’t have a logical conversation. Everything vanishes and then you have no memory of the fabulous life you once lived. That’s why I stick to Instagram. It’s there forever and there are intelligent filters. On Snapchat, there are just these bizarre mask things that make me look like a mummy, or a mermaid, or Angelina Jolie. 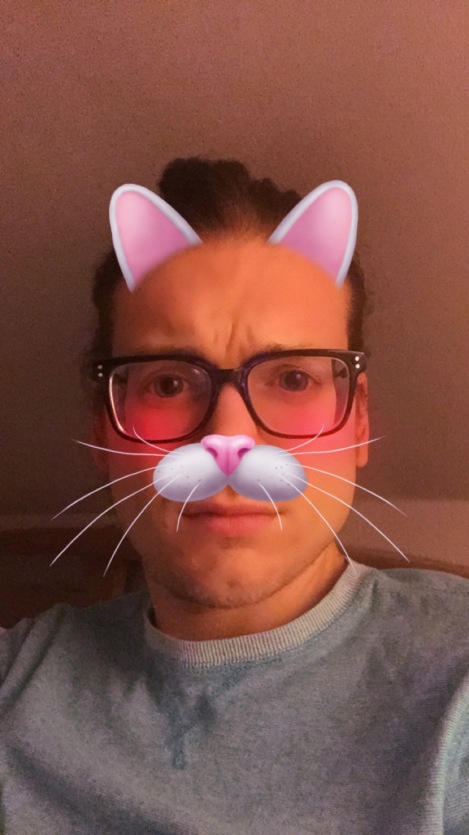 While interesting, I don’t get the purpose. Is life really that simple for people that this thrills them? I hate getting messages on there because I can’t hear anything the first time and then sometimes you can’t replay it. It’s endlessly irritating. However, I do like that I can follow Paris Hilton’s life. I enjoy that tremendously. Oh, and I cry basically every day over David Leibovitz’s posts on Paris and the food he’s making and the desserts he’s eating. But, other than that, I couldn’t care less. Maybe it’ll grow on me?