In 2014, we were in Paris for the Bastille Day celebrations, and I was bound and determined to enjoy them all. We did, but in retrospect, I don’t understand why I was so fervent about it. The Fourth of July is one of my least favorite holidays back home. I don’t like parades…at all…fireworks aren’t my thing, and nobody’s grilling vegetarian burgers. So, it’s just not for me. Instead, I’ll tan in my American flag speedo and slurp on a gin and tonic out in the vineyard. America is the land of the free and the brave, remember? So, we all celebrate in our own way.

The parade in Paris was no more entertaining than the one back home. Less even. Nobody threw Tootsie Rolls or Smarties at my head. It was a military parade, so we got to see every horse in France and every off-duty soldier in the nation. It was neat for a few minutes to see their precise movements, and it was actually rather cool to see President Hollande whiz by on a chariot, but the crowds were overwhelmingly large and Jessica was having none of it.

We later learned that the secret services in France diffused a terrorist plot to kill the president during that parade. We didn’t know it back then, we only learned of that months later, but it was such an innocent time. Of course it really wasn’t, but it feels that way. The Islamic State was but a twinkle in our eyes then. I never would have thought that just a copulent years later, the city that I love most would have been repeatedly and savagely attacked by extremists. No, back then it was just parades and fireworks and baguettes and good fun.

We’re different now, of course, as the world has forced us to be, so we chose to stay in on Bastille Day this year. There was something in the air in the days leading up to the holiday, some intangible malice that darted and wove itself into the fiber of life. Paris is not the Paris I used to know anymore. The city has an edge of menace and fear. It’s hard to pinpoint. It’s in the way the people walk on the street, shuffling constanly forward, eyes to the side. Parisians don’t smile, that’s been a rather true stereotype for years, but as you walk, you’re expected to give people an eye, look them up or down. It’s very flirtatious. It’s not done so much anymore, and I felt strange because of its absence. People seem to be looking for clues now, or to blend into the background. It’s all very sad. 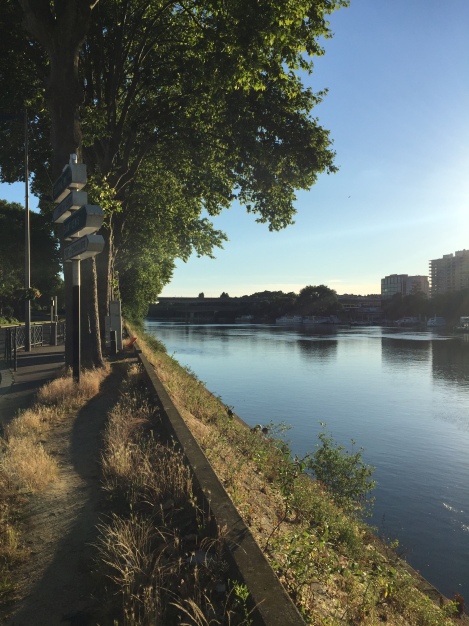 Late in the afternoon, I took myself on a walk through Clichy. It’s a much bigger city than I even imagined. Larger than even my maps made it look. And it’s fabulous. Everything you could ever hope to want can be found in Clichy. There are bakeries, shops, squares, parks, fountains, art, wide boulevards, twisting streets, kebabs, and more. I feel more in love with it than before as I walked along the Seine, which was only about fifteen minutes from the apartment by foot. I never would have thought. 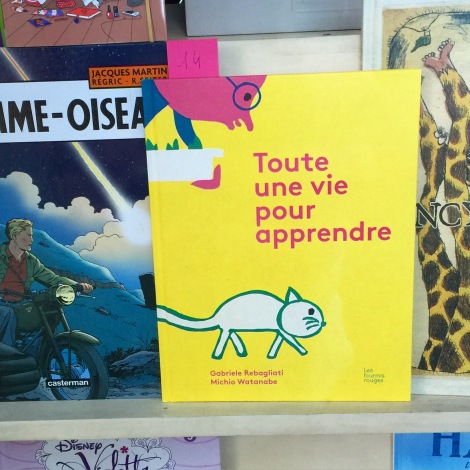 Sated by my stroll, I returned to the apartment, hung from the ceiling, 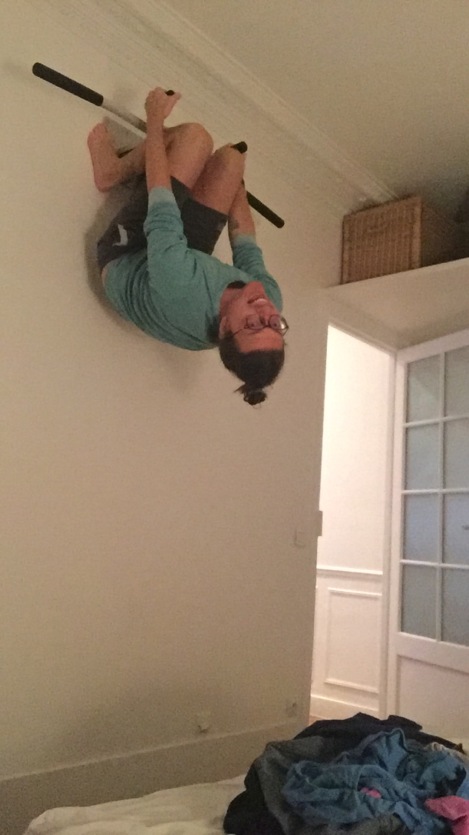 made dinner, and then called Jessica out to watch the fireworks on the television. It was much simpler than messing with the thousands of people battling for space on the RER and Métro. They were a nice display, and noticeably more cheerful than those of two years ago, but fireworks are fireworks and very soon they become awfully boring.

When I came back in from making coffee there was a little banner streaming along the bottom of the screen, nothing to cause too much alarm. Just a sad little notice that there had been a vehicle accident in Nice and that several people were hurt. You know where this is going.

The real news began to stream in, a trickle at first, but then at full throttle. It was no simple accident. It was a terrorist attack. The death toll climbed steadily and I couldn’t believe the scenes I saw unfold in front of me. It was like watching my home being attacked. And it was, reader. This killing began directly in front of the apartment building I rented last summer. The truck careened up the Promenade des Anglais where I strolled at least once a day. It came to a rest outside the Negresco hotel where I celebrated my birthday. And all along the promenade was a trail of dead and dying bodies. It is more gruesome than I can explain. It felt more horrifying than even I can describe. I had to sleep.

In the morning, it was clear that it was an attack. It wasn’t an accident like so many had been hoping for. It had been a man on a mission to kill. As more of the specifics were announced, the sicker I felt. If you remember the post I did after the massacre in Paris last year, you’ll recall how horrifying it is, I wrote, to see streets you know like the back of your hand covered in corpses. Well, it’s quite the same thing all over again. I know the Promenade des Anglais like the back of my hand.

I was in shock. Who had been killed? Did I know them? Was it the prostitute that would nod at me each night outside the apartment building? Was it the exceptionally nice waitress that made me a kir pêche whenever I sat down? Was it my neighbor with the barking dog? Were my friends and acquaintances from Villefranche in to see the fireworks? Was Madame Betty or her friends there? Were the Bonifaci’s? This killing felt even more personal than the travesties of Paris, and I will forever be haunted by it. Which, I suppose, is the entire goal of those perpetuating the horror.

Jessica was deeply concerned. She didn’t want to leave her room, let alone the apartment. And I got angry. I couldn’t help it. It wasn’t gentle or kind on my part. But, I have spent years of my life now extolling the safety of travel, the bravery of doing what you want even though it could kill you, the joy of a world where you defy the odds. I get people talking to me regularly about going places and how dumb I am to do it. “Why would you ever go to Egypt?” “Why would you go to Paris?” “Why would you even think of getting on an airplane.”

So I was truly and sincerely annoyed at Jessica. It felt like a betrayal to my world that she wanted to sit in her room, quivering in shadows, afraid to look out the window and see the beautiful city that still spread out around her. I must have given a pretty damn inspired speech because whilst I was combing my hair, she decided she was joining me. Don’t think I’ve really ever been more proud.

And it was a good day. No, it was a great day. I had the hair of a middle aged rocker, and that made it even better. 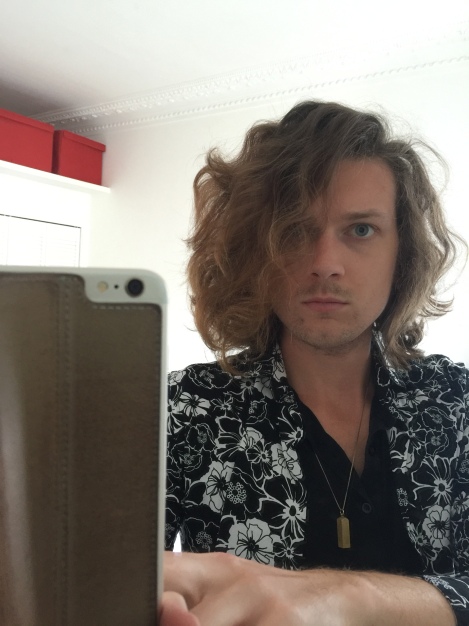 We took a potato to the grave of Parmentier, the man who worked tirelessly to convince the French that potatoes were not deadly. Bless him. 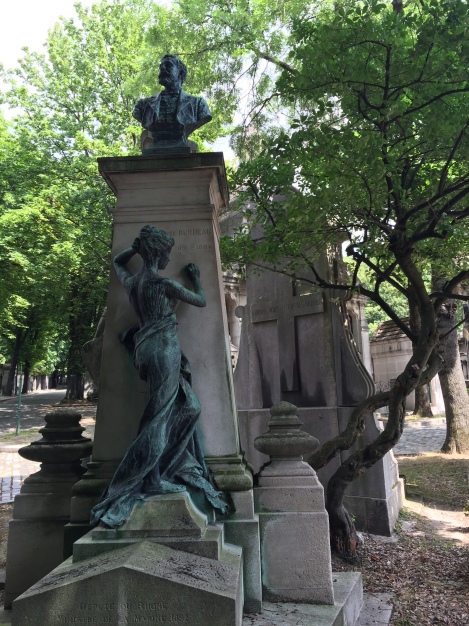 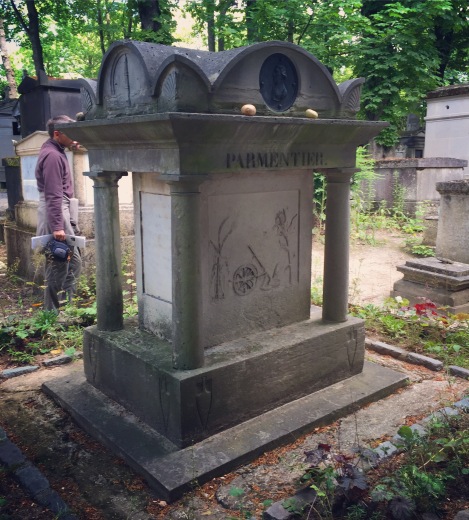 We went to Berthillon for ice cream, which we gorged ourselves on. We bought cake at Pierre Hermé. We ate gorgeous falafel in the Rue des Rosiers.

We strolled through the Louvre and walked the Saint-Honoré by night. And it was fabulous. 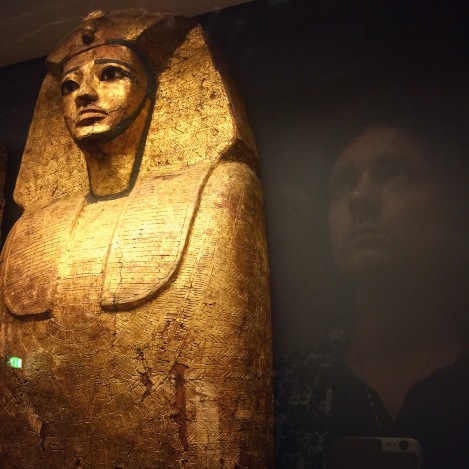 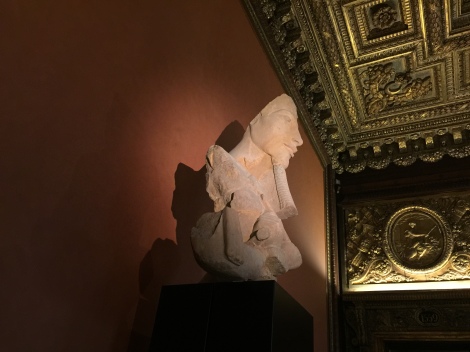 They try, reader, my god do they try, but they will never win.

3 responses to “PARIS: Not So Nice”