Today, being my last day, and because I had to check out of the Hotel Welcome by noon, I woke myself up at nine to glorious sun. I had left the sliding window/door thing open all night, so the cool sea breeze wafted in the room, which was nice and didn’t make it so hot. I packed up all my things, trying to keep my bag organized, which, unfortunately, didn’t make it any lighter. My bag from Topman has a way of being unbearably heavy no matter what I put in it.

As I’m almost never hungry in the mornings, I finished off my bottle of Oasis as a form of sustenance, which to me, was quite a good idea and quite tasty. As I drank the delightful concoction of orange juice, I lounged again on my terrace and finished writing my letters. When I had finished that, I decided that I should go and consult the train schedule. So, I left the hotel and walked down to the train station where I quickly bought a ticket, but could find no schedule of trains. From past experience, I knew that they take off every half hour or so.

From the train station, I went to the Bureau of Tourism to see if they could help me with a question I had. I wanted to know where the Hôtel-Ker-Maria was. I had looked for it all day and couldn’t find it. Nobody at the reception desk was familiar with it, so, I was starting to think that the whole thing was a very real figment of my imagination. I was very happy to find that I was not, in fact, crazy. The kindly old woman behind the counter knew exactly where it was.

That was all wonderful, but then she told me that it had been demolished. I asked when, and she replied, last year. Ahh! The irony, I had been here when the building I so wanted to see still stood, and now it was nothing but dust. She gave me a map and directions to where the building had once been, so, I took off to see the remains.

As it seems with everything in this village, I had walked by it yesterday whilst searching it out. There were high walls put up by the construction crew, so, I couldn’t see much. I peered through the cracks and saw nothing but rubble and it made me very sad. I climbed up to the road above so that I could look down on the site. From here, there was a much better view — I could barely make out the outline of where the building had once stood, but I could see that it had, in fact, stood. It was all very sad to me — such a lovely building being turned into an apartment complex with a miniature park. Maybe I’ll run an antique hotel someday, I think that’d be fun.

It was time to check out, so I made my way back to the hotel, grabbed by bags and letters, bought some stamps, and was on my way. I went to the beach so that I could soak up some more of the sun that I am always in such desperate need of. The rocks were surprisingly comfortable to lay on and warm. Pigeons walked inches from me once they assumed I was asleep — but no, I was watching them intently through my giant sunglasses.

There was a dog who seemed to enjoy standing neck deep in the water. He didn’t do anything but stand there, looking completely content with the world.

After two hours of this, I felt to both my dismay and delight, that I had a mild sunburn — yeah for tanning! I decided that I should go before my skin turned blistered and leathery.

While I had been relaxing in the sand, I thought to myself about all of the people McFarland had known when she had lived here — I knew many of their names from the stories she had told me, but, they were probably dead by now. There must be a cemetery here somewhere, I realized, but I didn’t have a clue, so, I went back to the Bureau of Tourism.

On my way there, though, I realized I was hungry, so I sat down at one of the restaurants along the bay. I had really wanted to try sole meunière ever since I had arrived, but it was always exceptionally expensive, usually thirty euros. So, I settled instead for a spaghetti bolognaise for twelve. It was definitely tasty, and I enjoyed it quite a lot.

After that, I made my way up to the Bureau of Tourism, where the same lady as before, showed me where the cemetery was. It was very close to the hotel, just down a different road. Soon, I was there. 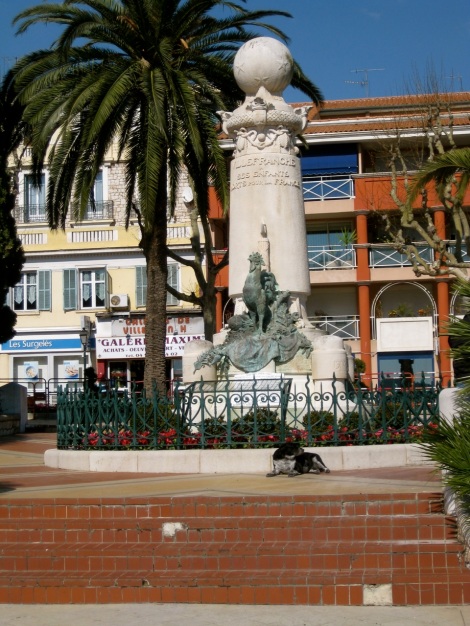 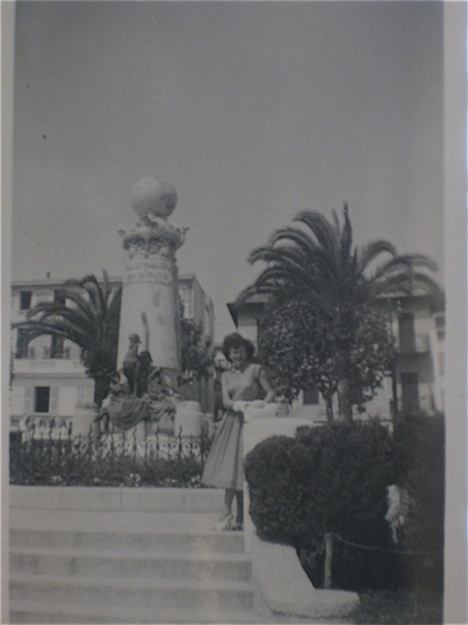 It looked diminutive — easily walked by the time I had to leave for the train. My first impression, as most usually are, was wrong. This thing was massive, but put into a tiny space. Parts of the cemetery were two stories high, parts were built on the tops of buildings, and all of it was connected by spiraling staircases and tiny little sidewalks. I walked around and around, feeling more frantic as each second past without finding a single name I knew.

Finally, though, I found the Bonifaci name, I’m not sure if these are the same ones that she knew, but it was the same name. Soon after I found the Duchâteu’s who I know aren’t the right ones, since I know that the girls she knew with this name live now or lived in Las Vegas. Then, after several minutes more, I found the Family Bernasconi. These were very close friends of McFarland’s when she was here, and I know that she will be happy to see a photo of where they are today — as macabre as that may seem. 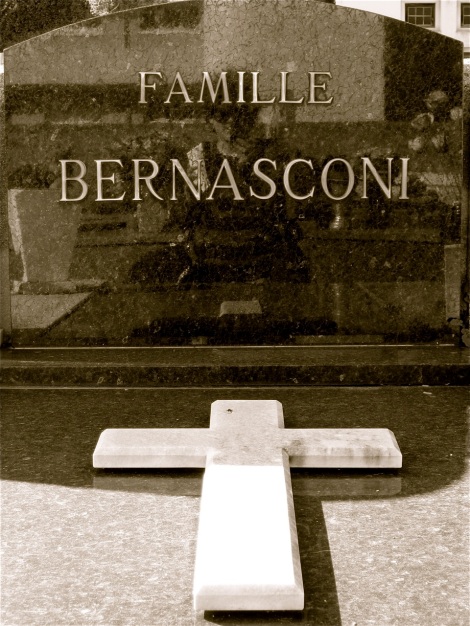 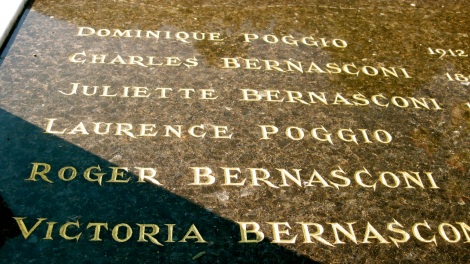 I had done everything I intended on doing in Villefranche-sur-Mer, much to my surprise, and I didn’t feel like doing anything else, so I went to the train station. Twenty minutes later, I was in Nice. The transportation was going exceedingly fast today.

From the train station, I had to take the shuttle bus to the airport and then I was quickly there. I had not expected so much of this speed, or else I suppose I would have went to the church in Villefranche, but, I was here now. I made my way to the self-checkin machines, but they kindly informed me that I can’t check in three hours early. I had to sit on a bench for awhile. I did some reading on my iPod and then bought three magazines at Relay to read. They were trashy and delightful. I was too cheap to pay for Internet (5 euros for an hour?) even though it would have made the time go much more quickly.

Finally, it was an hour and fifty minutes until take-off, so, I tried again. Now the machine couldn’t read my passport. I went to the counter and they printed my boarding pass.

Next step was through security. This was easy and I didn’t set off any alarms. You even get to keep your shoes on for domestic flights! They wanted to ruffle through everybody’s bags for some reason, which I don’t understand, it had just gone through an x-ray machine.

I didn’t even have a gate yet, I was so early, and feeling pretty stupid. So, I read my magazines, and before too long, it was time to board the plane. I had a window seat, and was lucky again to not have to sit by anybody, even though there was another person in my row.

We took off and I watched Daria for the hour and ten minutes we were in the air. Nice was very pretty, twinkling in the nighttime.

After awhile, I could see that the ground was getting brighter and brighter with a bunch of lights. We were nearing Paris! Soon, we were flying over the city and I accomplished, without knowing it was going to happen, a goal I have always had: to see the Eiffel Tower in a plane! It was so cool to see it look so tiny, we were very lucky to arrive at the top of the hour, so it began to sparkle like a miniature firework.

As we got lower and lower to the ground, you could see the cars driving and once, I could even see a soccer game going on. It was funny to watch the men, the size of ants, darting about.

Finally, we landed. Looking back at the runway, you could see three airplanes, all lined up in the air, descending to the earth. It looked very alien.

I was soon out of the airplane, and after a long walk, was at the train station. I had eight euros in change this time, so I managed to get a ticket. I couldn’t find the train at first, but eventually did.

Another kid got on and sat in the seat across the aisle. He wanted money. I said no. How stupid am I? Soon the train took off and sooner yet, eight police officers descended on the train. They told me to remove my feet from the seat in front of me. As stupid as that was, I didn’t argue. Then they began questioning the beggar kid. For reasons none of us understood, they arrested him and drug him off at the next stop. It was weird. He had seemed nice enough, for a beggar.

After a long ride, I was home, and then, before much longer, I fell asleep.