As I mentioned in my last blog post, I have an overwhelming hatred of winter that I can’t control. Actually, I rather enjoy having something to hate, since I don’t really believe in hate or negativity. Why waste time feeling miserable or exuding miserable thoughts towards others or other things? I don’t hold with such nonsense, and when things seem particularly desolate, I always remember to remember that nothing is as terrible as I may think it is and to say “screw it.” I saw “screw it” a lot towards the things in life that irritate me, and that helps elevate my state of mind to a place of contentment. I acknowledge that I have a pretty easy life, but it is possible to be depressed or blue, and that is how I fight it.

That rambling was far from the route I intended to take with this post, but, it is true that I enjoy hating winter and the bitter cold. I refuse to hate other things, so why not hate something I can’t change? It’s fun to be in the club of people who moan about the horrible conditions and the biting chill, and its fun because everybody loves complaining about the weather — especially Iowans. I have noticed in my travels around the country and Europe that nobody talks about the weather as much as we do. It isn’t normal to start a conversation by talking politely about the rain that is coming or the clouds blocking the snow. In France, you ask people how they are, getting straight to personal details. Maybe Iowans are more reserved and hold on to their privacy, or maybe I’m just noticing something that isn’t there.

But, to get this story finally started, I should start at the beginning. Earlier this week I was mumbling dramatically about the poor quality of life I’ve been experiencing lately, what with the blizzards, my seedlings having to exist in temperatures far too cold for their happiness, and the fact that when I went out to prune the grapevines, the snow went to my thigh and a deer ate one of my precious vines. Mother wisely asked why I hadn’t thought to go to the Des Moines Botanical Center. Now, this was an excellent question and I was ready to go that moment not really caring that it would have been closed at that hour nor the fact that there was a, you guessed it, blizzard taking place.

The thought of palm trees swaying in an artificial breeze, of flowers bursting, and of humidity was enough to induce me into a fit of happy tears, so I rushed to their website and saw that they were open everyday and on Saturday there would be a plant sale where rosemary would be available. Rosemary is my second favorite herb after thyme and nearly impossible to start from seed, so I was eager to grab one of the Botanical Center’s plants for only five dollars.

Unfortunately, Jess and Ma had to go to a Speech contest that turned into some kind of fiasco. The words bitch, cheerleader, twos, smiling, toga, and diction were parts of the long elaborate narrative, that I barely understood, that described why the Speech contest was an utter disaster.

Thankfully, I didn’t have to go and witness this, Pa took me to the Botanical Center instead! I was terribly excited to get there and we arrived about a half hour after the center had opened. The amount of cars outside should have warned me about the inevitable screw job that I would be dealt, but for the time being, I was too busy being enchanted by the dome of the building to care about anything but the palm tree I could swear I could see from the outside of the building as the snow fell almost tenderly on my head.

We made our way inside and payed the $5 fee only to find out that the rosemary was sold out. An old woman snidely remarked that I needed to get here sooner. I wanted to punch her in the face, and I don’t often feel that way towards the elderly. The scene that would have ensued had this occurred fell away from my imagination as I saw the palm tree just feet from where I was standing. 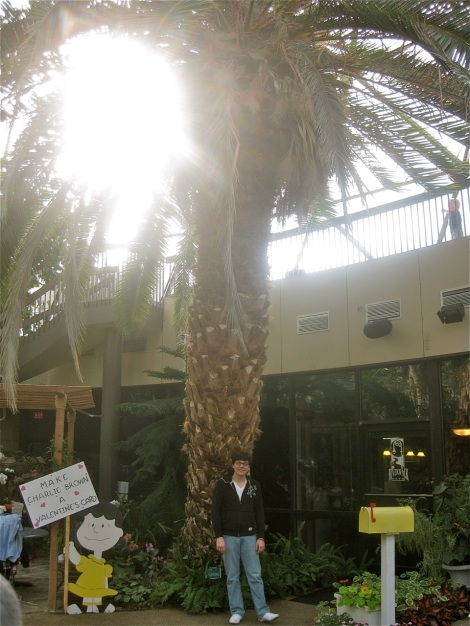 As I write this, I understand how pathetic and potentially mentally unstable I seem to be, but I really love palm trees. I remember when I was very young and my family went to Florida for the first time, I filled up little diaries that I never wrote in with rough sketches of palm trees, or how I remembered them to look. I found that in my room when I was cleaning it out last summer and it made me laugh. Ever since then, I have adored palm trees and all tropical plants. I have bought seedling palm trees and I have bought palm tree seeds, yet they never grow up, of course, due to the blizzards and snow that I hate so much, so, when I saw this tree, it was like meeting a pen pal for the first time, looking different from what you expected, but wonderful to meet all the same. 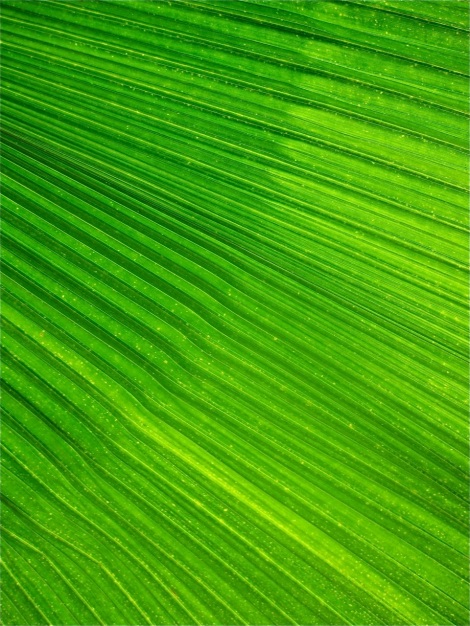 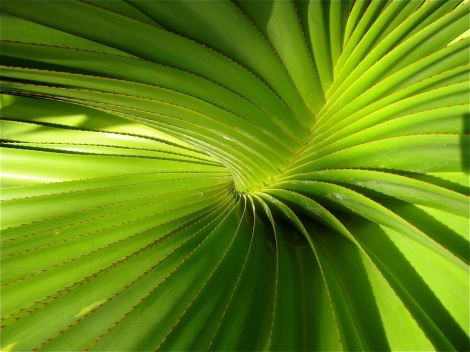 After having father take my picture under the palm tree, I rushed over to a banana tree and had him take my picture under that, too. Looking around me, I was amazed by the variety of life all around me, pineapple plants with tiny little pineapples growing on them, bunches of bananas hanging perilously onto their branch, ripe coffee beans, cacti of every imaginable variety, orchids of every color of the rainbow, and more than I even knew existed. 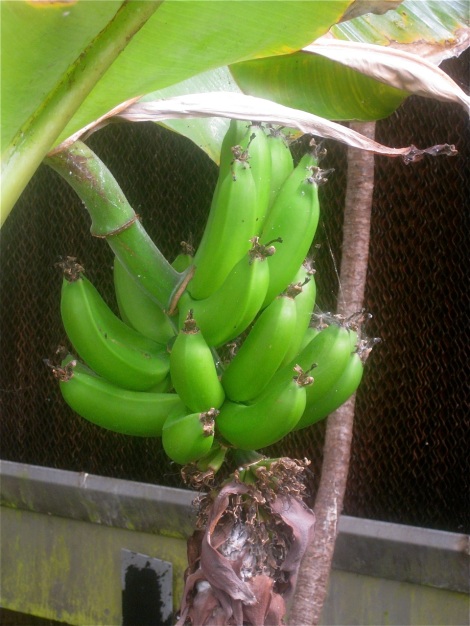 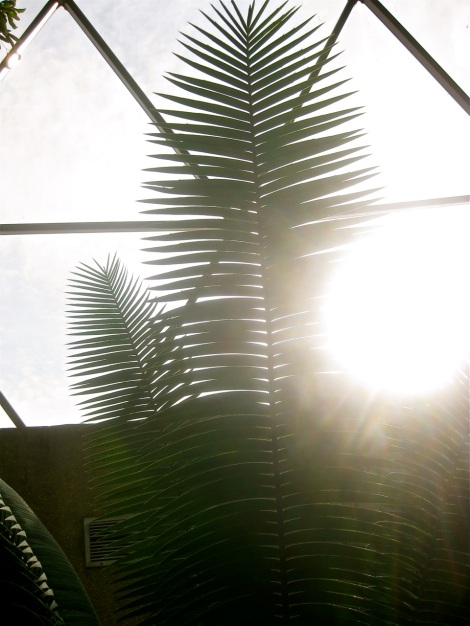 I enjoyed every step I took in the Botanical Center, delighting in the humid air, the fact that I was sweating from it, the fragrance of the dirt and the blooms, every little plant that popped up from the ground, instructing father on how to steal me a coffee bean. I enjoyed watching the lazy koi swim leisurely from side to side of their little river. There was nothing unpleasant, unfortunate, or unhappy about the whole place. 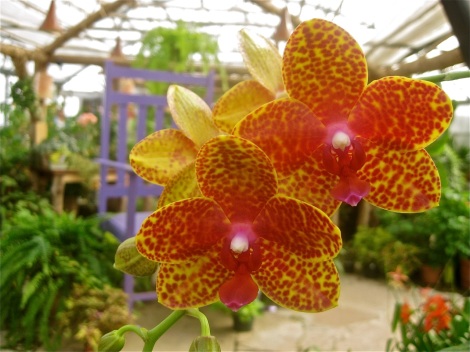 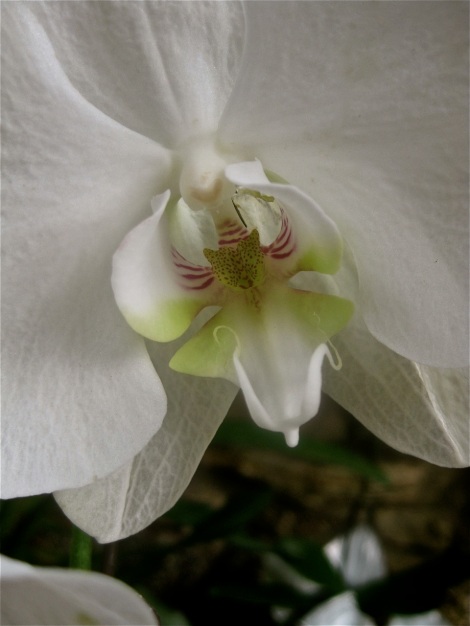 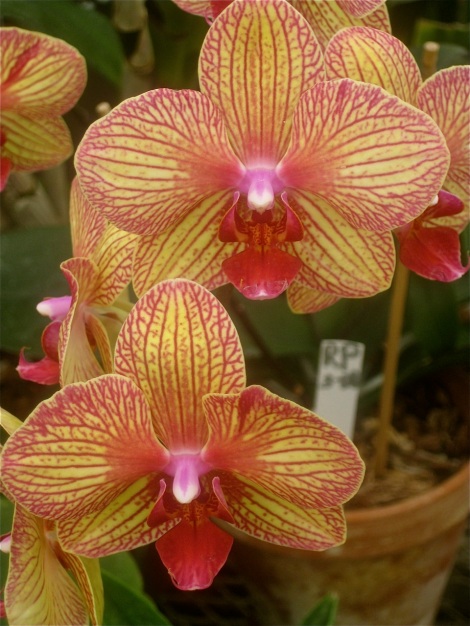 As I sat on a bench in front of a large banana tree, water dripping on my shoulder from somewhere, I realized that I would have to build a dome and live in it. What could be more magnificent than living in a place where you were in absolute control of the Earth, you planted every single plant where you wanted it and no weed would dare pollute your hard work since they would be nonexistent, where bugs wouldn’t eat your prized pumpkins because they, too, would be nonexistent, where you even controlled the rain and the temperature? The idea of this power intoxicated me and I knew then without a shadow of a doubt that my home will eventually be built inside of my dome where I will be living in the tropics no matter where I end up living, whether it be Alaska or New York. It doesn’t matter really, because in my dome every day will be the perfection I design it to be, and the perfection will only be enhanced by cocoa trees and vines of vanilla beans.