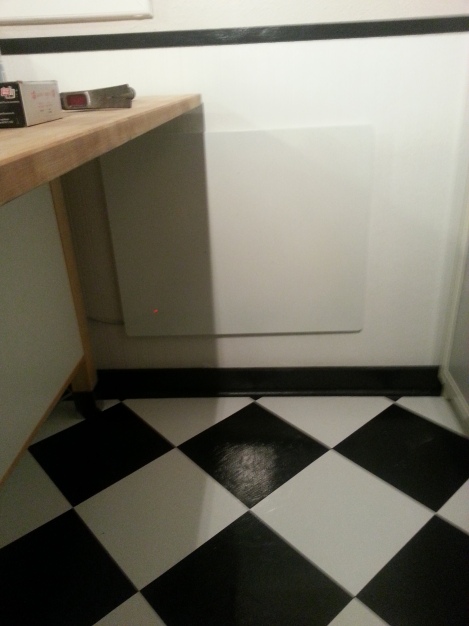 [I bet you can’t even see my sexy heater. Yes, heaters can be sexy.]

In my younger days, I never thought that I would enjoy anything at all to do with tools, but times change. Now, I adore them–they make life so much more wonderful. My love began when I started getting into remodeling. I became tired of living in an ugly house and so I decided I should change it. It’s becoming a beautiful place and I’m a bit addicted to improving it. The kitchen is my big project right now, and even though it’s taking forever, it’s good fun to see it evolve from a rather unpleasant, gloomy room to a bright, clean, orderly room. I never want to leave, but when I do, it’s to go to another gorgeous room I’ve redesigned–my beloved lounge. The other day, I was putting some furniture together from IKEA and the drill made it so easy. I don’t know why I wasted so much time with a screwdriver. I also mounted a really cool flat panel heater on the kitchen wall. That’s one of my favorite spontaneous purchases. I found it at Fleet & Farm…or Farm & Fleet…don’t know which. Did you know they’re both actual shops? That still befuddles me. Anyway, it was only $30 bucks and it looks awesome hung on the wall next to the peninsula I installed. It blends right into the faux headboard wainscoting. Be jealous. 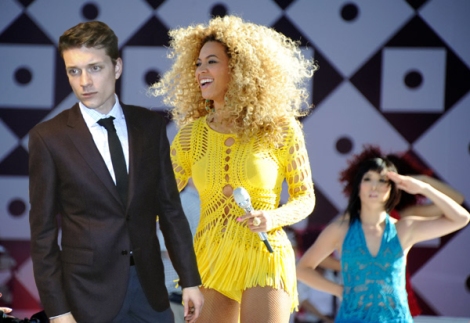 You know how Beyoncé are very close, right? We’re best friends and I love her, but I do think she takes advantage of me. Yes, of course, I’ll watch Baby Blue while you and Jay go out for the evening. Yes, of course I’ll help you with your vocal lessons when you get back. Yes, I’ll sing backup on your new single. Yes, I’ll deal with Solange. Yes, we’ll go dancing later. Yes, you were wrong to kill Sasha Fierce. No, a $2400 cake is not too much. Yes, you look good in that silly knitted dress you wore on GMA. [That’s us getting photographed on stage. I was trying to get away. I didn’t want to dance that morning.] Yes, I’ll be on stage with you next month in New Orleans. All day long she’s texting me for advice. It’s exhausting, you know, but it is a rewarding friendship. We really get each other and enjoy dropping tons of cash every day then yachting on the Mediterranean. I think Jay is jealous of my relationship with her, but he knows there’s nothing to worry about–Bey and I are like brother and sister. We’re songwriting tonight for the new album. She is trying to be super serious, but I keep trying to get a more hip hop vibe. “B’Day 2.0, gurl!” I shout with regularity. She looks pensively at me and nods. I love my Bey.

I’ve never been a big fan of rabbits. I don’t know why. I think they’re fluffy and cute and adorable when they nibble on lettuce. They’re kind of like me. My mother has, ever since I can remember, tried to brainwash me into thinking that they’re scratching monsters who never stop peeing. That might be true, but there is a rabbit in the science class that I go to each day who is a total sweetheart. I could hug him to me all day long. Did you know that you can litter train rabbits? I didn’t and now I need one. 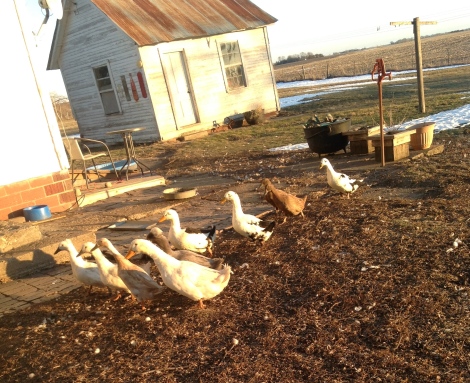 Last spring, we spontaneously bought six ducklings. They were awfully cute and they quickly grew into full fledged ducks. They weren’t inclined to stay in their yard and house, so they roam across the farm in a big herd. It’s amusing to watch, but they can get terribly annoying. Our ducks don’t gently quack, they scream as if being murdered. You can’t walk to the mailbox without being screamed at by their gang. They like to run at you, then they get scared and scream and run away. Watching them eat cat food is particularly delightful, they attack it. I used to be annoyed with them because they pooped all over the bricks I put in place this summer, but, they’re kind of cute.

The English language is becoming rotten. I’m as guilty of this as anybody else, but I like to think that I preserve a bit of the old elegance of chatter. We all talk in slang and nonsense and use the same generic words. We don’t use lovely words like scarcely, or loathsome, or darling, or beau. The word “scarcely” was in a worksheet we did with students the other day and I was surprised but not astounded that not many of them knew what it was. I didn’t think it was an uncommon word at all, but I’m going to start using it every day. If it were up to me, we’d all talk like drunk socialites and flappers from the 1930s. Such descriptive vocabulary!

You know how I’m a huge fan of interior design–especially kitchens. One of my life’s callings is to be a kitchen designer. One trend that I’ve seen a lot is open shelving. It can be beautiful if you have a nice collection of plates and bowls and perhaps some lovely beans decanted into glass jars, but if you have boxes of cereal and maybe a bag of chocolate-that’s not chic at all, that’s downright démodé. 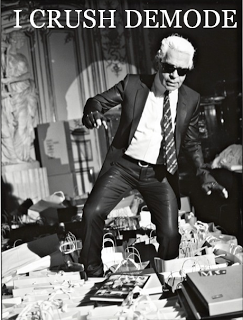 Plus, most people can’t organize their underwear drawer, let alone all their shelves. Plus, open shelving allows dust to settle on our stemware and animal hair to house itself between your plates. A shut door looks much more elegant. To mimic the look, why not have frosted glass doors and maybe one section of open shelving for some cookbooks?

Ice In All Forms:

I do not like being cold. I swear that my blood stops circulating at around fifty degrees and that’s one of the major reasons I loathe winter time. That, and the fact that I can’t go outside to ride my bike, or work in the garden, or tan in the nude on the chaise. In winter, I’m stuck inside, growing a bit fat because I hate walking over to my gym (which has not been gorgeously designed, yet, I’m still in the planning stages of that one, and I’d like to get an elliptical). I have a sunlight now, which helps a lot, but it’s not the same as sitting on the little boardwalk I built and having a leisurely breakfast out with the cats. Last Friday we had a late start due to fog (we need lots more of those. We also need lots more three day weekends), so I had lots of time to get myself ready for work. I slept in, took a long shower, put on some self-tanner, had a couple glasses of tea, I sang Eartha Kitt music, I was in a great mood. Then, I walked out to the car, took one step onto the ice and stared wobbling out of control. I’ve never fallen on ice before. I slammed down onto my elbow and hip and it sucked. I was soaked with melted ice water and I was sore and cut and there was gravel in my elbow. There probably still is. I had to change outfits, which was sad because I was wearing one of my favorite ensembles. I hate ice. I even hate ice in my drinks. The only ice I want is in a margarita. Never blended margaritas, always on the rocks.

For some reason, reasons that defy all logic, some people at work have the air conditioning on in their rooms. It’s winter in Iowa. It’s the middle of January. Yes, global warming is happening, but it’s still freezing. Turn the heat on, make it livable, I’m cold! I walk in and do this:

I’ve been meaning to read this book for years and I’ve been reading it for years since I first started. It switches between mildly interesting to soul-suckingly boring. I have about 40 more pages until I’m done and I could not be any happier! I love reading classic literature, but this one is almost too much for me. Not that it’s difficult, it’s just maddeningly uninteresting. I haven’t seen the show on Broadway nor the film, yet, as I make it a habit of reading source literature before seeing adaptations (so I can learn about them before adapting my own material for the stage or screen. I can’t wait until the book I wrote (that has not yet been published) is adapted for the silvery screen. I’m really hoping for it. I think it will be a delight. It won’t be a blockbuster–not enough sex–but we could add that in. Just had a gross idea I should have incorporated into the book. Maybe I’ll put it in?) Back to Les Misérables. You probably know what it’s about, if you don’t, my summary would take thousands of words. Let me try to shorten it. Man steals bread, goes to prison, flees prison, becomes a mayor, flees his city, adopts a girl in a bar, goes to Paris, becomes a monk(?), flees the monastery, takes his daughter and lives a quiet life in the Marais, daughter meets young revolutionary and they fall madly in love, romance is not in the stars right now, BANG, BANG, stumbling through the sewers, the cop has a change of heart, wedding bells. Exhausting. I don’t understand how it was ever published. If they cut half the drivel out, it might be alright, but even then, I don’t think it’s very interesting. It was fun to read about the layout of Paris and where the characters went because I’ve been to many of the places. At one point they mentioned the rue Saint-Sabin where I lived. That was cool. Then, the wedding between Marius and Cosette (revolutionary and daughter) takes place at the Church of Saint Paul, which was right around the corner from another of my apartments and where I’ve often wandered around. Gorgeous church. I’m going to try and finish the book this weekend and then brag about having read it. I think I’ll avoid Victor Hugo for some time. Let’s just watch Susan Boyle together and cry instead of reading this. I always cry a little when I watch her audition. Can’t help it.