I enjoy Frank Morgan. It’s always strange to see him in roles that aren’t the Wizard, but they’re usually good. They’re all the same role, too, it seems. He’s a bumbling, lovable, old man. Nothing new here. In this film, he plays an old ship designer who has a weakness for investing his family’s savings in real estate ventures that never seem to pay off. Fortunately for him, he is in a deal right now that is going to pay handsomely. Unfortunately, though, he just died. He doesn’t realize it at first, so it takes his dead father coming back from the afterlife for him to understand. He wants to take his son to Heaven, but Frank’s character has a few things to do first. He wants to make sure his daughter is happily engaged to a researcher and his son follows his dreams and moves to England. He also needs to make sure that his business partner remains honest and gives his wife the $5000 check that he is owed from his good business deal. It sounds rather trite and unsubstantial, but it was a rather charming picture. I rather enjoyed it. [My Rating: 7/10]

The DVR guide said this movie was about a squirrel’s secret stash of cash. How could I not tape it? It was way more of a children’s movie than I expected and it wasn’t even a real squirrel and the squirrel wasn’t even the main point, but it was still a cute movie. It was about a family of once famous circus performers who haven’t anything but their clothes. They meet a friend who tips them off about a cheap apartment for rent and they take it on. The mother prays for a miracle because her daughter needs shoes, and then money falls to the ground. She assumes it was divine, but of course it wasn’t. The landlord had been stuffing cash in a hole in a wall because he doesn’t trust the bank. The squirrel lives there and he throws money out for fun. It was weird and doesn’t sound that great, and it wasn’t, but it was an okay movie. The circus family gets rich, of course, and the Internal Revenue Service gets involved and the government tries to ruin everything. It ended well enough. It would be a Christmas movie. [My Rating: 6/10]

I’ve always meant to read this book as I enjoy the work of Colette. I revisited her tomb a few months ago. What a lady–do read about her, she had quite an extraordinary life. I’d like an extraordinary life. I need to work on that. This film is about a young girl being trained as a courtesan by her aunts, but she finds it loathsome. She’d rather spend her time with the handsome Gaston, whom she thinks of as an older brother. Before long, they realize that they have more than friendly feelings betwixt them (don’t you just love the word “betwixt?” I do), which is awkward because she is so, so young. There is a vacation on the beach and a social scandal to deal with before we get to the romance, though. Gigi doesn’t want to marry Gaston because she thinks that the life he will provide her will be the one that her family has trained her for. Gaston doesn’t want that at all, but it takes her awhile to realize this before they are happy. They have a scandalous dinner at Maxim’s, which made me wonder why I’ve never eaten there. It looks divine and still has the same design as it had in Belle Époque Paris. Putting that on the to-do list for next time. Additional good things it had going for it were Louis Jourdain and the fact that it was a musical. I adore a musical. Quite fun. [My Rating: 9/10]

Dreadful, dreadful, dreadful. Whoever thought this was a good idea was probably the same mastermind [sarcasm] behind that latest Disney action flop, John Carter. I never would have watched this one if it weren’t for the fact that we watched it in Social Studies class for the end of our Mesopotamian unit. It was so bad! Why was Jake Gyllenhaal talking like he was an inbred member of the British aristocracy? I couldn’t help laughing. He looked nice without his shirt, and that was the only good thing about it.

It was about a magical dagger and a princess and an idiotic plot about turning time back time to stop a hostile takeover. Yawn. [My Rating: 1/10]

I adore movies that are under an hour, I think we should have more of them. Maybe double features in cinemas–I think that would be fun. You could see two totally different movies. Maybe a drama and a comedy combination? We should do this. Call me, Hollywood. They won’t, they’ll just steal my ideas and never give me credit. I’m used to it now. Whatever. This was a light romantic comedy about a young man who falls instantly in love with an ambassador’s daughter in a Central American nation. It wasn’t very good. I only taped it because the male lead was Joan Crawford’s first husband, Douglas Fairbanks Jr., and I do enjoy his work, but his was not the film for him! The daughter is engaged to a rich man who has agreed to the marriage because he wants the young daughter and her father agrees to it because the dowry will cover his debts. Douglas decides for the daughter that she doesn’t want this marriage and sets out to end it. An hour was almost too long. [My Rating: 2/10]

Another light comedy starring Douglas Fairbanks, Jr., and this one was much better. Loretta Young stars as a very wealthy heiress who is left a considerable sum by a dead relative. She doesn’t care much about money or furs or real estate, though, so this isn’t much of a deal for her. There was a stipulation in the will that says that she must marry a gentleman that her family approves of to inherit. She was rightly annoyed about this, but then I didn’t understand why since she proclaimed to have a distinct disinterest in money. Another stipulation for all inheritors is that there must be no scandal in the family. To be annoying and rude she decides to cause a scandal by posting a newspaper advert asking for somebody to come scandalize her. She gets a nice fellow who doesn’t have a clue what he’s doing–Douglas, and they unexpectedly fall for each other. The family doesn’t approve, of course, but her spinster aunts inadvertently aid their romance by getting drunk at a nightclub. It wasn’t a great story, but it was amusing. [My Rating: 5/10]

December 14: The Garden of Allah 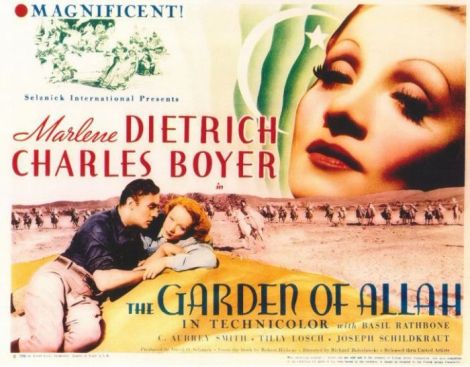 The Sahara + Marlene Dietrich + Charles Boyer = all kinds of YES! Marlene is a wealthy, lonely young woman who is looking for something out of her life. She doesn’t know what to do with herself or where to go or whom to be with. A nun acquaintance of hers suggests she go and spend some time in the desert. This is a completely unreasonable suggestion, but one that is never questioned. (As I look back on the film, it’s quite a ridiculous romp, but at the time I was taking it seriously.) So, she hops on a train and heads off. In her carriage is gloomily handsome Charles Boyer. He seems to have something on his mind. He does. He was a monk until a few days prior when he abandoned the monastery that he had so happily lived at. He, too, wanted something more out of life and had to try to find it. They meet again and fall in love. They have a passionate romance and before too long find themselves happily married. After this, they head out into the desert with a small crew and what seems like a hundred exquisite dresses for Marlene to wear. While out in the desert, they come across a Count who seems to know something about Charles’s character. It’s only vague and not much, but it troubles Charles awfully. He had nearly forgotten that he had run away from his vows and this fills him with guilt. Finally, it’s revealed to his wife and, because she herself is deeply religious, agrees that that he must return to his simple, happy life. I didn’t agree, but I didn’t write it. There is a scene in the sand dunes as the sun is setting that is awfully beautiful. Nobody would ever speak the way they do to each other, it’s sappy and dripping with romance and sadness, but I was in a romantic mood when I was watching it and I found it moving. Both of them were so beautiful. Very soon after, they rent a coach to take them back to civilization and finally the monastery. There, they tearfully part. They both will love each other until the end of their days, and in another life it would have been wonderful, but now it was not meant to be.

Tragedy. Do see this one. This is a movie that I think would make a wonderful remake. This is not something I say lightly! [My Rating: 10/10]

FILM of the WEEK: The Garden of Allah An early technicolor masterpiece and awfully good, too.