Holla, Flock. Please stand up, open your hymnals, and sing along to our dear, beloved Beyoncé as she performs “Standing on the Sun” for your religious ecstasy.

I’ve now been a reverend for a week and it’s been hella fun. More so because I just got news that the awful Proposition 8 has been murdered by the Supreme Court, much like Amanda Bynes wanted Drake to murder her vagina, but then she changed her mind and called him ugly and then she said that he had Down Syndrome.

Your beloved reverend has decided that Amanda Byne’s recent bizarre behavior is nothing but the most genius marketing ploy of all time. When was the last time that you thought of Amanda Bynes? Probably when there was a She’s the Man rerun on basic cable or you suddenly had the urge to watch one or two (or every) Judge Trudy segment from The Amanda Show. (‘Manda, ‘Manda, ‘Manda, ‘Manda, ‘Manda SHOW!) Now she’s popping up everywhere with that wonderfully bad wig and causing confusion in her wake. She’s in New Jersey, she’s in Vegas, she’s in a gym, she’s at the mall, she’s at the plastic surgeon. It’s divine!

I can only hope that she decides to make a trip to Los Angeles while I’m there next week for the month.

You read that right! I’m one week short of staying in California for an entire month. Oh, the eleganza is expensive, flock, send tithes. I’ll be in LA from the 3rd to at least the 22nd (CALL ME MILEY, WE’LL TWERK ON VENICE BEACH!) Speaking of Miley, I am elevating her to sainthood for her wonderful new style.

All those white shirts and bleached hair and baggy pants. Loves it. She’s become a young Gwen Stefani. It’s time for our second musical interlude. Hymnals out, flock, rise up and sing along to “We Can’t Stop.”

That song was the perfect interlude to this week’s sermon, which I was trying to start above, but I’m so easily distracted. Proposition 8 has been terminated. It’s gone. It’s done. It’s dead. And an almighty HALLELU was heard by all. It was a ridiculous piece of legislation and I can’t believe it’s been hurting people’s lives for so long. I remember watching the election results slowly trickle in years ago from my very far removed farm in rural Iowa and dramatically gasping in horror as it became evident that the people of California had voted to ban same sex marriage. I’m firmly convinced that most were confused. Is there a gayer state than California? I don’t think so. Well, New York is surely tied and Iowa has always been an unlikely beacon of liberalism. So, Iowa, New York, and California are the gay states.

We’ve been shaking our heads at the ridiculous idiots who try to ruin lives with the Bible. Read the Bible all you want, I don’t mind. Highlight passages you find meaningful. Enjoy yourself. There are some good stories in there. I know. I’ve read it. Most people who scream and shout with it, well, they haven’t. Funny, that. I’ve long taken issue with organized religion — except this one, of course, send tithes — because, let’s be honest, it’s really just a magic show except there’s never any magic. Religion has helped people and I’ll never deny that, but it’s hurt so many. Crusades, anyone? The war on women? Contraception a sin? I mean, come on! Plus, the old Pope wore amazing outfits and great shoes in a marble palace while his worldwide congregation suffered from famine and disease and so much more. Have you ever been to the Vatican? Your reverend has. After admiring the art and the architecture and all, you’re left with a nasty feeling in your stomach. There is so much money in the Vatican that stays in the Vatican. I read that it only takes a few billion dollars to keep hunger at bay worldwide for a year. A FEW BILLION, flock. That’s pennies in the global economy.

How did I end up on starvation? I just wanted to celebrate the destruction of Proposition 8 and the implosion of DOMA. It’s over, flock! Marriages in California should resume soon and I can finally marry Zac Efron. Wait for it…bear with…bear with…bear with: 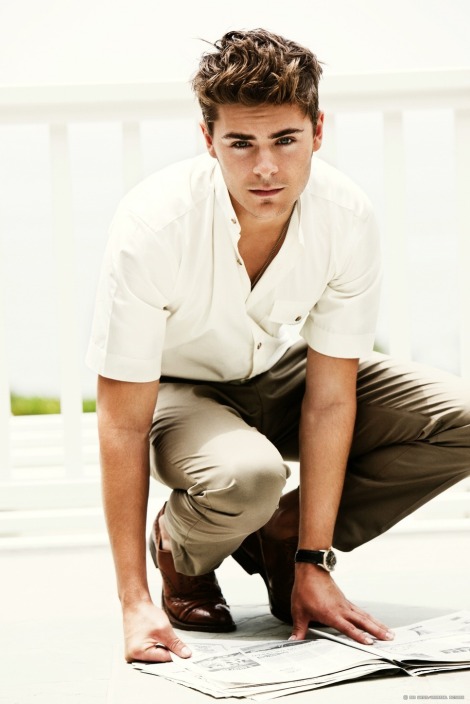 It’ll happen, flock, stop your scoffing. You’re all invited. (Those of thee who hath sent tithes merit priority seating.) Also, since I’m an ordained reverend, I’ll marry any of you that want it whilst I’m in Hollywood. Can we rent out the Hollywood Bowl and have a mass wedding? Shall we crash Extra in the Grove? My apartment is quite near there. You let me know. Let’s tweet about it. (@bdphillips) Speaking of tweets, I need you to all start using the following on the Twitter: #bengoestohollywood. Alert the media, flock!

So, I’ll amend last week’s instructions: adopt kittens, be kind to people, visit a tailor, and marry homosexuals. (You can still hug them, but give them a ring, too.)

Close us out, Cher:

If I squint my eyes and pretend, this could be sunset in Luxor from Hassan’s roof. Exactly the same colors. #¯\_(ツ)_/¯ #sunset #iowa #orisit?
Pretending I’m under a jacaranda tree in Mexico City.
MailCat in his party collar. I love him so much. #¯\_(ツ)_/¯ #cats #blessed
MailCat moved in last night. WELCOME HOME MI AMOR! #¯\_(ツ)_/¯ #cats #blessed
#confession: I’ll miss self-isolating someday when this is over. I’m having a truly fantastic time. #¯\_(ツ)_/¯ #confessionsofanheiressbyparishiltonisCLASSICLITERATURE
Before/After #robins #birds #springtime #ipaintedmydoorthiscolor #¯\_(ツ)_/¯