I never really put much thought into San Francisco. This trip has always been about going to Hollywood and becoming a beloved celebrity. That didn’t happen, of course. I feel I was on the verge, but that’s only in my mind. Hollywood certainly was not for me. Too dirty and there was nothing beautiful about it. The park that I lived by was hideous. There were no massive public works, no sentiment of goodwill, the people were all vaguely threatening for various reasons. It just wasn’t right. It was basically the polar opposite of Paris. I’m glad I went to discover this or else I would have spent more time falsely daydreaming about how wonderful it would be.

Pam and I walked around San Luis Obispo for the afternoon before my train was scheduled to depart and had a nice time looking in at little shops and having lunch at a coffee shop. I had mushroom stroganoff for lunch, that’s always one of my favorites. I haven’t made it in forever. I should fix that. I ordered an espresso later and they gave me a shooter of club soda with it. I don’t know why, but took it as if I knew what it was there for. Was it a palate cleanser? Was it a mixer? How would that work? I’m so confused.

I liked the inside of this mission. Charming details on the walls. 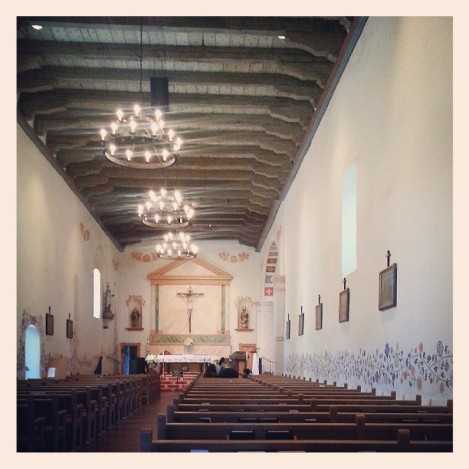 I was not nearly so charmed by this odd little thing called Bubblegum Alley.

For reasons I cannot even begin to understand, peasants have been sticking their chewing gum onto the walls of this poor little alley and covering it with their dried syphilis. (WHY CAN I NEVER SPELL THAT?) I refuse to understand and choose to ignore the presence of this place. Why would a person chew gum anyway? Gross. Très démodé.

Before it was time to head over to the station, we popped by a little bakery where I procured a tart and a chocolate macaron. The macaron was one of the better ones I’ve had in America. I think I’ve eaten a hundred shit macarons and four good ones in this country. (I’m not including my own, of course, since aside from Pierre Hermé, they are the finest in the world. Oh, I miss you, Pierre! I shall return soon.)

Pam and I said goodbye and I was soon on the train. I took an immediate dislike to my seat mate, which was a poor judgement — as first impressions so often are — because he had severe halitosis. Gurl, I could not breathe! So, I grabbed my laptop and hurried down to the cafe.

I loved the cafe car on the Southwest Chief, the train that took me to California, but I was not nearly so enamored of the cafe car on the Coast Starlight. The guy at the counter was a control freak. He kept shouting to people to sit more than one to a booth! What did he expect us to do, socialize? Please! We had cell phones to look at.

Eventually, I fatigued of being shouted out, so I invited an ancient lady to sit down next to me. She was named Lucy, had moved to California from New York City in the fifties, and was very, very, very, very drunk. I liked her.

“What, what…” she grimaced as she looked at me typing, “What is that? What’re you doing?”

I explained that I was writing a blog.

I explained what a blog was and she seemed intrigued by this.

“You should write a book.”

I said that I would.

“Put I Love Lucy in your book.”

I didn’t know why I would do this, but I nodded and put my things back together to head up for my dinner reservation.

Annoyingly, dinner plans were messed up for a bit when some idiot decided it was a good idea to smoke somewhere on the train. This immediately shuts the whole thing down and calls the police…in the middle of nowhere…it also cuts the power. We were quite delayed for some time, but finally dinner came around.

My seat mate had the same reservation as I, and since you don’t get private tables on the Amtrak, we were seated next to each other, which wasn’t awful. He was actually very interesting. He was a professional diver and I was intrigued by this, since I’ve always planned on going diving in the Mediterranean outside of Alexandria and looking at all the ruins that have fallen into the sea over the centuries.

It wasn’t much longer until I was in Oakland, which everybody tried to make me terrified of. Thankfully I wasn’t leaving the station, so I didn’t really worry about anything. The only thing I worried about was finding the bus that was to take me into San Francisco to Fisherman’s Wharf. There were no employees that I could find, it was quite dark, and it was awfully creepy for some reason — a chill in the air — but I finally found the bus and got on board.

As you may remember, since I never stop talking about it — I HATE BUSES. This one was no different. I wouldn’t even like being on a tour bus. Get me a tour train, please. There’s just something about them that repulses me. I don’t know what or why, I just don’t want to have anything to do with a bus. NO!

I didn’t know how far we would be driving since the driver was awful and didn’t say anything, just took off. For all I knew, I was on a bus to a boat to Alcatraz. So, I got out my phone and watched the map as we went through Oakland. We were getting ready to cross over the bridge — not the Golden Gate, the other one — so I put this song on:

Then we were on the bridge and there were lights on the support beams and then I looked out across the bay and saw the city and fell in love, madly and irrationally in love. You can’t explain love, you can only feel it, so I won’t even try. The skyscrapers twinkled merrily and were reflected on the rippling water we were crossing over. There was a massive sign advertising Ghirardelli in old-fashioned lights. Everything was perfect and I felt at home — that feeling that I look for and so rarely find when I travel. I hadn’t stepped foot to pavement, yet, and I already knew that I was going to have a wonderful time.

Soon, we pulled up to Fisherman’s Wharf and as soon as I had my bearings, I felt as if I had lived there all my life. The air was cool and crisp and oddly, I didn’t mind for one second. I loved the buildings and the way it felt there. I easily found my hotel on Lombard Street. Check-in was a breeze and I even loved the well-worn motel. There were glass cups and a massive bed and a good Internet connection and a window that opened.

I sighed happily and luxuriantly and drifted to sleep, excited for the day to come.

I didn’t take that picture, but it was just like this. Wonderful.