Today we had tickets to go to an exhibit and lecture at the British Museum about the subject dearest and nearest to my heart: ANCIENT EGYPT. Betwixt these lovely events, I planned a delightful number of excursions, which were all successful, but each of them infuriated Jessica. She gets like that sometimes.

For breakfast, I thought we should visit Le Cordon Bleu’s campus here, since it was recently refurbished and is supposedly beautiful. I enjoyed the one I attended in Paris, but it wasn’t exactly gorgeous. And we didn’t have a café there. Here in London, the students run a café, which sells the things that they make in class and on a schedule, which is a fabulous idea. One thing that is infuriating about pastry school is you make massive batches of cookies or tarts or huge cakes in class and then you take them home. This is too much for one human to eat. I don’t know how many cakes I had to let go to waste. If we were baking for a shop and taking home a reasonable number, that would make so much more sense. So, I was thrilled to see this operation firsthand. 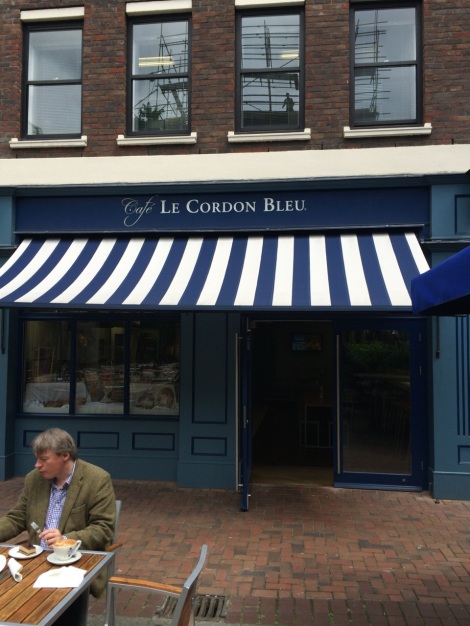 We didn’t find it at first, but it wasn’t terribly hard to find and we were soon sat outside waiting for our order to arrive. I had a bowl of tomato soup, an espresso, and a passion fruit macaron. 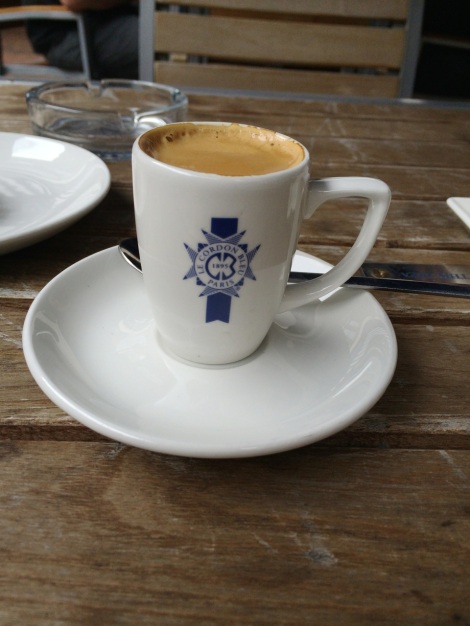 The soup was good, but nothing to write home about, and the macaron was rather lame. But, that espresso…that espresso may have been the finest espresso I’ve had in all my life. I’ve had a lot of espresso, too. I’m basically a master barista back home, but nothing I’ve ever pulled has ever tasted like that. I’m going to have to find out what kind of beans they use. It was phenomenal. Go for the coffee, reader!

The British Museum was stuffed to bursting, but the exhibition we were going to was ticketed, so there were sure to be fewer idiotic tourists in there. (I never think of myself as a tourist, by the way, I wonder why?) We hurried right in and I lost my shit when I saw a picture of Margaret Murray in her youth.

This is so very important to me. She’s a major character in a novel I’m writing and it was so amazing to see her looking up at me.

The exhibition itself wasn’t all that grand — I’ve seen a hundred things like this in various museums around the world. It was a collection of eight different mummies with their stories figured out and put on display. It was very well put together and if you don’t already have an encyclopedic knowledge of ancient Egypt and mummification practices, I’m sure you might find it engaging. We had more fun mumbling curses from The Mummy at the various mummies and suffering actual disappointment when they didn’t come to life.

Us every damn day:

The exhibit didn’t take long, so we went over to the Grant Zoological Museum, a place Jessica had wanted to see. It’s in the campus of the University College London, which I’m fond of, so I was thrilled to go. If I ever have the chance to study Egyptology abroad, it would be here…or in Cairo. There’s a charming museum at the university called the Petrie Museum of Egyptian Archaeology that is worth a wander through. The Zoological Museum was small and perfectly creepy with taxidermy animals, skeletons on display, and a wonderful number of jarred specimens. 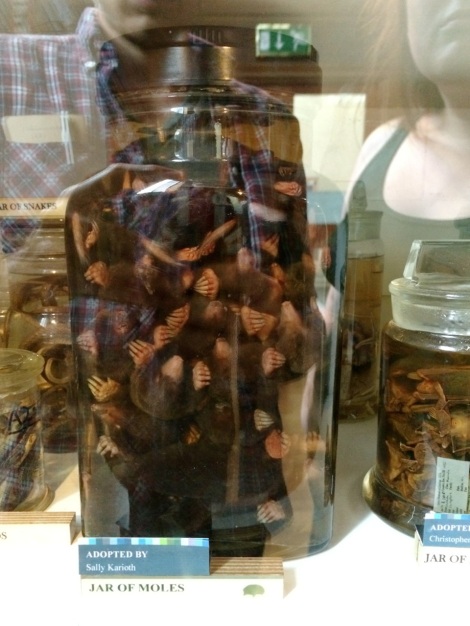 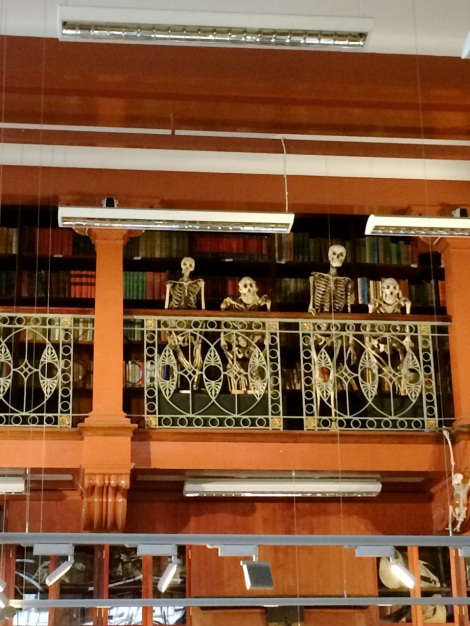 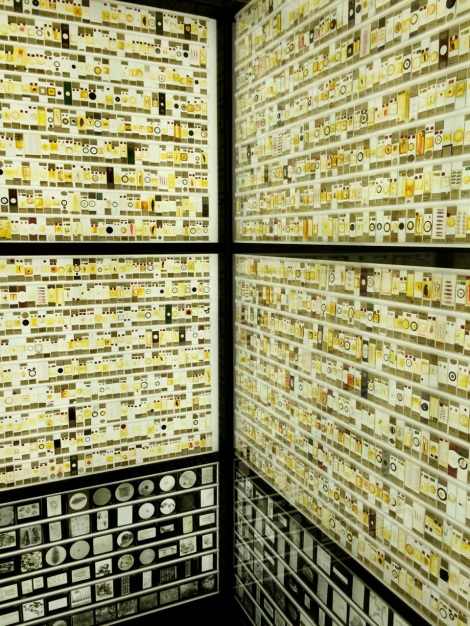 We were terribly peckish at this point, so we stopped at a little Italian café across from the British Museum and had a reasonable lunch of pasta and salad. It was clearly a tourist restaurant, so it was nothing exceptional, but it was filling. But before we ate, we appreciated the architecture around the area. Well, I did, Jessica mainly grumbled.

I though that we might have fun walking along Regent Canal up to Camden Town to see the house where Amy Winehouse died, so we headed off to Warwick Avenue, where I promptly burst out into song.

The area was absolutely beautiful and we soon figured out how to get down to the canal. Jessica absolutely loathed every minute of this. I’ve never known somebody so averse to being out in nature as my sister. I had a marvelous time walking through Little Venice and wondering what life would be like living in a houseboat. Some of them looked derelict, but others were very nice and I imagine they’d be enchanting places to live. I’m going to have to look into this.

Jessica made sure that I knew how much she loathed every step of the walk along the canal. She made sure I knew every few seconds how unhappy she was. I wish she would have just calmed down and enjoyed the view, but that’s not in her nature. She was even unhappy when we walked past the zoo and she loves zoos.

By the time we made it to Camden Town and had ordered delicious drinks at Starbucks, there was no time left to go to Amy Winehouse’s house, so we made our way back to the British Museum for the lecture on ancient Egyptian art. 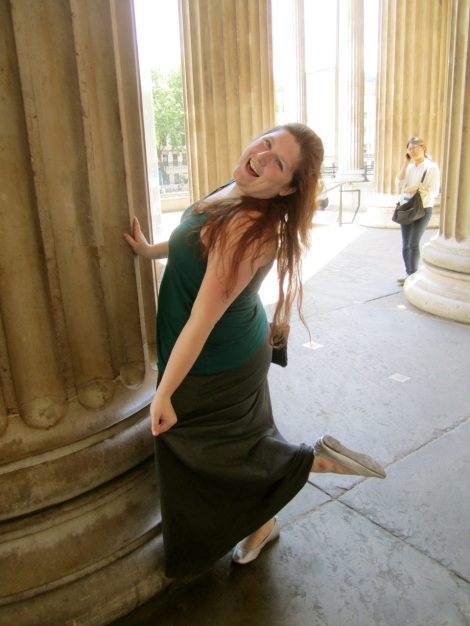 This should have been more fun than it was, but the speakers were not a good match. The interesting one, Marcel Marée, is the curator of the British Museum’s Egyptian wing. (I applied to be his assistant last year, but was turned down. RUDE.) The other guy, the annoying one, Alastair Sooke hosts a history show on the BBC and he was dreadful.

He kept trying to outdo Marcel and Marcel didn’t care and I just wanted to hear Marcel talk. Sadly, the thing went on for ages and Jessica fell asleep and when they opened the floor up to audience questions, it was even worse. The people were either total idiots or incredibly pretentious. I hated everybody there…aside from the guy that looked like Zayn Malik.

Finally it was over and we had a few minutes to run through the museum’s exhibits, which further pissed Jessica off. She was even less happy when I told her that we were returning to Camden Town so that we could see Amy’s house. I didn’t plan to do this for two years not to do it, though, so off we went.

The house where Amy Winehouse died. I had to try very hard to not burst out in song.

It was a bit tricky to get to, but we did finally find Camden Square and were appropriately sad in front of Number 30. I really wanted to sing, but I successfully fought the urge. Let’s sing now:

We skipped back to the Tube…well, not so much skipped since our feet were aching…and made our way back home.

3 responses to “LONDON: Jessica Is Pissed (Mad Not Drunk)”