I had great intentions of waking up early and packing and making my rounds and saying goodbye to everybody, but then I realized I would have to be conscious at the hotel for longer than necessary, so I slept in. I don’t regret my decision at all. I was thrilled to be on my way out of there to a new place — a five star hotel where kings and queens and presidents and all sorts of celebrities have paraded through. It would be a great change from the hovel I’ve been squatting in for the past five days. That’s what it was really, it was a tremendous disappointment. I can’t understand all the positive reviews they have.

When I was finally ready to leave my bedroom — not that it was any better than the rest of the place, it had air conditioning, though, at least — I made my way to the roof and had more of the same conversations with Lou and Nels. It’s amazing how you can talk and talk and talk and really not say anything at all. Later on, I woke Melony from her nap so that I could say goodbye.

She seemed glad to have a break from her endless boredom, too, so we went up to the roof for an hour. It was hot, but it was a nice change of scenery. We gabbed and she’s really such a lovely woman. When she returns to Australia after finishing what she needs to do in Cairo, she is going to email me a reading. I look forward to that. I’ve always wanted to have a psychic reading. She even said that I was one of the people she was supposed to meet for her quest to come true. I don’t know if that’s true, but it’s a terribly sweet sentiment.

Finally, one o’clock came around and Ibrahim arrived with the car. I was glad to see him again as he’s truly a gentleman and never tries to hassle you about anything. He just wants you to enjoy yourself.

He spent the drive to the airport teaching me how to order a shisha pipe. I never intended to order one, but now I know how. Apple is the best one to order, I guess, as it’s very smooth and doesn’t make your lungs feel heavy. I’m not entirely sure what the point of this practice is. Is there tobacco in one of those water pipes? I’ll google this later when I have some decent Internet — something I haven’t had since France. It’s been dreadful, reader.

The trip to the airport was easy and getting to my gate was the simplest thing in the world. It was so easy that it made me suspicious. As I was getting myself oriented, an overly friendly guard took my bag and walked me through security. Of course, he demanded baksheesh (a tip.) I sighed and gave him something and got rid of him. Before you get your ticket, you go through security, which was nothing more than walking through a metal detector and placing your bag on a conveyor belt. You don’t take out your computer or your liquids or remove your shoes. It was strange and like living in a pre 9/11 world.

I had loads of time to wait, so I sat in the lounge for two hours, writing my blog. I was sick to death with boredom before long, so I went and had a decent and overpriced coffee. It was nice to have something that wasn’t Nescafé. That stuff serves a purpose, but it’s not quality.

I assumed when I went to my gate that I’d have to go through a real security, but when I went through, it was the exact same process. You just walk through. I looked around in bewilderment and joined the other passengers.

The flight was delayed by about a half hour, but I made friends with a lovely old lady from the UK who had been going to Luxor all her life, so it was a nice to chat with somebody who knew what they was doing. It was certainly a relief to me. Finally the bus came and drove us to our airplane.

We soon took to the air and drinks were served and I was thrilled. I’ll be glad to be back in America where you can drink all the tap water you want and not risk death! The flight lasted less than an hour and I was soon through the terminal where I met my chauffeur, Hassan. He runs a private taxi company and is a charming young man. There’s no hassle, there’s no pressure, there’s just a drive. It costs more, clearly, than catching a cab, but there is such peace, which is absolutely worth the price.

I was charmed by Luxor immediately. It’s quieter than Cairo and the driving is not a manic maze of donkeys and camels and cars and buses and everything else. Flowers and palms flourish all over along the road and you can feel a bucolic calm out in the outskirts of town. The air is clean and clear and I knew that I was in the right place for me.

When I made it to the Winter Palace, I was absolutely sure that I was in the right place. It’s a palace, really! I had reservations at their more modest Pavillon hotel in the back of the property, which was just fine with me.

I was asked to sit down and fill out the checkin papers in the Palace’s huge lobby. It’s filled with antiques and art and it is absolutely stunning. The spiral staircase winds up all three levels and is made of marble and gracefully formed wrought iron. I was in love immediately. As I was putting my information down, an attendant brought me a glass of hibiscus tea, which was delicious. I about burst into tears, reader. I was paying the exact same price as I had been back in Cairo. Why had I put myself through it?!?! I was so glad that I would be able to wander around here!

The woman at the front desk brought me my room keys, which weigh about ten pounds and are made of solid brass. Engraved on the big keychain, the words WINTER PALACE were proudly displayed.

“I’m at the Pavillon, though?” I said, taking the keys greedily.

“Yes, sir, but all guests have been moved to the Palace.”

This is exactly what I had read about online, but I never thought it would happen to me! I asked around later and found out that the Pavillon is closed right now because there are no tourists at all. Like, there is nobody here. It was basically burning money, so the third level of the Palace is temporarily the Pavillon. I had no complaints and gleefully floated up the stairs past the Egyptian relics and various paintings of Lord Byron.

I opened the door to my room and could hardly believe it. It’s almost too beautiful. The ceiling is easily fifteen feet high and is beautifully molded. The bed is covered with fine cloth. There are marble-covered tables all over. The bathroom is about the size of my bedroom back in America and is solid fine stonework. I don’t think it’s marble, but it’s gorgeous. There’s a balcony overlooking the gardens, which are absolutely stunning. 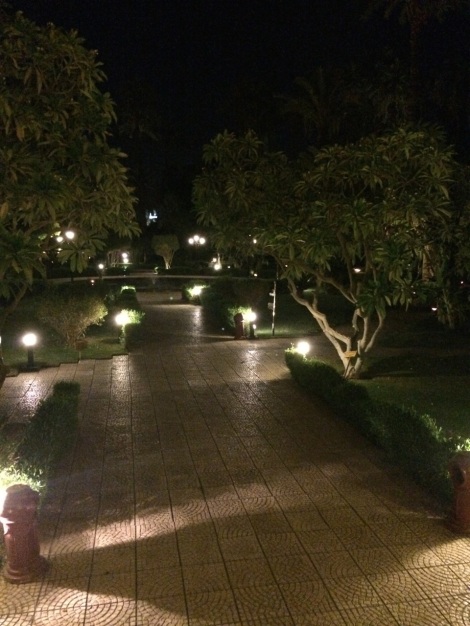 I put my things down, freshened up and hurried down to explore the gardens. They were just as amazing as my dreams of them had been. It’s seclusive and calm and perfect. Fountains and little pathways are all over. The pool is amazing — if only I had brought my bathing suit! There is a little spot to smoke shisha and a bar for an evening drink. There’s a restaurant out there, too, but I didn’t find it in my preliminary search.

Back in the lobby I chatted with my family over FaceTime and met the newest member of our clan, Scallion:

He seems pretty sweet, but I can’t convince Jessica to change his middle name from Ramsay to Ramesses. In time I’m sure I’ll succeed.

I was starving to death, so I went down to the hotel restaurant, The Corniche, which is the very definition of Old World elegance. Plush velvet chairs and worn china with the hotel logo are all over. I was in heaven.

I ordered a most delicious salad that was made of halfway dried tomatoes. I will be making these when I get back home. They have the consistency and intensity of meat, which was alarming at first, but I quickly got into it. They were so good! My second course was a kind of roasted ratatouille, which wasn’t a triumph, but was rather nice. I even ordered an opera cake for dessert. I was hungry, so I went a bit overboard. I don’t regret it. Still, it was twenty-five times more expensive than the falafel dinners I’d been having back in Cairo. I’ll do better later. Maybe…I’m a sucker for elegance.

There was no wifi on the third floor, so I called down to inquire about this. They have it in all public areas, so I had to go down to the lobby to use it. Later, they kindly hooked up a connection on my level. The wifi is usually awful, but it’s better than nothing, and it’s the kind of treatment you expect from a world-class hotel.

Speaking of that, do you know how much I’m paying every night here? This is a five-star hotel, mind you. Guess. What did you guess? Comment below! Anyway, I’m only paying $40 a night. I KNOW! I can’t believe it. I checked into the prices of the room back before the revolution when tourism was still flourishing and nearly choked on my elegance. Back then, the rooms were going for FIVE HUNDRED EUROS per night.

I laughed myself to sleep.