STAND UP FOR THE NATIONAL ANTHEM. HAND OVER HEART. HATS OFF!

I’ve spoken of it before, but I’m always thrilled and delighted by how easy it is to wake up in California because my body is used to it being two hours later than it really is. This is just the perfect time difference. Paris and Cairo are many more hours ahead, so they are more difficult to adjust to when I travel, but this is just right. So, when the morning arrived, I was up and ready for the day long before I would have drug myself out of bed back in Iowa.

Today I decided to start with a hike in Runyon Canyon, a tradition of mine. I go every time I’m in Los Angeles, and it never fails to delight me.  I wasn’t wrong this time, either. (That’s a joke you’ll get in a bit.) The views are delightful, the hike is nicely strenuous, and you feel so wonderfully accomplished when you make it back to the bottom. The canyon seems to be steadily gaining in popularity, too. The first time I was on it, we’d go for some time before bumping into other hikers, but now you have to dodge joggers and forty-thousand pit-bulls. It was probably just because it was the Fourth of July, but it seems like everybody’s there. I am constantly seeing celebrities posting pictures of their hike through the canyon.

Jessica didn’t think it’d be a problem to do the hike at all, and I admired her strange confidence. We all told her it could be a bit much, but she was assured that she would be absolutely fine to walk up and down. Her opinion quickly changed when she arrived at Fuller to begin the ascent the entrance. It was a steep climb and it was quite strenuous in itself. I could have used a water at the top of that. I watched in alarm as she grew more and more unhappy, but she consented to continue the hike. We made it up about a third of the way before she started wheezing so much I thought she was going to die. Then she burst into tears. I was overjoyed. Everything goes wrong with Jessica. It’s like clockwork.

So, she turned back around, and I carried on to the top. It was a beautiful day and I thoroughly enjoyed the climb, though I was concerned that she was dead somewhere. There was very poor cellular service, but I was confident that somebody would call her an ambulance or an emergency helicopter should they find her lifeless body alongside of the walking trail. 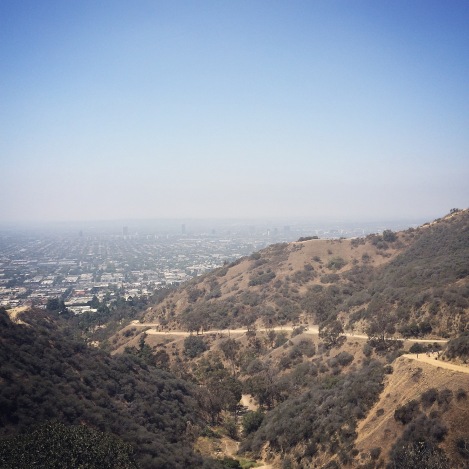 Not too much longer I turned to my right and I SAW THE HOLLYWOOD SIGN! 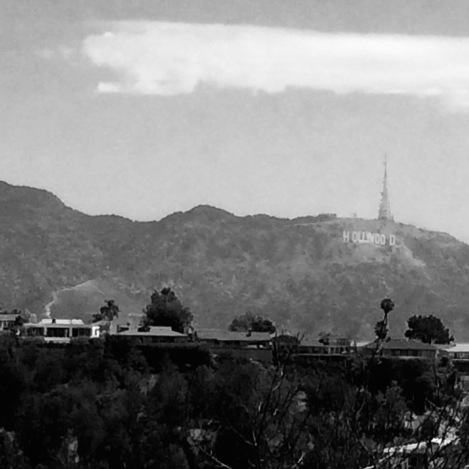 This is all so crazy! Everybody seems so famous!

Ready to turn around and make my descent, I did something that still puzzles me; I ran. People were doing it all over, which concerned me because it seemed awfully dangerous. Why on earth would you want to run down a steep canyon when you could easily slip and careen off into the unknown? Where you would fall and meet rattlesnakes, black widows, and a certain death? But still, I ran. I ran from the very top to the very bottom. I wanted to stop the minute I started, but that is not nearly as easy as it sounds. The incline was dramatic, so I would have skidded to the pearly gates if I had tried to slow myself to a walk, and I was bound and determined to run further that the annoying guy who was right behind me. I did so, I felt thoroughly accomplished, and I am quite sure he is still weeping about the fact that I DESTROYED him. In the process, though, I destroyed my legs. It took four days for them to feel like themselves again. It was totally worth it, though, because as I gloriously streamed by the hikers, I heard one woman say as she pointed at me, “Honey, you know who that looks like?” I WAS MISTAKEN FOR A STAR. I beamed radiantly.

Jessica, miraculously, hadn’t died and had found a place to sit and wait for me. I was pleasantly surprised that she was alive. It didn’t look good for quite a while. I think asthmatics have an easier time breathing than she did huffing up Runyon Canyon. She was also alarmingly red. I thought that was just her exhaustion, but I should have known better. I don’t really burn, so I didn’t concern myself with her skin. I’m not my sister’s keeper after all, she is supposedly an independent lady who is capable of taking care of herself (though this is a topic hotly debated amongst friends and family). 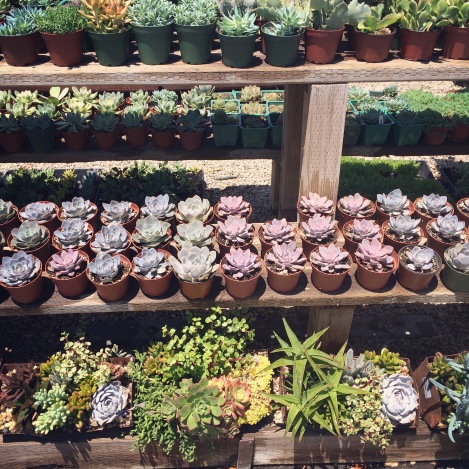 After tidying up and allowing Jessica to feel like a functioning human once again, we headed down Beverly to have lunch at a bakery that I like called Susina. I go there for pastries, and I never realized that they had a lunch menu. Jessica was thrilled at the prospect of ravioli, so off we went. Along the way is the Buzzfeed offices, so she peered intently though the windows and doors in search of somebody called Keith. He is one of the people who makes videos for the website. Basically my perfect job. I’ve always thought I would have a great career at Buzzfeed. I’d write articles like: 27 Important Sphinx Kittens, 44 Harry Styles Gifs Guaranteed To Give You Life, and The Greatest Pupusas in America. Clearly, I’d be a roaring success. How could I fail with such accessible articles and such a great sense of humor? 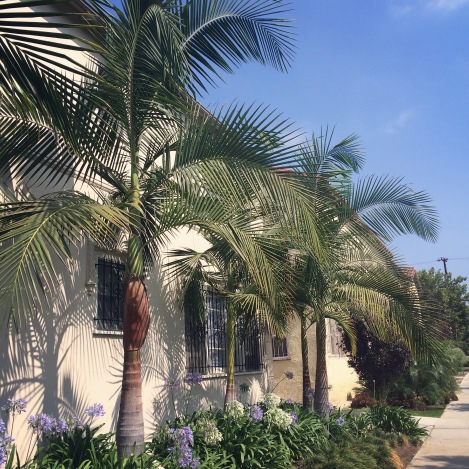 Susina wasn’t far off and it wasn’t quite what we had expected. They have food, certainly, but it was served to-go. They do have a certain number of items in the display case that are available, and I had a wonderful beet salad with hazelnuts and gorgonzola cheese. And a Diet Coke in a bottle! I never knew it was available in a bottle!  Jessica was apocalyptic about the ravioli situation, and angrily bit into a meatball sub that failed, like most things, to please her.

As we sat and scrolled the Twitter, we discovered that Harry was also eating lunch in Los Angeles. We nodded in feigned amusement. Nobody was sharing his location, so we walked down to see the house where the exterior shots for What Ever Happened to Baby Jane were filmed. In retrospect, this was a terrifically bad idea for a number of reasons. To begin with, Jessica’s skin was frying more and more by the minute. She was rapidly approaching a well-cooked steak in appearance. But the main reason that this was such a poor move was because Harry was even nearer than I could have ever imagined. That’s a story for the next post, though. At that time, we were blissfully unaware of what we were missing out on. 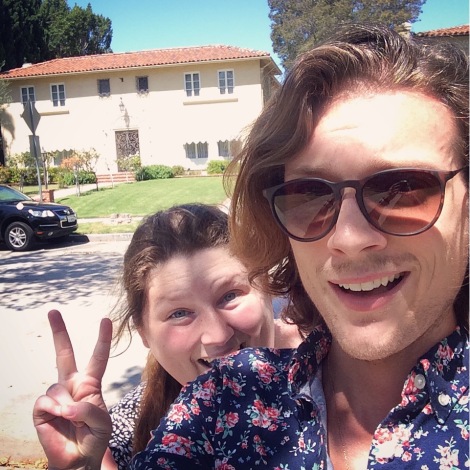 Whilst waiting for the bus to take us back, Jessica threw herself to the grass in exasperation only to hurl herself back at the concrete when she remembered that black widows could bite her at any moment. She’s a mess.

We bought far too much food at Trader Joe’s and proceeded to devour it in a matter of minutes. I had a rather good bowl or arugula pasta with a sesame seed baguette. You know how I feel about sesame seeds, right? I LIVE FOR THEM.

After dinner, we went back to the Grove to see a film. With some time to kill, we rode the trolley that passes through to the Farmers Market and Jessica for some reason took on the air of a queen lording over the peasants below her. It was a remarkable transformation.

It cost $29 to get in and get a nibble. I chortled to myself. The Blu-ray will be cheaper. But, it’s sometimes nice to enjoy a movie, and Magic Mike XXL was much more amusing than the travesty of the first. If I’m going to a movie about strippers, I want to see stripping, not an emotional expose of failed romance and drug dependance. Thankfully, the sequel was fabulously light on pathos and plot and featured comedic moments and a good deal of dancing. Joe Manganiello should probably win an Academy Award for best supporting actor based on a dance he did in a gas station. A triumph.

I could eat. So I did. One of these donuts from the Farmers Market. I AM LIVING FOR IT! 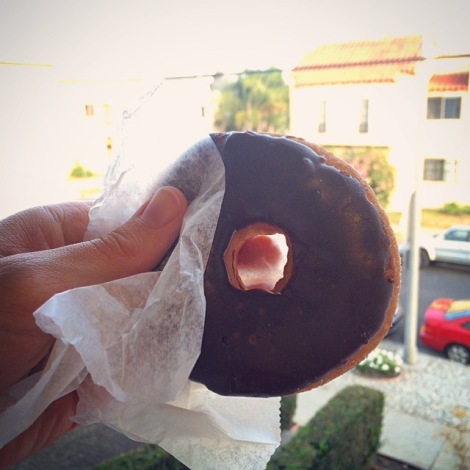