I was up a bit earlier today than the middle of the day, which was quite a change, since family was coming down from Paris to spend the day in the South of France with me.

I checked in the cupboards for bugs and was delighted to see several of their ROTTING CORPSES. I haven’t made mention of it before, but there are these tiny insects, maybe an inch long, in the apartment. I thought they were cockroaches at first, but they’re not, I’ve discovered after research. I don’t really know what they are, but they are a common part of Nice. They come in from outside, and it’s a bit hard to keep them out when there’s no other way to get fresh air. I have one window on the seventh level, so I’d die of heatstroke if I didn’t keep it open. There’s no such thing as a screened window here, so I had to find a way to DECIMATE THEIR LIVES. Baking soda was the only thing on hand that would kill them, so I sprinkled it liberally through my cupboards; it look like a cocaine addict had an accident. I was pleased that it had worked a bit.

I made my way to the train station, via the bus so that I wouldn’t be covered in sweat, and was soon in the company of Lady and Gary. Their hotel wasn’t far away, which was air conditioned with decent wifi, so we stayed there for a spell before heading out to Villefranche. The trains were ridiculously delayed. I normally don’t wait for more than ten or fifteen minutes, but today it was about forty. And it was boiling. At this point, I am accustomed to the constant presence of my overwhelming sweat output — seriously, I must have the healthiest sweat glands in France — but Lady and Gary looked rather miserable in the oppressive humidity. I joked that it wasn’t going to get any better, and it didn’t.

Finally the train arrived, and it didn’t take but ten minutes before we were in Villefranche. They should really consider building a Metro system or something that links these villages to Nice instead of relying on the train that becomes increasingly late throughout the day. 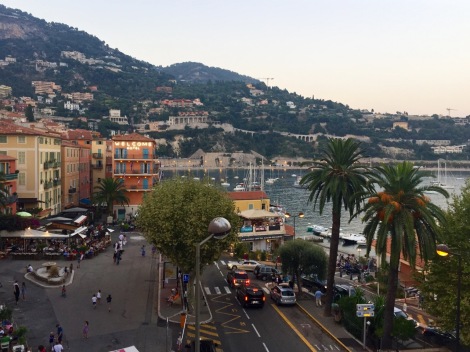 We stopped for lunch at the Trastevere, where I had eaten a few days before, and we all had a decent repast of pasta, salad, and pizza, and dessert, of course. It’s the most important part of any meal. 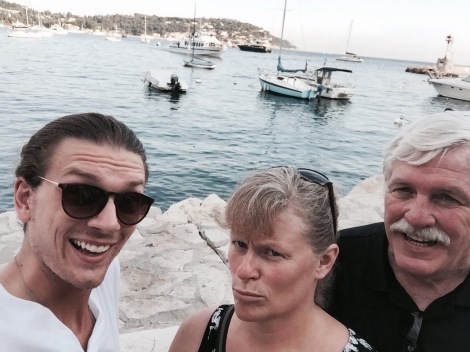 After lunch we wound our way up the stairs and paths and into Villefranche’s cemetery. This is the real reason that we had all met up. To see me, yes OF COURSE, but also to visit a particular grave. As I’ve made mention innumerable times, my grandmother lived here in Villefranche in the 1950s. Whist she was here, she had a rather remarkable life and made a number of friends, closest of which was Roger, a real estate agent who had found an apartment for her husband and her. As time went on, they began an affair, and she found love for probably the only time in her life. She claims that her husband never knew about her secret life, and that may be true, and she never made mention of this until much later in life when she started to tell me stories about her time in this magical village. I always loved hearing her talk about Roger and her apartment and the friends she had made, because it was then that she actually looked the happiest. Grandma Betty was not a pleasant woman, mind you. I won’t begin to argue in her favor because she was deeply unpalatable to most people. I liked her, but I am one of the few. But to see that transformation that took over her face at the mere mention of this little fishing village was enough to make you love her. 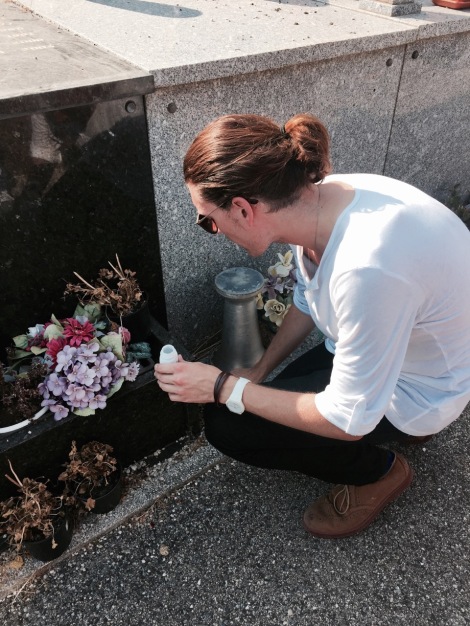 So, Lady had brought along her ashes and smuggled them through in a baby powder container, which was a clever idea. At the grave of her lover, we dug a little hole in the rocks in front of the tomb, and we interred the bits of bone and dust and covered them back up again. As we stood there looking at it, reflecting on our unique and very individual experiences with that woman, the church bells started to ring like mad. It wasn’t the top of the hour, so I’m not sure what that was about, but it was somewhat surreal and felt right to have her in a place that she truly belonged. Her grave in Iowa, in the middle of the countryside feels wrong and I rarely visit it. This one, though, bathed in sunlight and in the place she adored felt absolutely perfect. After years of being obsessed with the minutia of her life there, tracking down the most unimportant elements so that I could pull her full story together, I finally felt a sense of closure. I don’t have a bit of shame about defiling a cemetery. And this seems to be a trip dedicated to interring ashes.

We escaped the heat and popped into Chez Betty for a drink where I forced my mother to drink rosé and introduced them all to Madame Betty. 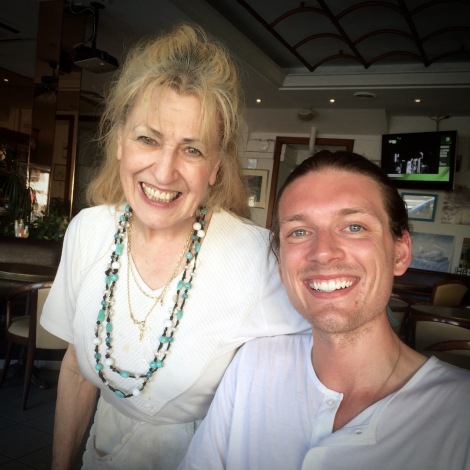 She was so pleased to see my family, and it made me love her all the more. She’s a charming woman, and I’ll miss her and her café desperately when I’m back in America…back to the everyday doldrums of work and school. Ah well, life can’t be one big vacation, even though it should.

We stopped in at a macaron shop I’d never noticed before — they really are everywhere! — and found a bunch of napping cats. This was probably the highlight of my trip so far. 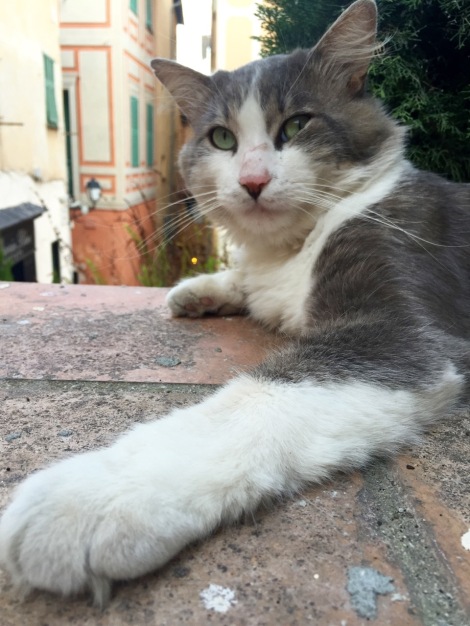 Another friend in Villefranche who refused to be photogenic. #catsoffrance #cats

I’ve been missing my Edwin and Clea so much. They’re the only things I really miss from back home, aside from my enormous bed and espresso machine. I can talk to people all I want, technology has kept us connected. But, you can’t really call a cat and hold a conversation, which is too bad. I was very happy to pet them and talk to them and photograph them and pat their heads. 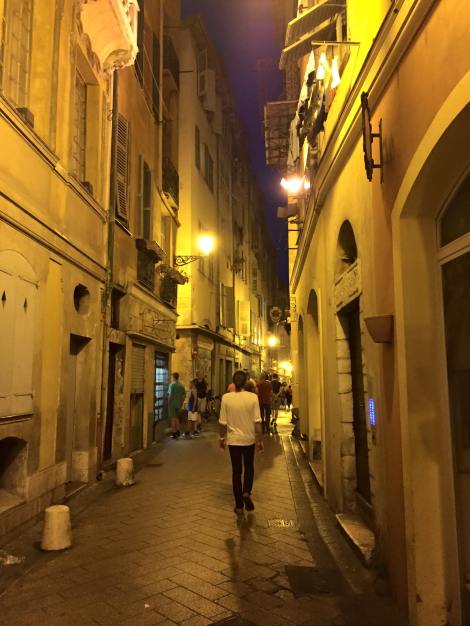 Back in Nice, we walked through the Old Town as Lady and Gary marveled at the four million restaurants that litter the streets and avenues. It is truly a ridiculous amount. And they all serve the same things: seafood or pizza. On the side streets, you’ll find some Thai or Indian food, but there isn’t a lot of variety in Nice. I’m just glad that you can find a caprese salad wherever you go.

It was an even better feeling to pop into the bakery a few blocks from my apartment that stays open late and have the baker sell me all his chocolate cakes for four euros, since they were about to close the doors. Feeling hella #blessed, I collapsed in bed and slept and slept and slept.