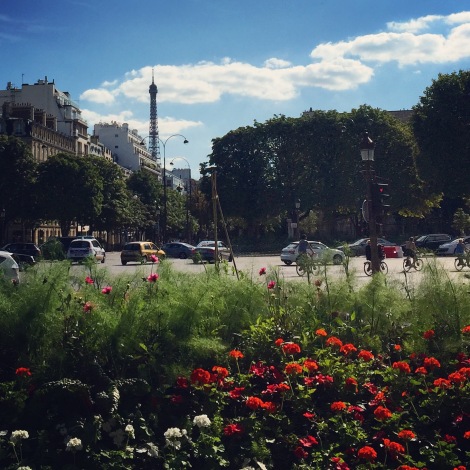 The most basic picture.

Jessica wasn’t hanging around for all the time I planned to stay away. She was just here for Paris. I am amused at the thought of her in Egypt, though. If I buy a villa there someday, maybe she’ll come, but I doubt it. The weather is going to be around 110 degrees Fahrenheit each day, and she’s already balmy in the winter. So, I don’t think she’d agree too much with that. But, still, I like to think of her in the souks, stomping through temples, whining furiously about everything as she angrily glares at hieroglyphs. No, it is for the best that I carried on alone.

So, the last day together, we did whatever she wanted to do. So, if you’ve been following this vacation for any length of time, you know that means we didn’t get going anywhere until late in the afternoon. And, you’d probably be able to guess where we went — the Louvre. We weren’t there for terribly long, enough to see a few statues and paintings before hurtling to the cinema. 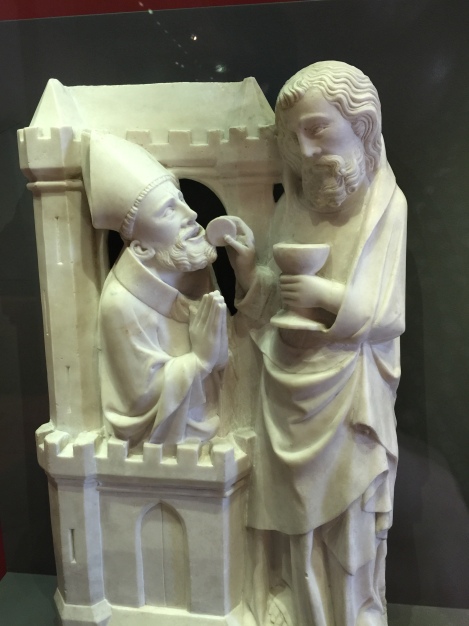 Working on that contour. 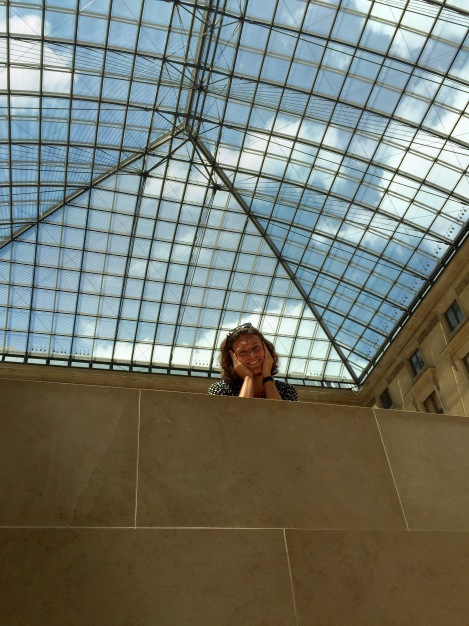 Going to the movies with Jessica is a trial for anybody, reader. She is insistent on arriving irritatingly early. At least an hour before the credits begin to roll, and then she’s still anxious. Then, she will sit there in contented solitude, sure that she has claimed the best seat in the theater. There’s rarely a crowd, and it would be just as convenient to arrive maybe five or ten minutes beforehand, but no. With Jessica, you’re there before the film is done being edited in Hollywood, and by the time the movie actually begins, your popcorn is nothing but a distant memory. Maybe someday she’ll chill, but I have grave doubts about that ever happening.

We were there to watch our one true queen, Meryl Streep, in Florence Foster Jenkins. It was a terribly sad, yet hilarious film that I fully recommend you see. I honestly don’t think I have ever related more to a character more in my life. I mean, I didn’t contract syphilis when I was eighteen…or ever…but I completely understand Florence. Perhaps the trailer will clue you in:

I do love to sing, but I’m no master of vocal music. I can carry a tune all right, I think, and I have no particular fear of belting out a song, but I know that my voice is far from flawless or inspiring. So, I get Florence. And I loved this movie. Give Meryl every award in the world. She deserves them all.

After a quite good dinner at the Café de l’Industrie, which is right below the apartment I lived in as a student, we went back to Clichy to ready her for her early departure. 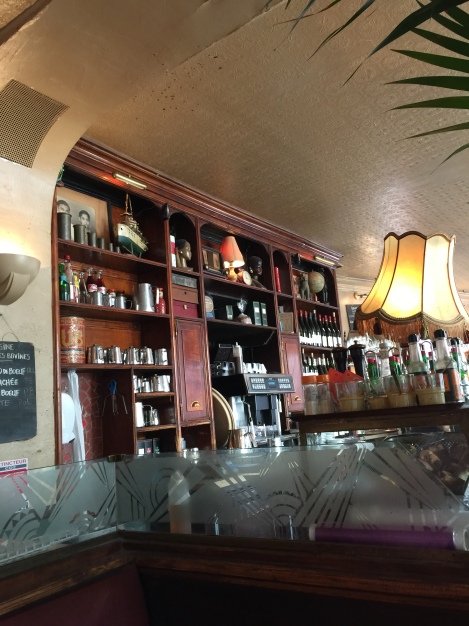 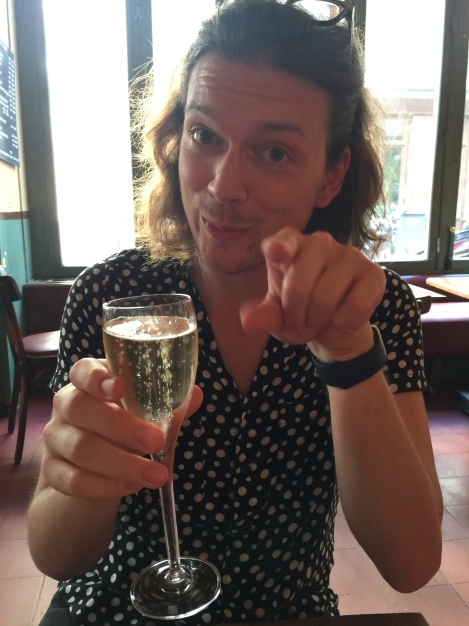 What I found in the apartment was a shock. There was a good centimeter of water on the floor in the kitchen. Frighteningly, some seal had worn through and water was flowing quite comfortably out of the pipe leading to the washer. I managed to turn this off, secure a large bowl under the leak, clean up the mess, and have the apartment owner get a plumber for the next day. I thought it had all been taken care of, but then an irritated neighbor came up, rightly irritated mind you, that there was water all over her apartment. What a horrible thing. I apologized endlessly, but I don’t think that really did any good. It’s not fun, and believe me I know, when you suffer for things that are no fault of your own. And no matter what you say or what you do, nothing can really repair the damage that has been done. I feel awful. But what could I do that I didn’t?

Quite mortified, I slept for a few hours before taking Jessica off to the airport. She had no troubles of any kind, and soon was off for Germany to take her home. It was a bit of an emotional send off, I think, since the days before had been so dark and the days ahead were unsure. But that is, I suppose, life, and everything will be as fine as it can be.

I felt a bit depressed when she had gone, which hasn’t really ever happened before. But I haven’t been properly alone for nearly a year. There’s always somebody near or needing me, especially this year, and it was strange to just focus on myself for a little while. After dealing with the plumber and eating too much pasta, I was feeling right as rain, though, and then once I discovered that the E! App works abroad, I had a marvelous marathon of Botched. If there’s one thing I love, it’s plastic surgery!

A bird that woke me from my nap.

The mercury in Paris shot up to extraordinary levels during the rest of my time in my favorite city. As you know, Paris sizzles when it’s hot. There aren’t too many trees or other green spaces to cool the city down. Of course, there are great and gorgeous parks all over the capital, but they aren’t dispersed regularly enough to really modulate the heat. So, the concrete and limestone warm up and up until the city is nothing more than a great frying pan. Air conditioning isn’t really a thing in the apartments — or public transportation — and fans are more of a novelty, so I was quite sweltering in Clichy. I love the heat, but this was almost too much, so I had to get out. I had to find a breeze.

I didn’t find it on the Métro. It was packed uncomfortably, but it got me into the city, and I was relieved by the nearly ninety degree air. It had to be ten degrees cooler on the Avenue Montaigne than in the train, and much less smelly. I have been up and down many Parisian boulevards, but I think this one has slipped me by somehow. I don’t understand why. It’s just off the Champs-Élysées, but it’s not exceptionally touristy like that famous street. Here are high-end luxury brands, the comfortably wealthy, and the American Cathedral, which was the reason I was here.

You see, reader, I have a great love for Olivia de Havilland, who is now, I believe, our only link to Hollywood’s Golden Years. She was Melanie in Gone With the Wind, of course, but I love her for her work in The Snake Pit, in The Heiress, and in my favorite film of all time, Light in the Piazza. There is nothing more marvelous than spending two hours watching that dreamy film. It’s absolute perfection, and it’s an absolute crime that nobody knows about it. I consider myself lucky and blessed to have happened upon it one late night on TCM. I have a copy of it now, and I think I’ve nearly worn it out.

Each Christmas, Olivia reads verses at the American Cathedral, and is said to worship here when she leaves her townhouse. I just wanted to see a place where she had been, so I entered the dark, refreshingly cool church, and sat for a few moments in the pews looking up at the antique flags from the fifty states of America. I burst out with a cackle to see that I had sat beneath the one from Iowa. Those nonexistent coincidences, reader, I tell you, they are getting to me. No longer dripping sweat, I studied the flags and strange embroidered cushions with Benjamin Franklin’s face on them before heading out to the Musée Marmottan to see new paintings.

It was a nice way to spend a couple hours, but the heat made it impossible to fully enjoy. There were several paintings that I adored, but no photographs were allowed — I’m so tired of that rule — so I’ll show you them from what I’ve found on the Internet.

From the museum, I tirelessly carried on to the Parc Monceu to see a folly from the olden days. Before the Internet and Disneyland and all the ways we are entertained now, the people of the past would be quite impressed and delighted by the simplest things. In the Parc des Buttes-Chaumont there is a tacky concrete waterfall that was said to send the Parisians of its day into rapture. Here in the Parc Monceu are little recreations of Grecian temples and a tiny disproportionate pyramid. That was the entire reason I went to the park, and now I can cross off yet another bit of Egyptomania off of my endless list.

The day was running long, but I still needed to get bread, so I did something I haven’t done on this entire trip, and made a special trip just for it. I’m not ashamed either. I don’t much care for Montmartre, but Pacifica bakery was well worth the jaunt. The breads are all very well-done, and by well-done, I mean they are nearly burned. Just how I like them. The staff is marvelous, and I even saw the owner, who is famous to me since he was featured on David Lebovitz’s website.

I couldn’t come all this way without climbing the stairs of Sacré-Coeur, which I don’t regret, but I made a complete fool of myself. I just think I slipped, I refuse to believe it had anything to do with multiple sclerosis, but slipped I did. I fell and I fell, but I never really fell…you know what I mean? I did that off balance dance for a good ten feet, got a minor scratch on my phone, saved my lemon tart, and finally got to my feet. It was, I dare say, impressive, and the tourists on the steps gave me a rousing cheer. It was too kind…and also somewhat mortifying. But, I’m a ho for attention, so I enjoyed that. I don’t recommend falling for applause, though. After going through the church, which I’m not at all fond of, I went back to Clichy, exhausted and satisfied.

Chapels under the church. Never knew they existed.

The streets of Montmartre.