There is nothing about me that is a morning person. I think it’s monstrous to see the world before nine o’clock. Inexplicably, I have a job where I have to be up well before the sun 180 days of the year. It’s madness, I tell you. Sure, it’s nice when you get up, feel refreshed, sip tea in the solace of the dark…but then lunchtime hits and you’d rather be in a coffin. No, give me the nightlife. So, it was horrible, unspeakably nightmarish to wake up at five o’clock to get myself somewhat lively and head out to the airport.

With a sigh that was equally full of grief and joy, I closed the door to the Clichy apartment for the last time of this trip. If I have my way about it, this will be a spot I come to again and again and again. It’s flawless. It’s Paris elegance at half the price. I mean, to be honest, I probably could have found a room in the middle of the Marais for the price I paid, but I would not have enjoyed it. I would have had just that…a room. In Clichy I had a full kitchen, a bedroom, a sitting room, and all the comforts I could dream of. It was flawless and totally worth the little extra time it took to get into town.

Getting to the airport was uneventful. I marveled for one last time that my Navigo pass allowed me to go all the way out there for a pittance, and then before I knew it, I was whisked through security and waiting to board. Nibbling a stale croissant from one of those horrible airport restaurants, I stared out into the hazy morning. Airports are hideous. Before much longer, I was in the air, leaving my beloved France and heading off to someplace utterly new: Berlin.

I want to see the world, and there is literally nowhere I won’t go to say I’ve seen it, but to be completely honest with you, Germany has never had much of a draw for me. I’ve tried learning the language more times than I could possibly count, and all I’ve ever mastered is how to book a room, how to order white wine, and how to count to twelve. I mean, that would probably get me somewhere, but it wasn’t enough to have any kind of conversation! Still, Berlin has long been on my mind because the city houses one of Europe’s best Egyptological museums. Since it is my life mission to see all of these, that’s why I was on the plane.

It felt as if the flight was over before it began, and in what felt like an instant, I was on a bus and then on a train, and then on the street where my hotel was.

I have no memory of booking the hotel, so I have no clue what drew me to this one in particular. I must have been tipsy or tired when I made my reservation, because it’s nothing like the normal places I stay, but I still did a damn good job. I tend to stay at historic hotels in historic parts of town so that I can get a better grasp of the culture and old-world opulence. The Adina hotel is a four-star chain hotel of apartment rooms. This one was located near Checkpoint Charlie — which everybody but me has apparently heard of — and a decent walk from Museum Island, exactly what it sounds like, a museum covered in islands. I was insane about the idea.

I was charmed the second I walked through the entrance. The staff went out of their way with my abysmal German before we gave up all pretences and spoke in English. I must have been charming or something because my room was upgraded to a one-bedroom suite instead of a studio. What a kindly gesture, and I fell immediately in love with Germany.

The room overlooked the courtyard and had a dishwasher inside a compact, but fully furnished kitchen. And there was a washing machine in the room, cleverly hidden in a closet. I was over the moon. It was comfortable, modern, and just damn nice. I almost didn’t want to leave the room and just sit there, enjoying myself, watching the BBC. But, I hadn’t come all this way to sit on my ass, so I freshened up and hit the town. 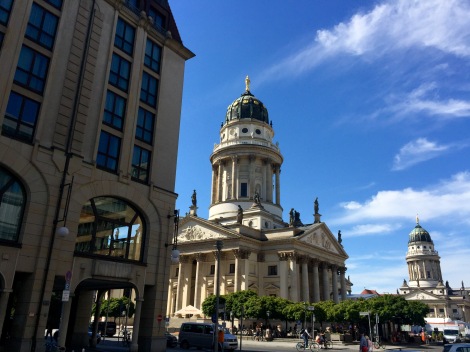 I had nowhere in particular to go, so I just sauntered through Berlin, following every whim and each fancy until I found myself somewhere apparently worth seeing. I was stunned by underground malls that were built of marble.

Then another huge mall that spawned city blocks and many levels — Germans must love malls, there was an unusually large number of them.

I was intrigued at the architectural differences from one building to the next. More than a lot of places, Berlin changed a lot after the end of World War II, for the obvious reasons. So, there are gorgeous historic buildings, recreations, modern constructions, and then other hideous “modern” buildings. There’s a world of difference in modern, you know?

I found myself close to the site of Hitler’s bunker, so I thought I should go see that out of grim curiosity. I was pleased to see that it was nothing more than an overgrown parking lot. There’s a small, cheaply made sign detailing what was once here, but aside from that, there is no memory of the awful man. Seemed appropriate in every fashion.

Not five minutes away was the memorial for the murdered Jews of Europe. It’s an endless procession of monolithic rectangles of stone that goes on as far as the eye can see. You wander and you wander, deeper into the labyrinth, and it’s sad and it’s oppressive, and that’s clearly the point.

The other tourists must not have felt so profoundly, though, as they were taking cheerful selfies and leaping from one stone to the next. I found this utterly distasteful, so I carried on. 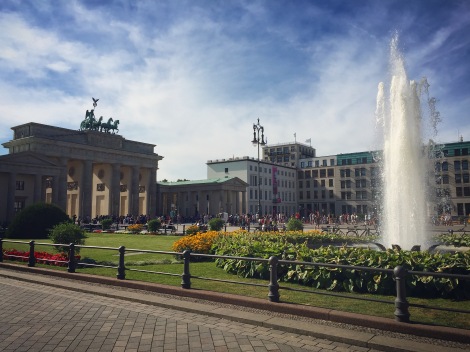 Before me was the Brandenburg Gate, which is probably the most emblematic site in all of Berlin. I knew that President Kennedy had called himself a jelly donut here one time (not really) and that Napoleon triumphantly marched beneath it, but other than that, I knew nothing about its significance. Can’t say I do yet.

In need of cash, I went out in search of an ATM. I discovered that Germans don’t really use cards. Everything is cash only. That’s fine, but there is a startling lack of ATM machines. They aren’t on every street corner like they are in Paris or London or even in Luxor. You have to go physically inside of a bank. And for a nation so dependent on cash, you’d think it’d be easier to get your money. This proved to be a journey for me. Every ATM on my map didn’t exist. One building claimed to be a bank, but was really a government office. The security guards gave me strange looks there. Finally, I found this unsettling, abandoned room on a lonely street filled with cash machines. I was sure I was going to be jacked for my bling there, but nothing awful happened and I soon had money in hand. 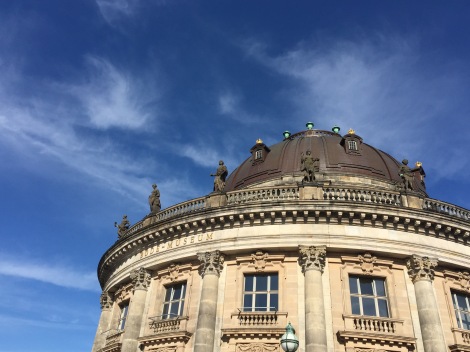 Thoroughly worn out from stomping all over Berlin, I made my way back to the hotel and had a fabulous dinner of risotto. And a martini. Always a martini. Gin. Dry. Twist. Yasssssss.