This morning, after I finally woke up, we decided to go to the Monoprix to buy all the things that I need to live here. Along the way, there were the usual hobos that frequent this road. Today’s hobo was a woman that I hadn’t yet seen. She only wanted “deux centimes” unlike the others who ask for whole Euros. I still didn’t give anything to her, but I felt that she was a little bit more reasonable as compared to the others.

On the road that leads to the Monoprix there are quite a few shoe shops with the same exact kind of shoes in each window. Even so, there is always a small crowd of people gathered around the window, talking about the make and model of the shoe. Down the road further still is a very old…something. I don’t know what it is. It looks like a part of a church, yet part of a fountain, yet part of something that I don’t know what it is.

Even further down, I noticed the Picard store. This is a store I had heard about when listening to David Sedaris speak about his life in Paris. The Picard store is a shop where everything is frozen–but good. Back home, I can’t stand frozen food because it just tastes like preservatives and cancer. But here, it actually tastes like food, which seems to be a trend. The best frozen food I have ever had came from Italy, so, maybe the Europeans are onto something with their frozen food departments.

Mother walked into a “Dollar Store” type place, which was actually quite expensive. They had everything there from extension cords to candles, from frames to ceramic frogs, and everything in between. All of the merchandise was thrown out into the aisles and cascading off of the shelves–which made navigation a breeze–not. It was impossible to move anywhere with any relative sensation of safety and I was very uncomfortable there. I don’t know why.

We finally made it to the Monoprix, but not before we ran into the same beggar woman still asking for “deux centimes.” In the Monoprix I found a variety of decent clothing and books, of the books, I purchased two. The first was a biography of Paris Hilton called “The Other Face of Paris Hilton” but in French, and the second was a children’s series entitled the Magic Kittens. I could never pass either of those things up. I also bought a pencil that I think was designed to teach children how to write–but I don’t care. The thing is amazing! The lead is the size of the lead in a real pencil, and it comes with a lead sharpener. It is just great and I love it. 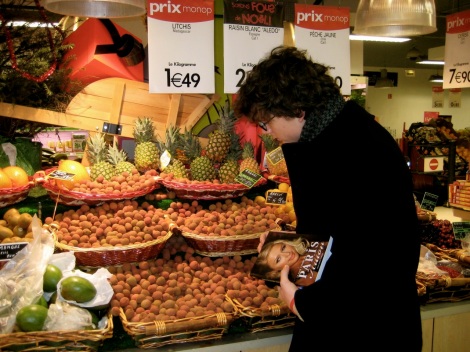 We went upstairs so that we could purchase a whole bunch of food. We were immediately alarmed with the price of beef. It was like, twenty euros per pound, mother said this was expensive. I have never purchased meat in my life, so I didn’t think the price was too outrageous. One thing that I did notice the price for was candles. The ninety seven cent Glade candles you can get at home, they are six euros!

I was delighted that Monoprix seems to have some kind of green ordinance. All of their household goods had green options from laundry soap to paper towels to printer paper. I love green things and recycling, so this was great.

We then went to the cheese aisle which is massive and difficult to understand. For their selection of mozzarella, they only had those nasty balls which I hate because they have no flavor. They just taste like water with a texture. We got some shredded cheeses, string cheese, cottage cheese (which I just remembered we bought), and some cubes of Parmigiano-Reggiano, this particularly delighted me because that is my favorite cheese on the face of the planet.

We also bought a drying rack, but upon returning home, we had to return it because it was broken. I sent mom off with a piece of paper, written in French, explaining the problem. She looked hilarious walking down the street, awkwardly carrying the wings of flapping metal–still brings a tear to my eye.

While mother was gone, I discovered that I love the music of Eartha Kitt. Every song seems to contain the phrase, “I want a millionaire” and that basically sums up my life.

We decided to go out because I wanted to take a picture of Notre Dame. I was annoyed when we got there because none of my photos were turning out clear, except for one. Oh well. We next went to the Champs-Elysées so that I could go back to the Virgin Megastore. 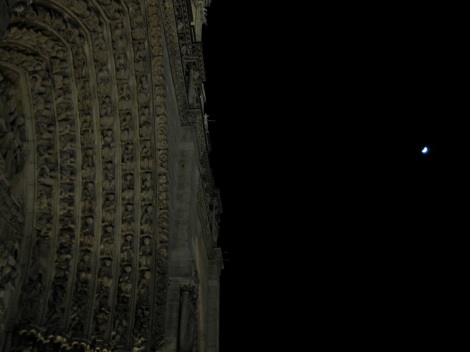 On the train there was this guy in a posse that looked exactly like Ms. J on America’s Next Top Model. Once he got closer, it was evident that he was not the fierce diva coach extraordinaire that we all know and love. I am still a little disappointed.

At the Virgin Megastore I purchased a show called Le Coeur A Ses Raisons which is a Canadian comedy in French. I haven’t watched it yet, but I have seen previews and it looks rather delightful. Then, down in the bookstore area, I showed mom all the delightful and exciting book covers that the French use. I was using sarcasm of course as the French use probably the dullest book covers on the face of the planet. Each cover is a single color in a basic font, with maybe, and only sometimes, a portrait of the author–and that is sometimes too exciting. 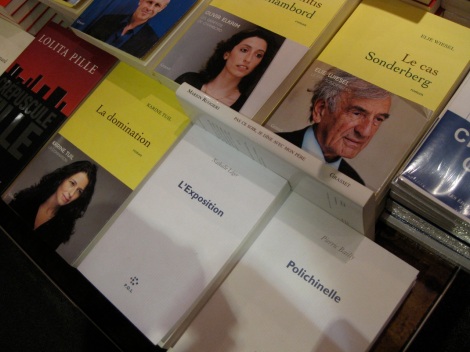 We went to a little mall next where I wanted to buy things from Armani and D&G and a myriad of other places. Mother seemed to have a problem with a 200 Euro T-shirt. I didn’t understand…

We boarded the train for home only to ride one stop and then be forcibly evacuated from the train area. All of the passengers were in a huff when a message came over the loudspeaker saying that there was a suspicious bag on car 3. I had listened to Syliva Browne’s (unarguably America’s greatest psychic) predictions about 2009. She had said that there will be minor terrorist attacks on Paris in January, so I didn’t take any chances. We took a different train, and several minutes behind schedule, we arrived back home.