I am developing a very bad habit with the snooze button on my alarms. I keep hitting them, reassuring myself in my head that yes, I can get ready to go in less than five minutes without a problem. Of course, nobody can get ready to leave in five minutes, so I woke myself up fifteen minutes before I had to leave. I really shouldn’t do that, but I can’t help it, I don’t like waking up.

I have recently started to bring my book with me on the subway because I’m no longer reading a massive hardback. Taking along a little paperback is a surprisingly nice way to pass the time, even nicer than a round of solitaire on my iPod Touch. I enjoy having a light book so much that I am now going to get myself an Amazon Kindle when I get back home. I’ve never seen one in the wild, but I think that they are interesting–especially since they are supposed to reveal a new one tomorrow afternoon. If you don’t know what a Kindle is, it is a device that is a little bit larger than a paperback. You download books onto it and read. The screen uses something called e-ink technology which makes it look as if you are actually looking at a printed book. And, the prices for books are wildly cheaper. It isn’t uncommon for me to spend $20-$25 per book at Barnes & Noble, but with the Kindle, prices rarely exceed $9.99 for a new release. It kind of pays for itself, I guess. So, yeah. I want that. Here is a picture of what the new one is supposed to look like, for those who are interested. 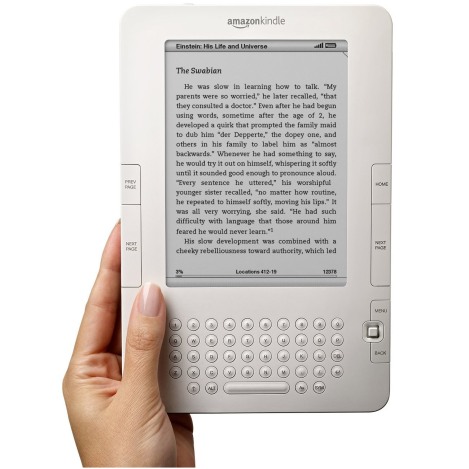 Anyway, anyway, anyway, I got to school in shockingly good time. Nobody rides the trains on the weekends and even though they run at the exact same times and speeds, with fewer people, we get places sooner. It makes no sense to me.

Today’s class wasn’t a part of my actual schedule, it was a bonus class that we had to pay for, so I was going to be with a bunch of different people, the majority of whom would most likely be tourists. I was excited to go to something where I wasn’t going to be graded or be in charge of anything!

So, I got changed into my uniform and was led up to the Showroom. I’d never been there before, it’s kind of like a dining room. It has a massive glass roof, which is very pretty. Breakfast was various juices, coffees, teas, and croissants. I never thought that I would be, but I am so painfully tired of croissants that taking a bite of one kind of makes me nauseous. For as much as I loved them, I’m now sickened by their semi-sweet flavor.

At 9:00, we were led up to the classroom by Deborah, our translator. She is one of the three translators we have on a regular basis. She is from America, but speaks unintentionally with several accents, at times Australian, British, American, and French. It’s very interesting to listen to. Our chef for the day was Jean-Jacques, who I have had for a few of my Demonstration lessons. I like him, he’s very quiet and friendly, so I was happy to have him.

The first thing we made were baguettes. I couldn’t help but excel at this, having made them hundreds of times before at home. When I say hundreds of times, I’m not exaggerating, if anything, I’m being modest. It does make a lot of sense to weight out ingredients though, unlike at home where we use cups and such, because you get the same result every time. I know that when I make bread at home using cups, it is sometimes very dry and sometimes very wet. Using a scale, you know exactly what you are going to get every single time. We were taught how to knead our bread in a very different way than I do at home. You form it into a ball, lift it above your head, and smack it back down onto the counter. It’s very loud and very fun.

I also learned to add the salt after kneading it, if you add it with the rest of the dry ingredients it will react with the yeast and the bread won’t rise as nicely. And, salt is only added to make a nice color, not for flavor. Oh, properly cooked bread doesn’t make you fat, improperly cooked bread does. A good bread is put in the oven at a high temperature until it begins to color, then the temperature is lowered to actually bake the carbohydrates and such inside the bread. Bad breads are cooked at the high temperature quickly, and it isn’t really finished cooking, so you’re eating raw materials, and those aren’t good for you.

We went on to form a ton of breads. All of the dough was made in a machine, like in a modern bakery, but we still took the dough and shaped it into their molds or whatever. There were little dinner breads, country loaves, fruitcake bread things, brioches, savory breads with garlic, scallions, and tomatoes in the middle, then the baguettes, and later croissants. I began to fear how I was going to get it all home, and my fears were very accurate later on.

This Practical was much nicer than any Practical we had in an actual class. There were assistants who put our names on things, they would prepare our molds and baking sheets, sometimes they even carried them to the oven for us. It was ridiculously luxurious. And we had a translator in the room which helped so much. An in-room translator should really be a standard feature at Le Cordon Bleu, I will never understand why it isn’t.

Around ten thirty, we all began to notice little flakes of snow falling from the sky, I was mortified, everybody else seemed to be thrilled. The girl I stood next to (who is even lazier than me…I know!) was excited because she hadn’t seen any snow for Christmas or since, even though she claims she has been in Paris since Christmas. I’ve seen plenty of snow, myself, since I’ve been here. She had the most grating voice, but I was in the situation of, “Great, you don’t annoy me enough to not talk to you, but now I’m stuck here because we are standing next to each other and I cracked a joke, even though I’d rather talk to the old lady two people down, oh, please, shut up once in a while, you.” I’m sure you’ve all been in situations that were similar to this. Anyway, I talked to her for a while, she had been in Basic and then taken a three month break. On her class trip to a bakery, she had seen Karl Lagerfeld eating a macaron! I would have died. We are going to the same bakery in a week and a half for our “field trip”, and I know the chances of him being there are slim to none, but, still, I would just die.

Chef then thought he was giving us a pleasant surprise when he said we would be making croissants. My new “friend” and I moaned in unison, “No!” We already had enough bread for a month and no way to feasibly take it all home, plus, as I said, I am so tired of croissants. It was good practice though, we have to make them in a week or two at school.

Now it was time for lunch. IT WAS SCARY BAD! There were things that looked like loaves of bread, except, they were pureed salmon and beef. I was so sickened by it all. Then there was cheese, which was good, bread, which was alright, meat, which was very chewy, wine, which was nice, and cherry tomatoes, oh, and shrimp cocktails which smelled rancid. I always try to eat new things, but this spread just looked so unpleasant that I couldn’t manage to be my usual daring self.

Deborah came in to join us for a glass of wine and told us that she was having a dinner party that night at her home in Versailles. She was worried, though, that she would have to cancel because they already had five inches of snow there! The roads were shut down and she was going to have to take the train home, I felt bad, but worse for myself, when I remembered that I had to go outside in the storm of the century. I went to the window upstairs, and was surprised by how much snow there actually was. It was, truly, a Parisian blizzard. Nothing was sticking, thank God, this city is much too hot for that, it was just making very deep puddles.

Now, we had to roll out the croissants. I was glad to learn this skill because my rolling skills leave much to be desired on the croissants that I make at home.

The breads were all baking, filling the kitchen with the tasty aroma of yeast as the snow came tumbling down from the heavens. It looked like a scene out of a Christmas movie, aside from the fact that it was February. As each of our breads were pulled out of the oven, our piles became more and more massive. More bread than we would probably ever eat in the rest of our lives.

When everything was done, it was time for our graduation ceremony. I got my certificate saying that I had graduated from the school of “pain.” (Pain is French for bread.)

We were given a massive quantity of plastic sacks and went about filling them to the brim with various pastries and breads. It was a bit insane. On the train back home, the sack with baguettes began to rip, so that was an interesting trip to the apartment trying to cradle five baguettes as the four other plastic sacks slowly cut off my circulation.

I finished up my chicken alfredo and fell asleep watching Crag Ferguson. My couch is way too comfortable for my own good.