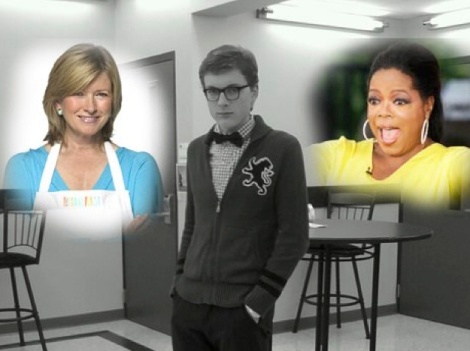 Well, here it is, the blog post you have waited and waited and waited for with bated breath. I have never really understood that phrase, nor have I ever taken the time to look it up, so that does not really help. If you happen to know the etymology or whatever fancy word you use for the origin of phrases, please do let me know via the comments at the end of this post. I meant to get this finished last year (only three days ago, stop judging me!) but I was far too busy wrapping presents, going on treadmill jogs, and watching Miranda (a new favorite thing for 2011, but we are starting to get ahead of ourselves!)

I hope that you have enjoyed reading about the products, concepts, and whatnot I have written about and are intrigued enough to try some of them out. There were hundreds of other things that I could have included, but these were my favorites…well, on with the blog, shall we?

I cannot remember what prompted me to first buy a big of these delicious nibbles, but from the very first bag, I have not been able to stop my addiction to them. Brown rice is one of my favorite foods, and to have them in a salty chip form is heavenly. The taste is delicious and simple and, I think, inoffensive to picky eaters. I wouldn’t recommend the other varieties, though, as they have an off-taste to them that you get in chips that have flavors. (Though chicken-flavored chips in Paris are simply divine. Now that I am a vegetarian, I pray that I will still be able to eat them as they are ridiculously scrumptious.) Now, get off your bottom and try some of these out!

I adore old Hollywood and intend to one day take the city over with my clever writing, unique ideas, handsome face, and all-around charm. If I could have dinner with anybody dead, it would be Joan Crawford. (Julia Child, Rue McClanahan, Roger Bernasconi, and Madame de Staël would also be at my table.) Thinking of the things I would chat to Joan about fill me with a glee that is unreasonable. I’d talk about the studio system, her films, her shoulder pads, her beauty regime, her homes, Pepsi Cola, her bitch daughter, and so many other things that will never come to pass. Moguls is, without a doubt, the very best documentary that was on the television this year. It describes in vivid and entertaining detail just how Hollywood came to be and who the people were in it. I think you can buy this on DVD now, as it aired in November. Watch it, and you will not regret.

I bought these on a whim one day while I roamed the aisles of Walmart for a little over five hours, exploring every department and almost every row of merchandise. I thought they would be fun, but little did I know they would become so necessary to me. Inside the box there is a thin, long strip of wax paper with little spots of sticky, gel-like glue, the kind that attaches credit cards to the innumerable advertisements that we all get, and the spots are fantastic. They stick paper to paper with no mess and very quickly. I can’t really find the words to sing their praises, but they are wonderful and definitely a good thing.

I did a really great job of reading classic books this year because of this wonderful website. Not many people want to sit down and read Anna Karenina or the unabridged version of The Count of Monte Cristo because the books are imposing and seemingly dull, but when little snippets arrive in your email inbox everyday, you can’t help but read them and find out that these great works of literature are great works of literature for a reason. I can’t begin to recall how many books I’ve read this year because of DailyLit, but I couldn’t be happier. I’ve read many of the works of Oscar Wilde and Agatha Christie and so much more. Currently, I’m reading: 1632, The Ballad of Reading Gaol, The Mysterious Affair At Styles, Anna Karenina, Great Expectations, Les Miserables, The Count of Monte Cristo, Pierre et Jean, and The Koran. I couldn’t be happier, nor feel more cultured! Do check out this website, as it is truly one of the best things I have ever found on the Internet. 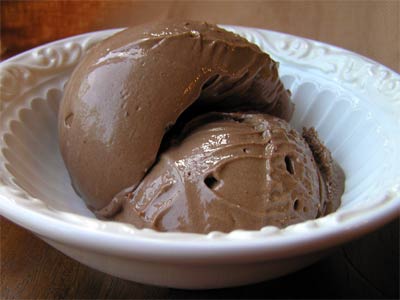 $ of ingredients | From my kitchen!

This recipe was developed using Metric, so go out and get a kitchen scale and thermometer that both function in Metric to make this decadent treat — and teach yourself Metric, too, so that you can be like the rest of the world!

In a large saucepan, bring cream, milk, and 100 grams of the sugar to a simmer. Add cocoa powder and chopped chocolate to saucepan and allow to melt completely. Meanwhile, in a stand mixer, whip the egg yolks with the remaining 50 grams of sugar until pale, yellow, and increased in volume. On low speed, slowly pour the chocolate into the eggs to temper. Scrape mixture back into saucepan and whisk until custard reaches 80 degrees Celsius. Strain into a large bowl. Allow to cool to room temperature, then mix in vanilla, espresso, and salt. Cover directly with plastic wrap and chill overnight. Process in ice cream maker according to manufacturer’s instructions. Enjoy. (Makes approximately one liter or one quart.)

Gone With the Wind by Margaret Mitchell

$15 or $0 on the Australian Project Gutenberg | http://gutenberg.net.au/

Gone With the Wind is one of those books I was always intimidated to read for some reason. I couldn’t imagine how a story about the Civil War could be entertaining, bloody rather. But, after saying “Fiddle-dee-diddle-dee-diddle-dee-dee” a million times in the style of French & Saunders, I decided to read it. I fell in love with this book the first paragraph, and after the first chapter, I knew that it was my new favorite book, pushing The Historian to second place (which I found long before this silly vampire craze started, mind you). The book is an entire world with so many plots that I cannot begin tell you about, just know that it is marvelous, and while terribly racist at times, it is still amazing. You feel like you are there on the fields of Tara ripping the cotton from the red earth, and as if you’re in love with Ashley Wilkes, and that you rise victorious through the ashes like a phoenix with Scarlett. It’s too much. This quote from the book, is basically a spot on description of myself, “His hands were not made for work or his body for anything but broadcloth and fine linen. God intended him to sit in a great house, talking with pleasant people, playing the piano and writing things which sounded beautiful and made no sense whatsoever.” And, “I must be ze King of ze Pies. Eet ees my destiny! Lak Napoleon, I follow my star.” Go and buy it, put it on your Kindle or whatever you’ve got, check it out from your library and read it. Gone With the Wind, is so completely the great American novel.

$0, or whatever your cable bill is | BBC America

I’m a total Francophile, but I think that if I were ever to settle down in a foreign country, it would be England. Probably on one of those lovely beaches in Cornwall where palm trees inexplicably grow. I love everything about the United Kingdom, the thought of royalty fills me with glee, having all the BBC channels on my television makes me want to wet myself, I’m enamored of going on relaxing weekend trips to lazy villages, I want to explore London more (I’ve barely scratched the surface), but above all, I adore the so-called “dry” British sense of humor. I don’t fully accept this generalization as I’ve heard many a fart joke from British comedians, but I won’t deny that I adore them. From my beloved Jennifer Saunders and Dawn French to Eddie Izzard and Craig Ferguson and Catherine Tate and Johanna Lumley, Shappi Khorsandi, and Graham Norton. I love them all! The Graham Norton Show is my favorite chat show on British television. This is another one of those things that I can’t begin to describe. It is uproariously hilarious, terribly inappropriate, charming, and totally irreverent. Every weekend, a group of completely unrelated celebrities gather on Graham’s couch to chat about nonsense and it is always wonderful. This Saturday, Dawn French and Cher are going to be on together and you know where I’ll be at 9!

I am crazy about interior decorating and anything and everything that is related to it, so this website has become a kind of obsession for me. Builders, interior decorators, and everyday people upload pictures of things they’ve made and then you can look at them for inspiration and collect your favorite images in your own Idea Book that you can use to inspire your own projects. Above is my idea of a dream bathroom, it is gorgeous! You have to go create your own account and start collecting images, it is addicting.

There have been rumblings of a tablet computer from Apple for years, decades probably, and I had never had any interest in it at all. What was the point of a tablet? Then, this magical device appeared and I suddenly understood just what the point was — there is no point, you tailor the device to fit your needs. Everybody’s iPad is used for different reasons, I’m getting ahead of myself though. When the iPad was released, I was floored by the beauty of it and the thousands of things that I could imagine doing with it. I went to the Apple Store, pushed some hooligans out of the way, and looked at it. It is a miraculous thing. I touched it and was delighted. I looked at the pictures and found one of a macaron. This was a sign that this machine would soon be mine. So I bought the most expensive one possible and haven’t regretted half a cent of the purchase price, nor will I ever. I cannot imagine going a day without my iPad, it has become my constant companion. Since we will all use the iPad differently, I can’t sell it to you the way I sold it to myself, but I will list the apps that I love: iBooks (beautiful for reading), Pages (I’ve written hundreds of pages with this word processor), Good Reader (organizes all of my PDFs), SketchBook Pro (for high-quality drawing), Ultralingua Dictionary (for French and Spanish), Kindle, Kiosque Relay (for my French magazines. I can read Public in America! Cheaply! It’s too much!) and then, of course, the Martha apps: Martha Stewart Living and Martha Stewart Makes Cookies. They are both beautiful, one the future of print media and the other the future of cookbooks. People who hate the iPad or talk down about the iPad, have simply never used one. Go out and buy one now and you will never regret it.

I hope that you have enjoyed this last installment!