Last year, I decided to go on a bicycle ride. There was nothing unusual about this, but it was a long ass bicycle ride. 50 miles on the new High Trestle Trail, a gorgeous trail that I am very lucky to live very near to. It goes from Woodward to Ankeny. So, I went there and back again. It was a stupid idea. I didn’t walk the next day. Make your own joke.

So, this year, my brother wanted to go and I warned him, but he was persistent, he even bought his own bicycle, so I gave in and at 9:30 last weekend we arrived at the Woodward trailhead. For some strange reason, I was actually excited. I must have forgotten the agony of last year’s excursion. It was a gorgeous day. All the leaves were blazing with color, there was a gentle breeze, it was warm, I dressed adorably (My muse that day was Zayn Malik in the new One Direction video. Don’t judge me.), and I was excited to burn calories. I saw this the other day:

and it totally applied to me, so I looked forward to shedding a few pounds of fat over my shy abdominal muscles. Didn’t quite work out that way, but whatevs, I still bicycled 50 miles.

I was very smart and took along my sister’s bicycle that my father bought at a garage sale. I think the bike might have a magical spell on it. You hardly do any work and yet you fly–it’s marvelous. Within ten minutes, Jose was whining. He had reason, his tire was going flat, but I still amused myself laughing at him. It wasn’t long until we made it to the bridge, the namesake of the trail and truly a spectacular sight.

Soon we were in Madrid and Jose filled his flat tire up. For being as mechanical and athletic as he claims to be, he didn’t know how to fill a tire and he was already out of breath. I was more than deeply amused.

Off we went and he could finally keep up, we were flying through woods and fields and it was all quite easy, really. I knew that the pain would come eventually, but I was just happy it wasn’t happening, yet. Soon we were in Ankeny and realized just how pained we were. My ass has never hurt so much in my life, nor have other more gentlemanly regions. Bicycle seats are not designed intelligently. But still, I was in better shape than Jose, so I was happy.

We collapsed in a park for some time before finding the courage to get back on the bicycles. When we did, that was not a happy moment. Sweet Jesus.

It was horrible going back. After a few miles, I fell into a mechanical rhythm and didn’t think much about the pain anymore. The magical bicycle was a blessing, if I hadn’t used it, I don’t think I would have been so happy. My hips were aching like a mofo at this point and Jose was probably a half mile behind.

When we were halfway home, we decided to take a break at a sports bar along the way. There seems to be a lot of places to stop. I’m not exactly sure why you’d want to have a cocktail, though, before biking. Seems like a recipe for death. I didn’t have my ID with me, so I didn’t partake. I just had appetizers. The fried foods obliterated all my hard work, but I was hungry. 13 more miles to go. 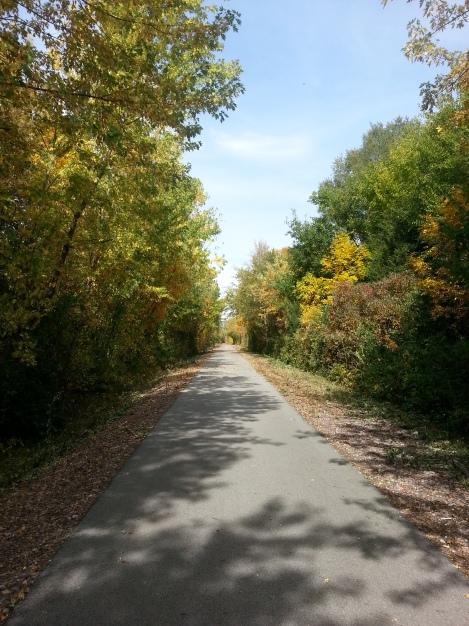 It really was a gorgeous day, but I wasn’t focused on nature, more on the pain.

Finally we made it across the bridge, and it really was stunning.

Only a few miles more and we were back in Woodward. That sucked, in a good way. I did much better than last year. I suppose this will be a torturous thing I’ll put myself through every year just to make sure I’m not obese.

Then, I went home and I ate…everything.