Today, I was determined to finally go to the beach (beach, let’s go get away (I said that about a thousand times.)). And I did, but it was a hell of a struggle! I just loathe the busses with a burning passion. I hate them so much. The thought of being on one fills me with total rage. So, I was out of my mind with agony when I had to take not one, but two!

Of course I sit down in front of the perverted lunatic. This wouldn’t happen to ugly people. He kept touching my neck, which was gross because he probably had crabs all over him. Then he kept talking to everybody. I say “talk” in the most vague sense because they were just the ravings of a lunatic. I don’t think any of it was in any language. Just the language of crazy people. Don’t we have facilities for these people? Asylums weren’t great, but at least they had a home. I’m not trying to be insensitive to their plight, but do we really need them on the bus? You think I’m being cruel, but wait for it. HE WASN’T WEARING ANY PANTS. He was naked. On a public bus. I don’t even know how this works.

So, I sat in disgust until we went past my stop. I don’t understand how these things work. But, I have nothing but the warmest regards for the kindly folks who drive the busses. They’ve all been kind and professional and more than patient. I would have lost my shit driving filthy hobos around all day in Los Angeles traffic. I would have driven right off the road that runs along the Pacific and drowned myself. I couldn’t deal with it. I hope they’re well paid. Especially the sassy one with the Karl Lagerfeld gloves. Loved her.

I sat and I sat and I sat there on that stupid corner waiting for the bus to come and take me to the beach. I couldn’t deal with it. I was losing my mind! In Paris, you have to transfer trains all the time, up to three times in some cases, but there’s always a train within a few minutes, NOT FORTY-FIVE MINUTES! I don’t know how people live here without a car. It’s beyond ridiculous.

It finally showed up and we began a LONG journey out to Santa Monica. Traffic was bad, but there weren’t any bums on this bus, so I felt a bit better. It also seemed fairly clean. It was an exhausting drive and I gleefully threw myself outside at the first glimpse of the ocean. I need to be around big bodies of water for my sanity. It’s been way too long since the last time. 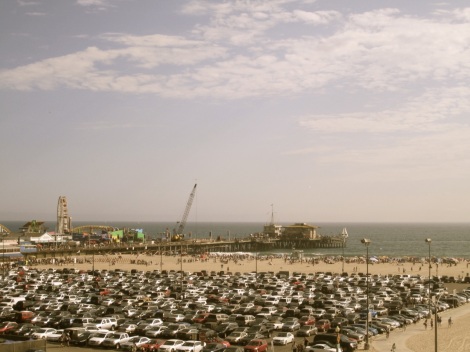 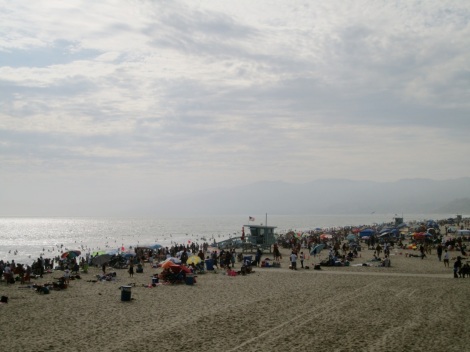 I got off the pier and walked up and down the beach for awhile. So many peasants. It was really quite chilly and the water itself was freezing. Gulf stream and all, I know. I hate the gulf stream. It means that people in cold places get palm trees. I don’t get palm tress in the middle of Iowa even though half the year it’s like a thousand degrees. Stupid winter. But, this climate change has been making things crazy and I think I’m going to have palm trees before too long. I’m not joking, either. There’s a guy in Des Moines who has a couple that he overwinters. I’m absolutely obsessed. I have this plan to build a cottage in the woods that my family owns and I want there to be like six palm trees flanking the sidewalk to the entrance. How chic is that? I don’t care how much maintenance they’ll be, for me, it’ll be completely worth it. 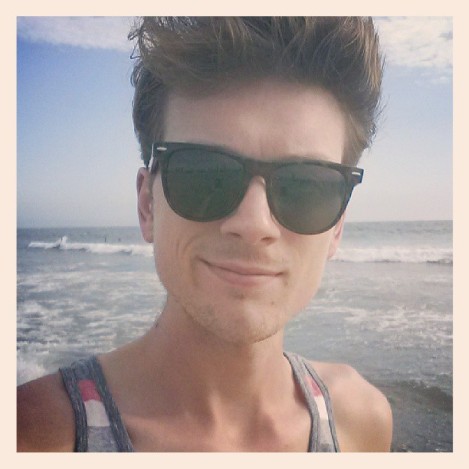 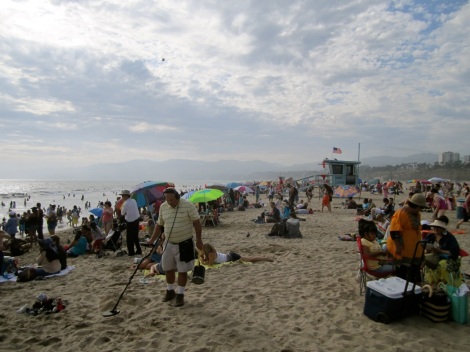 I walked and I walked on the beach, but then I decided to go to Joan Crawford’s house. It was reallllllllllllllllllllllyyyyyyy out of the way, but it was one of the main things that I wanted to see here in Hollywood. So, I shook the sand out of my feet, put my shoes back on and walked to Brentwood. 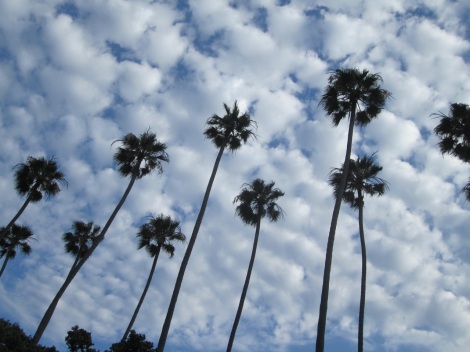 Reader, Brentwood is the most beautiful neighborhood I’ve seen in America. I’ve been to many, many places. I’m pretty confident that I’ve been more places that you. I’m not saying you’re a peasant, I’m just saying I’m well-traveled. (You’re #totes a peasant!) I couldn’t get over the architectural variety of the mansions and houses, but more than that, I am absolutely in love with the trees. OH THE TREES! I don’t know what they’re called, but they are absolutely magnificent. They might be even more dear to me than palm trees and that’s really quite a statement. I can’t even believe I said it. Whatever they’re called is unimportant, it’s more important the way they captivate me. I love the way the thick trunk shoots to the sky before unexpectedly sprawling in all directions casting dark shadows with its canopy of leaves. Foul smelling little fruits litter the sidewalks, but for me, that only adds to their sinister and macabre appeal. My favorite part, though, is the roots. They’re near the surface and monstrous and spread out marvelously from the trunk. I can’t get enough of these trees. I think they’re called Coral Trees, but I’m not one hundred percent on that. 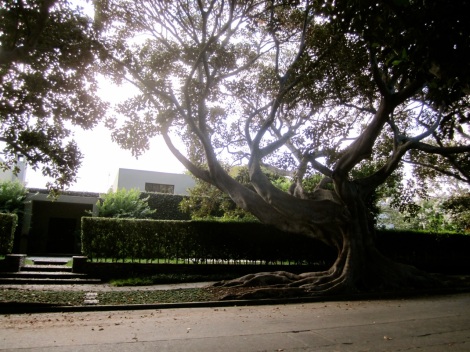 Are you caught up now?

So, I ran and ran down Bristol until I found myself standing in front of the gates of 426. I immediately teared up. I’m not ashamed by this. It was like going to Mecca for me. Joan had walked in this house and she had lived in those walls and been in this garden and she had walked this street and she had been there. All that mattered to me was that she had been there. I’m weeping now just remembering it. It was probably one of the more emotional experiences of my life. 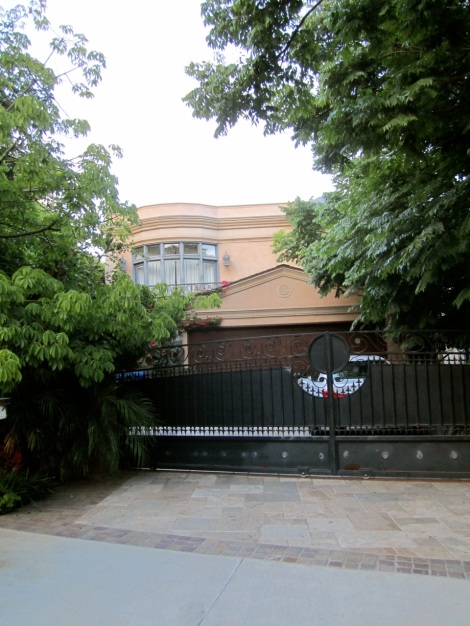 I don’t think I can really adequately tell you all that Joan Crawford means to me. She is an icon and an idol and a role model and even a friend. It sounds silly, but we all have the people we adore in our lives. Mine just happens to be a long dead queen of Hollywood Royalty. Just being there meant so much to me.

The house has been extensively remodeled since her time there and it was almost unrecognizable from the pictures I’ve seen of it back in the 50s. That didn’t matter, though. She had been there! I had been there were Joan had been! Bucket list item crossed off right there.

I shouted, of course, the following, “CHRISTOPHER! CHRISTINA! DAMN IT!” and “YOU LIVE IN THE MOST BEAUTIFUL HOME IN BRENTWOOD!” Just because I don’t believe in the historical truth of Mommie Dearest doesn’t mean I can’t adore it. And I do. It’s the greatest camp film in the history of cinema.

Walking back down to the beach was painful. IT WAS A LONG ASS WALK, READER. It was a little over four and a half miles each way. I was tired. I was so very tired. But, I saw the Aero Theater which was playing a Marlene Dietrich film and I really wanted to go, but I knew that I would never ever get home if I did. I regret not going.

I walked and I walked and I walked, but I finally made it back to Ocean Drive where I proceeded to wait for the bus next to another insane person. I don’t have a clue what she was saying. The lunatics don’t seem to speak in any known language. I think it might be what they refer to in that silly book, The Bible, as “speaking in tongues.” She would not shut up! Sweet Buddha protect me.

I waited and I waited. It was totally cold. Nobody told me how cold it gets until I got here. Like, yesterday, it was 61 degrees at night. ERMAHGERD, GUYS, I don’t function at those temperatures. I was in my little tanktop and my shorts and I was so miserable. I just wanted to go home to my apartment that was like the servant’s closet of one of those massive houses I had seen.

The bus did come eventually, and it took ages to get home and I don’t recall doing anything but collapsing into bed.