After my triumphant trip to Joan Crawford’s house, I decided to continue on in a similar vein and seek out another building that meant something to me. All of Bette Davis’ houses were far away and the house from Sunset Boulevard has tragically been tore down. You’ll never guess what it is now. A parking lot for a strip mall. This town is hideous, reader, I can’t get over it. There’s no charm whatsoever like in Chicago or New York or London or PARIS. Here, all you see are roads and roads and roads and sad shops. It wears on you. You have to take a walk through the residential districts to find trees, but even then, it’s dangerous because everybody drives like a maniac and you’re almost assured your going to be hit. Thankfully that hasn’t happened to me, yet. I feel very lucky. But how could they tear down the house where acting like this had taken place?

“No one ever leaves a star. That’s what makes one a star.” GENIUS. This is one of the finest pictures ever made, in my opinion. I’ve seen lots of movies, more movies than I’ve ever wanted to see, and this one will surely always rank up amongst the best. Gloria is a genius. I even have a massive poster of the film in a little hallway upstairs. I know every song on the soundtrack from the musical adaptation — which is also genius. I want to be the first man cast in the role or Norma…Norman Desmond. I live for this movie. It’s truly perfect. Go out and buy it. Don’t rent it. Buy a copy.

So, I got myself all prettied up and headed down Beverly. It was only a half hour walk from my apartment! Just think, I’m in the same neighborhood!

I stopped by my favorite bakery near La Brea called Schwartz and chatted about the weather with the wonderful woman who works there. She was impressed with my Hebrew today. I’ve been practicing. I bought two black and white cookies. I later gorged on them. They’re ridiculously good. Like, I can’t get over it. Then I decided to have breakfast at Susina’s, a French style bakery on the other side of the road.

I NEARLY DIED GETTING THERE BY ONE OF THOSE DAMNED RECKLESS DRIVERS! Bitch, I’m a pedestrian!

I had a mint lemonade that was really good. I’m kind of obsessed with mint. I love mint in everything.

It was HOT out today, so I was glad to have my minty lemonade. 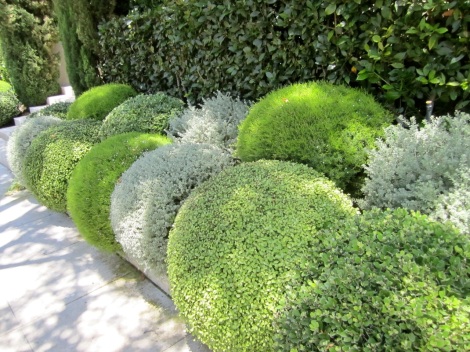 I stopped and looked at that hedgerow. I love it. 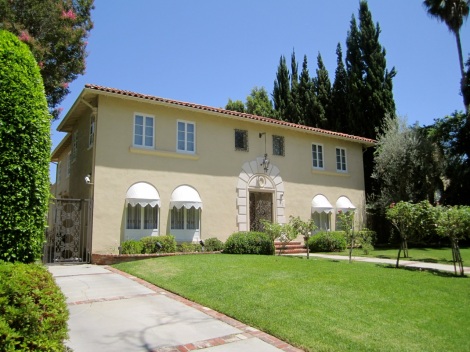 And then, there it was in front of me! It looks just like it did in the movie! I was so excited. There aren’t gates out front like in the beginning of the film, but I don’t recall them later on in the picture, so maybe that wasn’t part of the original place. Here’s a picture of Bette Davis at the door! 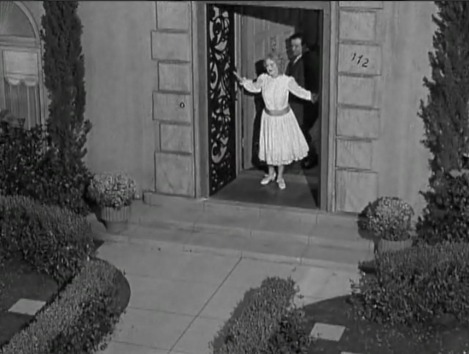 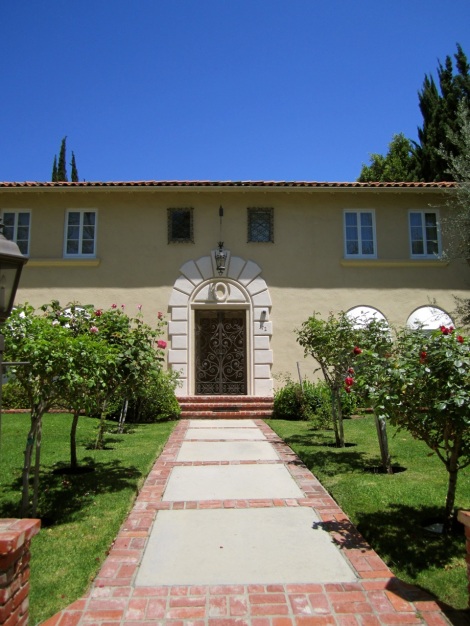 “BLANCHE! HE’S GOING TO TELL!” I shouted at the house before realizing how insane I looked. Upon realizing that I looked like a lunatic, I continued, “You wouldn’t do these terrible things to me if I wasn’t in this chair.” “But y’are, Blanche! Y’are in that chair!” 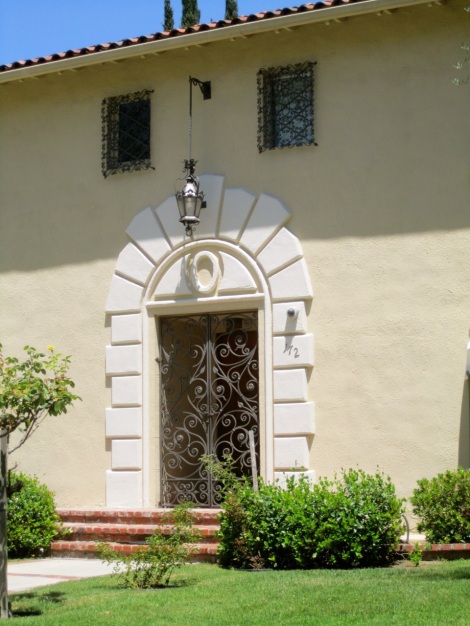 Then I started singing, “I’ve Written a Letter to Daddy,” before scurrying off since I was getting strange looks. Can’t help it. Sorry, losers!

Then I sang this one because I adore it:

That’s probably my favorite video on the Internet, by the way.

I had a marvelous time.

I’m near the La Brea tar pits, so I thought I should probably head over there and take a look at them. I’m not really into dinosaurs or things like that, but it’s there, so why not?

IT WAS SO HOT. I love the heat, but it was almost intolerable. 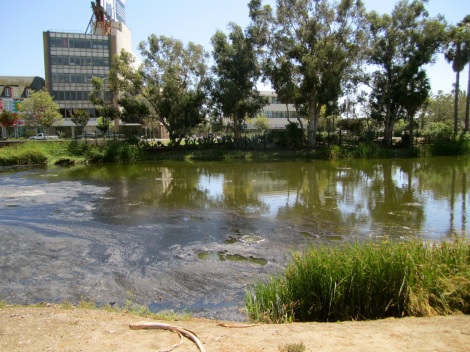 It smelled, unsurprisingly, like tar. I was bored, so I left.

I decided to pick up some food at the Farmers Market so I began what felt like an endless walk to Fairfax.

I saw a museum with a strange, but wonderful piece of sculpture out front. 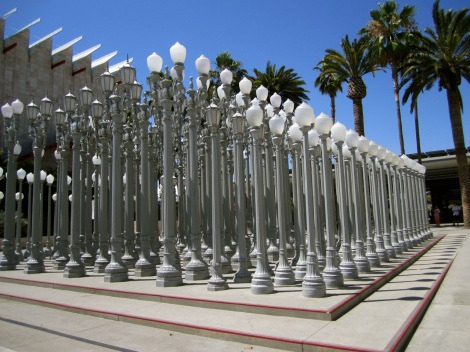 They light up at night! That would be pretty to see.

Then I saw this and nearly fainted: 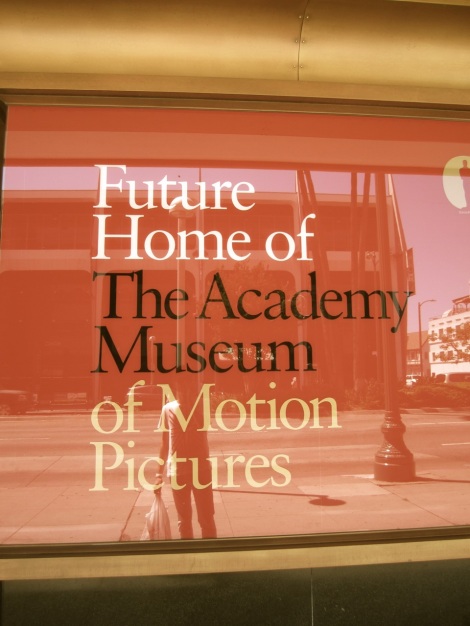 I finally found myself near the market, but decided just to go into Whole Foods instead. (They have air conditioning.) I bought stuff for tacos. I love a good lentil taco. They’re so easy reader. Just boil up some lentils and season to taste with taco seasoning. I sometimes sauté and onion and toss that into the mix, too. You won’t miss the meat for a minute. I think they’re more delicious than meat anyway, and nothing died. I LOVE BEING A VEGETARIAN. Gloria Swanson was a vegetarian, too. You should read her book Swanson on Swanson. It’s the perfect autobiography.

I wandered around the Farmers Market for awhile before I felt like passing out and stumbled into a French import market. I don’t understand why they called themselves that because they have tons of Italian and Spanish food. I didn’t see anything super French there. They didn’t stock Oasis, the best beverage in all the world. So, I don’t think they’re all that great.

I was tired and hungry, so I rode the trolley back through the Grove and decided to go into a cute little shop called Potato Chip Deli which is right across the street from my apartment. I was charmed from the beginning. I mean, look at the place: 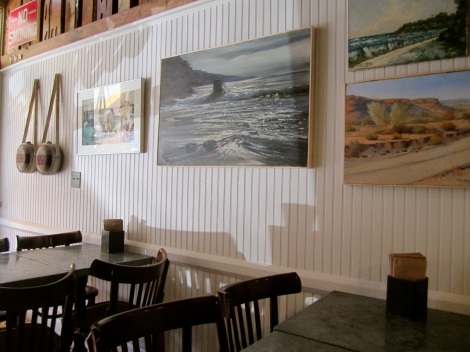 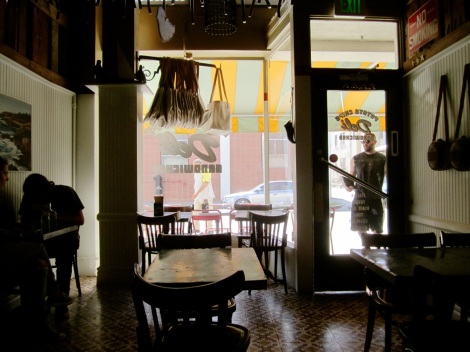 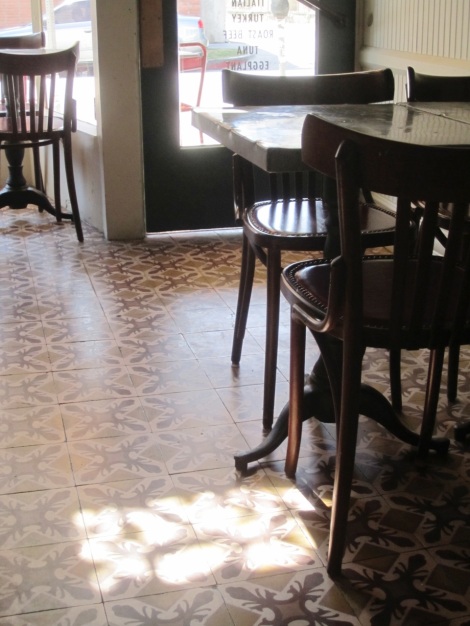 It was gorgeous. I love the tin-top tables and the antique tiled floors and the chairs that hung from the ceiling and the enthusiastic staff. I ordered the caprese sandwich with a fresh lemonade and a bag of kettle chips. I FREAKING LOVE KETTLE CHIPS. As my dear should-be-friend Jennifer Saunders said to my other should-be-friend Dawn French, “Do you remember the day you discovered Kettle crisps?” Wasn’t it a magical day?

The sandwich soon came out and I absolutely adored it. I’m mad about it. I’m crazed about it. I’m obsessed with it! The bread was absolutely amazing. I’ve never had better ciabatta, honestly. I adore ciabatta and have forsaken making my own. I can do anything, but I can’t make ciabatta. It’s one of the few things I can’t do. Here’s a list: 1) make ciabatta, 2) twerk, 3) dress poorly, 4) can’t think of anything else. I’m pretty great. Not going to lie.

That sandwich was probably the best sandwich I’ve ever had. I’ve never been big on sandwiches. I used to love this one at Bakers Square, but it has chicken in it. It was amazing, too, but they took it off the menu. I wouldn’t eat it now anyway, so no big loss. Oh, God, they should make it with portobello slices!

The mozzarella was so good and the tomatoes were actually flavorful and there was enough basil and there was oil and, oh Krishna, I must have another before I leave. They won’t reveal the bakery of the bread, it’s a secret. I was amused by this and simultaneously annoyed. I do not believe in secrecy in the food industry.

I just wasn’t in the mood. So, I made my tacos. They were marvelous. It’s one o’clock in the morning now and I want one…bear with…bear with…I’m now typing with a taco. Good decision.

I didn’t want all the evening to be a bust, so I found a UPS drop box and took those ridiculous pants back. I give up on Bonobos. The next time I’m in Chicago, I’m going to try them on in the store. I fear shopping for pants online. It just doesn’t work out. Take my sage advice, reader.

It was dark and quiet and I had the most marvelous time luxuriating in my secluded walk listening to my Eartha Kitt playlist. It was ever so slightly chilly and the streets were deserted and the moon was bright and the palms rustled gorgeously — it was wondrous.

Then this song came on and I broke down:

It’s absolute perfection. It may not affect you the same way it did me, but I had happy tears falling down my face as I walked home. I miss Paris.

Unable to get to sleep, I started watching again one of Joan Crawford’s genius films, Sudden Fear. I’m going to San Francisco sometime soon, so it was nice to get excited for it with this film. Give it a watch. It’s a good one.