Last night, I realized that my ears were kind of full, so, after running around in a panic, I checked a home remedies website. They said that I could either put my own urine in my ears or use a hair dryer and warm them up. I decided on the latter. Surprisingly, this worked and my hearing was renewed! I slept in again, hoping to be well when I awoke, and I almost was. I don’t feel as bad as I have been feeling, so that is great.

Around three o’clock, I left to go the Père Lachaise Cemetery, hoping desperately that it would be open. Today, it was in the mid-40’s and there is no ice or snow anywhere in Paris, so they have no excuse to put up that dreadful closed sign. On the train, there was a woman, probably in her 60s, dressed entirely in clothing for a girl in her 20s — but she pulled it off well. She had purple leggings and knee high boots and such. It made me smile.

I have noticed that the French love oranges, no, they adore them. Around every trash bin, on the floors of every Metro, and scattered on the sidewalks of all of France, there are orange peels. They gnaw on them wherever they are at — the ancient, the youth, the adults, the infants. They gnash the fruit away from the skin and then scatter them all over the ground. I find it fascinating. I wonder why they all like oranges so much? Probably because they are much more exotic than they are back home. We get them from Florida and California, they get them from some tropical island — that must be it.

At the last train stop, I was irritated to hear two very loud, very large American woman talking about going to the cemetery. Here is what they said:

I cringed and wanted to smack the both of them for their cultural illiteracy, but I opted to dash out of the train looking harassed instead. Imagine my horror when they followed me all the way to the cemetery.

Joy of heavenly joys! The doors of the cemetery were flung wide open and with the utmost ease I slipped into the Metropolis of the Dead!

I had no idea how big the cemetery would be, hundreds of thousands of corpses strewn about all over the place, along nonsensical twisting roads and alleyways. It was impossible to find anything at all, but it didn’t bother me because it is one of the most amazing and beautiful places in Paris. This, and the area around the Louvre, are my favorite places in the city. The Louvre is a fun place to people watch, but the cemetery is a great place to be alone. You can go for hours without being seen if you choose the right areas.

An interesting thing about this place is the sense of dilapidation. Most of the tombs are cracked, the glass shattered, the doors gaping wide open. Trees grow out of the bases of tombs and into them. It makes many of the areas look like they were abandoned long ago. It was very much like the cemeteries in New Orleans, only more Victorian, and without the imminent threat of being killed by a gang.

Sadly, this place is like a museum in the sense that people rush off to go take pictures of things they know nothing about. Maybe five people in the whole place have read The Picture of Dorian Gray by Oscar Wilde, like I have, or have heard a song by Edith Piaf other than “La Vie En Rose” in a commercial for Valentine’s Day chocolates, like I have. As you may be able to sense, this really annoyed me. I was all alone at the tomb of Edith Piaf, quietly listening to “Et Moi” when people started to flock, hassle me out of the way, and eventually force me off. They, in turn, took one picture of each other, holding roses (how tragic) and then scampered off to find Jim Morrison or Oscar Wilde because they’re “famous.”

I decided I wasn’t going to try and find Oscar Wilde’s tomb today, so I just wandered around the empty areas. As I wandered in the beautiful solitude that is the cemetery, I came across the creepiest area — the WWII memorials. Usually, I like a good Holocaust joke, but it was so eery here, because it actually happened. In America, the war was all so glamorous and distant, but here it is still a very recent and painful memory. The sculptures were ethereal and haunting with emaciated figures and sunken cheekbones. It really creeped me out, so, I dived back into the old district. 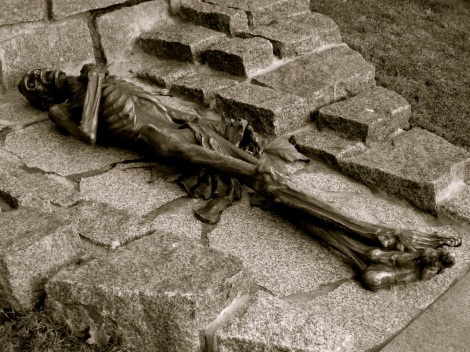 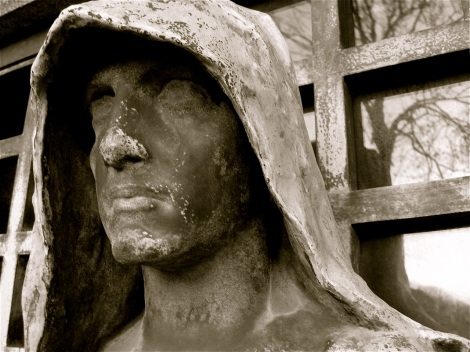 This area is truly a photographer’s dream with old sculptures, gothic tombs, dilapidated ruins and more. Here, it seemed all the families of the deceased were trying to outdo each other with gaudiness and opulence. It is such a beautiful area. One of them was covered in bat reliefs and carvings. I immediately deduced that this was the tomb of a vampire, so I stuck my head in and looked around, but just got cobwebs stuck in my hair. Fearing for my life, desperately praying that there was no spider in my hair trying going to pierce through my scalp and pump me full of venom, I jumped around like a lunatic.

I was bothered by the spider idea, so I quickly left the cemetery and headed home. On the way out, I passed by this massive building which I found out was the crematorium. 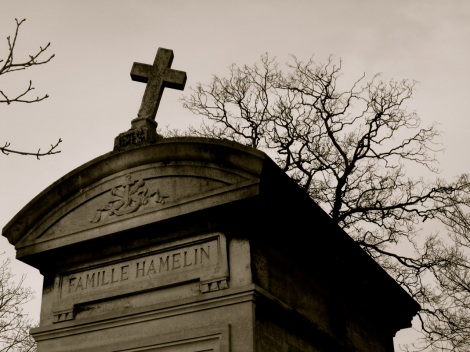 Creepy! I stopped at the grocery store on the way back and bought some chicken and potatoes. I watched Absolutely Fabulous and ate my dinner.

I don’t know what I’ll do tomorrow. Maybe I’ll stay in? I think I will. I have some sketching to do, and I need to organize my tool kit for school. Yeah. I’ll do that. Alright, bye…