Reader, I mentioned it the other day, but I’m going to bring it up again. I love sleeping so much. Like, I’m in love with sleeping. I’m having an affair with sleep. It’s wonderful. It’s amazing. When I’m working, I get about six hours of sleep, at most. I have to go to work and I have to do stuff around the house and I have to accomplish something, so I don’t have time for anything but the occasional nap that oftentimes eats up all of my night. The only good thing about those is that if I sleep all the way through the night, I won’t eat dinner and then I’ll get skinnier, but I usually wake up around nine or ten ravenously hungry and I eat more than I would normally. But, back to sleep. I’ve been averaging around nine hours lately a night and I have never felt more alive in all my life! It’s amazing. The bags under my eyes are even beginning to go away. Maybe I need to make more time for sleep, but then…I worry that I would have no life at all. Just thought about it…I’d have about five hours to myself every week day. That’s just not good enough. Sad. Why can’t I just retire already?

Once up and with a boiled egg in me — those things are wonderfully filling — I headed off to the Grove to see my arch-nemesis, Tyra Banks. I can’t understand her anymore. Ever since that All Star cycle of America’s Next Top Model, I’ve been lost. I watched the last cycle like this:

It just was…ugh…no. So, then she let men audition and you already know the details of that sob story since I never stop talking about it. I won’t get over this. I never will.

I made it there in plenty of time and there was already a big crowd, so I did what my father taught me to do, and I pushed and shoved my way until I was as near the front as I was going to get — next to the world’s most unpleasant woman. When you’re at a taping of EXTRA and you’re not stuck in the back, there are people all over. If you trip, we all trip. If you sneeze, we’re all coated in your germs. If you talk, we all hear you. If you send a text, we all read it. This bitch didn’t get it. Now, I’m an old-fashioned gentleman and I treat ladies with respect…unless they’re like her, then it’s on.

As we stood there in the sweltering heat, waiting and waiting for Tyra to come on, she was lunching and was seemingly in no rush to make her call time, the woman dramatically whipped her hair towards me, revealing her fake Gucci sunglasses, and said, “Could you, uh, give me a little room? Come on.”

I grimaced at her, looked around at all the people around me, and replied, “Please do tell me where I can move so that you’re more comfortable, madam.” They laughed. She snorted and turned back. I intentionally got closer to her and managed to shove her several inches to the side thanks to my new friends in the crowd. We hated her. She was horrible.

People started shouting about Gwen Stefani. I guess she had been there earlier in the day having luncheon. She must still have been shopping. If I had seen her, I would have loved to hurry away from that dreadful woman and see Gwen and shout, “THANK YOU FOR TEACHING ME HOW TO SPELL BANANAS!”

But, I decided to stay in my spot and watch Mario Lopez give away surfboards. Boring. Finally, Tyra emerged from the restaurant surrounded by her entourage who were touching up her makeup and primping her hair as she walked the bridge across this silly little pond in the center of the Grove to the EXTRA set.

She looked so strange to me. Tall and shapely, but seemingly unlike how she photographs. It’s very true that models are strange looking in real life. They produce a more ethereal quality in photographs. That’s probably why I’m not a signed model, too classically handsome, you know? When her entourage was satisfied with her appearance, the interview started and I’ve never seen something so ridiculous. 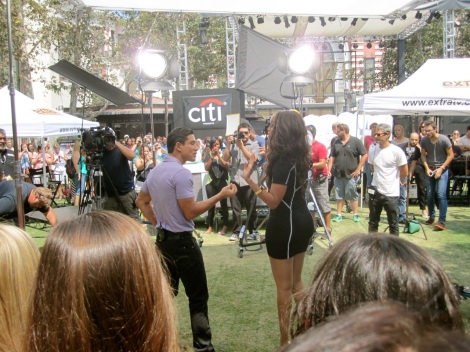 Mario and I are very close now since I basically live on the EXTRA set. He and Tyra about came to fisticuffs as he was arguing about what a fool she was not to put me on the show. 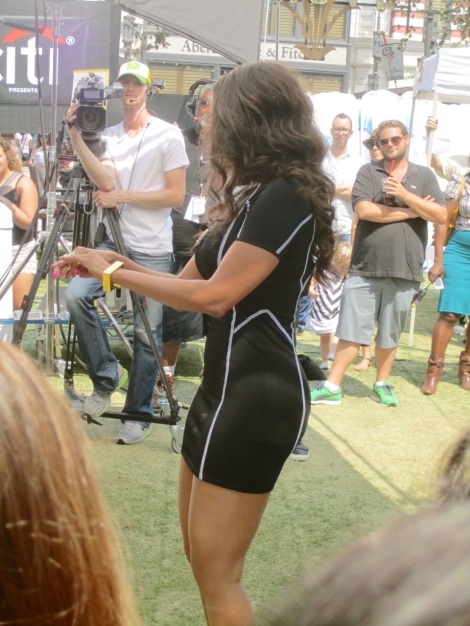 Tyra began to lose her balance after this onslaught.

She ran to her entourage to get fixed up after the fight. She was sweating bullets when she realized what a fool she had been not to cast me. 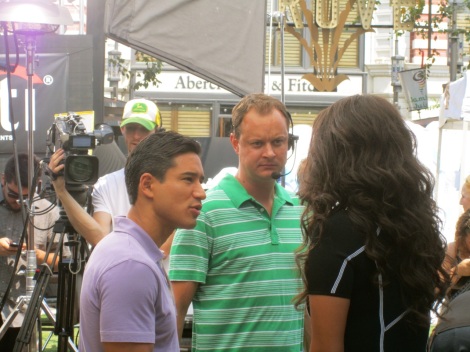 Mario tried to use reason, but she wasn’t having it. The man in green just shook his head in disgust. 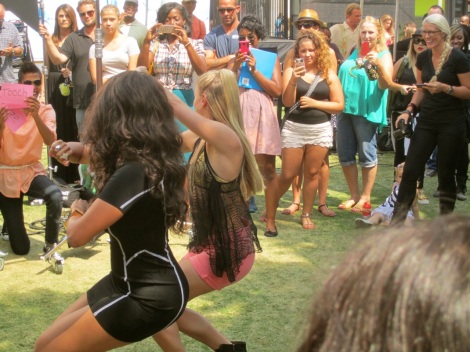 She tried to distract us all with a dance. 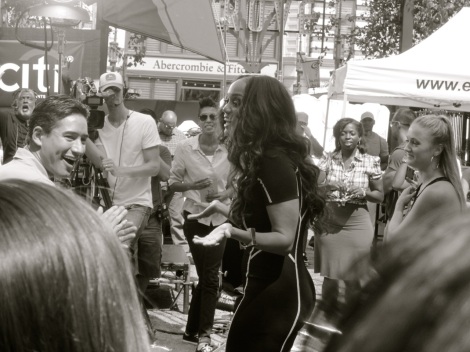 At this point, Mario turned to me and said, “You’re better off without her, Ben, my good friend.” 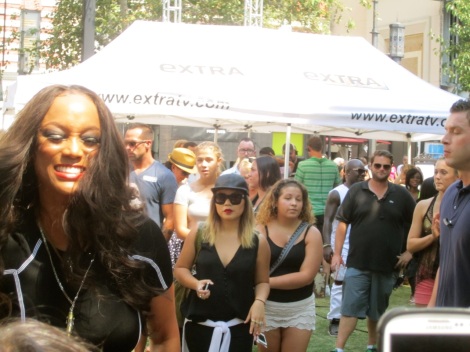 For reasons that I will never understand, and I can only imagine how Allison Harvard felt in every episode she was on, there is now a dance for cycle twenty of the show. I say dance, but it’s just a bunch of rhythmic swaying that makes you feel like a total fool. Yes reader, I partook of the dancing. The entire crowd was asked to dance along with Tyra. When that footage plays, you are going to see my eyes rolling so hard they snap and fall out of my skull. There are five moves, just prepare yourself: 1) Cycle 20 Arms, you cross your arms in an  “x” and then make a two and a zero with your hands, sway, 2) Tooch, stick out your ass, but not like a ho, 3) Booch, same thing but for gentlemen…Tyra thinks that men should stoop over and throw a fist in front of their crotch…I grimaced, 4) No-Neck-Monster, you tuck your head into your chest and hold your hands above your head, and 5) Smize, do this into the camera and wave your hands about. Combine at your pleasure. I felt so stupid. 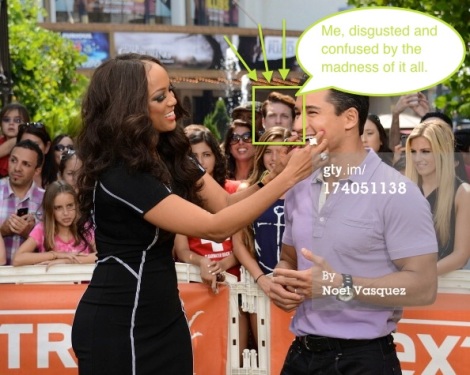 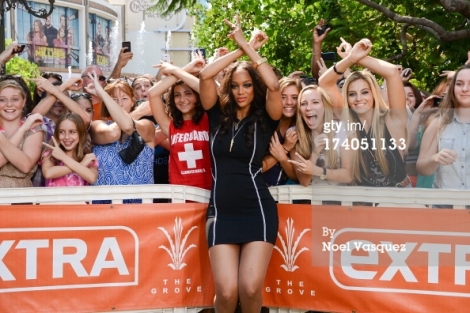 Then she was gone and I almost felt relieved that I didn’t make it onto the show. My friend, Mario Lopez, was right. I’m not ridiculing her or the show, but I kind of think I’d turn out to be the annoying one who quits the contest, the one who throws her (his) hands up in disgust and says, “Sorry, I’m not wearing a bikini,” (I would. I’d do a nude shoot.) and walks off set while Mr. J (why are you gone?) looks on in shock. I just couldn’t deal with it. I love fun. I’m the funnest person in the world, but at some point, you have to have some respect for yourself (which I don’t have when it comes to celebrity, but I might reach a low point on that show.)

Relieved that the insanity was over, I went over to Trader Joe’s for some orange juice and cheese. Lord almighty, that is the most amazing orange juice I think I have ever had in all my life. No joke. I’m passionate about Simply Orange, but this one might be even better. I’m going to do a side-by-side comparison soon.

I was not feeling all that well. Some days the heat really affects me negatively. A few years ago I had a heat stroke or something and I tragically wilt once in a while if it’s too hot. I hate it because I adore the heat, but thankfully it’s not too serious and I seem to be getting better as the years steadily march on. But today it was pretty bad. I took a break but then decided to get out and do something. I looked at my list and thought Little Tokyo looked the most promising, so I set out for there.

I took the subway there and was absolutely thrilled to do so. I love subways. I’m basically the Joe Biden of underground trains. I’m passionate about them. I think we should have high-speed underground trains crisscrossing the nation. I would gladly let them dig under my land. Wouldn’t it be wonderful, though, to head to your local station and take a two hour train ride to Chicago? Even if it was aboveground? I can’t think of anything more delightful, honestly. I can. 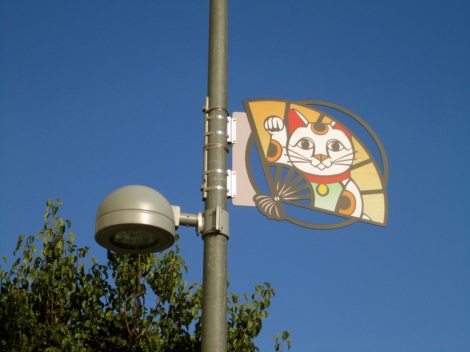 I was a bit turned around when I first made it to Little Tokyo, but I soon found my bearings and was then surrounded by those wonderful people. The Japanese are some of my favorites. They’re so cheerful. I don’t know what it is. I need to visit Japan still. I am looking for a trip over the holidays since Egypt had another political uprising. Can’t they just settle down so I can go see the pyramids and weep onto my camel I’ve already named Bertha?

The reason I wanted to go to Little Tokyo, aside from the charming inhabitants, was to visit a French bakery called Frances Bakery. They make something like a cronut and I’m sick to death of hearing about cronuts, so I went off to eat one. They were sold out. Oh well. I’m just going to make one when I get home. Looks easy. Instead I had a green tea macaron, an espresso, and a passionfruit-mango cake. The macaron was absolutely dreadful. It tasted only of white chocolate, not green tea at all. The espresso was a true double shot, which pleased me. The cake, though, was a triumph. It was alternate layers of genoise cake and mousse. Loved it. So flavorful. The staff was a bit unwelcoming, but it was a good shop that I approve of. Not the macarons, though, beware of them. 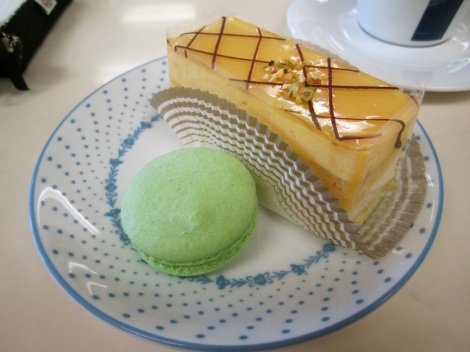 I walked back up to this little plaza that was full of Japanese shops and had a charming time walking around. There was a macaron shop that I read about in my research last month called Lette and it was gorgeous, but the macarons were not very good. The raspberry was the only decent one and that upset me. I hate a boring macaron. 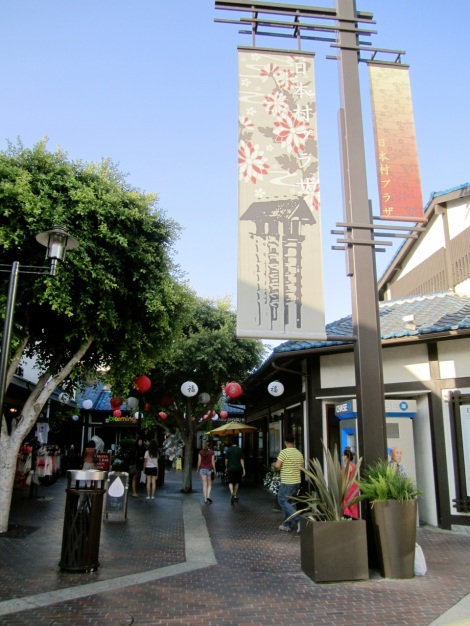 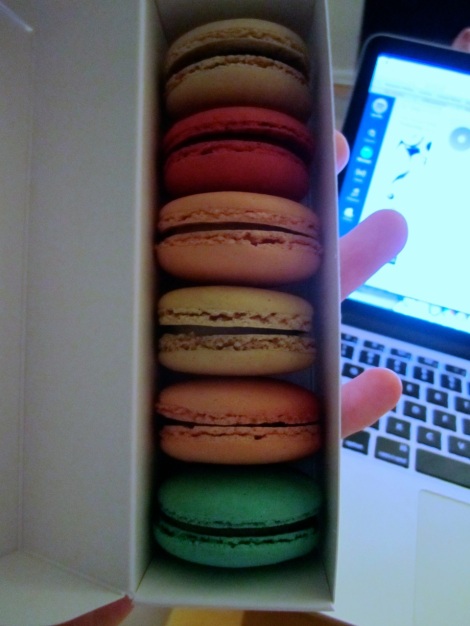 I had a nice time walking around downtown and looking at the skyscrapers. I love skyscrapers. They are a great comfort to me for some reason. There was lots of lovely architecture and I walked by the Edison Bar, a ridiculously pretentious place that I would have loved. 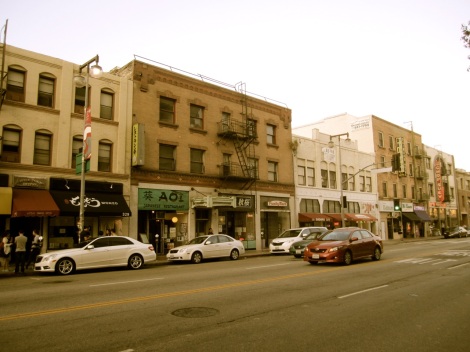 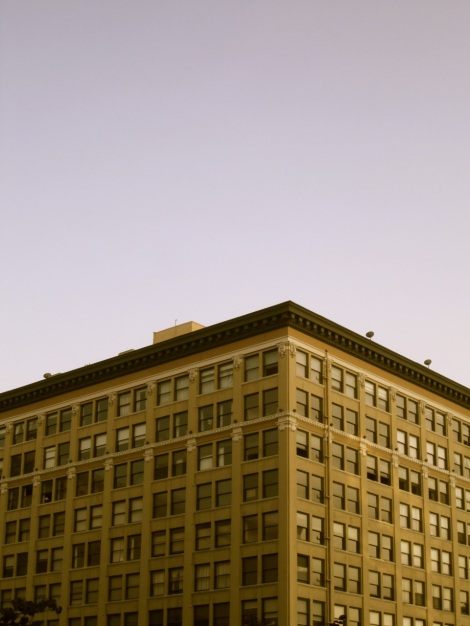 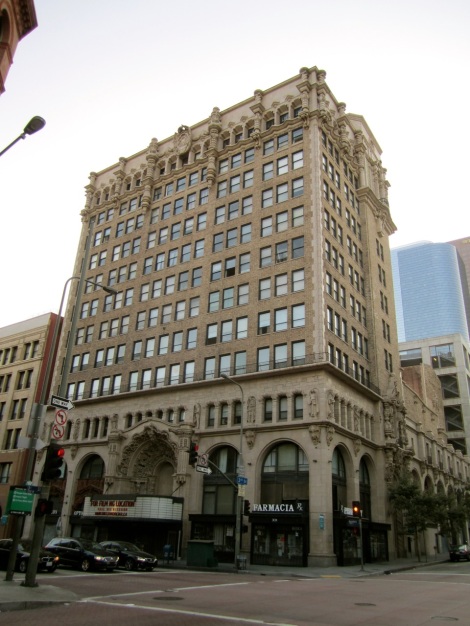 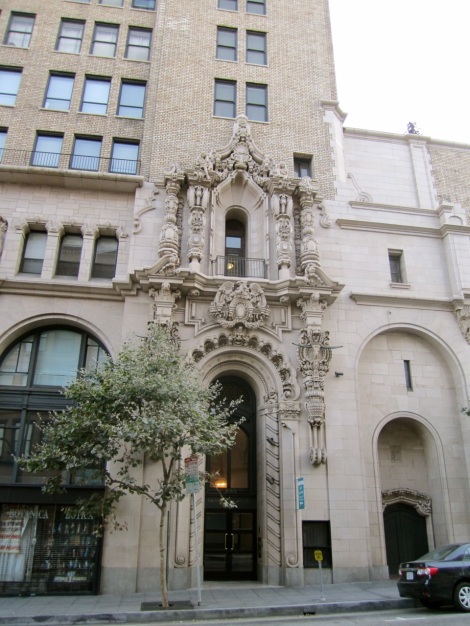 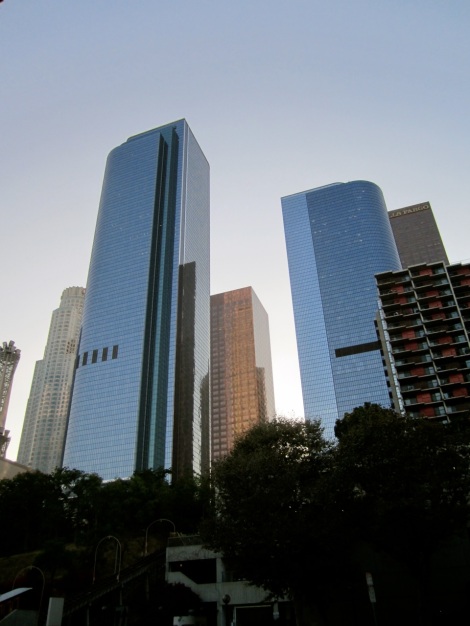 And then I saw a Parisian toilet! 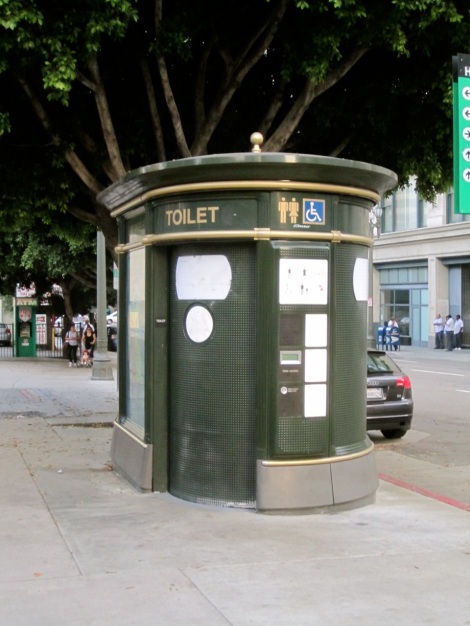 It was soon time to catch the train and then catch a bus and I thought I’d head over to the Grove quick to take a look at Kiehl’s. I needed some kind of exfolliant for my skin. It’s looked dull lately. I ain’t got time to be unattractive! I found something and grabbed a lip balm, too. IT WAS NINE DOLLARS FOR CHAPSTICK, READER. It was already rung up, so I didn’t protest, but that better be damn good shit.