I admit, with all the humility in the world, that I make the best omelette that’s ever been made. It didn’t come easily, but after many failures, I finally came upon a foolproof way to make them (courtesy of David Lebovitz’s fabulous cookbook, My Paris Kitchen.) You only use two eggs and a large skillet. This goes against everything else I’d ever done, but it’s flawless, especially with some goat cheese and a little salad on the side…and a slice of artisanal bread that you’ve made yourself. (Bakery bought is fine…if you must.) But, I think I may have been nearly outdone by the Olympic Flame Café on Geary Street. Then, again, I don’t think what they made was a true omelette, but I don’t care, it was fabulous.

The day started, though, when our apartment host knocked on the door to inform us that the building was leaking. Water was spraying everywhere on some other level, but nowhere in our room, thank Beysus. I had to stare at the sink whilst holding an old-fashioned wireless phone and tell a plumber if I saw any substances come out of my sink. That was alarming, but thankfully nothing came out of either of the sinks. It was an odd morning. 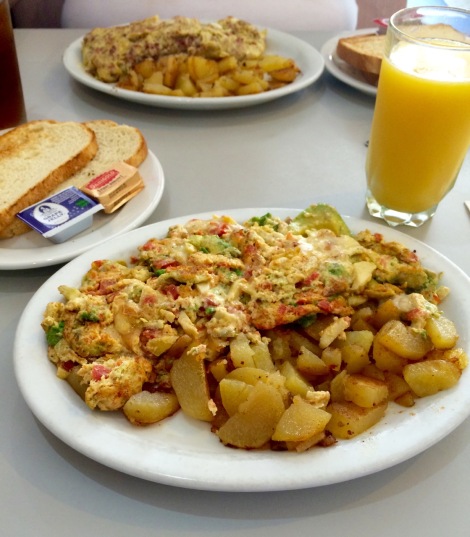 So I was glad to be at an old-fashioned diner that only served breakfast and lunch. I ordered an omelette with tomato, artichoke hearts, and avocado, and it was a triumph that I will be regularly recreating whenever I get back home.

Dessert was mandatory, so we stopped in a little pastry shop at Macy’s:

I took Jessica to Daiso, a shop on Market Street that sells Japanese products for $1.50 each. Fabulous! I loaded up on grapefruit flavored cough drops and little plates — just can’t resist them — and then we headed up to the Ferry Building, which Jessica thoroughly enjoyed. Finally she likes something. And how could you not enjoy the Ferry Building? It’s filled with food! We bought everything. And we were having a good time. And then Jessica nearly had a panic attack when reading a rumor about a One Direction member having a child — what foolishness — and her day was done. And I wasn’t in the mood for much, so we went back to the apartment for a while until it was time for dinner.

We went to a hotel restaurant called BLK that looked gorgeous, but was the very definition of mediocre on the inside. I had risotto and salad and it made me terribly ill. I felt like Jessica. Don’t recommend. I do recommend posing in the sitting room, though.

The next day, Jessica couldn’t be bothered to go anywhere at all, so I decided to do a bit of wandering by myself, which suits me just fine. I wasn’t really sure what I wanted to do with my day, so I began to wander at random. Eventually I found myself going through the doors of Britex, a fabric store right next to Chanel. Classy enough for me.

“Have you been before, darling?” a man with a waxed mustache asked me when I looked around at the hundreds of bolts of fabric…thousands probably.

On the very top floor of the shop they sold remnants of fabric at a discount, so I went up there. I was looking for a few yards of something ridiculous so that I can get a shirt made…or make it myself…but I’d rather have somebody do the work for me. I found a beautiful print of safari animals in blue that I simply had to have, so I did. The staff was all so friendly, asking me what I was going to do.

“Good choice,” one assistant exclaimed as she hurried past me.

Another looked thrilled when I said I was having a shirt made, “It’ll bring out your eyes.” I started to wonder if I was in some episode of the Twilight Zone where all evil and rudeness had been decimated. It was unsettling to be around so many friendly people. One literally jumped up and down when I said that I get my shirts fitted by a tailor.

Dazzled by all that, I stepped onto the street, saw the Palace hotel and made a beeline directly for it. I love me a palace. And I made an excellent choice to stop by. I’m always dressed decently, so I don’t look like a hobo looking for refuge in a four-star hotel. Nobody bats an eye and I make my way in to study the sumptuous interiors. I do this everywhere.

This one was particularly gorgeous, so I sat in the crystal room and had an excellent gin and tonic whilst appreciating the splendor surrounding me.

A woman sat beside me with a Louis Vuitton bag and I discovered what it was that I wanted to do with the rest of my day: FAKE BAGS in CHINATOWN.

Certain of my impending success, I leaped onto the streets and into another world. This is the most attractive of the Chinatowns I’ve been in. I saw every single inch of it. Do you know what I didn’t see? FAKE DESIGNER BAGS. Why not? When I was in New York City years ago, they were all over the place. You could buy pirated DVDs in two minutes! It was a glorious time for crooks.

It seems that everybody has gone further underground so that the police don’t shut their shops down, but the illegal bag trade is still allegedly going strong — I wouldn’t know. I read several articles online about what to do, the questions to ask, the people to look for. I did everything right, but they all seemed suspicious of me. I got close once, but I never made it into one of the backrooms where the illicit goods are stored. I have rarely in my life been so disappointed. I was devastated. Why was it so hard to procure a faux Louis Vuitton duffel? I just wanted to be chic on a budget. I don’t mind a fake. I’d buy those Saint-Laurent boots I want so much as a knockoff if I could find them.

Close to weeping over my failure, I stopped for a much needed Irish coffee:

As if he knew how upset I was, my father texted me telling me to book a room for a night at the Palace for Jessica and I. For a man who doesn’t exactly live for luxury, he’s a great fan of spontaneous luxurious excursions. Thrilled by the idea, I booked a room for the next day. Jessica and I needed to get away from that dump we were staying in. (It wasn’t really a dump…but it wasn’t exactly a treat. The mattresses were so thin that the springs bruised me, reader.)

Jessica took a car up to Greens, and I walked along a pier before I could tell her the good news and have dinner. 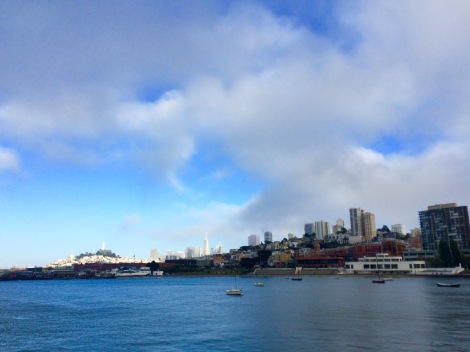 I adore this restaurant; everything is vegetarian and excellently cooked. I had something that reminded me of a tower of ratatouille and grilled polenta. It was wonderful. Jessica didn’t enjoy her meal quite as much, but she’s not a vegetarian, after all.

The view of the Golden Gate Bridge was wonderful, and we watched the sea lions hopping up and down onto the boardwalks with great delight.

Then we returned to that little room for one last night of discomfort. I slept easily knowing it was my last. The Palace sat on the horizon like a siren, calling to us.

One response to “Before the Palace”