Actual footage of me today:

But I wasn’t quite in Paris, yet. I don’t know why I’m ever anywhere else, Paris is perfection.

Well, Dublin Airport is like any other airport in the world. None of them are very different, though. No leprechauns, no beer, and no clovers, so I think they did a good job at not exploiting their culture.

I like airports, though, because they have such a thrilling energy. So many people going in so many directions! Maybe it’s Dubai or London or Moscow or some little town in Spain! And everybody is on the verge of adventure. And the food is crap. It’s always crap. I settled on a Diet Coke for breakfast. No regrets. Obligatory Édith Piaf singalong:

Soon I was on the plane — in row 8, mind you, basically first class — and we were winging it across the English Channel. I was giddy. Paris is everything to me for a million reasons I could carry on all day about, and a million more reasons I can’t begin to describe. It’s the most beautiful city in the world, and everything about Paris completes something within me. There is a Julia Child quote that I’ve always related intensely with: “Paris is heavenly. Such fun to wander about in it…I think, more than ever, that I shall never get over Paris, and never find anyplace more to my tastes. Every thing about it satisfies everything in me.”

Oh, there are so many Paris quotes I could post now…I have a file of these…why not?

“Paris for me is happiness; it is everything I prefer, from the point of view of culture and the art of living.” –Pierre Hermé

“They were students; and when one says student, one says Parisian: to study in Paris is to be born in Paris.” –from ‘Les Miserables’ (Literally me.)

“To lead a life of any interest, one must first spend time in Paris.” –Gertrude Stein

I got to chatting with my seat-mate, Anne, who is also a writer. We had a nice talk and she invited me to hear her godson sing at the Jardin de Luxembourg. That sounded all right to me, so I planned to do that later in the week.

Once the plane touched down, I was ready to go, so I flew through the airport to the RER. From there, I easily found the apartment — my internal GPS is fabulous in Paris. I could get anywhere from anywhere on instinct alone. That’s not true anywhere else, mind you! I was met by a nice man who checked me in, and I was at my leisure at once. It’s a nice apartment. Quite spacious, though it lacks an oven and a dining table. I don’t understand how anybody can eat when they aren’t at a table. I don’t mean a little snack while watching the television, but how are you supposed to enjoy a nice plate of pasta when you’re perched on a couch? Just can’t do it! That was my only complaint about the place!

I hadn’t slept in what felt like years, so I collapsed for hours. 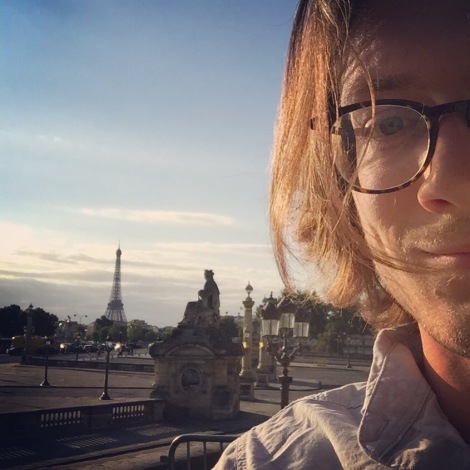 When I woke, I hurried out to the Place de la Concorde to take a picture with the Eiffel Tower. I looked like actual garbage. But, it worked, and I made my travel announcement on Facebook. 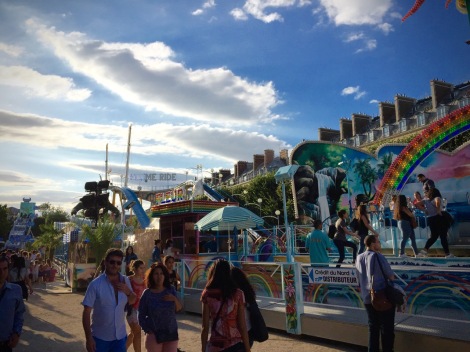 It was getting quite late, so I hoped that my favorite bakery, Miss Manon, would still be open. And it was. And when I went in and saw my old woman, who is always there no matter what hour of the day, I had to hold back my happy tears. I don’t know how old she is, but she’s about five feet tall, dyes her hair the most ridiculous red, and looks like a grouch but is really the biggest sweetheart in all of Paris. I have no doubt that she has no idea who I am or how much I adore her, but she’s a Parisian monument to me every bit as important as the Eiffel Tower or the Arc de Triomphe. More so, actually; I could do without Notre Dame, but I couldn’t do without her.