After the harrowing time I spent stranded and abused in Italy, I was exhausted and wrecked emotionally. Not really wrecked emotionally, I suppose. I was just tired. All that stress and anger and strain really didn’t agree with my system, so I didn’t do much of anything for a couple days as my schedule readjusted after spending the entire night awake in Ventimiglia. I just went to restaurants and wrote and caught up on my love for Elvira. Seriously, she’s a treat. And basically a female drag queen. And I love her.

Oh, and I found a pet shop that didn’t sell pets…whatever.

Several days later, though, I finally felt well enough to go and see the towns away from Nice, and I hadn’t been into see Madame Betty for nearly a week, so I owed her a visit.

I made my way to the bus stop, waited an absurdly long time for the bus to arrive, and then watched in irritation as two guys were doing pull-ups with the bars that you’re supposed to hold on to so you don’t fall to your death or break your skull. I hated them at once. Mainly because I have tried on multiple occasions to have a bicep, but it doesn’t seem to be in the stars for me. Muscles in general. I tried to be a fit person for an entire year, but all that running and cardio and protein shake nonsense was just not for me. It literally drove me insane and I developed an eating disorder. I’m over that now, so, I’ll just stick to being a thin person. There are worse things in the world.

Finally at the train station, I bought a ticket and took off nearly at once for Villefranche. I was thankful that it is a very short journey, because an irksome youth was loudly playing Bruno Mars’s “Uptown Funk.” It’s a catchy song, but if I hear it one more time, I’m going to lose my mind. We did it for the staff dance at the end of the last school year, and I still find myself subtly following the choreography as it inevitably plays in every café, grocery store, car that passes by, and booms from every street performer’s boombox. Have we gotten over it, yet, in America? I pray to Beyoncé that we have. I can’t deal with it much more. I’m very thankful I rarely hear the dance we did the year before…what was it again…the damn thing was everywhere. Oh, that “Happy” song. It doesn’t make me happy anymore. We should dance to Fifth Harmony this year. That won’t happen. BUT IT SHOULD: 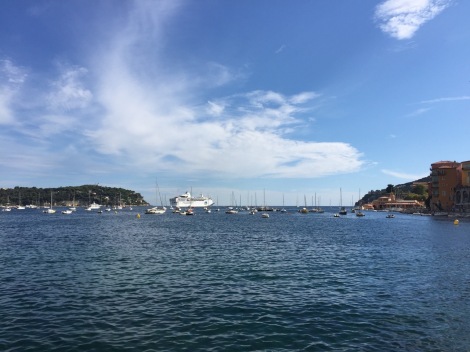 Once in Villefranche, I felt instantly at home, as I have every time I visited on this trip. I’m so thankful that my grandmother had a life here. I don’t think there are many things in the world that have influenced me more than her existence in that tiny village. She had actually very little impact on me herself, it was the world that she existed in that has turned me into this creature that I am. I was so enchanted with the idea of living in the south of France that I took French in high school, and from there, it was an unstoppable chain reaction into this over-the-top monster I’ve made of myself. But I like me this way. I went from being introverted, fat, socially retarded, unfashionable, and a general loser to an interesting person because of French class. Because I learned French, I insisted to be taken to Paris, and because my family has always (eventually) given in to my barrage of demands, I went. I fell in love with Paris and returned a few years later to live and study. That time there was when I finally blossomed into an independent person. I wouldn’t be who I am today without Paris, and I would never have had Paris without Grandma Betty, even though that’s a tangent that can’t really be quantified.

And so, Villefranche, her village, is incredibly important to me, even more so because I’ve made it my own. When I come into Chez Betty, Madame Betty comes out to greet me at once, we bisou, we chat, and it’s a marvelous couple of hours that have become my favorite experience of this trip. I will never forget the kindness I’ve found in Villefranche or from the people along the Côte d’Azur. It’s so different from Paris, and though I will always be a Parisian at heart, the relaxed atmosphere and way of life here becomes intoxicating once you let yourself get caught up in it.

I managed to get a great deal of writing done, with the help of two glasses of rosé and several shots of espresso, and I’m feeling excited about this project for the first time in a decade of musing and research. It finally feels like a cohesive story. I know now that it is because it is finally time for me to write it. I would never have been able to do justice to the story I know by heart in my head because I didn’t have the life experiences in high school and my early twenties that I need to tap into to flesh out the characters and the world they reside in. And I look forward to working on it. (If I ever have time with both work and school starting in a couple days…ugh.)

It was time to go, so I made goodbyes and barely made it out without uncontrollably weeping as Madame Betty said to me, “You will come back and tell me goodbye, yes?”

Of course I would, I reassured her, and then I sniffled all the way to the cemetery to check in on Grandma Betty’s ashes that we interred there.

For the first time in my time here, the skies were something other than cloudless and blue. A storm was brewing, and the threatening clouds were wonderfully atmospheric in the graveyard with mouldering vaults and statues reaching for the sky.

I made it to the station just in time to avoid being soaked by a torrential downpour that fell for about a half hour. It was glorious. The climate changed so much for the better after that storm. The humidity dropped perceptibly and I could walk around without sweating so much that I could have hosted an Olympic swimming competition on my forehead.

The train wasn’t long in coming and I was soon pulling into the oddly cavernous station of Monaco, the country where Grace Kelly was a princess. I had forgotten how confusing this little country is and how dense everything is pressed together. It’s not at all large, but you could easily spend days wandering around the Old Town and then the areas around the casino, which I have never managed to do justice to. 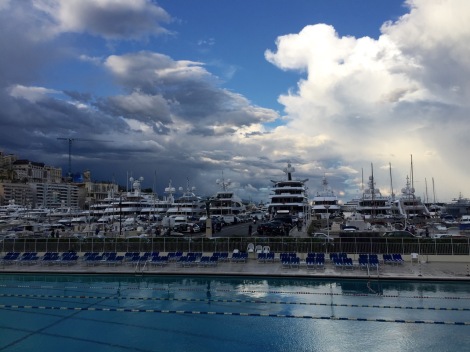 After gazing lovingly and hopefully at the yachts docked in the bay, dreaming that some fabulously wealthy Russian oligarch or vacationing millionaire would invite me aboard for a glass of champagne and convivial chatter before jumping off the deck into the sea…but that never happened…I set out to see the city.

You aren’t allowed to walk around in your speedo, which I felt was very restrictive. CAN WE LIVE?

I walked around the old town and marveled at how beautiful it was and mused on how wonderful having money must be. I’m not poor, but I don’t have MONEY, you know?

Monaco is like the EPCOT version of France. Everything is flawless. You couldn’t find trash if you tried. It’s stunning, if a bit sterile, but I will never deny that it’s captivating and a delight to wander through. The palace of the royal family is utterly forgettable, which is a great disappointment to me each time I see it.

But the churches are lovely, and the Musée Océanographique is easily one of the most breathtaking buildings ever built. The way that it juts out into the sea is mesmerizing and you simply can’t take a bad picture.

Quite famished, I sat down at a place randomly along the harbor for dinner. I could probably have chosen better, but a vegetarian does not get a lot of variety in this part of the world. You either get a pizza or a caprese salad. I inevitably get the salad, but that’s not a complaint at all, I adore them. They’re one of my favorite things in the world. This one was particularly bland, and the company on either side could not have been worse. To my right was an insufferable Englishwoman who was irked to no end that her granddaughter wouldn’t eat any more of her salad. Then she complained viciously about how white bread is bad for you and has no nutritional value…we would not have gotten along. On my left was a rich guy who spent the entire meal on the phone complaining that his much younger girlfriend had lost her passport on purpose. I was rather glad to get my bill and head to the station.

It was quite a wait for the next train to Nice, but I was able to see something I hadn’t expected: a Russian train came right through the station. It looked exactly like the one that Joanna Lumley had ridden on her brilliant documentary series, Joanna Lumley’s Trans-Siberian Adventure. That show was the first thing I watched on my trip, so it was oddly fitting to see the train plastered with Cyrillic slowly chugging into Monaco. I had no idea that Russian trains came down this far, so I will have to look into this. The Trans-Siberian railway is something I’d love to experience. The East is something I need to explore, but have never gotten around to. I must press further along than Egypt. The wonders of Japan and China and India are waiting for me. (And I have a great desire to see Pakistan and Jordan.) Someday. Isn’t it awful to realize that you’ll never get around to doing everything you want to do? That’s why I plan to live forever.

On my walk back to the apartment, I stopped for a scoop of passionfruit gelato from a little shop on the Avenue Gambetta that is open very late and is intensely popular. It was delicious and as I sauntered down the Avenue de la Californie, I mused about how much I really adore being an adult. So many people say that they wish they could go back to being a child, but I’ve never wanted that for a second of my life. I was eighty before I was eighteen, after all. I get to do whatever the hell I want, and I tend to.