Since I’ve been dying for the past two months — I really have to finish that blog I have on my diagnosis of Multiple Sclerosis — I haven’t had a moment to emotionally prepare for the voyage back to my hometown. Now, I may have misled a bunch of you, since Paris is by no means my place of origin. I was cursed with the commonest of births. And I haven’t spent the majority of my life in France. But, it is the place where I figured myself out, so that makes it awfully special. I learned to be Ben in Paris.

After a few months of pastry school, I knew the city like the back of my hand, and I feel like Paris adopted me. I have to go back as often as I can to maintain my sanity. Some people find it dirty or distasteful, but that just means they don’t get it. There are places others love that I can’t be bothered about. New York doesn’t call to me the way it should, for example. Paris, though, Paris does. She calls and she beckons like a siren. That’s bad imagery, since Paris would never dash me on a rocky shore and leave me shipwrecked to be consumed by hungry mermaids or whatever those things were. I’ve never been a big fan of Ancient Greek literature. Give me the “Tale of Setne Khamwas” anytime, leave Homer at home.

I couldn’t fall asleep to save my life the night before I left for the airport, so I popped a ton of popcorn and chortled to An Idiot Abroad for hours before I passed out, clutching my phone in one hand and a bowl of popcorn in the other. I love that show. Watch it if you never have. I assume my cat, Edwin, was very upset at the idea of my leaving him for nearly two months, so he turned off my alarm. Or I didn’t set one. Or I was just tired. Probably all three; Edwin has nimble little paws for a big cat. He’s trying to look innocent here, but failing:

So I didn’t wake up to an alarm, I woke up to Jessica screaming. Normal.

Running slightly late, we hurried off to Ankeny and then hurried off to Minneapolis. No hurrying was fast enough for me. I hate car trips. I hate sitting in one spot for more than a couple hours. I feel lazy and disgusting and miserable. To make it even worse, it hailed and rained the entire way there. That was bearable, reader. What was not bearable was Jessica singing the entire effing way. She was demented. Possessed. She would not stop. Now, I don’t mind a singalong, reader, y’all know that I wish life itself was a musical, but she sang nothing good. It was all crap. And it wouldn’t stop. I wouldn’t mind a Beyoncé song or something, but she sang nursery rhymes and crap from SpongeBob. I could not deal.

To shut her up, I had her read from Bob Brier’s newest book on Egyptian obelisks. For a librarian, she has a rather remarkably poor grasp of how to pronounce English words. Then she giggled for a good ten minutes about the name Sneferu. It is a silly name, but how disrespectful to laugh so heartily at a long dead pharaoh. I guess she was overtired. That’s her excuse anyway.

After a spell, the crew finally made it to the Mall of America, and we were soon feasting on Italian food at Tucci Bennuch. I’ve stopped counting how often I’ve been to that restaurant. It was one of the first that my family started going to regularly when they were finally convinced that spending a bit more money to get something better than fast food was a worthwhile endeavor. I’m so glad that happened. Eating Burger King for a meal is not something that I want to ever understand. Have it for a snack or for a cheeky little nibble, but don’t think of it as a meal. Gross.

And then we were off to the airport, which was right across the street, very, very, very early. If only we had known then that the reports of misery inducing TSA lines were nothing to worry about, we could have done some lovely shopping at the mall. ¯\_(ツ)_/¯.
When we got to check in, the gates weren’t even open, so Jessica and I slurped on iced tea and judged people. Nobody dresses for travel. Nobody dresses for anything anymore. It’s a pity. I was elegantly swathed in black, but everybody else was in sweatsuits. I am not going to wear a sweatsuit out in public. I did it once when I had an MRI, and I was more worried about wearing that than I was about the potential tumor in my brain. Is it just me that thinks this way? I’m starting to think so.

Finally, we could check in, and the woman behind the counter was our “ONE TRUE QUEEN.” Of the hour, anyway. Jessica and I have lots of queens. Do you have queens? These are people that are just fabulous, they aren’t actually royalty. Comment below. Anyway, she waved us over to priority check in. She must have known that people who dress nice for international travel deserve perks. Bless her. She was turnt for us to go to Paris and gave us plenty of suggestions of things to do. Jessica and I chortled richly, this wasn’t our first time to the Paris rodeo.

The line through security took all of ten minutes. I gasped. I clutched my pearls. Thousands of dollars of prescription medicine was waved through without a blink. Nobody frisked my genitals. It was a weird morning. It all worked perfectly.

We were hella early, so Jessica and I went to Surdyk’s for our traditional pre-boarding meal. We call it traditional even though we have only went once before. I had champagne and a sesame noodle salad. It was great. And we made plenty of jokes about the name of the place. How could you not? I will allow you to make your own because they’re all hilarious. Comment below.

An hour after that, we were seated on the plane, and I was thoroughly pleased with the arrangement. I was in the very first row that wasn’t first class, and I had hella leg room. This is important when you’re tall. And I’m not even the tallest person, but at six foot, it’s already cramped back in coach. I was stretched all the way out. My mock Saint Laurent boots were in first class even if I wasn’t. It was great.

But then we sat there for effing ages. It would have been all right if I could have stood my seat mates, but they were pretentious in the extreme. (Jessica and I decided to split up so that we could both have aisle seats. Great decision.) After what felt like a million years, the plane headed off to Reykjavik. I thought it was a long flight. HA!

The descent was fine, and we got to see the odd, otherworldly landscape of Iceland. It truly looks like another planet. I think I’d like to spend some time there exploring. They have a tour where you get to go inside of a volcano. That’d be a treat, I think.

Jessica and I scampered through the airport to catch our connecting flight to Paris. We were just in time to go through the passport control and make it to the gate before the flight was scheduled to leave for my favorite city. We had absolutely no time for nibbles, though, and that was upsetting. We love eating. It’s how we explore culture…that’s my excuse  for my extreme food addiction.

We joined a bunch of asshats on a bus and then were driven out to the waiting airplane. Once happily aboard we sat there for two and a half hours. Reader, this was unbearable for my ass. I was sick to death of sitting. I wanted to stand and walk and run and scream. I was exhausted. They told us that the loading mechanism to put our luggage in the plane was broken, so they had to load it all by hand. I was suspicious, but we didn’t die, so I guess it wasn’t terrorism. This took so long that we missed our spot at Orly airport, and we were delayed again. At this point, my hair was flat, and I was so upset. We got going, though, and I manically feasted on a tiny bit of hummus when the flight attendant came round. I didn’t care how much it cost. I WAS STARVING.

It was such a long flight. I was sick of planes. I miss the elegant transatlantic cruises that I’ve never been on. I keep saying I’m going to take one on my next trip to Europe, but I think I might be serious this time. I would love a week aboard a cruiser, slowly adapting to European time, whilst spending my days walking on the decks and breathing in the brisk sea air. Fits me right down to the ground.

Orly felt tiny, and it was a bit confusing. Jessica and I had never been there before. We are accustomed to Charles de Gaulle, where you hop on the RER B and scurry into town. At Orly, you have to catch a bus to the RER C and then scurry into town. It was way more affordable than the other airport, so I’m converted. I’d recommend this airport if you can choose your arrival. On the train, it was absolutely wonderful to see Paris again. It hasn’t even been a year since I was here last, but that was already far too long. To me, there’s just no better feeling than being in Paris.  Unfortunately, due to events of the last year, you see things like this in the Metro now:

Once Jessica and I made it to Clichy (the suburb we have adopted as our home), we took a wrong turn from the train station and had a bit of extra walking to do. It was annoying, because it wasn’t a pretty part of town, Jessica was overtired, and then it started to rain. We got on the right track soon enough, though, and shortly were in front of the apartment building.

The apartment is absolutely perfect. It think it’s the nicest one I’ve rented in Paris since I lived here years ago. That was a sturning place in the heart of the 11eme. It kind of created my personal aesthetic, I think. Ever since, I’ve been mad for a red refrigerator, chandeliers, and dentil moulding. Anyway, the host was nice, the apartment is spacious, it has two gorgeous if defunct fireplaces, there’s a good view, and the building has an elevator. Hella blessed. 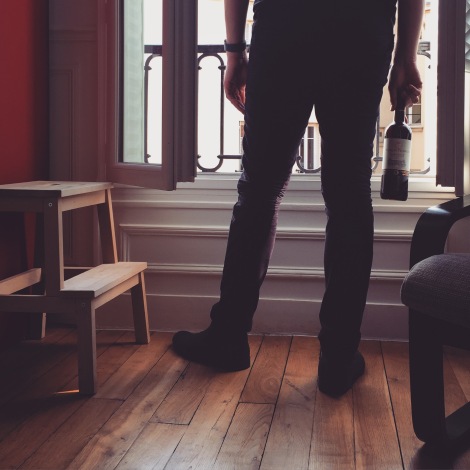 It was so good to unpack and clean up after nearly thirty hours of travel. I had had enough of that! We hurried off to Iolanda for dinner, and that was perfect. It’s always perfect. Paris is perfect.