The first few days in Paris were slow and luxurious. No big plans. Nothing to rush to or run away from. It was living at its most leisurely. I could hardly stand it.

I have never known how to relax. It’s a curse. Jessica could sit around all day, lounging on various surfaces, doing absolutely nothing, and have the time of her life. That’s not how I operate. I must always be doing something, plotting, moving, writing, baking, cleaning, sleeping, or absolutely anything. Admittedly, it’s usually plotting. I can hardly stand to sit for a couple hours to watch a movie. Typing this on the Eurostar is an extreme agony. I want to be up and walking around, not imprisoned in a comfortable chair. But, I suppose it was an all right introduction to a new time zone.

I get hit hard by the jet lag now that I’m an old man. I am fairly sure that I am aging at an extremely rapid rate, much more than the usual. I’m like reverse Benjamin Button but double speed. I wouldn’t be surprised if my hairs were grey tomorrow. I’m surely exaggerating. I do that all the time. Hyperbole is my normal.

I had wine for breakfast. That was nice. Turns out I’m a big fan of red wine if it’s French. I’ve never much cared for it before in the past and only order it on planes when it is offered for free. I don’t think that happens anymore, and that is another curse of the modern world. On the flight from America, we had to pay for absolutely everything. That’s all right, I suppose, we all need to make a dollar, but a free nibble is so marvelous.

Jessica and I headed out for the Champs-Élysées, and I had to sigh in disgust. It’s just not what it was. When I was in pastry school, the glamour had been there, though it was very faded. Now it doesn’t exist anymore. AT ALL. This famous road, which is for some reason an icon of Paris, is a hideously overcrowded shopping center for tourists buying things they can easily find at home. You should have seen the line for Ladurée. It made me queasy. You know my opinion of this shop, I’m sure. I really do not approve. The macarons are overly mature, the pastries are far from extraordinary, and the service is meh. You’d do much better to go to any other mediocre bakery in the city. Or go to Pierre Hermé, which is why I was on that godawful road. The only other reason you could ever find me on the Champs-Élysées is if I was stalking Karl Lagerfeld at one of the Chanel shows at the Grand Palais. I did that a few years back. Good time. I missed Karl totally, but I did catch a glimpse of the stage, and then I chased Jared Leto in the rain with a bunch of teenagers. (I always look back on that as one of the stranger mmoments of my life. What did Jared think of me?)

Pierre’s stand at the Publicis Drugstore was wonderful as ever, reminded me of the one I frequented every day last year at the Galleries Lafayette in Nice. They knew me so well after a couple days that they bagged up my grapefruit and passion fruit macarons without a word. Lovely city, Nice. I could live there. I have been thinking a lot about where I am going to buy an investment property someday in the future. That’s on the shortlist. (Villefranche-sur-Mer, Nice, Los Angeles, Luxor, and Brighton, if you were wondering.)

The woman behind the counter came round with samples and Jessica and I nearly died with the offerings. Pierre now makes these massive chocolate disks. They are insane. I can’t even begin to describe how good that creamy, intensely flavored chocolate is. I need to go buy a package of it because I will never be over it. I had a coffee flavored one, and I swear that it changed me for the better. What didn’t change me for the better were the hours of the department store. It is open until two o’clock in the morning every damn night. This is disgusting to me. Paris is becoming America and I won’t stand for it. I had to suffer years of shops closing for no apparent reason and then early. I had to deal with trying survive on Sunday’s when nothing was open. The new visitors need to experience the same and learn from discomfort. It’s how you become Parisian, I think. Tutting my tongue in disgust, I scurried to the Métro.

With our pastries in hand, we went off to visit the illegally interred ashes of my beloved cat, Tiger, whom I added to the thousands of corpses at Père Lachaise last year. (There’s another of those strange sentences.) I never before realized just how close my favorite cemetery in the world is to the apartment that I first lived in whilst I was a student at Le Cordon Bleu.

Soon we were amongst the graves. 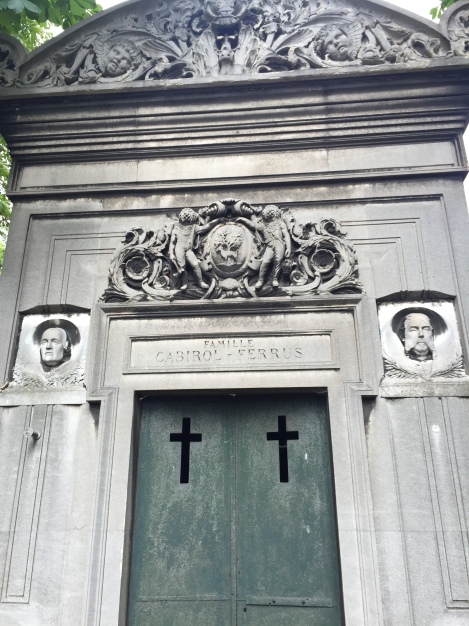 We spotted a particularly dramatic one I had never noticed before that had two brass men, very dead, with their hands intertwined atop a funeral bier. It was fabulous. Jessica was deeply distressed that they weren’t starcrossed gay lovers. They were, we later learned, hot air balloonists, who had gone way too high up into the sky. They had been so determined to make a record that they had given little thought to safety, didn’t suck in enough oxygen from the little bags of gas they had brought along with them, passed out…and died. The balloon crashed to the ground and they were remembered as martyrs of science. Père Lachaise is a remarkable place, and that is why I am determined to end up there.

Tiger’s grave was not hard to get back to, and I remain proud of the spot I chose for his ashes. It’s intensely remote and very private and hardly anybody ever comes round.

Jessica and I took our macarons to the little spot, thought about the greatest cat that has ever lived, and ate our treats. Tiger would have appreciated it. The macarons were, of course, divine. I had a mint one that was particularly good, so I let Jessica sample. Reader, if you’ve read my travel blogs for any length of time, you surely know where this is going…

She took one small nibble, her eyes widened in shock, her face scrunched up in disgust, her arms began to flair, she gasped for air, she cried. I rolled my eyes and said, “Jesus Christ, just swallow it.” Bad advice, I learned. She mushed the macaron (she literally had an 1/8 of a teaspoon, reader, worth of divine cookie in her mouth) attempted to swallow it, and projectile vomited onto Tiger’s grave. I was speechless. I still am at this desecration. I’ll literally never be over it. This is worse than the time she projectile vomited on a bus in a seedy part of Los Angeles and had to hold a warm sack of her vomit for twenty minutes. How is this my life?

Deciding it was time to move on, I told Tiger goodbye, and we proceeded to the columbarium, the area of the cemetery dedicated to cremated remains. It is fabulous and has become one of my favorite parts to explore. I have come to the realization that this is where I will have to end up if I want to be buried in my favorite cemetery, and I’m quite all right with that. I would love to be on one of those huge walls of gorgeous stone reminders of life and death. Not downstairs in the subterranean columbarium, though, it weirds me out down there.

We discovered a delightful new game that we enjoyed tremendously. You probably had to be there to find it funny. You find an amusing grave, because reader some of them are hilarious, and you shout, “Picture it! Me (insert hyperbolic description of the image.)” It’s great good fun. The finest memorial was surely that to Laëtitia, the Queen of the columbarium. She smirks from behind a shadowy angel, rises from the grave, blossoms like a rose, and slays all the other bitches. She snatched all our weaves.

We did this for a good long time through the massive construction, and it was divine. We tried not to be too loud. It was glorious.

Try your hand at “PICTURE IT!” with this picture! Comment below!

After hanging out with the dead for a few hours, we headed for the Marais and discovered that we had just missed the gay pride parade. Never have Jessica and I been more upset. We only saw a few off duty drag queens, and though that was marvelous, as is any interaction with drag, it wasn’t the same as being surrounded by them and having condoms and lube rain down amongst rainbow confetti. It’s really a shame we missed it.

We ate our feelings at Berthillon, the best ice cream shop in town. Everybody knows it’s the best, and for once, this isn’t overrated. I had peach, which was perfect. Jessica had mandarin, which was also perfect.

Contentedly munching on sorbet and fresh sugar cones, we got to the rue Saint Paul and stopped by Miss Manon, my absolute favorite bakery in the city. I held my breath. I looked in the window. There she was. I nearly cried. I have adored the woman behind the counter since we first came across each other in 2011. Depending on the day, she is either the most charming woman in Paris, or she can’t be bothered. Today, she was wonderful. And I was endlessly happy. I could have floated back to Clichy with my Opèra cake and poppyseed baguette. In fact, I think I did.

One response to “PARIS: Picture It”

Took this picture eleven years ago in the courtyard of my apartment in #Paris after finishing classes for the day at @lecordonbleuparis. Missing it a lot today. #¯\_(ツ)_/¯ #CATS
Absolutely thriving today in my #Lagerfeld finery. #Karl #¯\_(ツ)_/¯ @karllagerfeld
The #BLESSING #of #BOTOX #¯\_(ツ)_/¯
The Prince and the Pauper. #EDWINA #MAILCAT #CATS!
“You’re perfect, you’re beautiful, you look like Linda Evangelista, you’re a model! Everything about you is perfect!” —me to Mail Cat sitting in my window. #¯\_(ツ)_/¯ #CATS
The squad. (Clockwise from top left: Trésita, Clarence, Cinco, Mail Cat) #¯\_(ツ)_/¯ #CATS