Of course today began too early for my liking, but who am I to stop the sun and moon?, so I fell out of bed…

Barely coherent, Ma launched me out of the apartment with a Metro pass and I was on my way to school. It was the morning rush on the Metro, so when I somehow managed to squeeze myself into the train, I realized I was nothing more than a sardine swimming in oil and mustard, or cayenne seasonings, it really depends on your sardine preference, but either way, it was jam packed with impatient French folk. I never could find a seat and my bag made for a very awkward trip. If I had only known then that this would be the comfortable trip…

I made it to the school with ten minutes to spare, and checked in. Upon receiving a folder of information, I was ushered into a waiting room to fill out some paperwork. It was then that I discovered that there are not many French people at Le Cordon Bleu. At least 3/4 of the students hail from somewhere on the Asian continent. The rest of the students tend to be from English speaking countries, but never the United Kingdom. I don’t know why. The staff is very multinational as well. While the chefs all seem to be French, the translators and staff all come from different places like Japan, Australia, Canada, the United States, Honduras, Peru, and a multitude of other places. Somehow, it was comforting to get away from the total Frenchiness of France. I love France and all, but sometimes it gets overwhelming and you long for a string of English.

We were presented with a PowerPoint presentation detailing all aspects of life at the Cordon Bleu and were introduced to a good majority of the staff. They all seem nice enough, and I hope that they stay nice enough.

Once the presentation was complete we were ushered out to Winter Garden, which is a type of dining area/lounge. There, I met some other students from America. One was from Connecticut and the other girl was from California. She said that yesterday was the first time she had ever experienced snow. I was immediately exceptionally jealous of her weather history, but got over it. They were both very nice.

We were all divided up into groups and were ushered around the school on a tour. The upper levels basically consist of various kitchens. They are all very industrial looking and modern. Not too much to say about them, just a lot of brushed stainless steel. The prep kitchens are located in the basement. Each week two students have to come early to class and grab all the necessary ingredients for the day and place them into the dumb waiter. It seems easy enough.

All of the chefs seemed very nice and willing to help which was a good sign, I think.

On the last leg of the tour, we descended the stairs and passed pictures of famous celebrity chefs and past students of well-renown. I was amused to see a picture of Giada di Laurentiis. There was a poster of Julia Child, whom I adore. And then, dead center of the most prestigious area of the wall, was a poster of Sabrina. If you read my previous post, you will understand my gut wrenching horror, so I won’t elaborate as I would have to relive the painful experience.

After our documents were checked out by the admissions staff, we were allowed to get our uniforms and kits. The kit is a massive black bag filled to the brim with lethal weaponry, it makes me feel like a bounty hunter. There are at least ten knives of various lengths, any of them could kill with an accidental slip. So, that was scary, and I am glad it has a lock on it.

I was then given three uniforms and had to go and try them on. They all fit fine, but there was no mirror in the locker room, so I don’t really know what I look like in them.

Once I chose a locker and claimed it as my own with my purple padlock, I was free to go. Carrying the heavy uniforms, knives, heavy duty shoes and all was no easy task. So, as I passed the gift shop, I put everything down to look around. I was still very interested in the plates, so I decided to buy the one that had no mention of Sabrina. A very kind woman got the plate for me and asked me all about my day and answered all of my questions. She was very friendly and that made me glad.

So with my multitude of knives, fragile ceramic plate, and duffel bag, I somehow managed to squeeze on the train which was now in lunch hour traffic–this means it was even busier. I don’t know how I managed to get into the train, but it was miserable. The French don’t really have a personal bubble concept, so when it is crowded, they are all over you. I always think of lice.

When I got home, Mother said we had to go out. I decided to go to Edith Piaf’s grave, but I should have known better, Ma wanted to get the Navigo pass first, which I suppose was a good idea, but I dreaded it. The Metro people are either really uncaring, or very nice, so I’m always scared.

I had my paper all filled out and my adorable photo affixed to the front, so we set out for the Bastille Metro, where we were informed there would be a place to purchase a Navigo Pass. Of course, when we descended we were informed that they didn’t sell them. She told me I had to go to Bonmarchais, which isn’t a real place, so that was convenient.

Ma said that we could go to any Tabac (tobacco shop) to get a pass, so we tried that, but the owner said that wasn’t true. So then, I decided to go someplace big, so we caught the Metro to Châtelet – Les Halles where I assumed there would be a place to purchase passes. This time, I was again informed that they didn’t sell passes, but the young gentleman behind the counter was much more willing to help. He told me where I needed to go, which wasn’t too far, and wrote it down for me in a little notebook I have.

With his clear instructions, we found the agency that sells the Passe Navigo. There was a deep line already, though. Paris is switching cards from something called the Carte Orange to the Passe Navigo. Everybody has to get one before the 20th of January, so it was very busy. In about an hour, we were finally in the office. After proving who I was at least four times, I was granted permission for the Navigo. They didn’t want the paper I had filled out or the photo we had slaved over. They just took a picture with a webcam. She didn’t tell me when to pose, so I’m looking ahead with my eyes to the side. It is tacky, but it works.

By that time, the cemetery where Edith was buried was close to closing so I decided to go to the Galeries Lafayette instead, and I am glad that I did. This majestic building is a shrine to good taste. At least eight levels filled with designer clothing, accessories, shoes, books, souvenirs, perfumes, gourmet food, and any other product for good living that you could want. 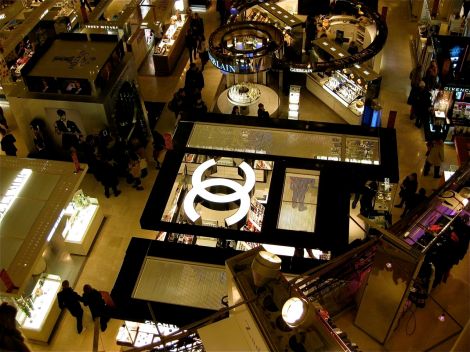 The domed ceiling is stunning, all stained glass, it looks like a church, a church to the Fashionista God, whomever she may be.

In the men’s section, I was delighted to see a section of clothing from Karl Lagerfeld. He is my favorite designer, so it was neat to see the clothes that he had created in person, not through the screen of my computer, watching a fashion show on YouTube.

French clothing for men is actually rather boring, aside from a few designers, it’s suit this and suit that. They are nice suits, don’t get me wrong, but there is nothing truly outstanding in the suit department. On the second floor, a complete half of it was dedicated to various types of underwear. Along with forks, plates, lucky Japanese cats, and chopsticks, I collect underwear. That may sound weird, and it is, but it is still fun. So the endless varieties of underwear were delightful. There was a pair that was silkscreened to look like a newspaper, others were in vibrant colors, and others yet were incredibly expensive. Since the Paris sales start tomorrow morning, I may well find myself with a pair of the newspaper undies, they are too unique to pass up.

We went up to the top to look at the Paris souvenirs and such, nothing that great. There are some interesting serving platters and plates with the Metro lines painted on them, but aside from that, nothing that impressive.

While Mother was appalled by the wedding dresses on the same level, I was enthralled. One of the dresses looked as if it had been put into a chic blender and then pulled out. It was magnificent. Shreds of the dress were tacked together into a spiderweb of fashion genius. (It would be painfully simple to replicate, too, so that made it all the more fun. Instead of two thousand euros, you could probably make it, with fifteen dollars, easily, in an afternoon. I think I may.)

At the cafeteria I had a cookie and Ma had another tart. It was a very good cookie, double chocolate.

We descended to the subterranean levels to leave. This section hosted the youth clothing and the books, CDs, and DVDs. They, like my beloved Virgin Megastore, didn’t have what I was looking for, so we left for home.

We had a late supper and I tried the lemonade that I purchased at the Shopi. In France, lemonade is sparkling water, so if you want an American-style lemonade you need to get a citron-pressé. This is basically squeezed lemon, water, and sugar. This tastes nothing like the sugar filled and preservative stuffed lemonade I am used to and love from A&E, so it is a shock. It tastes more homemade, and for the first time, that is a let down.