So like every morning that has ever passed by my eyes, I was too tired. I must have some kind of sleeping disease, but I’m not a hypochondriac, so I won’t elaborate.

Back to the subject of disease though. When there is no sunlight, I get very sleepy and depressed, so an overcast and snowy day did not a happy boy make.

Mother’s first goal of the day was to get my Navigo Pass. This is a credit card sized ticket that functions as a pass for all sorts of transport in Paris. You can take the Metro, the RER, the bus, and the tram which I just discovered existed. It’s nowhere near where I am, so I will never use it, but it’s nice to have the option in case I should choose to.

The first thing that we needed to get for the pass was a passport photo of my loverly self, so we had to go and find a photo machine. While that sounds like it would be easy, it was actually the most difficult thing I have ever experienced. They were supposedly inside of the Metro, but we didn’t find any until long after we had given up. (And then the dramatic irony of discovering one less than a half minute walk from my apartment at my neighborhood Shopi. I don’t wish to linger on that, though.)

In the time between giving up and finding a photo-booth, we decided that we should do a dry run to the school to see how long it would take to get there. Getting to the appropriate Metro stop was no problem–I have the Metro mastered. What always catches us up are lousy maps, which are really dreadful and have no basis in reality. This map said that when we exited the Metro we needed to be on some street that was just to the right, because the map said. We walked for a good half mile until we ran into the next Metro confirming we were far away from where we needed to be. That always gives you that sinking feeling you get when you realize that you just chopped off your big toe or have crashed into an iceberg.

So we turned around and walked back to where we had come from. Then, things suddenly became familiar, the pompous boulangerie across the street proclaiming their superior deliciousness and the Shopi next to the Metro where I purchased my adorable disposable wine glass that shattered and broke my heart last year. The map was ridiculously miscalculated, but now I knew exactly how to find the school…

I will take this moment to tell you all about the wonder that is Google Street View. This free service from the web searching giant has absolutely saved my life, two to three times. If I hadn’t used it, I would still be looking for my apartment. With this web based application, you can literally walk the streets that you are going to be walking physically later. It is amazing, earth shattering, and life altering. That being said, if I had remembered to Street View my way to Le Cordon Bleu, I would not have been frozen, angry, and sad.

At the school, you can window shop for various dishes, books, and school memorabilia. I was of course drawn in by the plates, because I collect them, but became rather annoyed after looking at the names of the soup bowl. It was called the “Sabrina” bowl. If you have seen the 1954 movie starring Audrey Hepburn, you’ll understand the reference. In Sabrina, Audrey played a young, house servant type thing who nobody noticed. She tried to commit suicide for some reason, then her father sent her to Paris to go to the “most famous cooking school in the world.” This is Le Cordon Bleu. At her version of the school, they spent a whole day cracking eggs into bowls. Somehow this mindless task made her alluring and stylish, so when she returned home, the son of the family she worked for finally noticed her and paid attention to her. Then the brother of Audrey’s crush falls for her and they end up on a ship while William Holden is doing a summersault on a table.

I have a great disdain for this film, so seeing that plate upset me–though the same thing wouldn’t happen to many others I’m sure.

Next we went to the BHV, a store I had heard of, but never thought of going to. I don’t know why I hadn’t gone earlier. This place is a masterpiece of a shrine of magnificence. You can buy everything here! The flatware department is like stepping past the pearly gates of shopping. I also collect forks (and take them from restaurants when I can) so this was particularly exciting to me. I bought an ultramodern spoon and fork. They are rectangular, but barely molded to allow them to function as a spoon and fork. 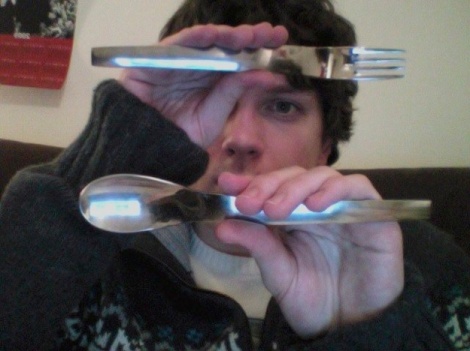 There were wonderful calendars and notebooks and toilet seat covers and towel racks and padlocks and barking dog stoppers and fifty dollar spoons and dish washers and popcorn makers and suitcases and soap dispensers——oh and the Dyson Air Blade Hand Dryer. The Dyson Air Blade Hand Dryer is the greatest invention ever. It is a dryer found in the bathroom, but you put your hands into it and then lift them out. When you hands are out, they are dry. It takes like ten seconds and has to be magical. I am ridiculously impressed with this newfangled drying technology.

When we got back to the apartment, we had a roasted chicken that Ma had made earlier in the morning. It was coated in frozen garlic from Picard so that was nice. There were potatoes too…