This morning when I went outside, it was very nice out, so I decided to take the doughnut that I had just bought at Tesco and eat it in the park. I was delighted to find a little shopping mall that I hadn’t noticed before on the way to the park. It’s kind of like a multi-leveled strip mall with all sorts of shops. I wasted some time poking in there before heading to the park.

When I had picked a bench, I sat down and watched this very ugly, but very friendly dog chase a ball, then a stick, then a plastic bag, and then a small child. It was delightful. I threw my trash away, and headed for the train. On the way there, you are assaulted by various newspapers who want you to take their paper for free. I don’t yet understand why, but I did learn all about Lady Gaga and Paris’ night in London and all about Madonna winning her custody battle. That is particularly big news here, since Guy Ritchie is somewhere around here.

When I emerged from the Westminster Underground Station, I was happy to see that it would only be five minutes until Big Ben would ring, so, I leaned against the bridge and listened to it reverberate around Parliament Square. It’s a very signature sound that bell has.

After that, I crossed the street and walked into Westminster Abbey. Halfway through, I realized that this is something you should only do once. The second time, it’s more than painfully dull, and ridiculously overpriced even before you get the headset. I mean, sure, it’s great to look at Queen Elizabeth I and King So and So, and the Coronation chair, but, it’s still pretty dull. The reason that I went was to see if I would have the same reaction to the Cathedral Museum. When I went there in 2007, my chest started to hurt very badly when I looked at the effigy of one of the Queens. I was both delighted and horrified to have the exact same feeling when I went back. It is a very piercing feeling right over my heart. She must have had me killed in a previous life. So, I left. There was nothing else to do. 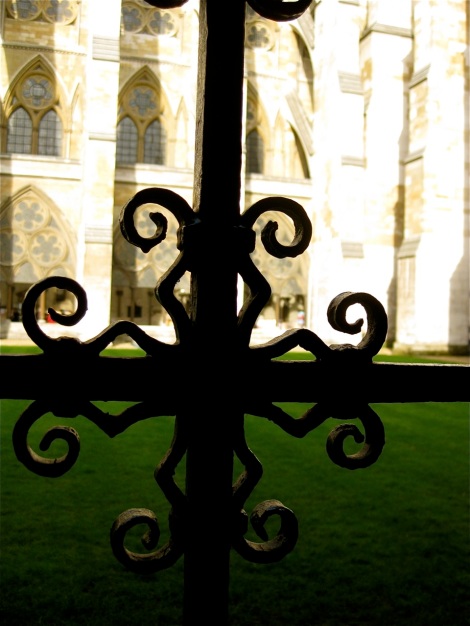 Buckingham Palace wasn’t far off, so, I decided to go and see if the Queen was in. She was, the flag was waving majestically from the top of the palace. It was lovely, and cold, and kind of dull, so I walked down a random street. What a world of heavenly delights I found. First off, the Buckingham Palace Gift Shop! Yeah! What says you’re sophisticated and wealthy better than glassware approved by the Queen? Nothing. I got myself a glass cup exactly like the one that I had purchased at Windsor Castle in 2007, I was very pleased with that since I was devastated when somebody shattered my last one. They also had the miniature crowns that would look perfect on Tiger’s perfect little head, but I will buy it in March, I am out of space for this trip. And, I put it all in an environmentally friendly shopping bag approved by Her Royal Majesty, Queen Elizabeth II of Windsor! It has a crown on it and is basically amazing.

There were even more wonders to be found on this street, a Cornish Pasty Shop! That was one of the things that I have wanted to have since I got here, but hadn’t been able to find any. They said there was a five pound minimum, but I had just spent all of my cash on the cup, so I couldn’t eat. Super…

Then, I went to the Apple Store to see if there was a line yet for Eddie Izzard. This morning, I had convinced myself that I didn’t want to go to it, because there were a lot of things that I could do. But, I decided to go anyway, I love Eddie Izzard, and I haven’t seen a celebrity since I got to Paris, even though I’ve been looking for Lady Gaga and Paris Hilton since I’ve been in London. They’re here somewhere. Anyway, there were a few people in line, so I ran off back to the hotel to get some food and warmer clothes.

In the Oxford Circus train station, there was a crowd and yelling, I just assumed there was a fight, so I left. Oh, the irony. Around midnight, when I got back to the hotel, I checked on perezhilton.com and found out that it was not due to a fight, no, Robert Pattinson was there, a ‘major’ celebrity, feet from me. Whatever.

Long before that, I began to meet the people. The first person I talked to spoke Hindi, which was very interesting to me. Then there were a couple from New Zealand. I don’t know why there were in England. There was a man from New York who was a songwriter. I don’t think he’d ever seen more than Eddie Izzard clips on YouTube from his level of ignorance. Then, there was a girl from Germany who works for O2, but before she came to England, she used to do voiceover work on television shows. She is Piglet from Winnie the Pooh in Germany and one of the kids on The Cosby Show. That was very interesting.

Finally at 9:50, they decided to let us in. It was painful for us all to walk, and move, as we had been frozen into human ice cubes by that time. It was horribly cold outside when the wind would blow. After standing out there, near death, the then had the audacity to refuse to give us passes! It was just a stupid lanyard. They had printed 600, there were about 200 people inside. I don’t know what the fuss was about. I kind of hate that Apple store.

We had all assumed that it would be a fairly intimate affair of about 80 people, but, no, it was in excess of 200. So it was standing room only, which means, you can’t see. A few of us moved over to the back and were excited to see that we could see. I said, see, a lot in that last sentence. See?

It was exciting to finally see Eddie and the other ‘celebrity’ interviewer. He’s moderately funny, but Eddie was very funny. He did a bit about the extinction of unicorns, which seemed likely, if the animals had existed. I can’t say whether they did or not.

It was very funny, and I was very tired, and then I left. On the train home, I realized that I had only eaten a doughnut all day, but was surprised to not feel hunger.

When I was getting ready for bed, I turned the TV on to find this bizarre and hilarious show. The lady who used to host The Weakest Link has this comedy show every Sunday night (even though it was a Friday, must have been a rerun). It was insane and highly offensive. I always thought she was funny, but good lord…