I woke up this morning in my couchbed, very uncomfortably sitting up with my glasses still on. “What was I doing here?” I wondered aloud to myself, suddenly realizing that I hadn’t seen Sylvia last night. Crap. I had been looking forward to that. For some reason, I either slept through my alarm, or it never went off. I think I’ll blame the computer instead of myself. I looked at the clock and jumped out of bed and into the shower when I saw that I only had 33 minutes to be on my way. I threw a few bites of Cheerios into my mouth and then hopped on the train. Why do they insist on having classes before 3:30pm, it’s inhuman.

I saw many of my classmates on the street outside of the Shopi bakery, so I said hello and talked to them for a while before hurrying to school to get changed. There were 8 1/2 x 11 printed pages all over the street, I didn’t pay attention to them, but I finally looked and felt very sad: 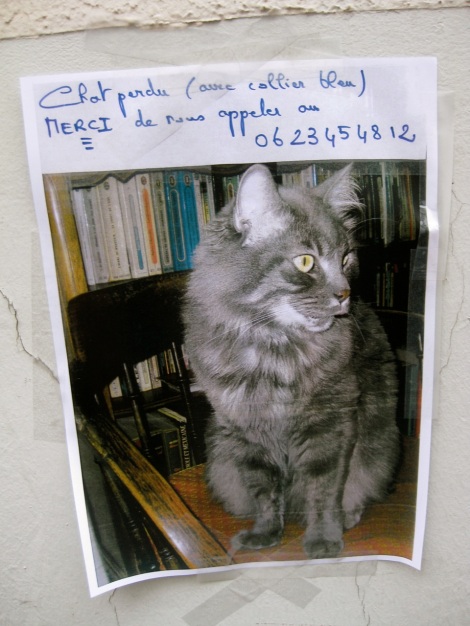 Poor cat…if Tiger or Clea or Shadow had ever run off, I wouldn’t have any more reason for living. Shadow used to run away and cause me way too much stress. Tiger has pranced out the door once or twice, which is always scary, but he knows he is too stupid to survive outside, so he always runs back to the front door.

I sat with Jongin and Jurelack in the Winter Garden and marveled at them memorizing recipes for the test next week. I procrastinate much too much to have started memorizing anything, and I can’t memorize to save my life. I have made some flash cards, but that is mainly because I enjoy cutting construction paper. Crap…now I have to pretend to be a good student and work at this stuff.

We had class on the first level for only the second time ever, thank God. I hate having class up there, the room is cramped and the chairs are tiny and unsteady, and the fans are incredibly loud. It just isn’t a good place to have a lesson. One of my classmates, Daniel, was surprised to hear me speaking in French. That made me laugh a lot for some reason, I still don’t know why. I guess it was the shocked expression he had on his face, or maybe I just wanted to laugh, I don’t know. 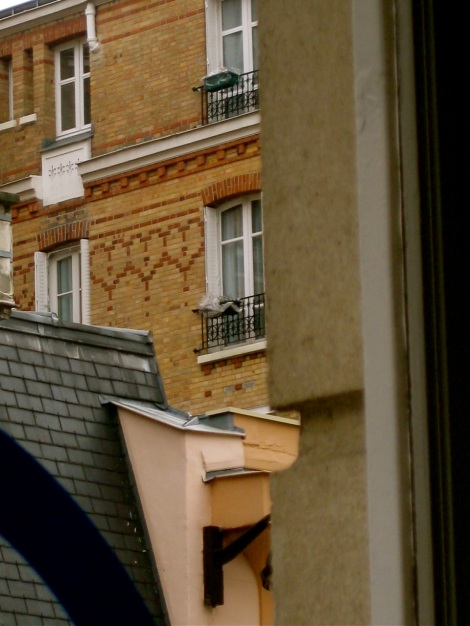 Sitting in the horrible chairs, waiting for the lesson to start, I stared out the window and daydreamed as I often do. I liked the wall of the building outside the window. You can see it above, it was interesting to see the heart made out of bricks that were probably laid in the 1800s, if not earlier. I sat with Nancy and we chatted about how we don’t really study and how memorizing random recipes wasn’t too good of a way to judge students culinary prowess. Somehow we got talking about stupid knowledge that we don’t need to know. She asked me what the capital of Canada was. I sat there stumped, feeling like a complete retard. I really don’t know, nor do I think I was ever taught. I said, with caution, “Toronto.” Nope. “It’s not Montreal or Calgary?” Nope…it’s Ottawa.  I don’t think I’ve ever been told that, or maybe I’m just more retarded than I’m willing to admit.

The Australian translator was running late, so Kaye from the front counter came up to translate for us. I have always liked her, she was the first person to take an interest in me at the school and make me feel welcome, so, I will always be grateful to her. She always says hello when she sees me, which is nice, the rest of the staff…don’t too much care for them. It’s not that they are rude, not in the least, but they are very disinterested in helping.

The Australian translator came back, I can’t remember her name which is driving me crazy, something with an L, anyway she was very excited to give us chocolate samples from the supplies used to make today’s cake…some kind of raspberry chocolate thing. It looks very pretty. I was pretty enthusiastic about trying the chocolate…very, very good chocolate, by the way. 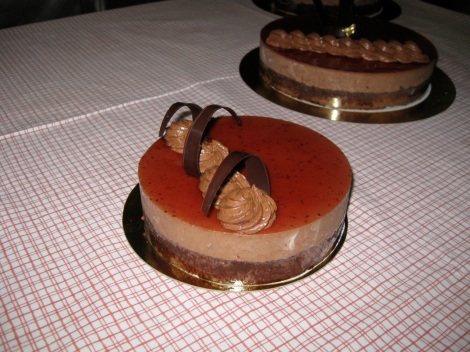 It seems that every cake needs to be soaked in a sugar syrup, which is something we thankfully don’t do back home. Why can’t a cake just be a cake, why must it be a sponge? And why…does every cake need to be frozen? I take no joy in eating a cold soggy cake, I don’t think you would either. It had gold leaf on top, but my sample didn’t have a piece, so I still have no idea what gold foil is or how it tastes.

Chef went on to temper chocolate for us. This was something that I had heard of, but never knew what it was. Basically you are changing the temperature of chocolate so that it dries faster and looks shiner, but it tastes the same. I suppose that I fail to see the point. Why is shiny chocolate better than less shiny chocolate? It’s just going through your intestines either way.

In the end it was a very pretty cake, but to me, texturally offensive with it’s soggy crumb and raspberry jam and frozen mousse.

I went home and then took a shortcut to Monop’. It’s only a five minute walk with the shortcut compared to ten the way I had been doing it. It is magically close to the apartment and I don’t understand how that is. I’m fairly positive that there is a tear in the time/space continuum on Rue Sedaine. 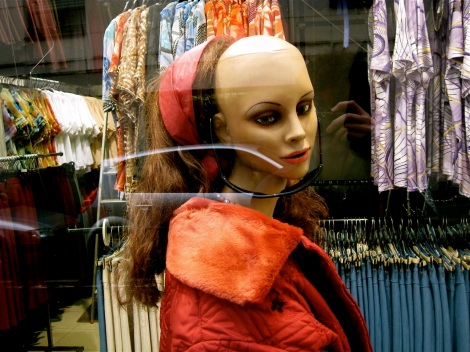 I was happy to see that the webcast with Sylvia Browne that I had missed was posted for streaming. I watched excitedly, waiting for my face to pop up onto the screen. I spent two hours working on different words and delivery, on facial patterns and on my laugh and smile. In the end, I looked adorable. I don’t know why I wasn’t chosen.

Then I watched Craig Ferguson, the person who posts the videos is finally starting to catch up, they’ve been slacking off for a week and greatly irritating me.

For the rest of the evening, I sang along to the Pocahontas soundtrack. I forgot how delightful it was to sing about savages and river bends and talking trees and the new corn moon, what ever that is. That phrase has been bothering me since the movie came out in 1995.

Then I watched a bunch of Daria episodes because I couldn’t fall asleep. That show is amazing.