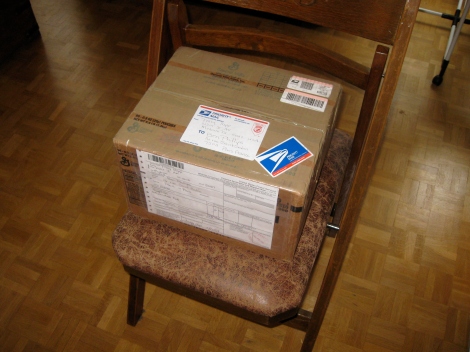 When I woke up this morning, at one o’clock in the afternoon, I was facing the opposite side of the bed for some reason. I must have decided, in the middle of the night, that the normal sleeping position wasn’t good enough for me and changed.

I hadn’t wanted to sleep in so late, and I don’t really know why I did, but I went on with the day as best I could. I went downstairs to take out the trash and check to see if I had any mail. In my letterbox was a slip telling me that I had a package, delighted, I danced over to the guardian’s office and picked up the box you see above.

Back in the apartment, I happily ripped the box open and looked over all its contents. A massive bag of chocolate chips! A gigantic bag of brown sugar (I don’t know why they don’t have this here)! And more, everything I could possibly need to make myself some cookies. I intended to get started right away, but realized that I didn’t have enough butter or flour, so, I instead took myself to Shopi.

I went in and got the things I needed, along with a chicken breast, because I always need that, and then, I found, with a gasp, potatoes. They were sitting nonchalantly in a place they had never been before. Bags upon bags of potatoes. Both infuriated and delighted I grabbed one and hurried to the counter, so excited to make cookies, was I.

Back in the apartment, I measured out all the ingredients, and then the butter. This posed a problem, though, aside from the obvious metric fiasco, it was solid as a rock. I’ve never felt such hard butter. I knew that it wouldn’t be softening anytime soon, so I cut it up into small cubes, put it in a glass bowl, and set it under my lamp, hoping that whatever heat the lightbulb put off was enough to soften the butter. It did, but it took over an hour. 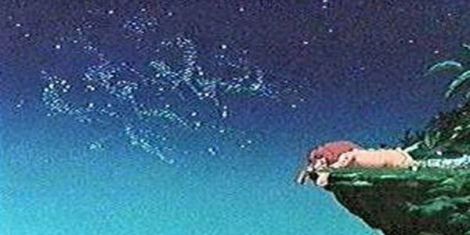 I discovered that Eartha Kitt (I love her!) voiced Ezme on The Emperor’s New Groove, unarguably Disney Studios greatest masterpiece.

I also learned about something called “Paris Syndrome”:

Japanese tourists sometimes feel so let down by Paris that they need treatment for a type of depression known as “Paris Syndrome”. The following two paragraphs come from the Japanese Embassy–a place I have been meaning to visit since I got here.

“There are around 20 cases a year of the syndrome and it has been happening for several years,” Miyupi Kusama, an administrator at the Japanese embassy in Paris, told the Guardian. Already this year it has repatriated at least four visitors suffering from hallucinations. “Fragile travelers can lose their bearings. When the idea they have of the country meets the reality of what they discover it can provoke a crisis,” Hervé Benhamou, a psychologist, told Le Journal du Dimanche.

Bernard Delage of Jeunes Japon, an association that helps Japanese families settle in France, said: “In Japanese shops, the customer is king, whereas here assistants hardly look at them … People using public transport all look stern, and handbag snatchers increase the ill-feeling.”

All this talk of Japan made me long for Mitsukosi’s at the Japan Pavilon in EPCOT–truly heaven on Earth. What they say about the customer being king is true, they are all so friendly there. Even the Japanese students, when they are assistants serving samples at school, are always smiling and making sure that you have everything that you need. Japanese people are great. I’ve never met one I disliked. I should go to Japan, too bad it’s more expensive than here with a language twenty times harder. I’ve tried to learn it, but it was impossible, and I don’t give up easily.

After who knows how long I was finished reading about a myriad of nonsense on Wikipedia, and the butter was soft so I could make my cookies. They turned out heavenly, like real cookies, unlike last time, using Parisian ingredients, when they had been more biscuit like. I ate five of them, immediately voiding all of the weight I had lost walking everywhere and not eating regularly. Oh well, cookies are more fun that being attractive…and it will take a lot of cookies to make me not look attractive, honestly.

I did some reading and flash card making the rest of the night, then after watching Daria (one of the greatest shows on Earth), I went to sleep.