Today was graduation day, so I had to wake myself up to get there. Why in the world would anybody want to graduate at ten o’clock in the morning? I know I didn’t. But, I woke myself up and stumbled out of bed and into some moderately dressy clothes. My hair was an utter disaster, so, I just left it as it was, opting to grab my stocking cap in an attempt to flatten it down.

The subways were going at a painful two miles an hour again, I’m not sure what their deal is lately, aside from the impending strike. On the last train, I ran into classmates who told me more about the strike that was going to happen on the 19th. Crap, I thought to myself, that’s the day everybody gets here. How are they supposed to get from the airport to my apartment?

Soon, we were at school, we had to get our names checked off of a list like the VIPs we truly are and then sat down in the Winter Garden in assigned seats. Jongin was already there, but about half of my class had not shown up for some reason, which I found strange.

The ceremony started and we learned all about the history of the school and then all about the chefs. I learned that the name of the Chef that I like who doesn’t work at the school is named Daniel and he used to have his own bakery. This talk went on forever, and finally, they got around to telling us how we had all done on the exam. Chef Cotte said that all of the Pithiviers were perfection, which pleased me to no end, seeing as he had critiques for the other two dishes I hadn’t prepared.

After the review, we were presented with our diplomas. It was quite elaborate. They said your full name where you were from and then clapped, then you had to shake the hands of all the chefs, take your certificate, get your picture taken, proceed to the other end of the room where you signed your name for some reason, then were presented with grade sheets. As I sat down, I looked at the grade sheet, I had done better than the class average, so, I was happy.

The ceremony finally finished and we were all led to the demonstration room where the chefs had prepared a cocktail party for us! There were macarons and hundreds of other kinds of little pastries. There was this raspberry thing that, when you put it in your mouth, it kind of exploded like Pop Rocks. Champagne after bottle of champagne — they really like their bubbly. Then, my favorite dish was a giant crock-pot thing layered with beef, pork, carrots, potatoes, onions, some kind of cheese, and all soaking in chicken stock. It was very good. 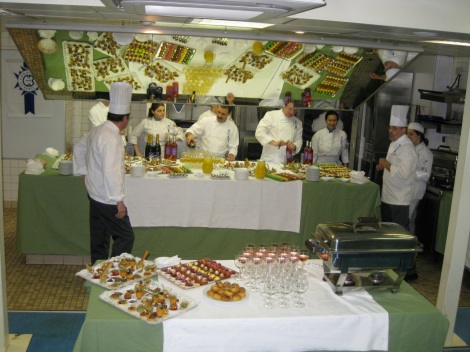 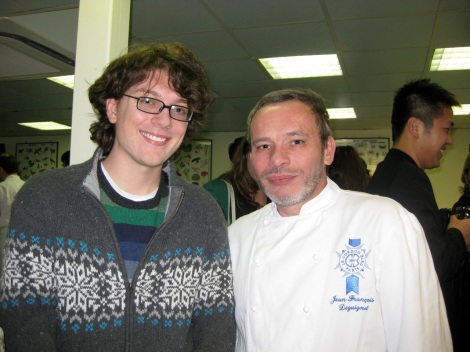 Everybody wanted to take pictures of me and I with them. We talked with the Chefs and thanked them for teaching us. Then it was time to go. We all walked to the Metro and said goodbye and I rode home, looking forward to a nice nap before I straightened up my apartment.

My nice nap turned into a six-hour ordeal that ruined all of my shopping plans for the day. When I woke up at ten o’clock, everything was closed. So, instead, I straightened up the apartment until three o’clock in the morning, watched my family’s plane’s progress on the web, and then, went to bed.