Sometimes, there are events in your life that are just too good to be true, but then they are true, and they are even better than you could have ever imagined. Situations like this don’t come around very often, but on April 3, 2009 in Minneapolis, my life was just like this — I went to the Britney Spears concert.

Laugh at me if you want, but I love that girl. I’ll admit that her vocal range isn’t excessive and her material isn’t always original or creative, but it never fails to make me fall in love with it all over again. I first started listening to Britney after she went crazy last January. If you need a recap, she shaved her head, got crazy tattoos, held her children hostage, beat a car with an umbrella, went to the psychiatric ward, and performed miserably at the MTV Music Video Awards. I love a trainwreck, so I was happily following her life story as exaggerated by the media, and dreading the announcement of her death.

Thankfully, she didn’t die, and she made a comeback, of which I’m almost personally proud. I thought she had the perfect album in Blackout, but sales were admittedly dismal. Circus is excellent as well with outstanding songs like “Unusual You,” “Circus,” and “Kill the Lights.” But, Blackout will always hold a special place in my heart not only for its fabulous tracks such as “Freakshow,” “Toy Soldier,” and “Heaven on Earth,” but for it’s absolutely atrocious cover and that wonderful picture of her seducing a priest in a confessional booth. God, that always brings a smile to my face!

Anyway, one day when I was in Branson with Granny and Grandpa, her Circus tour was announced. I slowly looked at it, knowing that the closest concert would be in Chicago, nothing ever comes to the Midwest, but to my delight, she was coming to Minneapolis! I immediately called Ma who said that we could go, so, I impatiently started waiting.

Of course, I had to go to Europe and graduate from culinary school first, but soon, it was time to pack up the car and jam with Brit-Brit.

Ma, Midget, and Auntie dropped Jess and I off in front of the Target Center with all the fashionable freaks and the freaks of fashion. We waded our way through the weirdos and ten-year olds to the front of the line. Jessica wasn’t good at cutting through the crowds, but I seem to have an innate ability to flow through people like a raindrop flows through a river…if indeed a raindrop remains an individual entity or just surrenders itself to the common particles around itself. Enough of my philosophical blabbering…

We found our seats rather easily, and they were great. We were in a balcony, but since the concert was in the round, any seat in the place would have been fantastic. We sat behind very excited and mock-drunken girls. To the left were two women in their late 20s who were acting if they were too cool to be there. To the right, my side, was a group of friends. I sat next to a guy who seemed very uncomfortable to be there, I assumed he had been forced to go by his friends, only later did I learn the truth.

Then…dancing hookers appeared on stage! Yes! It was the Pussycat Dolls! I hadn’t been too terribly excited for their performance, but damn–those girls can put on a show! The lead singer was clad in this hideously chic kilt and sequined vest that would have looked ridiculous off of the stage, but somehow made sense up there. The other girls looked wonderful as well, but what’s-her-name really pulled off the fierce.

They sang all of their hits, several of which I didn’t know they sang! One of the girls could lift her leg completely over her head and straight up, as if she were doing the splits in the air. Jessica and I were both in awe of this dancer/hooker. Their show was epic and amazing with synchronized jumping and synchronized dancing on the stripper poles (each of their girls had their own!)

The show ended as the lead lifted her pinkie high into the air with a screeching warble on “When I Grow Up” song which everybody loves to hate, but really loves.

There was silence for a few minutes, and then the Freakshow began. There were ribbon spinners, strong men juggling spinning cubes of metal, Asians flying through the air, breakdancing midgets. It was the greatest circus I had ever been to. I didn’t have to feel guilty for supporting animal abuse like the other circus’. I can’t go to them, I feel so horribly for the elephants and tigers and lions and bears and even the carnies. No animal should have to travel in a cage and have a whip thrust in its face everyday. Lions should be roaming the plains in Africa, or in a large reserve, or even in a decent zoo — never in a circus.

The Freakshow came to an end and then I heard the voice of the man with whom I have quite a love/hate relationship: Perez Hilton. I love his website so much it’s almost criminal, I’m on it all the time everyday. When my Internet is not functioning, I have Perez withdrawals, but when he opens his mouth…I just want to hit, and I don’t know why. He’s never personally offended me, well, the Michael Jackson comment was a bit insensitive, but other than that, I find what he writes rather amusing.

Anyway, there is a video of him dressed as Queen Elizabeth I for some reason that opens the show. It was interesting in an eccentric sort of way, but nobody was paying much attention, we were all screaming our heads off. We knew SHE was coming!

Then, descending from the heavens like an angel supported by the power of the Lord, Britney, our Queen of Pop, came down and burst into an awesome reinterpretation of “Circus.” Nobody heard a word of the song, we were just screaming and screaming and screaming and watching the flames and steam bursts and insane lights and acrobatics. Jessica had tears in her eyes. I was a bit in shock too…she is one of my favorite celebrities and to finally be so close to her was a bit…suffocating. 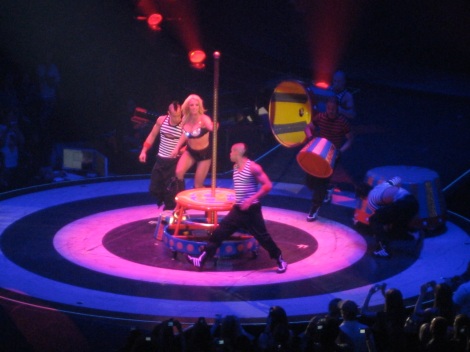 In some of the songs that followed, the circular screen above the stage displayed the song in Kinetic Writing. For those of you who aren’t in the know, kinetic writing is a special effect technique of animating words in time with the music or dialogue, giving it life. It is very simple looking, but terribly tricky to accomplish — with devastatingly awesome results if done well. There is an example of this in the video of the concert, which I’ll post below.

One of my favorite songs of the concert was a Bollywood version of “Me Against the Music.” It was exquisite, in full Bollywood costume, Britney and her backup dancers pranced around the stage in a tightly choreographed dance that looked effortless, which is what a good dance should look like. I was impressed. I was also enthralled by the circular screen again. This time it showed a single person’s hands doing incredibly elaborate movements that were beautiful and eery at the same time.

Then, Britney flew away on an Umbrella singing a lovely ballad, and it was time for an intermission.

During the intermission, there was a very bizarre version of “Looking For Something” shown on screen that was cool in a creepy way, which everybody loves. Maybe not everybody, but I think things are very interesting when they are macabre. Kind of like that Macy’s window in New York about Killer Fashion. All of the mannequins looked as if they had been shot and there was blood splattered on the walls and windows. It was beautiful in an eery way. Or like that time on America’s Next Top Model when the models had to pose as if they had been murdered. Some of my favorite pictures come from that shoot. Anyway, the video reminded me of that — only there wasn’t any blood, it was like an underground sex club, actually, now that I think of it.

Then, over the loudspeakers she spoke three famous and insanity causing words, “It’s Britney, bitch.” Everybody lost their minds screaming and crying. It’s her catchphrase now, and I love it. Oh, how I love it! 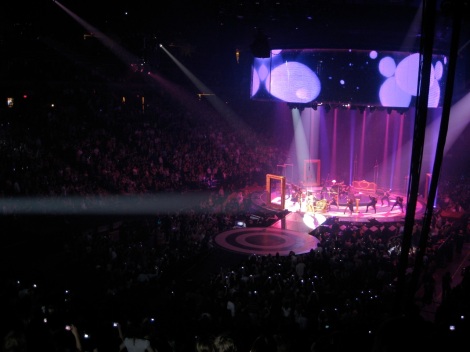 The second half of the show started with the show stopper, my favorite performance of the evening: a medley of “Get Naked” and “Freakshow.” The stage was now designed like a creepy mansion with antique furniture and giant frames and masquerade masks. It was absolutely fabulous. The dancing was perfect, the mood was perfect, it was my favorite part of the whole show, so elaborate and perfect. It was overwhelmingly good. I forgot to video it, I was so engrossed in the show.

Then, my favorite non-Britney related moment occurred. I was looking around the audience as the strains of “Toxic” started up, and that uncomfortable gentleman next to me lost his mind. He jumped up and down, somehow managed to spin around, clapped, threw his hands in the air, all the while screaming. He even did the “Toxic” dance along with Britney. It was very entertaining, and I was jealous of his moves. He was good. After “Toxic,” he seemed to have a much better time.

The penultimate song was a techno version of “…One More Time.” The whole audience was singing along with the lyrics that everybody knew. You couldn’t even hear Britney anymore. It was a very cool sensation to listen to everybody sing in unison at a silly song that didn’t mean anything, throwing away all their cares and worries and just living in that moment.

We all thought it was over after that, but then she was back in a police woman outfit to perform “Womanizer.” I’m not crazy about the song, but the special effects were great, it ended in an insane shower of sparks, and then she danced off.

I was sad that she was gone, but I didn’t have to worry too much. Little did I know that one day I would see she was touring again. She’s coming to Des Moines! And I’m going again…with even better seats. I could wet myself with joy! In fact, I’m wetting myself now, just waiting for September the 11th to arrive!