This will make sense later on.

I can’t say that I really felt any better the next day. This was a constant problem of mine in Turin, but after feeling like such shit the day before, I determined that I was not going to let my misery get the best of me. What’s the point of being sad, anyway? I would become one of those annoying people who post pictures on Facebook saying, “I have Multiple Sclerosis; Multiple Sclerosis doesn’t have me.” I can’t let that happen to me.

Thinking back on life, though, I get the sense that it’s important to wallow in self pity every once in a great while. Not every day, of course, because then there’s no point in living at all, but perhaps it’s important to have days like that one to remember how well off you are the rest of the time. Maybe? Or maybe that’s just some kind of excuse. ¯\_(ツ)_/¯

I was unmotivated to do much of anything, which I found disgraceful. So I cheered myself up a bit by watching Michelle Obama’s speech at the DNC. It was magnificent and beautiful. I hope she runs for president. I already miss President Obama. As a nation, I don’t think we fully realize how lucky we are to have him as our leader. The things he has been able to do with the atmosphere in Washington DC is remarkable. Just think of how far we have come socially since 2008, I still can hardly believe it. Anyway, that speech cheered me up a bit, so did the ravioli I was devouring, and then I read through my quotes on Facebook. I forgot that was a thing.

When I first joined the social network, it was so different from what it is now. To be honest, I don’t use it nearly as much as I used to. There’s no point for me these days. In the past, people would share their thoughts and ideas and pictures of their lives. This does not happen so much anymore. Now people mainly share casserole recipes and news stories that have no basis in fact. It is tiresome…tiresome…to scroll through junk in the hopes of keeping up with my friends and acquaintances. Anyway, I forgot that the profiles used to have bunches of personal information: from the books you read, the bands you enjoyed, and the quotes that spoke to you. I chuckled heartily over a few, nodded sagely at others, and wondered about who I used to be. Being nineteen was a long time ago. Here are few that cheered me up:

And it was really that last quote that propelled me back to the streets of Turin. Loyal readers will know what a massive impact Joan Rivers made on me. I think of her all the time. Her life and love for it has inspired me in ways I’m not even aware of. To this day, to this moment, I still have this fantasy of her being my grandmother, some fabulous creature that would have understood me from my infancy. I don’t feel quite right back at home because I have never felt like an Iowan. I don’t feel like a Mr. Phillips. I don’t know what it is that I feel like. I just know it when I do feel right. I feel right in Paris because I am the Parisian version of myself. I feel marvelous in LA because I am the Hollywood version of myself. Though those incarnations are fleeting and have less experience at life, they feel so much more authentic. I’ll stop philosophizing. 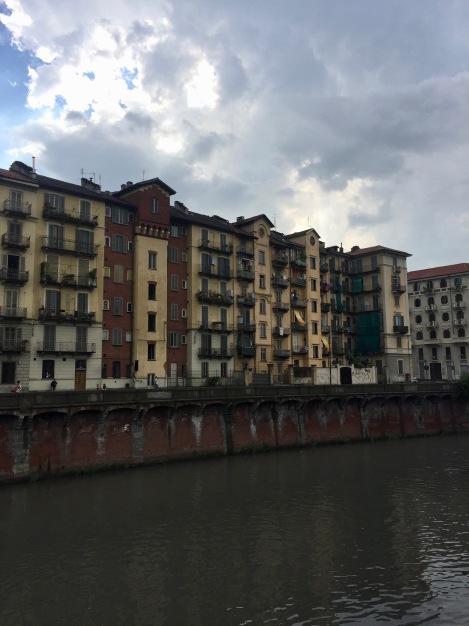 I found an automat and guzzled a few shots of espresso before crossing town to the cemetery that had been closed to me the day before. Wonderfully, this time it was open, and I passed through the gates into the overgrown graveyard. 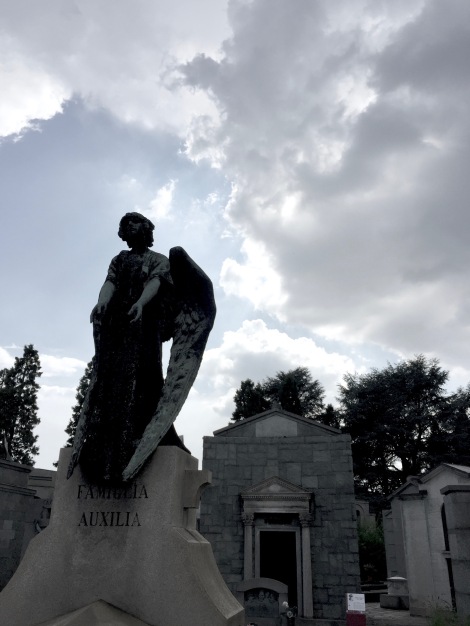 Above me, the sky filled dramatically with heavy clouds, thunder rumbled ominously in the distance, and it was perfectly atmospheric. There is no better way to wander through a cemetery, after all, than completely alone with the menacing threat of lightning and rain.

The graves and sepulchers were an intriguing mixture of modern and historic. The newer ones were very strange to me with glass doors and abstract architecture. They looked more like the entrance to an art gallery than a crypt.

The older tombs were very similar to ones in Père Lachaise, but on a grander scale. Apparently, the price per square foot is a bit more reasonable here, so plots are allowed to spread and grow in a way that would be impossible in my future burial ground.

Inevitably the threatening rain gave way to real rain and massive droplets began to fall, slowly at first, but soon it was a downpour and I took refuge in the columbarium. That’s the best word I’ve learned all year. I was astonished by the design of this cemetery feature. It was an impossibly long arcade that went on for ages. I never did see all of it. Either side was filled with statuary and gorgeous mosaics. The names were impressive, but the rain was more so. It was an ocean in the sky falling to Earth. There was more water than air. 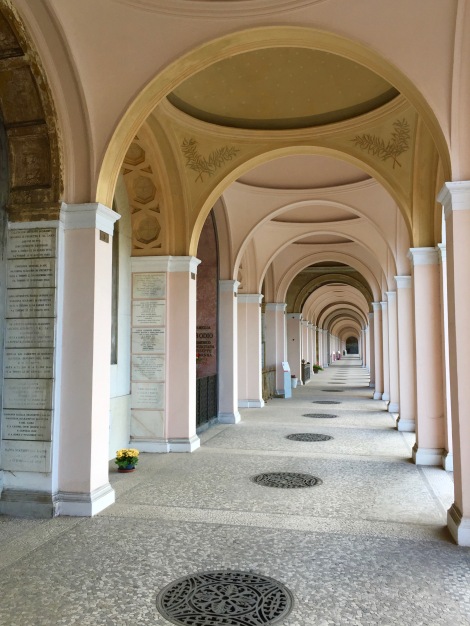 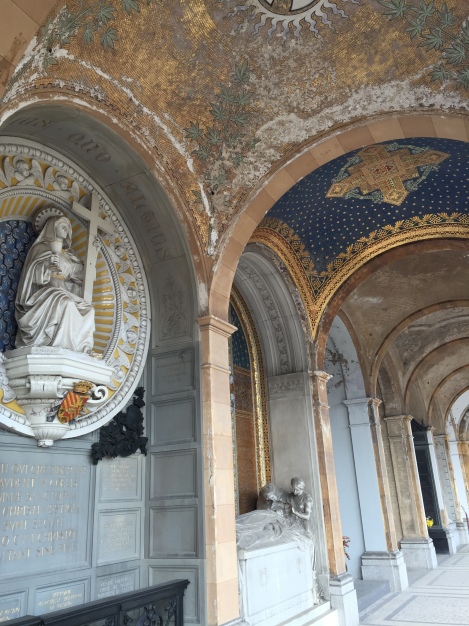 After a while, I began to grow concerned. I had no umbrella, I was thirty minutes from my apartment, and the downpour was intensifying. Knowing that I had nothing but time, I endeavored to enjoy it and walked along the columbarium. I had a very important photo shoot and rekindled my love for my iPhone’s self timer.

I daydreamed about the interred remains and who they were in life. I thought up stories and ideas for future books and novellas and shows and whatever else bursts forth from my imagination. I need seeds of inspiration like this to grow and develop and ferment into good ideas. I think that’s how the book I’m editing right now happened. I felt like it just jumped right onto the paper without me doing a thing. Effortless. I hope it’s as good to others as it is to me. There’s one brewing now. There’s a Broadway musical, Weimar Republic Berlin, and murder. I’m still not sure how that’ll come together, but I have no doubt that it will. 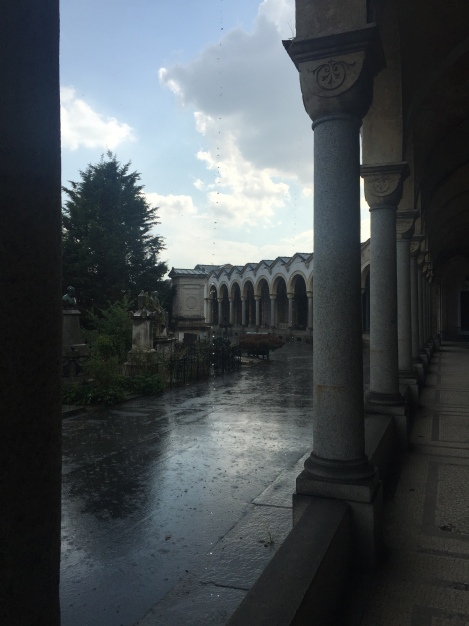 Finally the rain diminished and became nothing more than a drizzle, so I made my way back for focaccia and ravioli and a hot shower.

I watched Botched all night. It was a good day, after all. I mean, this show is fabulous! I’m obsessed with Frenchy. I want to be her best friend. She’s unintentionally hilarious.