I walked off about 15 pounds and had to be creative with my wardrobe due to the heat. I love that belt…I wonder where I put it?:

Jessica and I sang and posed in the Louvre. People LOVE us: 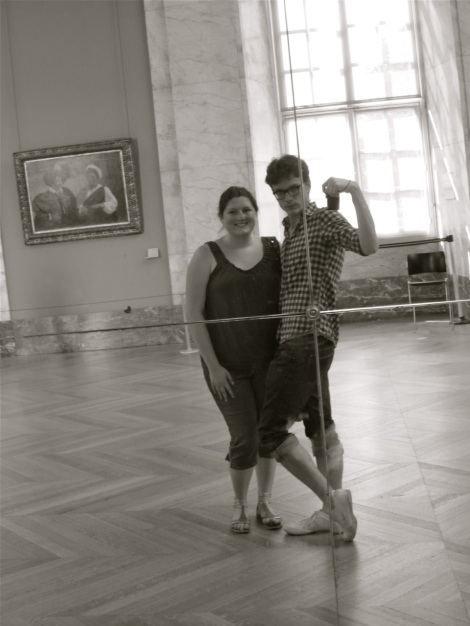 I ate an awful lot of nibbles, this is just one afternoon: 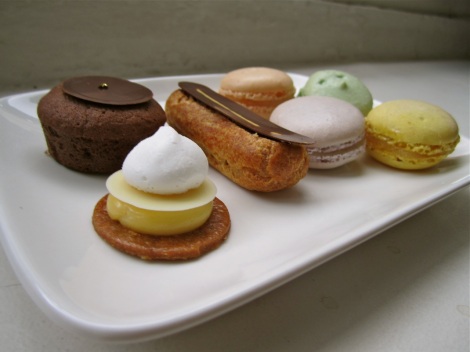 I discovered my love of lemon meringue tarts:

Then, unwillingly, I went home.

June was a very pleasant month for a variety of reasons. It was nice to come back to the yard all verdant and alive and I spent a lot of time outside working in the garden, making plans for a deck, and tanning.

Also, and I’m not going to tell you much about this because I’m not that kind of fellow…wait for my autobiography, but I fell in love. I never thought it would happen, kind of decided I was immune to it, but it was just like all those movies and books and it was wonderful. I don’t recall a time in my life that I had been so completely happy. In December, as I write, it’s not the same, but I wouldn’t trade those memories for anything.

In July, the weeds were growing rampant and I was sick to death of them around the house, so I dug and dug and hammered and nailed until I had created a tiny boardwalk. It’s not a boardwalk, it’s a little deck, but I’m bound and determined to live by the sea, so that’s what I call it:

The Fourth was a lovely holiday. I had papusas for the first time and looked adorable:

The family and I went to Minneapolis to see a Katy Perry concert. I was more excited for the opening act, Marina and the Diamonds. But the bitch, Katy, got food poisoning and canceled, so we just amused ourselves in the city: 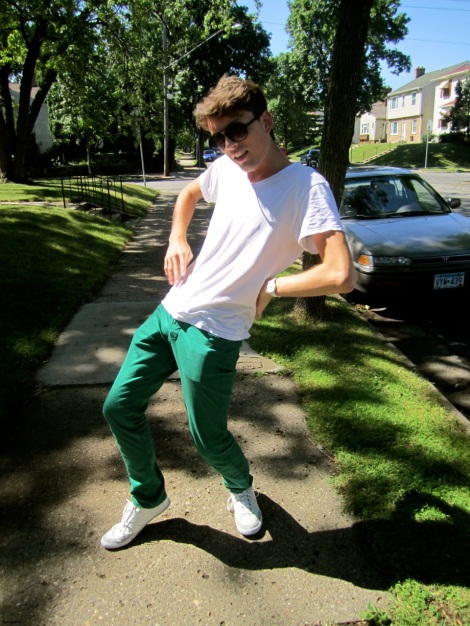 I also looked adorable on Bastille Day, but for some reason my picture is corrupted, so I can’t share. Imagine this: stubble, peasant cap, striped tank top, cigarette, square glasses, an aloof expression. Sad that I can’t show you.

Towards the end of the month, I was shocked at the price of a pair of trendy shorts at J. Crew, so I determined to make my own. I made them out of a tablecloth. They are Scarlett O’Hara chic. I wear them with pride: 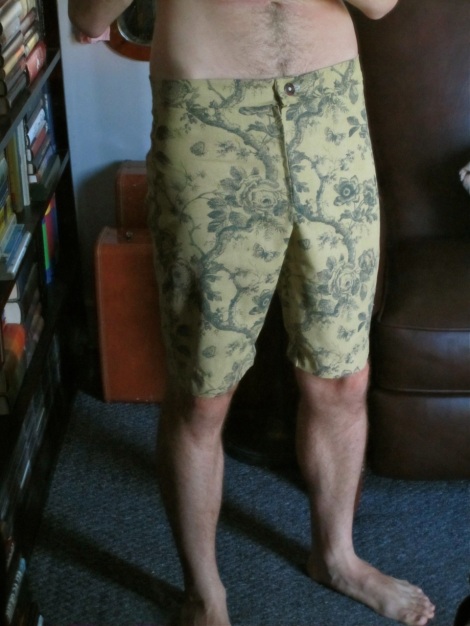 August of 2011 was one of the happiest times I have ever known in my life. I had everything I wanted, everything I had never known I wanted. I had romance, I had looks, and I had a job. I accepted a position at the Middle School that turned out to be rather decent and I’m still there. Never thought I’d like the little brats, but I feel almost paternal towards a few of them.

My parents and I are travelers. Jessica is not. So the three of us sans Jessica went to Dubuque and Galena to celebrate my birthday and their anniversary. See…they were married the day before I was born. Such a scandal! 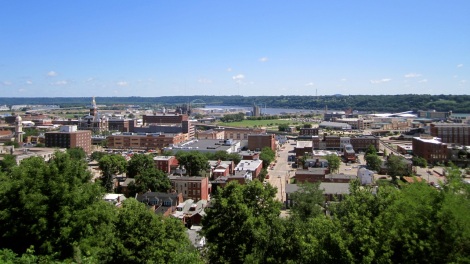 My love of brick homes was completely settled here. When I move away, I refuse to live in anything other than a brick home built in the 1800s. (More on that tragedy in October. Get more champagne and some tissues. You’ll need them.) My grandfather used to live here:

I saw the most stunning architecture everywhere I looked. This post office for example: 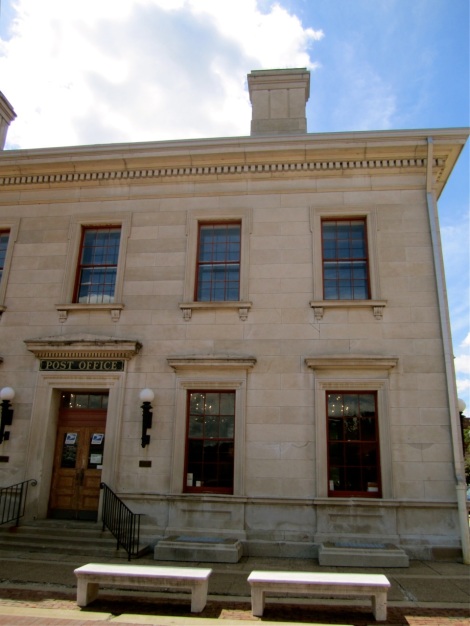 I learned about the style called Egyptian Revival, which I can’t get enough of:

I climbed stairs that President Grant used to go up and down twice a day. Simple:

A perfectly timed text message made my birthday rather perfect:

I decided definitely to take a raft down the Mississippi before I die. Think of the publicity, blog, book, television appearances, and movie deal!:

I saw a park inspired by Frank Lloyd Wright, that in turn, inspired me. I adore that man’s work:

Aside from all the other good things happening, I looked great every moment:

When we got back from the East, it was time for the Iowa State Fair. I go with Ma and Granny every year, and never really know why. Breelyn tagged along with us, which was a nice change. The only reason I go is to get a new phone. I got a lovely phone this year, it’s no iPhone, but it’s better than the crap I usually have. 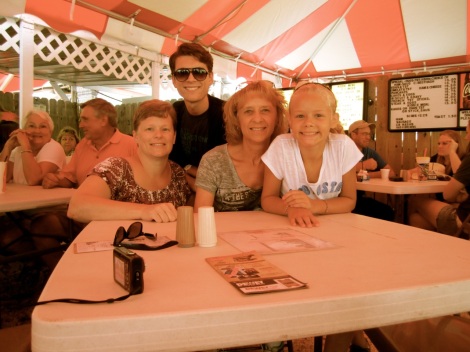 We went to the cat show and I about died. They’re all so damn cute: 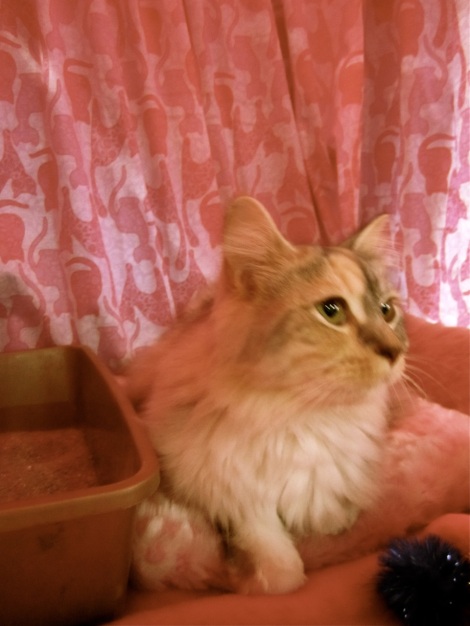 The Fair wasn’t so bad this year because it’s Caucus season. All the candidates were here. I saw Fred Karger and Michelle Bachmann and Sarah Palin. The Bachmann thing was interesting. I made friends with a German reporter and I was elbowed by that bitch of a politician, Michelle. I really hate her and everything she stands for. She is a complete representation of everything wrong with the world these days. 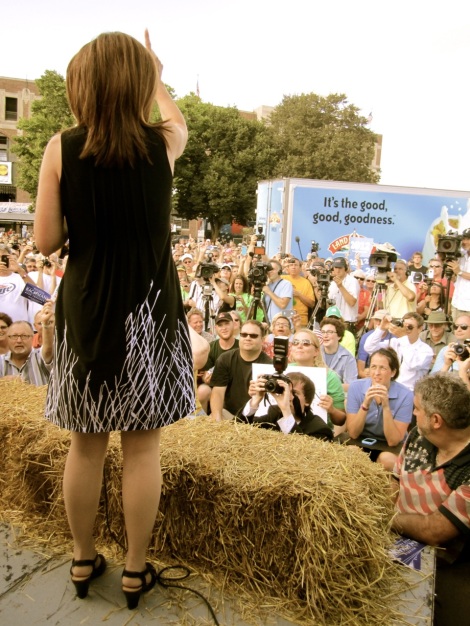 Later, we bumped into Sarah Palin. It was strange to actually see her. I wrote a blog about this in August. Give it a read.

On the last day of the Fair, Ma and I went to listen to Janet Jackson from outside of the stadium, but in a remarkable chain of events, we were given free tickets which were upgraded to prime seats. It was a really great concert and Janet and the dancers were such fun to watch. I’ve always wanted to be a dancer, but my body finds it too complex. 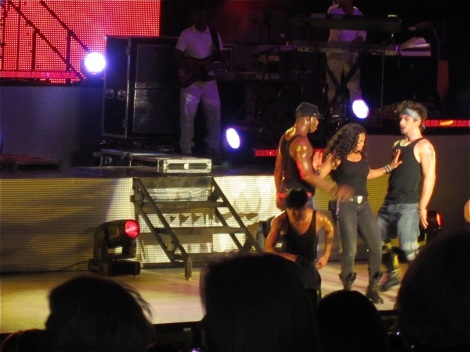 If only the year could have ended here, we wouldn’t have to delve into sad stories, but the rest of the year kind of sucked, so prepare yourself for the final segment. It’s bleak, but hopeful.