The tenth of July, when these events passed, is my sister’s birthday. So, happy birthday. Why do people capitalize it like: Happy Birthday? Is it grammatically correct? I wouldn’t think so. I’m googling…bear with…bear with…I guess it’s correct. Weird. I still need to find her a birthday gift. Hopefully there will be something at the CBS gift shop — if such a place exists — and if not, I’ll just steal something from the set. Maybe a bit of lint from a chair or something? When it comes to Craig, she seems easy to please.

I was very attentive to my outfit today because I was going to be seen by NICOLE RICHIE! Oh, the thrill that sentence brings! I adore her as you know from my previous posts and simply could not wait to go to the taping. So, I put on my custom fit Tommy Hilfiger shirt, my light wash jeans, and my new leopard shoes and headed out the door. The shoes just feel so right. They clip clop like stilettos and make me feel extraordinarily tall.

A nice thing about living in West Hollywood is that sometimes you feel like you look a bit ridiculous, but the second you head out the door, there is somebody else who has far outdone you. I appreciate that.

I made it to the Grove in a short amount of time, model walking my way across the street — you never knew when a modeling agent or talent scout is going to see you in a car. Once I was inside the grounds, I heard somebody shout, “MARIO!” I turned to see him, but found that there was a crowd of people rushing at me and taking my picture. It wasn’t long before they realized that I wasn’t Mario Lopez. I am not sure why they thought I was Mario Lopez, either. We look nothing alike. Not even a little. That was strange.

At the spot where they film EXTRA, I found a decent spot to stand and reveled in the added height my shoes gave to me. I love tall shoes. No wonder ladies wear stilettos. The director told us all about who was coming on next, “Steve Tyrell…I don’t know who that is.” Oh how we all laughed with him. Who is he? I’ve seen him and I still don’t know. Just googled, still not familiar. Whatever, he was boring.

Next on the cue was KRIS JENNER. She was rather late, but she couldn’t help it, she lives in a paparazzi bubble, which personally, I would revel in. I wish I were famous. Some crew members passed out bracelets that she had designed but they wouldn’t give me one because I have a penis. RUDE! I would have looked good in it.

Suddenly the paparazzi was everywhere and all you could hear was the click of cameras. She was coming and she came out of nowhere and on a golf cart that drove her right to the stand. #ballin She was lovely and well spoken and I found her to be elegant.

Here’s a picture of us together on her Instagram. She apologized later for cutting off half my face, but Mario insisted on getting in the full picture. I have no idea why they’re posing like this. Also, hello bicep.

It took a while to get the area prepped for Nicole, what with the dozens of paparazzi and crazed fans. I’ve only recently started watching Keeping Up With the Kardashians, and I’m amused by it, but why are they sooooooo popular? It was neat to see Kris, though.

The people waiting at Extra were much more annoying than the ones yesterday. These ones didn’t make pleasant chitchat or insult celebrities. They just stood there pushing and shoving and Instagramming. There were two from Australia who were driving me mad. They would not shut up about their pained feet. I wanted to shout, “You’re weak, peasant! GO FIND A BENCH!” But, I’m a gentleman, so I stood there on my perfectly fine feet waiting to see Nicole. 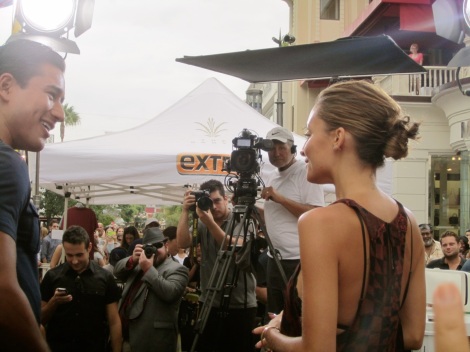 I was delighted by the entire interview. She was funny, interesting, and so skinny! So chic.

Mario then pretended he watched her web series, Candidly Nicole, and got her to dance with him.

We all had fun dancing together. Such fun that I even ended up on US Weekly. What did you achieve today, reader?

It was a complete thrill for me to see Nicole and I find her utterly charming. I regret not shouting out, “SANASA SANASA SANA SA SA SANASAAAAA!!!!!!!!!!!!!” but I was rather starstruck by her. 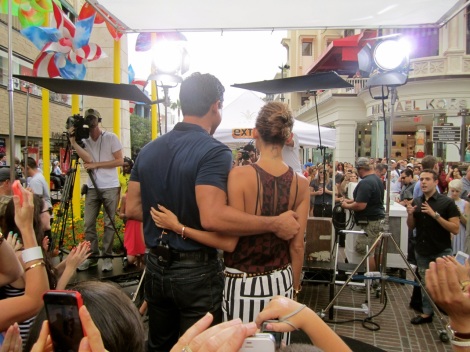 Now, if I see Paris, I will be the happiest man in all of Hollywood! She’s always in Malibu. I haven’t figured out quite where Malibu is, yet. North, I think. I’ll have to take a train up one day, I suppose, but I’m already running short on time!

I was too excited to head back to the apartment where I went back to the Veggie Grill (I have lost track of how many times I’ve been) and enjoyed some faux-chicken tacos that were unbelievably good. Like, I had trouble processing.

With about two hours before I needed to be at the concert, I decided to figure out how to get there. How hard could it be, really? Well, was I ever in for a surprise. To make things even more difficult, the Internet decided to stop working and my phone wouldn’t load webpages. Oh, I was in a joyful mood.

I finally managed to write down the bus stops I needed to visit and looked confusedly down at my Moleskine — none of those words made any sense to me! The total cash fare for my trip was going to be $6, so I decided to get a $5 day pass on my TAP card and save myself the dollar. Well, do you think that was going to work? The website would not let me register a card, the phone line was down for the day, and the nearest place to do it in person was a mile away. PUBLIC TRANSPORTATION IN LOS ANGELES IS THE WORST.

So, I had to go find a place that would give me quarters. Amusingly (not really) for living in a place where everybody drives, I couldn’t find a single gas station near me. Oh, how I laughed. I checked in at my local coffee shop where they have an ATM, but they refused to give me change. HAHAHAHA! Then I had to go back to that horrible Erewhon place where they finally gave me change. The lady behind the counter whispered to me, “You gon’ make it rain tonight!” She was Asian, so the accent made this even funnier. I was in a much better mood after that and went to the bus station.

I thought it was all going smoothly, but for some reason the rapid bus doesn’t tell you where you are — or I missed something completely. Either way, I was at Hollywood & Vine when I needed to be at Hollywood & Highland. LONG ASS WALK ENSUED.

I didn’t mind really since I had plenty of time and it was neat to see all the names along Hollywood Boulevard. Gloria Swanson, Desi Arnaz, Jean Arthur, and Yma Sumac amongst many more that I’ll have to go back and photograph.

On my walk, I passed by the Egyptian Theater which I’ve always loved and need to go back. Hollywood Boulevard was not elegant or classy or chic, but it was interesting.

I was finally at the bus stop and had to wait a half hour before the next one arrived. AN ENTIRE HALF HOUR. Time was running short for the concert! I was a bit worried. It finally arrived and I realized that I could have walked there in the time it took me to wait for the bus, but how was I to know?

The entire venue is very elegant, but I had the super super super cheap seats so I had to take like four escalators up to the top where I could barely see, but it was wonderful.

I sat there, listening to somebody called Roy Ayers randomly hit a marimba. Everybody lost their shit when he did this. I really felt out of place. But, I enjoyed the views of the Hollywood Hills and the Hollywood Sign perched perfectly on top of everything. It is a stunning place — the kind of place any singer would dream of performing. I don’t even sing and I’d like to perform there.

The lady sitting next to me had shot glasses and all sorts of tequila, but she moved before she could kindly persuade me into a shot contest. I would have won. I’m good at shots. You could probably have gotten pretty good seats by moving forward, but I wasn’t inclined to do so. I liked my seat way up top where I was two rows ahead of hobos. My ticket was only $8, they probably made that in the day and wanted something to do of an evening. And who can blame them?

QUEEN LATIFAH came out serving 1970s Joan Crawford realness. I died. She looked stunning! She performed quite a few standard jazz pieces which are really beautifully done with her voice. She has an amazing talent and I’d suggest that you go and see her if you can. She sang my favorite song of hers, “I Love Being Here With You:”

I of course did a marvelous job of singing along.

She even rapped and the woman in front of me in her seventies was LIVING. She was dancing and singing along. She was an excellent rapper. I wanted to be her best friend.

For many reasons, the concert made me feel rather lonely and a bit disenchanted. I don’t know if it was the drizzly weather or the romantic songs or the prestigious place, but I just kind of felt like I was wasting my life. This happens to me rather frequently. I think I have a bit of depression. Nothing too severe, but it happens and it’s real and it has no reason nor rhyme.

The closing of the show was really wonderful when she brought out a choir from Chicago that was composed of troubled students and sang her ballad from Hairspray, “I Know Where I’ve Been.” It was rather uplifting and I didn’t feel so miserable anymore.

The bus to take me back down to Hollywood Boulevard wasn’t running anymore that night, so I walked the fifteen minutes it took to get there and easily caught the bus back to my area. The boulevard was really sad with seedy night clubs and sluts on parade and bookstores selling stuff for Scientologists. I think I’ll head back there in the daytime.

One response to “SANASA & QUEEN”