It’s been a very sad day for me. I’m not even sure where to begin. I’m rarely at a loss for words when I’m writing, but I have so many different things to say all at once. Joan Rivers means a lot to me. I’ve said it a lot since she died, but I’ve never really said why. I’ve mentioned that I loved her comedy and her personality and all the obvious things, but that’s not really why I adore her and always will. I never thought that this would be a story I’d share and I’ve made no mention of it to anybody, but now that Joan is no longer with us — which I still can’t believe — I may as well tell it.

The first person that I ever came out to, the first person who I ever told that I was gay was Joan Rivers. It wasn’t a face-to-face meeting over white wine or at a book signing or anything; it was terribly unoriginal and in a handwritten letter. I’d just seen her show at a casino in Des Moines and unwittingly she changed my life. I didn’t know too much about her when I first got there — I’d seen her on television and I’d watched her award show coverage, but she wasn’t a big deal to me all those years ago. She was famous, though, and I adore famous people. I still remember what I was wearing and where I was seated and all the jokes she told. But more than these trivial details, I vividly remember the atmosphere there in the room. It was the most accepting place I’d been in my life. There were people from all walks of life and we were all there together having an amazing time as we squealed with laughter at jokes about Amelia Earhart’s disappearance. I took stock of the people around me and noticed the great crowd of well dressed men of all ages who were clearly very comfortable with who they were. I’d never been uncomfortable with my sexuality, but it wasn’t something that I felt I should share. I can’t recall why anymore, it’s just something that we have to deal with and go through. It dawned upon me there, though, that I was allowed to be completely myself and it was nobody’s business but my own to love my life the way I found it. 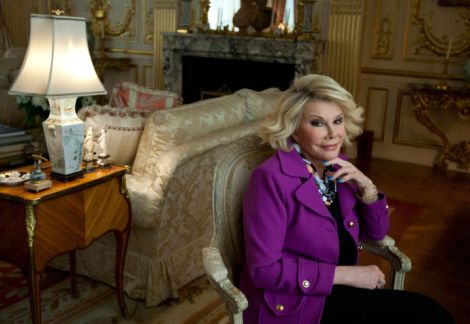 The show was fantastic and I wrote to her that night telling her so. When she received the letter, she must have thought I was insane. I told her all about myself and my thoughts and how much I appreciated her and how she had inspired me to live my life and not care one bit about the opinions of anybody else. I told her more than that, too, but I’ve since forgotten what I’d scrawled out in that effusive letter. It wasn’t long after that an envelope arrived in my mailbox. It was her picture and written out it said, “To Benjamin — great good luck.”

It immediately became one of my prized possessions and hangs on the wall in my lounge where I smile fondly on it each day.

I kept those private details of my life to myself for short time longer, but I finally did share with my family and friends and then anybody — and nobody cared at all. That was a bit of a letdown, I would have liked to have had a small parade or a rainbow streamer waved in my presence. Alas, that wasn’t to be the case. I don’t know if I would have had the wherewithal to come out without Joan.

My love for her only grew as time went on. I watched her every week on Fashion Police and delighted in her quick wit and humor. I fell madly in love with her “reality series,” Joan & Melissa: Joan Knows Best. That program is very scripted, but that doesn’t bother me at all. It’s a beautiful show and it’s so funny. Who wouldn’t laugh while watching Joan smoke weed in a SUV in the middle of Malibu? Who wouldn’t delight in Joan buying her entire staff the cosmetic procedure of their choice? And who couldn’t be moved to see the deep relationships that Joan had with her family and friends? So many people only know Joan as a comic and they think she’s mean or cruel or crude. They fail to realize that this is only the tiniest bit of who Joan was as a person. She was always funny and she could be off color, but she was sweet and kind and loving.

Comedy is different things to different people. It’s vital. Without humor, I don’t think there’s really a purpose in life. We need to laugh — it’s how we deal with an idiotic world. People are under no obligation to listen to Joan or laugh at her and I’m frankly appalled at the level of hatred I’ve seen online today. Perhaps her humor wasn’t always the most elegant or refined, but that was never the point — which many people are missing. The point was to laugh.

I devoured her books and spent long nights watching YouTube videos of her on The Johnny Carson Show or from her own late night talk show. I’d watch interviews she gave and I’d listen to her standup recordings. I remember watching her documentary, A Piece of Work, and falling all the more for her. She was an incredible human being.

She had a podcast called In Bed With Joan and I highly recommend you all watch it. When I was on the Amtrak from New York City to Chicago this winter, I stayed up all night watching the episodes as we went through the Hudson River Valley and through Albany and all sorts of little towns. I sat in the lounge car and laughed my ass off. Each episode cracked me up, and it wasn’t just the gin, it was her amazing sense of humor and also her wonderful honesty. I’ve always known that sometime in my life comedy will play a role. I often utilize it here in my posts, but I want to do more with it. As you may know, I have a latent desire to be a comedian. I have not one iota of an idea how, though. I’m not sure how you write a joke and I’m not sure about timing or pacing or even how to most effectively out-heckle a heckler. As I laughed and laughed that night, though, I made a promise to myself that I would take comedy classes. I didn’t set a certain goal date for this, but it’s just something that I have to do — my bucket list, I suppose.

I will miss Joan terribly, and that’s because I’m selfish. I don’t want my world to change with her gone. I know that she’s better off now. I knew she wasn’t coming back to us anyway. Call it psychic intuition or common sense or whatever, but the second I saw that news article last Thursday, I knew I’d lost her. I’ve been in mourning for a week and it’s been rather bleak. I’m not often sad over death, but Joan got to me. I’ve always had a vision of her in my head as my celebrity grandmother. It’s a nonsensical fantasy, but it’s true nonetheless.

It feels strange to admit, but I’m filled with relief now that this whole unexpected and horrible affair is finished. It’ll be strange not to see her on Fashion Police or to read her Tweets, but Joan is going to live with me forever in the back of my mind and at the forefront sometimes. She’s a role model to me and an icon. She made me laugh for years and she’ll still make me laugh for years to come.

I’ll leave you with my favorite quote of hers. It wasn’t a joke, but rather a serious comment on life that I’ve held dear for some time, “Things are fine and life is fine. And life is so much fun. It’s one big movie.”