I thought I posted this a month ago…but I guess not. I have a hard time wrapping up my trips. It’s getting worse every time I leave. I am obsessed with travel. It’s the thing that makes me feel the most alive, so I hate to write about the end. It’s cheating if I don’t, though.

I enjoy New York City whenever I visit. The hectic pace, the endless traffic, the buildings that soar up to the sky, and the incredible wealth of culture is endlessly inspiring to me. I would happily explore every inch of Central Park with nary a complaint. Intrigued and revitalized though I am by the city, I never have felt connected to New York. Something I can’t quite understand holds me back, so I never assimilate. When that glorious moment happens, though, in other places around the world, I know I’ve struck gold. When I’m in Paris, there are few Parisians more Parisian than me. In Los Angeles, I feel as I have lived there all my life. In Luxor, I am perfectly at home in a galabeya guzzling mint tea or wandering around ruined temples. I don’t know what it is about New York that hasn’t clicked, but I haven’t found my niche. I’m not sure if I ever will. I’m also not sure if I want one. I enjoy and appreciate the city, but I will leave it at that for the time being.

After packing up and gorging on croissants and a couple lattes at the Café Gitane, I hit the streets for my last afternoon. My flight back home to the old doldrums was only a half day away.

I wanted to go and visit the Cloisters, an offshoot of the Metropolitan that specializes in the art and architecture of medieval Europe. But I didn’t. It’s far off and I wasn’t in the mood to risk my flight home, little though I wanted to come back to Iowa. And so, I just walked and walked and walked south toward Wall Street. There’s an old cemetery down there, and if there’s one thing I love, it’s an old cemetery.

I probably chose the most uninteresting street in all of New York to walk down, but I enjoy walking, so it was all right for a spell. I think it’s a great shame that there isn’t a casual strolling competition in the Olympics. I could walk for years without stopping. Walking is something I truly enjoy. Give me a podcast and a sunny day and I’m good for hours. But it was a bit nippy and I didn’t have a podcast and I was reflective. This little trip had been more emotionally draining than I had prepared for. It was exhausting to be in perpetual mourning for Paris, for summer, for my thirty-one inch waist, and for freedom. I decided to cheer up just as soon as I arrived at the World Trade Center Memorial, and, of course, it is rather impossible to be cheery on the scene of one of the most violent attacks on American soil.

As a kid, I went to the very top of one of the World Trade Center towers and stared down at New York City, which didn’t look like a whole lot from up there. I don’t remember much else. I do remember the lobby…but now that I think back on it, maybe I don’t remember that at all. I do know I went to the top. And then, years later, I went back to New York City for my seventeenth birthday and saw the giant pit in the ground where they were still cleaning and removing rubble. It was a disaster. (And I was a disaster back then, too. I really didn’t know how to style my hair.) And now to see that monstrous hole in the ground covered in black stone and pouring water, well it was rather strange.

I was unsure what the symbolism of the memorial was — it seemed rather like a portal to hell — but it was certainly more impressive than I thought it would be from pictures. It’s impossible to convey in words how big these cavernous pits are or how beautiful they are or how melancholy. I was gripped with an intense sadness, which, I suppose, was the point. It didn’t help that little French flags had been stuck in the railings all over.

I was sick to death of all this misery, so I scuttled over to Trinity Church. That’s a good word, isn’t it? Let’s all say it together. One…two…three: SCUTTLED! Ah, good fun. Anyway, Trinity Church was built in 1846 and looks rather out of place in the middle of skyscrapers, but that’s what makes it special. The inside is filled with stained glass and it’s wonderfully dark and European and I was instantly at peace. 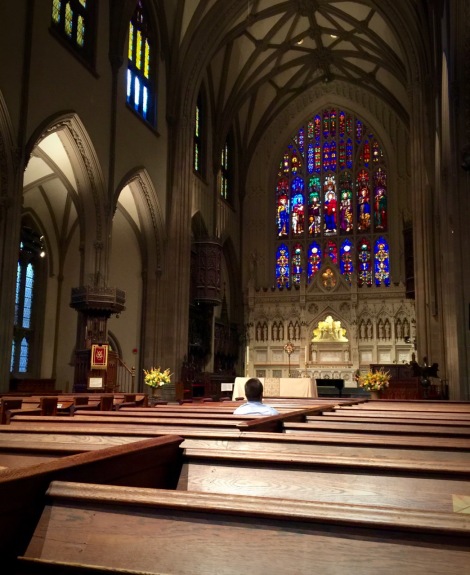 Y’all know I’m the least religious reverend in the world, but there’s something intensely soothing about a church. Maybe not all churches, but a cathedral or a gorgeous chapel can really calm me down. I’ve spent time in so many Parisian churches, just enjoying the quiet, the chill, the dark. Maybe that’s why vampires are always living in churches in Gothic horror? I would live in a church if I were a vampire. Wouldn’t that be lovely, having a crypt in a cathedral? Maybe that’s just me…

Always bumping into Liz and Phil.

I came to see this particular church because it has a very old cemetery outside of it, in the middle of New York City, and it was absolutely stunning. 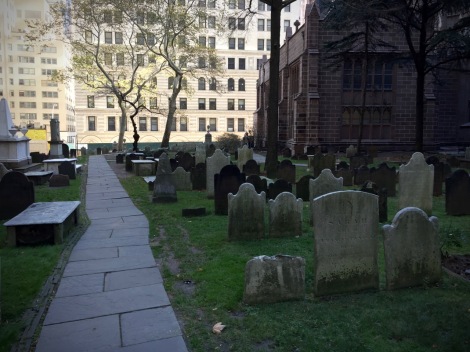 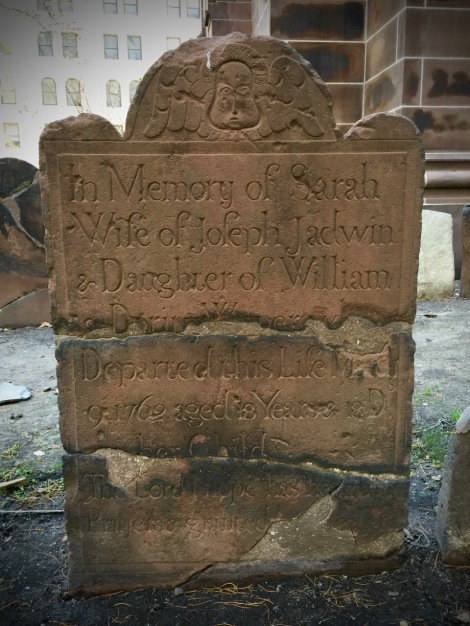 I love the curved scrawl on the eroded stone, and I thought it was a lovely place to wind up dead. I even saw a memorial for Alexander Hamilton, but I haven’t figured out if he’s really buried under there or not.

I had some more time to kill before I had to go grab my bag, so I opened the map application on my iPhone and looked for something interesting. A little park dedicated to the Titanic popped up, so I went, but it was absolutely nothing, so I carried on into Chinatown.

I love Chinatown. I’m always the tallest person there. I window shopped for ages, wondering what half of the items for sale were. That’s a lie. I wondered what most of the items were. The next time I’m in New York City, I will certainly have to find a tour of this area. It’s sprawling and there’s so much variety. And I want a knockoff Louis Vuitton duffel bag, but I was once again thwarted.

So I carried on through Little Italy, drank good espresso, and made a leisurely jaunt back to Jane Street. I had to stop in the Eric Kayser bakery first, though, because I’ve been to his shops in Paris. I had a lemon meringue tart and fell in love with the man behind the counter. Our romance was doomed from the start, though, since I was leaving the city. I nibbled the tart and thought about the children we’d adopt as I walked back to the Jane Hotel, and then my time was up.

It wasn’t long before I was buying a ticket back to New Jersey and then riding to the airport. New York was a dream and Newark was reality. That was okay, though, because I have discovered how wonderful the people of New Jersey are. They’re truly charming and kind and not at all the caricatures that are portrayed on the Internet and television. There weren’t guidos anywhere and security was a breeze. The TSA agents were telling jokes and there were French flags everywhere. Rather touching.

“How you doing, baby?” a kindly New Jersey waitress asked me in a sports bar. Her name was Wendy. I loved her. She gave me free soup. And then I waited, sipping moodily on my gin and tonic for the flight to board. The door in front of me was for Minneapolis, the one right beside it was for Paris. How could life be so cruel? But I had no ticket for Paris, and so I stepped aboard the plane and took my seat next to an elderly man with an iPad Pro listening to the new One Direction album.

Is this my sugar daddy? I thought to myself.

And then it wasn’t long before the plane was jittering and shaking through the worst turbulence I’d ever been through. And then it was only a matter of time before a smaller plane was careening towards Des Moines through worse turbulence. And then I was in my bed, with my cats, wishing my life were exceptional every day, not just on those magical days when I’m out in the world.

2 responses to “Moody in New York”