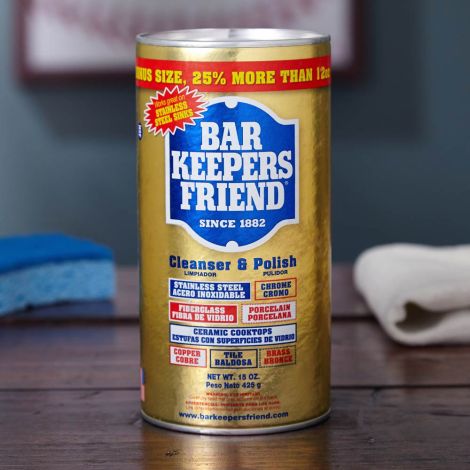 I have had a Le Creuset dutch oven since I graduated from high school. When I moved to Paris to study at Le Cordon Bleu, I took that heavy lime green pot across the Atlantic with me. I regret the added weight, but not the act. I use my dutch ovens (I’ve two of them now) for absolutely everything…and it shows. In the past couple years, I have taken to baking no-knead bread in the heavy enameled pan which turns out deliciously, but it makes my pot look like actual shit. Somehow, little browned bits have gotten burnt into the glaze. I was sure it was ruined for the rest of my life. Even the inside started to look rough, with blackened scorch marks. It worked perfectly fine, but it did not look good. Now, I have a little neurosis — well, I have many — but I constantly think about how I would feel if Martha Stewart were to come over at any moment. Would she approve? Would my housekeeping abilities offend her? This has driven me to the point of complete mental breakdown several times in my life, but I can’t shake it. This madness is especially traumatic in the summertime when I see weeds and fallen tree limbs everywhere. I could not stand to see the “seasoned” Le Creuset pans anymore. So, I took to Google. The insides were super easy to clean. All you have to do is put a tablespoon of bleach in the pan, fill it up with cool water, and let it sit overnight. In the morning, you just give it a little scrub and the thing is flawless. Like new. I cried a bit. You can’t bleach the outsides, though, which is hella annoying, for fear of damaging the enamel. I bought a container of Bar Keepers Friend for $2, a powder cleaner that many people swear by. It takes a SHIT TON of elbow grease, but manages to scrub off the browned bits that no amount of dishwashing would take off. I do a bit each day because it will take me a couple hours to finish, but at least my pans will look great soon. If you use this product, wear gloves, because this shit will dry the shit out of your hands. My fingers look like they’re being mummified, but it’s worth it. 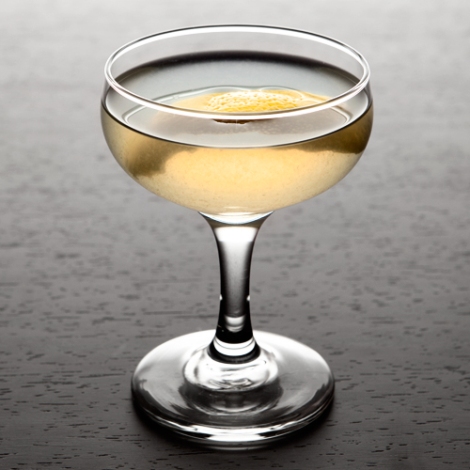 I was scrolling through Martha Stewart’s website, as I so often am, and I stumbled on a list of ways to treat yourself in the mornings. It went on and on about breakfast in bed, doing yoga, and all sorts of time-consuming ways to wake up. That might be nice if I woke up at nine o’clock, but when you work at a school, your hours are ungodly. My alarms start ringing in the five o’clock hour. No matter how well rested I am, there is no force of God that is going to get me doing yoga before noon. But I wanted a luxurious weekend, so I thought about all the things I love, and of course the first thing that came to mind was gin. So, inspired, I googled breakfast cocktails and the very first result was something called a Breakfast Martini. “What a good idea!” I told my cat, Edwin, who was lying beside me. He blinked slowly in response. The ingredient list was suspect, you’ll see why in a moment, but I shook one up. It was absolutely delicious! I won’t say it’s refreshing or it woke me up. But…it’s so nice to have a martini in bed. Shake with ice: 1.5 ounces GOOD gin, .75 ounces FRESH lemon juice, .5 ounce HOMEMADE simple syrup, and 2 teaspoons orange marmalade. Yes, marmalade. I made the same face you’re making now, but the Seville oranges get strained out through the shaker. Pour into a chilled martini glass. (You do keep your martini glasses in the freezer at all times, don’t you?) Enjoy. It was absolutely delicious. I might have had two or three. Okay. I did. I regret nothing.

As I said last week, I have given up on my war with avocados. I have forgiven them for their supposed sins. I think I just hated them because they were trendy. I can’t tell you why. But now that I have signed a peace treaty with the savory fruit, I have found uses for it everywhere. It makes a phenomenally delicious addition to brown butter sauce when it is sautéed and tossed with ravioli. The greatest use I’ve found for it, though, is in an omelette. I caramelize a bunch of onions, mix in some garlic, and then toss in the eggs. I melt Boursin and lay avocado on top and let it warm through. I then stuff my face with this remarkable melange and cry a bit, regretting all the years I spent not eating avocados. I was so damned foolish. When I sit back and think on all the wonderful dishes I’ve passed up, well, I could just scream. I even thought guacamole was disgusting for a spell. Can you imagine? I’m so glad I’ve reformed. Maybe it’s my inner Californian coming out?

Spring has not really sprung, yet, but it is not too far away. The temperature climbed to a glorious fifty-five degrees this afternoon, and after months well under freezing, this felt like a tropical heat wave. The drifts of snow quickly faded away, and the ice covered surfaces vanished. Yards and fields are oceans of brown now, and though the country road I live on is mainly a gigantic vat of mud, it’s a marvelous step up from the winter hinterlands I’ve glared out onto for too many weeks. There is no reason anybody should live in a wasteland like this. It’s bad for the soul. So today, when I could stand being outside without wanting to leap off of a bridge, I finally started to feel pretty great. My seasonal depression has been the best it’s ever been this year, and I have a lot of suspicions as to why that is, but this improved weather helped it even more. It is supposed to be even warmer tomorrow — all the way up to sixty degrees. That will feel frigid in a few months, but I have no doubt that you will be able to find me tomorrow afternoon on my chaise lounge in the vineyard, wearing only a speedo, sipping on a cocktail. It will be divine. When I get the daring to finally move to California, I hope to never remember these doldrums. Every day is summer out there in paradise. But, for the moment, these temperatures have cheered me. I can’t wait for the lilacs to bloom, for my salad garden to fill up, and for outside walks to be a regular feature of my to-do list once more.

I abhor window screens. I appreciate them, truly, but I cannot stand the way they look. In the summers, I love having them around, filtering the flies, mosquitoes, and monstrous bugs out of my house. During the rest of the year, though, my eyes can’t focus past the wire mesh. I can see only it, not the horrific winter landscape surrounding me. I think this trouble started, like most of my troubles, when I moved to Paris. It changed me as a person. There’s nothing better than spending time in Paris during the impressionable late teenage years. It molded and sculpted me more than decades of Iowa ever did. And in Paris, like a lot of Europe, the concept of a window screen doesn’t exist. They don’t need it. They barely have bugs. I saw a fly once in Paris. That was it. I don’t understand why Iowa has such a vast and vicious insect population. When the weather is finally warm enough to go out of your house, which has held you prisoner during three months of endless sub-zero winter, you can hardly fetch the mail without contracting West Nile Virus, getting latched onto by a Lyme Disease ridden tick, or bitten by a Brown Recluse spider. This place is hellish. I think going through the Amazon rainforest completely nude would be safer. No joke. Anyway, I hate window screens and I want to get rid of them during the winter and fall. Most quality windows have the option to pop them out, but not mine. I believe my windows are the cheapest windows ever constructed. It would be awesome if they could retract when unneeded. I should patent that. Those dumb screens are the worst.

One response to “THINGS I LOVED/HATED THIS WEEK #134”