Today, I made a mission out of trying to find some free wireless Internet, which, after miles of walking, several bouts of hypothermia, and rather urgent dehydration, I finally found.

Last night I called Ma to find places for me to go to find free wireless, I had read that it was in some museums, libraries, and parks, but I didn’t know which ones. I called her again this morning to find her results, she said that there was supposed to be Internet in McDonalds and the area around La Defense. Great, I thought, McDonalds is right down the corner, and I remember that they have wireless there in the United States…everything should be fine.

I packed up all of my electronic necessities, grabbed my keys, shut the door, turned the key, and nothing…just nothing. The key wouldn’t turn, so I walked inside to see that the deadbolt was probably an eighth of a millimeter off alignment and wouldn’t budge. At this moment, I’m not ashamed to admit, I lost my sanity. First the electricity last month, then the Internet this month, and now the door? It was too much for me to handle. I kicked the door with every hope of making it feel bad, even though it’s an inanimate object, I even screamed a little bit, making the dogs next door not very happy. I called mother to complain, and tried again, my kick must have set it right, because it worked now, albeit, unwillingly.

Sending curses at all the people I shuffled past, I made my way to the McDonalds to grab ahold of their wireless signal. Would you imagine my delight, when their signal was too weak to connect to, inside of the restaurant? I was laughing with hysterical delight as I made my way down to the Metro to ride to the first park on the list, partially deranged.

The first park was the Jardin de Tuilleries which is just outside of the Louvre, the ending near Place de la Concorde is my favorite place in Paris, so, I thought that being here would calm my tattered nerves, but no such freaking luck. I marched all over that stupid park looking for a wireless connection. I could connect to Orange or Neufbox, but they wouldn’t let me buy time, I already had to have an account, good business plan, that…idiots…

I finally allowed myself to realize that I was not going to have any luck here, so, I just meandered around, watching the people. I had been too annoyed to realize that it was very nice out, beautiful actually. The sun was burning away the chill and leaving us with very springlike conditions. Many people were sunbathing, in coats, around the huge fountains and ponds in the lake. There was a man renting little sailboats to put into the water like they do in Central Park. There were several soccer matches — I don’t have nearly enough coordination to do that. I’d just stand there, which was what I did in PE when we played soccer.

I walked by the Carrousel du Louvre, and I noticed a new network pop up on my iPod’s screen. It said GRATUIT in the name, which means free. So, I threw myself against the wall of the Louvre and connected, it took me to a log in page, but it was for everybody! Free wireless Internet for 20 minutes! It wasn’t long enough to haul my laptop out, but just long enough to download my emails and check perezhilton.com. I had a few tears in my eyes as I read about the latest craziness in Hollywood. My time quickly ran out, and I had to move on. I decided to go to another park, knowing that nothing would probably come out of it.

I decided to go to Porte Maillot, the area Ma and I had stayed at in 2007, because I wanted to see it, and because there is a huge park next to it, the Bois de Bologne. I was excited to walk around that area again, it was the first place of Paris that I ever knew well. It was much more modern than I remember, shinier somehow. Sadly, my beloved first Shopi is gone, it’s now a car rental agency. There are car rental places all over Paris, I suppose nobody owns a car… It was quite devastating to see that facade in Shopi’s place. I had hoped that it was just an illusion, and it was a bit further down, but it is really gone. The Best Western is still there, but they seem to have a different wireless strategy now. No more Boingo, seems like they have actually bought their own services. Good for them.

Went down the street, following the signs to the Bois de Bologne. I had to go into a creepy, hobo infested public subway thing underground to cross the busy street. It smelled of urine, had shattered liquor bottles all over the ground, and had cobwebs everywhere, I was happy to be out of it. I walked and walked on, following the signs, basking in the glorious sun. I passed more and more soccer matches. Why is American football called football, I mean, aside from running, it has nothing to do with feet? But, then, I know nothing about sports, so it may be incredibly important.

Finally, I found the park, which, given it’s size, is rather difficult to get to! I watched groups of old men playing Pétanque and arguing with each other. It was a game that I know how to play, so it was kind of fun to watch. I walked along one of the many paths that twist through the park and saw a group of rabbits frolicking in the grass and weeds. Some were black, and some were grey, and some were white, and some were orange. I enjoyed watching them, but when the saw me, they all scampered away.

I next met a very friendly crow who hopped along next to me for several hundred feet before finally flying away, leaving me all alone in the middle of the woods. I realized that it was a rather creepy place all alone, and could easily see how all the hookers hide here once night falls. But, getting back to the point. No Internet.

My last hope lingered in the distance, hardly visible, La Defense! I made my way out of the park and crossed a highway! It was so exciting to see a four-lane highway with cars driving quickly that I about wet myself. The roads in Paris can hardly hold one car. And, it was the first highway I’d seen since last year!

Back on the subway, I was quickly to La Defense–a strikingly beautiful area. I got off earlier than I had last time so that I could walk around the city area. There are no laws here about building height, so there are skyscrapers at every turn, it made me feel like I was in New York City…I love it there. Around every corner, there is some kind of modern art. The area I was in was called the Esplanade de La Defense. It starts off at this wacky pool and goes straight back to the grand arch. From the Esplanade, you can have a great view of the Arc de Triomphe and the upper half of the Eiffel Tower. It was so warm and relaxing, I’ll have to come here more often.

I climbed up a few stairs and felt as if I had been dropped off the Titanic into the middle of the freezing Atlantic. It was FREEZING! I don’t exactly understand why, but there was nothing to stop the wind, so that is probably what caused it. My teeth chattering, I sat myself down onto a bench and began searching for Internet. It had to be here! There was a ton of different services that all required logins, so, no luck. One of them looked like it was from the government, so I just gave up. I marched to the pay phone that was staring me down. (They are everywhere up here, but nowhere near my apartment. The indecency.) I whipped out my calling card and used the last 11 credits to complain to my mother again, I’m sure she enjoyed it. 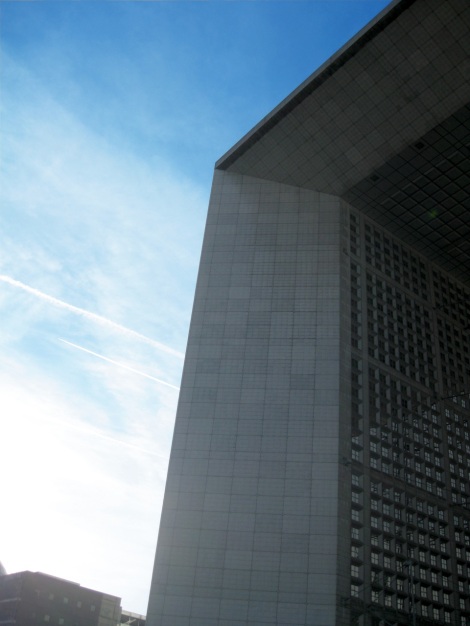 I was here already, so I decided to climb to the Arch. There were signs from SNF (a wireless company) mocking me about their free wifi, I should say, their free, nonexistent wifi. At the top, is a nice view, but not great. I’d come here, if you are staying in Paris, but don’t spend too much time at the Arch, meander around the city and Esplanade.

Something made me walk down the stairs around back only to discover a cemetery. I thought that was creepy and cool at the same time, having death so near the business district, I guess I found it more ironic, then.

I pulled out the iPod without any hope, looked at the wireless listings, and saw…GRATUIT! Jumping for joy, I ran to the steps, sat down, pulled out my laptop and connected to the INTERNET! REAL FREAKING INTERNET! AND I WAS ON IT! Suck it company! My computer is fine!

Squeaking with joy, I began to read all of the gossip and news I had missed out on. I read 27 pages of perezhilton.com before I was caught up! (What was your record, Alison…13?) Why is Perez dressed as Queen Elizabeth I for the Britney Spears concert…I’m not so sure about this new development.

I read and read and read, then went to type my emails, when I realized that my hands wouldn’t move. They were bright red and very unwilling to type, so I had to peck at the keys until I feared I was going to lose my hands to hypothermia. I published my blog, and ran back to the train.

I had forgotten how far I had travelled today, it was over forty minutes back to the apartment! I could hardly flip the final few pages of The Picture of Dorian Gray, my hands were still frozen, and even redder. They started to feel as if there were pins in them, so I knew that movement and blood was coming back to them.

I finished my book after dinner. I was sad to see it go, but horrified by the ending as well. I mean, if in the end, I didn’t go crazy and murder all of my friends, I wouldn’t mind being beautiful for eternity as my portrait aged and bled. I think it will be a good movie, but book adaptations never are. I’ll have to download the Angela Lansbury version when I have Internet again, which, will probably be never.

Then, with both sadness and joy, I went to bed.