We could just not get started today. Everything seemed to drag on and on and on. Jessica, who usually manages to get going eventually, no longer does. I’m pretty sure she is dying of homesickness. I don’t feel like that often–I’m home wherever I am. I miss my animals, but not my family very much. Don’t think me heartless. We talk every day on the phone and via text and email. I’m in constant contact with them, so I don’t feel like we are separated any more than if I had gone to Des Moines for the day. I’ve never been a touchy-feely kind of person, so the distance doesn’t bother me as much as it does Jessica. I do miss petting Tiger and Chiffy, though, and shooing the kittens away from my leeks.

I chose the Catacombs for our destination today, as I think they are fascinating and I was sure Jessica would think so, too. Plus it’s cold down there beneath the city, so I was sure she would like that.

We took the RER across town and were quickly walking across the road to the entrance. There was a man crossing the road who wore his pants so low that he had to hold them up when he walked. He was wearing boxers and the pants were so low that you could see the skin of his thigh. I’m not sure what kind of a fashion statement he was trying to make–I don’t understand that trend.

There was a bit of a line at the Catacombs and we had the unfortunate luck to be standing behind a tour group of what might be the most annoying Australians on the planet. There was man in a blue t-shirt from a bar and Oakley sunglasses matched with ill fitting shorts (you understand my instant disapproval, I’m sure). He was loud and vastly irritating. He made grand statements about how much he disliked almost everything, how much he loved the British Museum, and how stupid he thought Americans were with roundabouts. Now, I had to resist the urge to punch because first of all, I’m surely not a good man to have in a fight, and second of all: I love roundabouts with an intense, burning passion. I think they are the single most fabulous creations in the history of human travel. They are ecological, speedy, and fun. The man claimed that Americans whirl about in roundabouts for hours because they can’t figure them out. Admittedly, there aren’t too many roundabouts in America, but they are becoming increasingly common and I have never seen anybody make more than one twirl through. I hated him before, but this comment of his made me ask the Creator to make sure he got lost for eternity in the depths of the catacombs. It would be deserved.

We made it to the entrance probably twenty minutes after lining up and met the deeply unpleasant staff. I don’t know why they hated their lives so much, at least, it seemed that they did. We paid for our tickets and started going down and down and down. It was much deeper than I remembered it being and I loved spiraling down the stairway.

Once we were deep down, we wandered along corridors with shallow ceilings and close walls. There was the occasional chamber, like this one where Jessica posed: 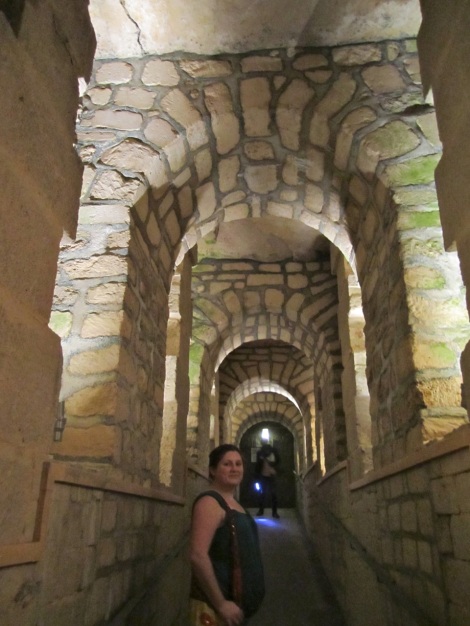 “It is by the menace of a demon that death entered the world.”

But for the most part it was very dark and damp. There was a small Asian boy ahead of us who might have been even more annoying than the Australian. The ceiling was covered in condensation and occasionally dripped down. Unfortunately, one of these tiny drips fell on the boy’s head and he lost his shit. He shouted to his Father, “DAD! DAD! SOMETHING FELL ON MY HEAD! SOMETHING IS ON MY HEAD! DAD!” His father tried to calm him down. “It’s probably water.” “WHAT IF IT’S BACKWATER? I HOPE IT ISN’T BACKWATER!”

Jessica had her fists balled and ready to punch. We loudly mocked him as we went ahead of them and looked on all the skulls. The first glimpse of them is really rather shocking, but after a little while it becomes monotonous.

Corridor after corridor stuffed with bones. Beautifully macabre, but very dark and filled with pesky tourists. Jessica and I gazed slowly like everybody at first, but were soon hurrying along the halls, screaming each time we felt a drip of water fall on us–good fun. Then when we were on the way out, there was a damp path that looked like a black river, so of course we pretended we were in Hocus Pocus and began shouting “Tis a black river! Tis firm as rock! Tis a road!” We were terrible tourists and thoroughly enjoyed ourselves.

We climbed up and out and had to go through a bag check to make sure we hadn’t stolen any skulls. Somebody had attempted to, as there was a skull sitting on the desk. I would have enjoyed one for a souvenir, but not at the risk of jail.

We headed back on the train and went entirely across town to try out a bakery I had on my list called Boulangerie 140. It was supposed to be divine. There was a short line and it didn’t look too exciting so I ordered a croissant–they had won some award for them, so they should be alright. The same bakery runs a fancy pastry shop around the corner, so we popped in there too. I bought a lemon tart, a coffee eclair, and some savory petit-four for Jessica. The shop was gorgeously done, with gilding and painted ceilings. I appreciated that. Then we walked along the road to the Parc des Buttes-Chaumont so that we could eat our nibbles. 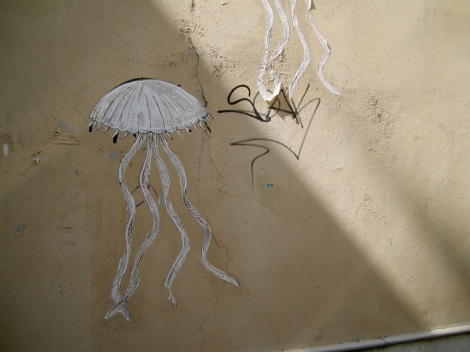 Along the way we saw another bakery, so, of course we went inside. I was interested by this one because it was obviously not made for tourism and gourmets, it was an authentic neighborhood bakery. They sold something called an orange tart, which I had never seen. I quickly had my tart and Jessica bought a baguette. I loved their shop–they had the most beautiful font for their sign. I think it is probably a relic from the 30s and 40s–the epoch of designer perfection in my mind. 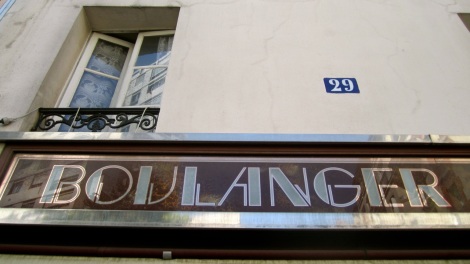 You know an era that wasn’t good for anything? The 90s.

This building is an offense to my eyes and to the city of Paris. It needs demolished immediately. How ugly!

Soon we were at the park and were happily perusing the pathways. Jessica was not happy. She hates parks and she hates picnics even more. I don’t understand how you could dislike either.

I couldn’t find anywhere that I wanted to sit, so we kept wandering along until I found the gorgeous lake and took a seat on a shady hill. It was gorgeous. Jessica was scowling something fierce. 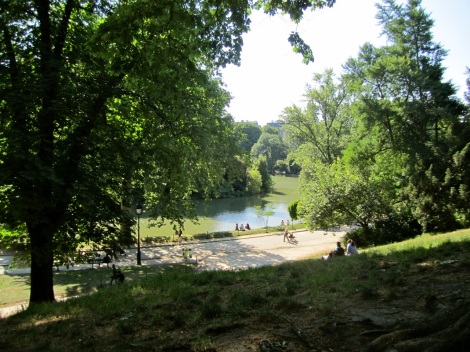 I ate the croissant first–nothing special. Then I had the orange tart–so good. It needed to be smaller and made with a creamy custard, but the idea of it is so wonderful. I can’t wait to recreate these back at home, I’m already cooking up several varieties in my head to try out. Should be fun.

Jessica grumpily spat out the nibble I had purchased for her, declaring it vile and then mumbled, “I hate parks and I hate sitting on the ground and I hate picnics.” I told her that she might as well go and join Al-Qaeda. She didn’t find this as hysterical as I did.

We got up to leave and the hill was much steeper than I had anticipated. I started moving too fast and then ended up running down faster than I ever should have. I couldn’t stop myself and had to hurdle over a (mercifully) short fence and stumble to a stop. Jessica was wiser about the whole thing and took baby steps down. It took forever.

We stared at a girl in a full Indian outfit on the hill being followed by a man with a camera and another with a video camera. She was obviously modeling–but she wasn’t doing a very good job of it. Very Modeling 101, you know the type, touching her face, framing her face, swooshing her skirt. Very amateur. Jessica and I would have helped her out, but honestly, we couldn’t be bothered.

The shortcut was closed for some reason, so we wandered through the manmade grotto with a waterfall and then took the long way out. Jessica shouldn’t have minded too much though, because she found cotton candy.

And now, we were both completely exhausted. I couldn’t have done another thing. We sluggishly bought some cheese at Monoprix and then made our way upstairs where we both kind of collapsed for the rest of the night.

I had ravioli, which were delicious, and watched Martha make a lemon cake. I was happy that there were new podcasts that I hadn’t seen. I’ve seen almost everything Martha has ever done.

As I was browsing the interweb, I came across this article about Dita Von Teese in Paris. I was right when I guessed that the man with her was the Count and the girls were her sisters, which I deduced after stalking her Twitter. If only Jessica and I had been patient and stalked her some more we could have been in paparazzi photographs! It’ll happen soon enough, though, surely.

Also, the lemon tart was quite nice. 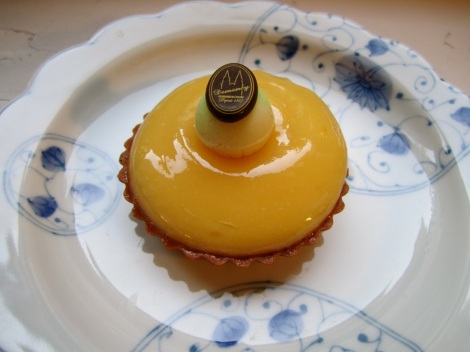