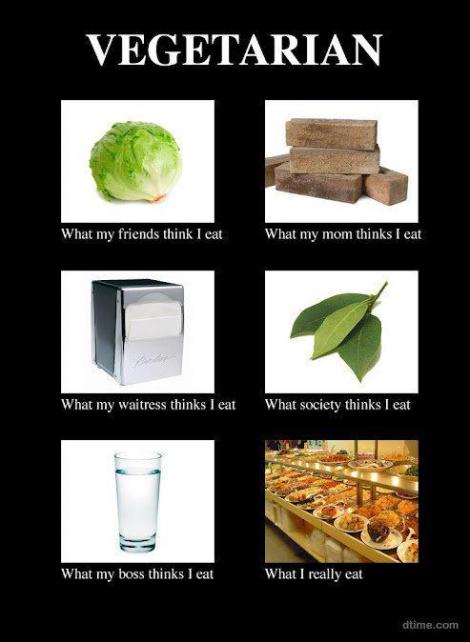 I wrote extensively about this in my film blog this week, so I won’t rapturously go on and on, but I love everything about being a vegetarian. There is such a simple joy in knowing that nothing you’re eating had to die for you to do it. Instead, I have an entire world of new and exciting things to try. I used to think fruits and vegetables were unpalatable, but now, I find them full of flavor and thrilling. I eat grapefruit regularly as a dessert! It’s madness, (It’s carpet madness! Holla at the Ab Fab reference!) but it’s wonderful. I know that many people might think that it’s a restrictive diet, but that turns out not to be the case, I still eat way too much! When I decided to do this years ago, I thought it would be difficult and that I’d never be able to eat the things I used to love, like boeuf bourguignon ever again. I was wrong. You can make it much more simply with mushrooms and it’s even more delicious than it is with chunked up cows!

I received Martha Stewart’s latest cookbook, Meatless, in the post this week and I cannot wait to try out all the recipes. Give Meatless Monday a try, or just go vegetarian. I can go to almost any restaurant and find something to eat, it’s not a difficult thing to do at all. 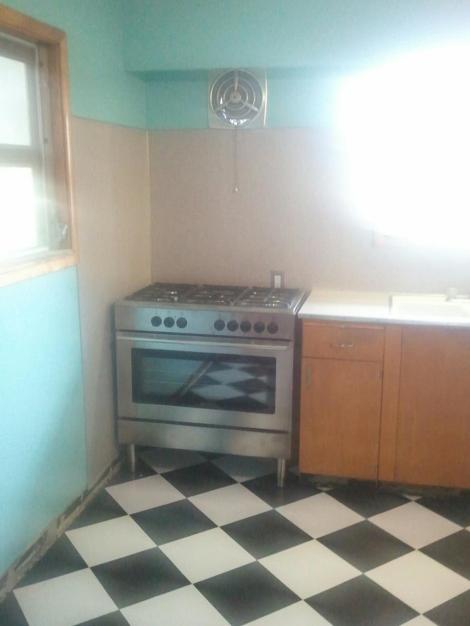 Ever since the first time I went to IKEA, I have been obsessed by this gigantic oven they used to sell. I don’t think they do anymore, which is a shame. It was about $2000 and I lusted over it. I thought it would be the best thing to ever happen to me with its extra large oven, sleek stainless steel, and gorgeous gas cooktop. On one visit, I saw it in the discount section. Somebody had bought one and discovered a dent in it. Allegedly, that was the only issue, so I bought it for half price. I felt so clever. My father and I went up to pick it up and stopped for some delicious Indian food on the way home. Then, the oven sat for some time in my kitchen. I didn’t know how to set it up, so a professional had to come out. It only kind of worked. I was pissed. The gas worked beautifully, but the oven, the part that I was most excited for, did not. Two Whirpool specialists came out several times and finally got it running. A wire had been loose. A single little wire! Now it works well. I haven’t done as much baking as I expected to, so on Tuesday, I was excited to host Lollipopalooza, where Alison and I did a bunch of baking. We made challah bread and orange lollipops and grapefruit macarons. I am so ecstatic with the way the convection feature of the oven cooked the macarons. They puffed up beautifully, aren’t brown at all, and are magnificently delicate. My old oven made them rather crispy and they took a few days to mature. Not in the convection oven. I think I’ll make my macarons exclusively on convection now. Simple things like that thrill me.

Pretty drinks are fun. Drinking them is fun. Putting them together is fun. Drinks! I bought a bottle of Campari last week to make a batch of grapefruit macarons and have been experimenting with it ever since. I’ve created a concoction that I call a Nicky on the Rock. (Nicky is the name I’d rather have and on the rock because I pour it over a single ice cube into an antique champagne glass.) In a cocktail shaker, I mix: blood orange syrup, lime juice, orange juice, and top it with Campari. Shake until the shaker frosts, pour out, and enjoy. Also, the word cocktail is hilarious for reasons any immature person will understand.

I’m immediately delighted whenever I see a home with push button switches–even if it’s only in a magazine or on television. I don’t think there is a more elegant piece of electric hardware in existence. I don’t understand why we have moved to switches. Switches are plain and uninteresting and very demode. Push button switches are the very soul of fashion. Someday, the lighting in whatever home or apartment or cottage I end up calling my own will be exclusively controlled by the charming click of a pearly push button. I’ve never seen them for sale in stores, but you can easily find them on the Internet. Bless the Internet.

I don’t know why it took me so long to notice this, but now that I have, I’m delighted. I’m really loving the latest release of iTunes, even though I don’t use it nearly as much as I used to since I am using Spotify a lot now. Great service that I highly recommend. It can be annoying when you can’t find the music you want, but you can discover a lot of new music that you never knew you’d like. Anyway, the new iTunes is absolutely gorgeous and the way you browse your music is really very nice. All your albums are arranged by artist and then album title. When you click on one, the album expands into an attractive little window that lists the tracks and shows the artwork. A delightful thing it does, though, is the window takes on the color scheme of the album. So, if there is a lot of blue in the image, the background will be blue. It’s little touches like those that make me adore Apple more and more.

I am so very tired of hearing this word. It seems to be in every single blog and magazine. People who become farmers love talking about living “the bucolic life” and rapture on endlessly about the delight of fresh eggs and greens. Shut up! There is nothing so fabulous about rummaging around in the dirt and picking up crap covered eggs. I am not knocking people who lead this lifestyle, not at all, but I hate the way that it’s idealized with fancy vocabulary. I do enjoy gardening and fresh duck eggs, but it’s not that great. Your fingernails get dirt under them and it never comes out, bugs eat your arugula, the ducks are filthy and relieve themselves everywhere, the days are long and you’re always dirty and you’ll probably die of skin cancer in the long run. So, farm all you want if you like it, I like to garden, but stop saying bucolic and stop trying to convince me that wild animals are singing and dancing around while you savor a fresh egg. I’m not buying it.

I am very particular when it comes to underwear. I’ve never liked boxers–what are they supposed to do exactly? Why wear them if everything is still going to swing about? I’ve always preferred briefs and jockstraps–they hold everything together quite nicely. My favorite brand by far is Andrew Christian–fashionable, fun, and exceedingly comfortable. A few months ago they had a grab bag sale, so, of course I bought one. Inside was a mesh tshirt, (where am I going to wear that?) briefs and the lovely pair of boxer briefs you can see above. I sighed at them–I don’t ever wear them. So, they’ve been sitting on a shelf for a while until I finally put them on a few days ago. Did I like it at first? No. My thighs, which are not large by any means, felt like they were being cut off from my circulation. But, they stretched a bit during the day, so it wasn’t dreadful. In fact, the leg rolled up a bit which made me wonder what the point is. Why not have the freedom of movement that briefs and underwear like them offer? But, later on, as I was getting undressed that day, I took a look at my posterior. Then I looked again. Then I stopped, moved to a larger mirror and studied what I saw. Somehow, and only the sweet baby Buddha knows how, those underwear gave me an ass. I don’t have one. Yet, there it was, looking back at me alluringly. It was very dramatic, you must understand. I have been doing a new exercise regime that includes a lot of squats, but I haven’t been doing it long enough to see results like that. If I’m ever going to walk around in my underwear in front of a crowd, those will be the pair I pick, if not in my everyday wear. I took a picture, and debated posting it. I thought no, then I said, whatever. Here you go. 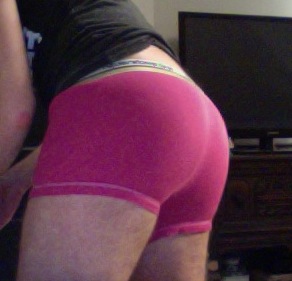 I was browsing through the latest releases on Spotify last night to find some new music to fill the sadness in my life until Beyoncé or Gaga or Britney releases some new music. I thought Justin Timberlake would help, but that new song of his is dumb. It’s starting to grow on me, but not fully. How do you dance to that? Let’s try, shall we?

Did you figure it out? I didn’t.

Anyway, as I was scrolling, I came across Kidz Bop, listened to a track to laugh, and found myself getting pissed off. First off: Kidz. Really? We already have low literacy levels and you’re going to misspell a simple word on an album for children? Second: what is with the singing? It sucks! Third: why does this exist at all? Children don’t want to hear their peers slaughtering Rihanna’s annoying “Diamonds,” they want to hear Rihanna. Avoid these albums.

I have never ever liked white chocolate. I much prefer dark chocolate. Turns out, I’ve just never had a good white chocolate. I’ve always used Ghirardelli in my baking and thought that is the way it was supposed to taste. What a shock to discover that I was wrong. I hate that. During the holidays, Whole Foods was selling big chunks of Callebaut white chocolate and I picked some up out of curiosity. Alison and I used it for the grapefruit macarons and I was astounded by the flavor. It doesn’t taste cloyingly sweet–it’s every bit as rich and delicious as dark chocolate with a hint of smokiness. That is an elegant chocolate and I shall never go back to common grocery store varieties. I hope Whole Foods will carry it throughout the year and if not, I hope they will special order it for me. It’s really a revelation to me.

I rely on Google’s image search for the images that go on many of my blog posts, so I am very frustrated by the convoluted new system that they are using. It’ll grow with me in time, perhaps, but I doubt it. I don’t like all the clicking and the pictures don’t get bigger and when you click on the results you go to the actual page that hosts the picture. No me gusto.