I don’t think I’ve ever been quite so traumatized as I was the morning of the eighth of July. Never in all my wanderings have I ever missed out on something so wonderful. I think of it constantly, this unexpected misfortune, and it fills me with anguish. This day, you see, was the fashion show for Chanel’s Haute Couture Fall/Winter 2014/2015. I didn’t know anything about it, reader, and this is a rather exceptional thing.

Last year, I was holding court with a group of sale’s associates and the manager of a Chanel shop on Michigan Avenue. It was a cozy little place full of elegant people and the manager was practically begging me to work with them because of my extensive knowledge of Chanel’s history. I oftentimes wonder why I didn’t bite on that particularly juicy worm. We were talking about Karl Lagerfeld, as you do, and she asked me if I knew that he was in Dallas for a fashion show. I nearly puked myself laughing because I take it as a point of pride that I know where Karl is at nearly any given moment. I follow his friends on Instagram and Twitter and pick up clues from their pictures. So, of course I knew where Karl was. We all had a good time laughing at how clever I am and then I bought a big bottle of cologne and took every sample in the shop back to my suite in the Drake Hotel. I’ve had a rather charmed life.

So, this morning as I was chewing on some cake, I saw this and lost my mind:

This, dear reader, is the invitation to the Grand Palais to see the show. I didn’t receive one, for some reason, but I should have known that it was going to happen. I have no idea what stopped the knowledge of this show’s imminent happening from coming to me, but I will have to assume it was for the best. When I do meet Karl, which is going to happen someday I’m sure, I’ll probably do something awfully foolish and end up in a French prison.

By the time I was made aware of the show, it was wrapping up, so I THREW MYSELF OUT THE DOOR and headed down to the Champs-Élysées to see what I could see. Never have I walked faster, never have I shoved so many people to the side, never have I ever been more upset with myself. The train felt like it took fifteen years, but finally I was out in the drizzle before the Grand Palais and had my eyes popped out of my head searching for faces. Fashion, like Egyptology, writing, and travel, is one of my passions, and so I have an encyclopedic knowledge of everybody I might see. Well, I didn’t see any of them. I missed them all. I MISSED THIS: 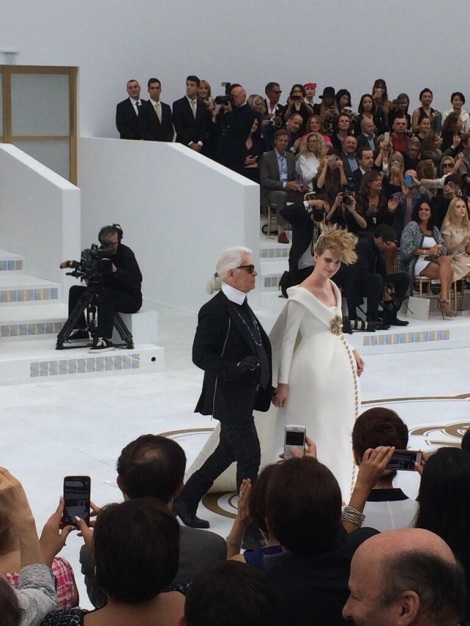 I hated life at this time. 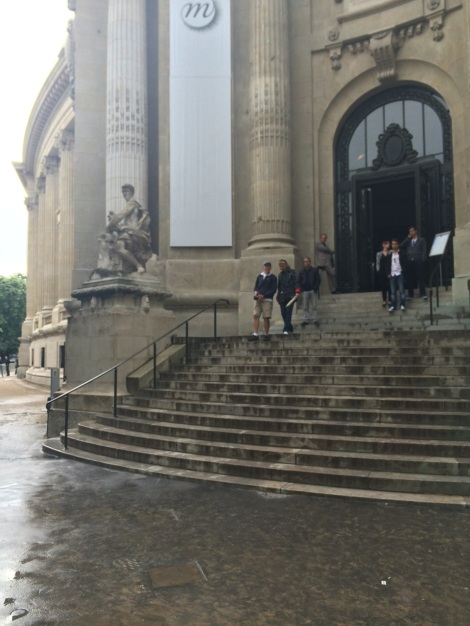 In front of the Palais, I found a group of elegant and chic young people like myself. We all cooed over my Karl Lagerfeld iPhone case, and then watched the doors in hawkish silence. The drizzle turned into a downpour, and we took cover under a tree that proved to be highly effective. We saw people come out who had clearly been to the show, but they were nobodies. A few paparazzi lingered on, soaked to the bone, so we knew that somebody had to still be inside worth waiting for.

Finally, a man with luxuriously long hair in a denim shirt and mustard pants came out and we all chased him. I don’t know who he was, but my posse had taken off, so I joined. When he had escaped into his car, my temporary friends said it was Jared Leto. I hadn’t recognized him at all with the beard and glasses, so I was a bit downtrodden as I watched the paparazzi hop onto their scooters and scoot off leaving me all alone in the rain. Here’s a picture of him from earlier in the day:

Thwarted, but still willing to fight the good fight, I snuck all around the Grand Palais and even into the delivery area out back. I didn’t get much, but I did see part of the show’s stage and the trucks that the lights were transported on.

It wasn’t much, but it was as close as I’ve been to a Chanel show…so I suppose in the end it was a triumph of sorts.

With a Parisian sigh, I hurried back down into the Métro and shuttled off to the Louvre to meet Jessica. We enjoyed a lovely nibble at the McCafé. They have new macarons — apricot and lime — that are absolutely delicious.

I’ve never thought of apricots as a flavor…mainly just a clear jelly that we pastry chefs use to make things shiny. It turns out that apricots are freaking amazing and I love everything about them.

Because we’re dangerously thin, we decided we had better eat a crêpe, too, so that we didn’t drop dead. 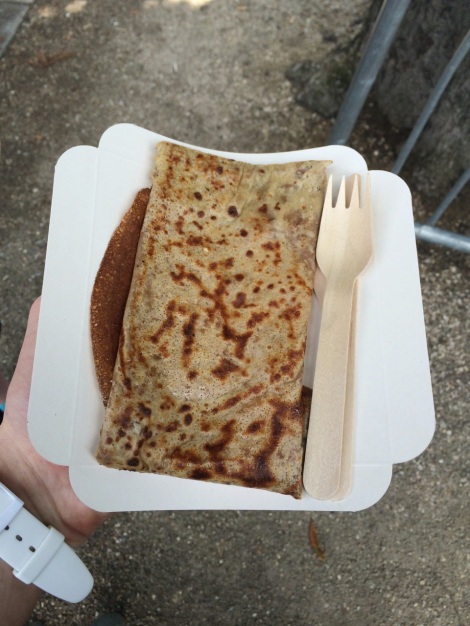 I had a fresh Emmenthal crêpe and it was flawless. Crêpes are so good when they’re made fresh, but annoyingly many street food places premake them and by the time they get to the consumer they’re very meh.

From here, sated for only a moment, we went off to Montmartre to see the cemetery there. I have a great fondness for cemeteries as you know, so I was very excited to see a new one. 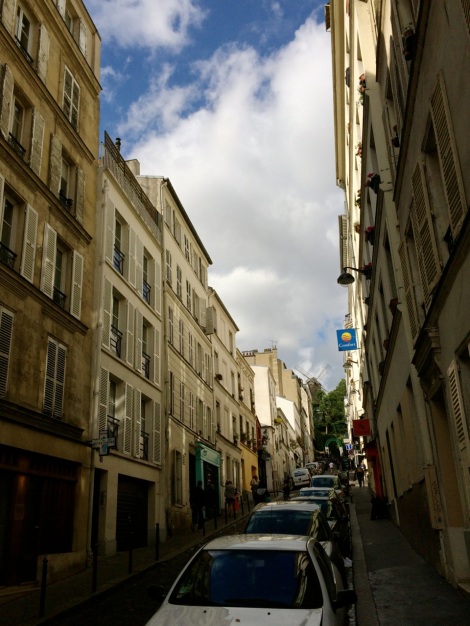 Montmartre was lovely and we found the cemetery in a matter of minutes, but actually getting inside proved to be a bit of trouble. The cemetery is surrounded by a massive stone wall and there aren’t doors anywhere. It was amusing and frustrating, but right as we were about to give up, we found the entrance.

This cemetery is much smaller than my beloved Père Lachaise, but it’s just as charming. This one feels much more alive though, as if it’s still a part of the community where people are dumping their dead. The bridge over the cemetery was rather charming I thought. It is an excellent example of how Paris is a vibrant and living city. It’s a bit like a living museum at times, true, but in places like this you see how history and the present mingle together.

There was spectacular tile work in some of the tombs. I’ve always wanted to get into mosaic making, but I don’t think I have the patience.

Jessica was delighted to find some balls.

We never did figure this one out, the person must have had a great passion for cactus hugs.

This bust is forever checking on dat ass. 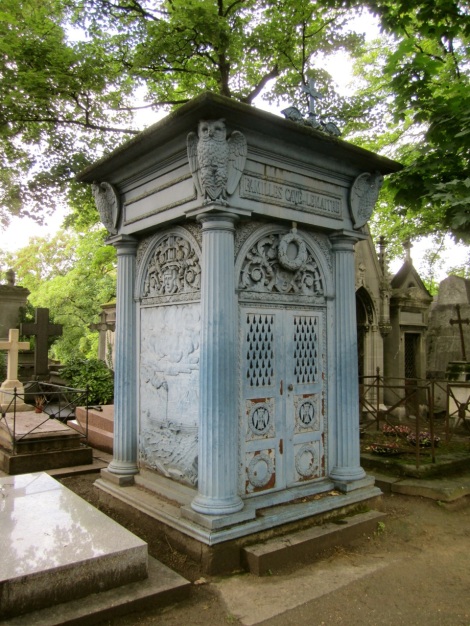 This was my second favorite tomb in the cemetery. The panels on the sides show a steamship, but on the back it clearly shows what caused the occupant’s death:

A demon shoved him into the sea! Rude.

We met this very kindly cat, which Jessica tried to befriend by imitating a cat.

The cemetery closed rather early, so to Jessica’s complete hysterical outrage, we mindlessly perused the streets of Montmartre. It’s a very hilly part of town and this failed to please my sister. 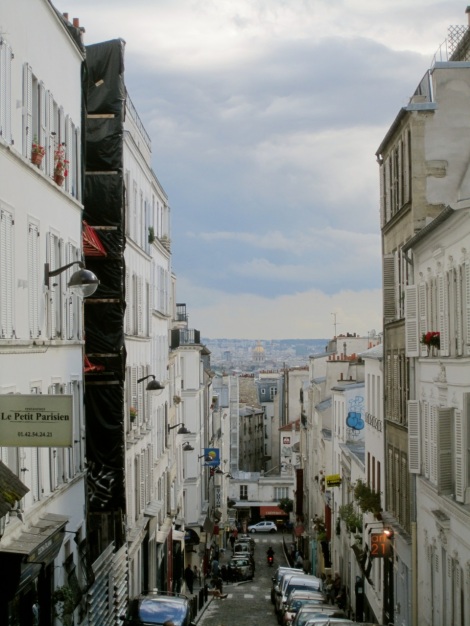 Here you can see just how unhappy she was at this good time we were having strolling through the winding streets and poking into charming little shops. Then we headed home and missed the threatening storm abrewing.

Tonight's weather in Clichy is a tad threatening.