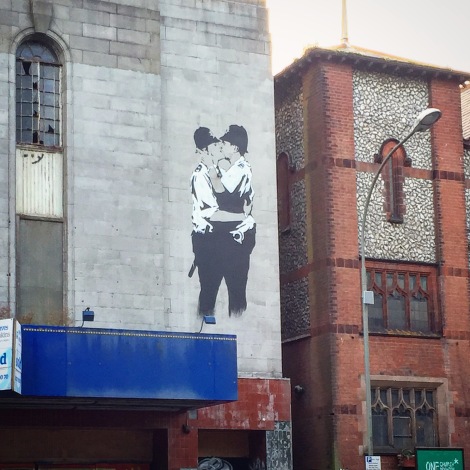 I’m feeling pretty guilty for taking forever to write these blogs. I had the bright idea before I left to pack light, to carry next to nothing with me, to be burdened by so little that I could take to the air at the onset of a slight breeze. However, that has proven to be one of my less intelligent decisions. Instead of bringing my laptop — as I always do — I decided just to bring my gigantic iPad Pro. It works fine and gets everything done that I need it to. Typing out these posts is super simple. I slap the keyboard for twenty minutes and it’s done. Editing the photos and assembling each post on an iPad alone, though, has proven to be a time consuming burden. So, the schedule of these blogs is going to be hella slow. Maybe I’ll get in the groove right now and suddenly get it all done, but I have the attention span of a goldfish, so that’s unlikely. And with that, we’re off. 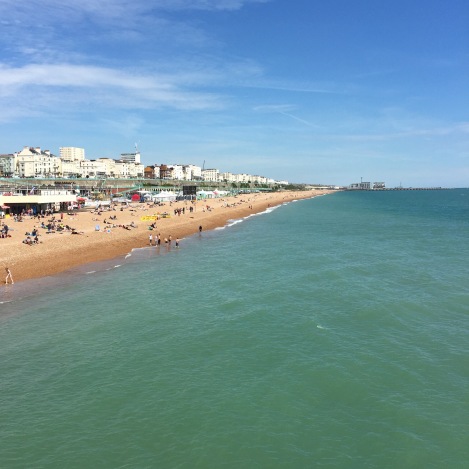 After a little less than twenty-eight thousand steps, the body is tired, and so I slept for a good long time, which was necessary after being up for the ridiculous number of hours that I was.

Jessica and I were both a bit moody that morning, she because her feet were blistered and something, but I had it worse. You see, dear reader, I had left my hairspray behind in France quite by mistake. There wasn’t any in the apartment, and I wasn’t about to bus an entire bottle for a day, so I had to make do with a shapeless mass of hair that had pieces going every which way. It was rough. I appreciate your sympathy. 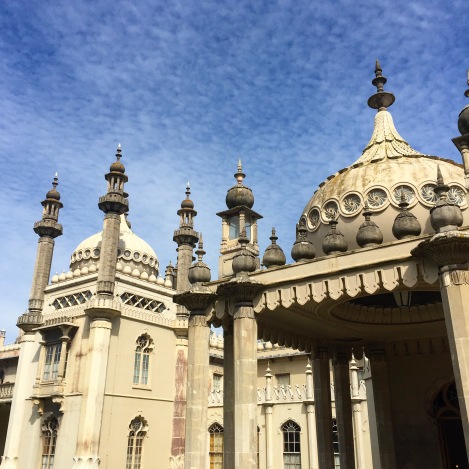 There weren’t any nibbles in the apartment for breakfast (lunch, really), so we went off to an Italian place called Zizzi. I’d been to another location years ago in London after watching the Royal Wedding. Well, I didn’t watch the actual wedding, but I did see the parade and marched in the throng to the gates of Buckingham Palace to see the entire royal crew out on the balcony. That was a fun day. My enthusiasm for Zizzi was pretty high because they have a house Prosecco with different syrups that you can mix into it. I ordered passion fruit because I’m obsessed with the stuff. They serve it to you with a sprig of rosemary to use as a stirring stick. Elegant. I guzzled the stuff. The food was all right, nothing extraordinary. I’ve been saying that a lot lately, so I’ve probably become even more pretentious. Sorry. 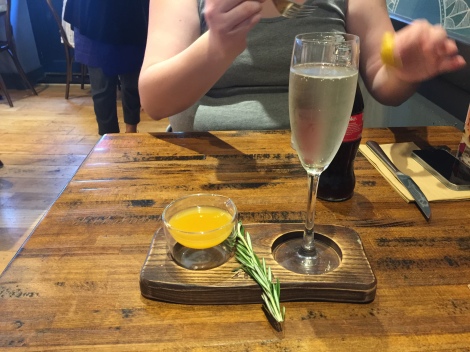 After two courses and coffee, we grabbed some gelato and hit the beach…BEACH LET’S GO GET AWAY. That happens every time I say beach in my head, thought you should experience it for yourself. You should have been with me in Nice last summer, I sang that damn song all day long since I lived literally on the beach. Good times that. (We’ll discuss the events in Nice in a future post.) My gelato was actually exceptional. It was passion fruit, of course, but it was mixed with fresh mint. Reader! That is a revelation. What a good combination. I happily ate it until there was nothing left but a napkin. I was blessed. And I was on the beach, so it was a good afternoon. 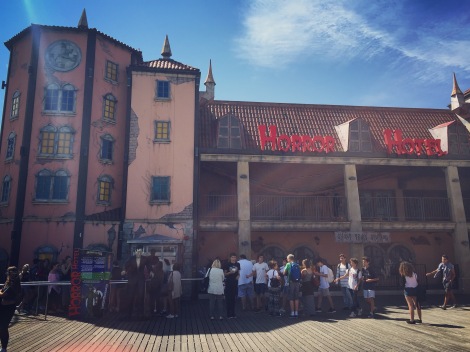 The day took a turn for the better after we got up and went onto the pier. Ever since my last visit, I’ve wanted to go on to the Horror Hotel ride. It reminds me of an episode of Keeping Up Appearances when Hyacinth and Richard escort a group of senior citizens to the sea. I am very much like Hyacinth, I feel, and I wanted to recreate the moment.

£4 later, we each had a ticket and were waiting in line. IT WAS FABULOUSLY BAD. Reader, I’ve literally never shrieked more with laughter than I did on the forty-five seconds I was on the ride. It appears to have been built in the mid 80s and never updated. Horribly bad animatronics pop up, sheets wave, you’re tickled by yarn, there’s a glow-in-the-dark spider. I was having the time of my life, and was really quite sad when it was over, but there was more to see and be done: I had a baked potato to eat!

When we were here a couple years back, we suspiciously looked in on a fast food restaurant that served nothing but baked potatoes. Neither of us could muster the courage back then to order a potato covered in baked beans, but the thought of the place has haunted me ever since. I had to have one. I had to have one of these potatoes. 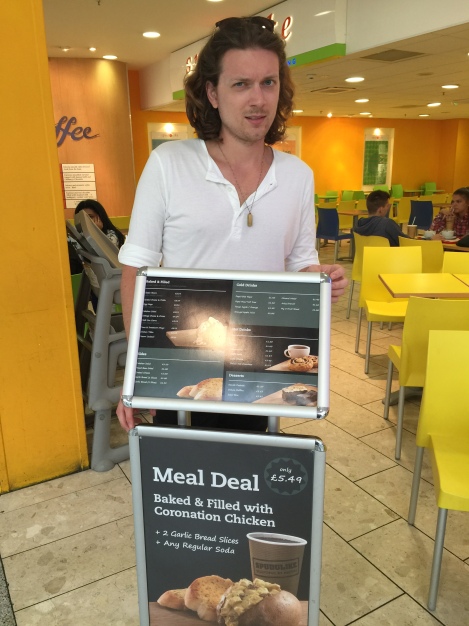 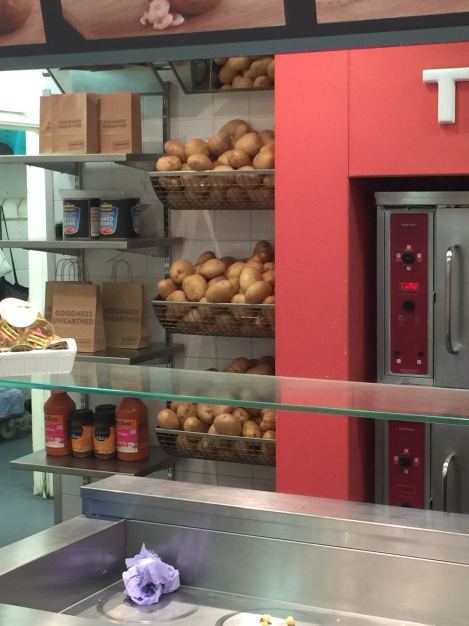 So I daringly ordered one covered in chives and cottage cheese. I was repulsed and fascinated. Enchanted, I watched as the waitress split one of the mammoth potatoes in half and shoveled cottage cheese inside. I don’t think I’ve ever seen so many perfect potatoes. They had to have been genetically modified or enchanted or something. They were perfectly cooked, too. I was suspicious of the whole thing, but it was utterly delicious. 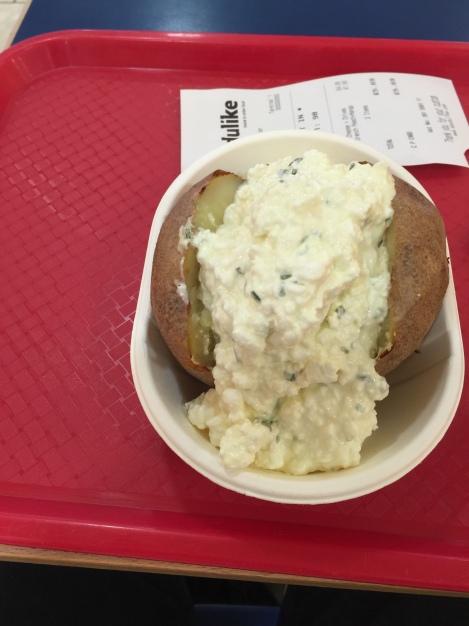 Waddling, we carried on.

I’ve been feeling very old on this trip. I’m not sure why. I joke about it at home, but I don’t feel that way. Here, I have felt like I’m at least ninety. I think it’s because I don’t have coconut oil slathered on my skin or in my hair. Coconut oil does a world of wonder, readers. So, we went over to LUSH to by shampoo bars and facial masks so that I could feel young and fresh and new again. I was very adamant that my mask had to be green for some reason. I don’t recall my reasoning, but I found a green one, and inordinately happy, I returned to the apartment to get ready for the night: we were seeing Absolutely Fabulous again. 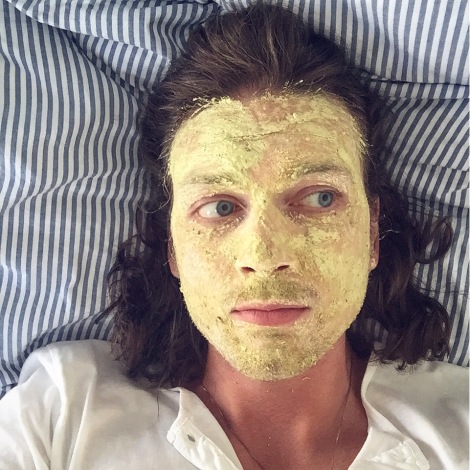 The mask made me look terrifying, and then shockingly gorgeous. The new shirt I bought at Zara gave me the air of an Argentine pop god. I was living my best life. Jessica wasn’t quite so much, because we had a hearty walk to go to the Duke of York Picture House. It is allegedly one of the best theaters in England, and after seeing it, I think Jessica would readily admit that the trek was well worth it. The theater is shockingly gorgeous, with red velvet everywhere, comfortable plush seats that were from the days when Bette Davis and Joan Crawford would have been on the screen. The concessions was insane — they served me champagne in a glass flute. I literally was near to weeping. I know that it was there just because of the Absolutely Fabulous movie and its reputation for manic champagne consumption, but it was so special. This is the way that I wanted to see the movie. It was wonderful the night before, but this was exactly right. 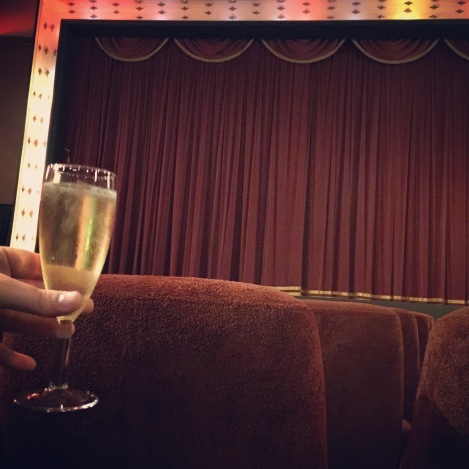 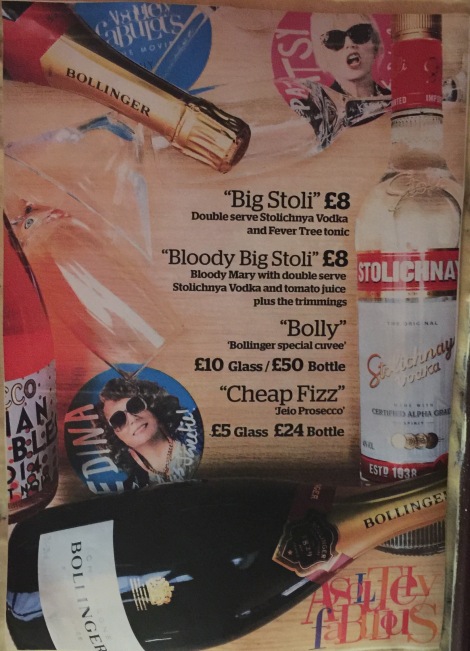 The theater was stuffed to bursting with people who laughed at every joke, every nuance on Joanna Lumley’s face, every nonsensical plot development, at everything. They were fabulous. We were fabulous. The movie was fabulous. It was all just…fabulous. It is such a special thing to be in a theater full of people who really admire what they’re watching. It reminded me of the New Beverly Cinema in Los Angeles where film aficionados come to see the classics and the obscure. The atmosphere was positively electric with cheer, and we nearly floated back to the apartment. (After I infuriated Jessica by stopping for some French fries.)
—
We had nothing left to accomplish the next day, so we leisurely readied the apartment, Jessica had to pack an extra bag because of all the books and gels she had acquired over the last forty-eight hours, and we set off for lunch. The Bright Helm is always all right, and I think gin is always a nice idea, so we had a loverly time. Speaking of time, it was running short, so I scurried back to the apartment for our bags and met Jessica at the station where she was in the midst of a panic attack. She needs to chill somehow. Someday she will, I hope. She’s a bit like my cat, Clea, always on the edge of screaming or crying. My mother gave her lavender drops in her water the other day and I guess she’s a changed animal. I’m somewhat concerned. What if those bits of lavender altered her totally and she’s not the same darling creature she once was?

The trip into London was somewhat annoying. We were sat beside an Italian man and a teacher who discussed Brexit in the broadest ways for the entire hour. Surrounding us were elementary school children who had been to the sea for a day trip. It was chaos. And London was chaos. That city is simply too much for me, I think. 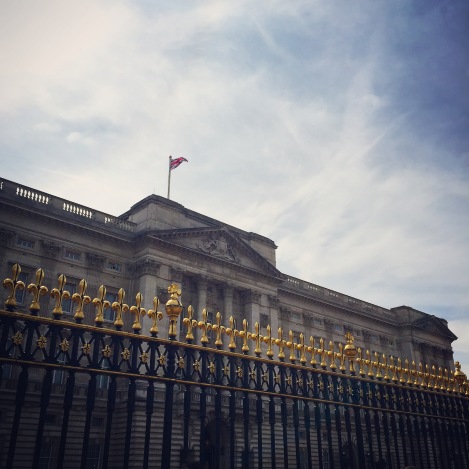 After popping round Buckingham Palace we made our way to the station, and then soon we were whizzing beneath the sea. It wasn’t long until we were back in Paris. On the platform, I felt myself relax tremendously. It was the strangest thing. I didn’t realize how tense I’d been in England, but it must have been the case. Paris it seems is really home.

4 responses to “BRIGHTON: Still By The Sea”