Looking back, I was not very successful at my goal of seeing a lot of new places in Paris on this trip. Jessica and I just settled in and acted as if we lived there our entire lives, which, in our heads, we have. So, it wasn’t a big deal to go see a new museful or a bakery on the other side of town. Speaking of bakeries, my opinion on a lot of them has changed so much. I used to be that pretentious person that would happily schlep across town for a baguette because it was supposed to be “the best.” It rarely was. Even as recently as two years ago, I would take an extensive Métro journey to Miss Manon bakery for a poppy seed baguette.

That isn’t so important to me anymore. I just liked the tradition and ritual of getting that particular loaf of bread. It isn’t that extraordinarily different from anywhere else, and I found, to my great satisfaction, that the bakery two minutes away makes excellent bread. So, I used them. That’s what locals do. Bread is a necessity in France; it isn’t a holy thing the way I used to regard it. It’s a daily staple, and it’s not glamorous, you just go to your local boulangerie and figure out what you like. For me, it’s a well cooked baguette de tradition. It’s always great, especially slathered with goat cheese…or by itself…or as a sandwich vehicle…or dunked in soup…or anyway. It’s always divine. This is just one example, I suppose, of settling in. I didn’t need to peek into a new chutch every other day or see a fountain in some far off corner of town. Maybe that’s because I have done it all already? I’ve seen an awful lot of Paris, after all. Still, there are certain staples in Paris that I’ve never even thought about, like the Petit Palais, so I determined it was a place I should drag Jessica to.

I thought she was dead for a good long time. She slept until nearly two o’clock in the afternoon, which, somewhat surprisingly, is hardly a record for this trip. Jessica made no attempt to readjust her internal clock to Paris time. She would stay up all night and sleep in all morning like an irresponsible teenager. Finally, though, she emerged from her bedroom, quite alive, and very very very mean. She wasn’t pleasant at all and complained of feeling poorly, which is something I can easily understand. Still, she was not receptive to any of my methods of curing her. She refused a hot toddy. She didn’t want one of my cough drops. The only thing she would accept was a cold, unopened bottle of wine to apply to her skin in an attempt to cool down.

This apparently worked, because after a good long while, we were finally whizzing under Paris to the Champs-Elysées.

Entrance to the Petit Palais is blissfully free, which is unusual in Paris. Actually, if you’re under twenty-six years old, you can get into a lot of the museums for free. But, now that I’m an old man, everything costs money. I don’t like that. I have less money now than I did when I was younger. Thanks a lot, multiple sclerosis and cars and the rising costs of living. Ugh. I complain too much. 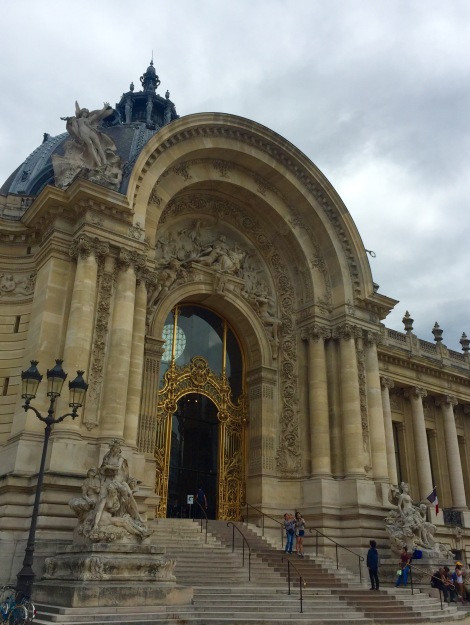 Well, the Petit Palais was gorgeous and hardly crowded at all. So, if you’re in Paris ever and you don’t want to combat tour buses or blow your budget on a ticket to a palace with no air conditioning and hordes of sweaty, angry tourists, give this place a try. I really thought the paintings were exceptionally nice. The architecture was excellent, the statuary was beautiful, and the atmosphere was lovely. I had a grand time, but we didn’t stay long since Jessica continued to be ill or something, and there’s probably half of it left to see someday in the future. 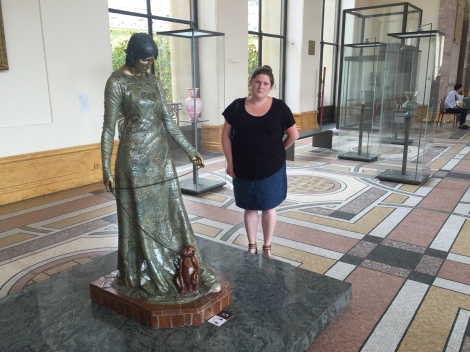 She was beyond ecstatic to be out and about and posing for pictures.

“Me and my ladies sip my D’Usée cup.” –Beyoncé 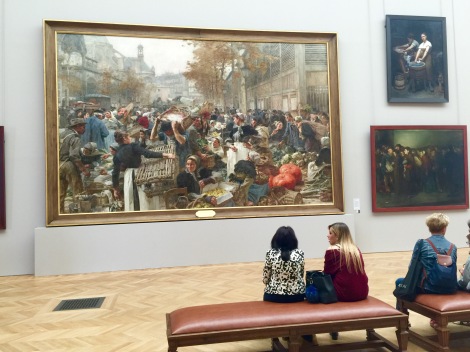 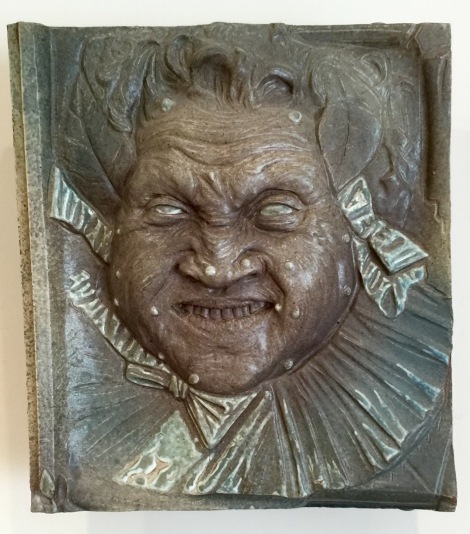 Actual photo of Jessica in her Louvre pass. 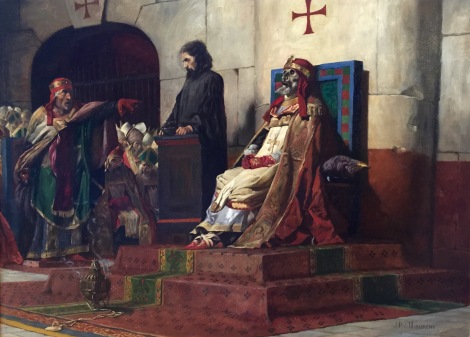 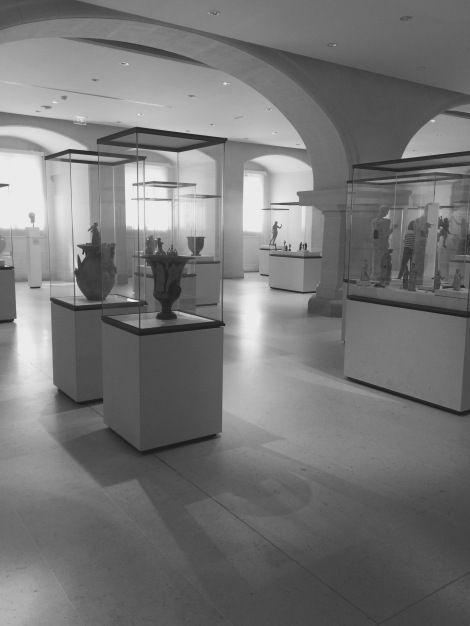 To soothe our throats, we hurried into a Pierre Hermé shop to buy ice cream. He’s been churning out little cups for a couple years now inspired by his fabulous macaron favors. I had the Mogador and Jessica had a lemon. They were both fabulous, and spending an hour in the Tuilleries, slurping on quality ice cream is a dream. 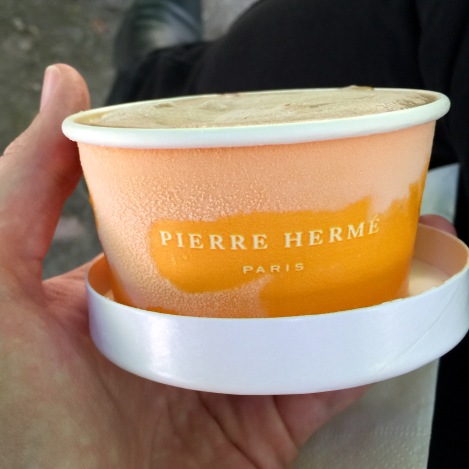 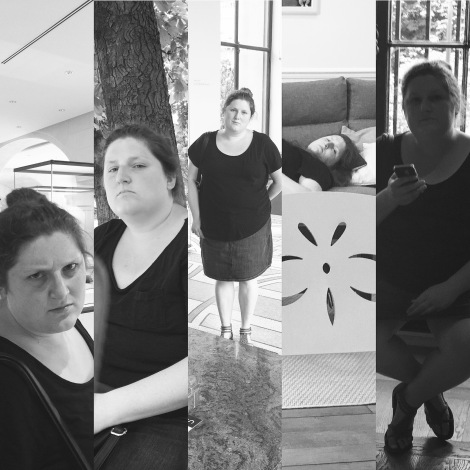 Jessica’s various moods throughout the day.

On our way out of the park, Jessica shocked me. In fact, I still can’t quite get over it. 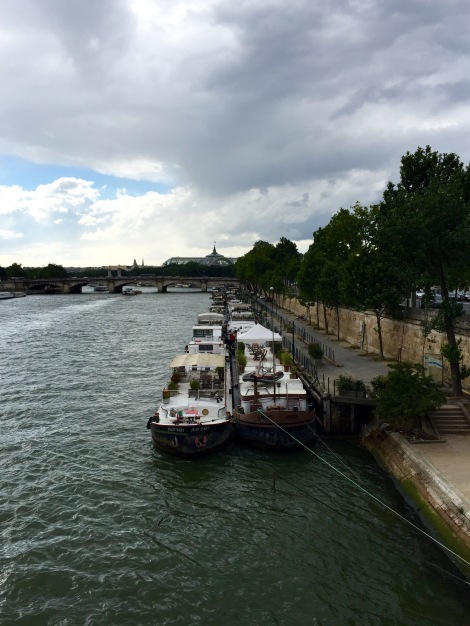 We were standing by the Seine, just admiring the water and the shade when she caught sight of the Eiffel Tower. “You mean,” she said, her voice wavering slightly, “we could just…walk there?”

I fell to the ground.

I clutched my chest.

Ambulances and rescue services hurried to my aid, and when I told them that Jessica Ann Phillips just decided to go on a walk across Paris of her own free will, they followed suit. Soon, there was nothing but a hyperbolic pile of bodies on the ground. Jessica does not walk anywhere. This is nothing that ever happens, nothing that I thought she would ever even maybe want to do, and yet, there she was, somewhat ill and willing to cross town by foot. I’m still in shock, dear reader. 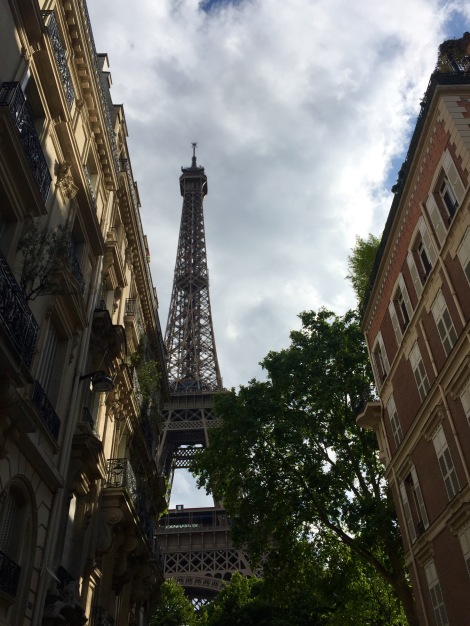 So, we set off. It was a lovely walk and we were soon at Iolanda’s for dinner. She didn’t die. I’m fairly sure she shocked herself.

Daring to continue seeing new sites, the next day was another great achievement. We saw a new cemetery and ate somewhere new! It was probably our most expensive meal of the trip, and in a food court! I can’t remember why we decided to have lunch in the Louvre, but it wasn’t a bad idea. I had fries and a bowl of tabbouleh and it was hella overpriced, but it was really quite good and I have no regrets.

It was hella hot in there, though, because as I mentioned above, the air conditioning is limited and there are so many people. Tourist season in Paris is something that needs to be seen to be believed, but I can’t say that I really suggest it. Paris is so much nicer when it’s a bit cooler and everybody has gone back to their homes. Springtime in Paris is enviable. Go for that if you’re planning a trip. 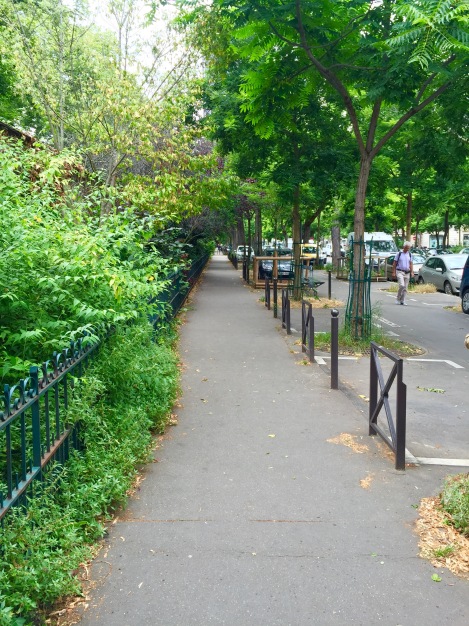 After lunch we headed out for the Cimetière Montparnasse, which is the second biggest cemetery in town, and one that I had managed to never visit. Can’t really tell you why. I’m just so in love with Père Lachaise that I always end up there. You could never get bored or be done with that perfect graveyard. I love it dearly. But, the cemetery in Montparnasse was actually lovely. It felt better organized and tidier, but that does get rid of some of the charms that Père Lachaise is known for. It’s a particular delight because in two seconds, you can be sequestered away from the rest of humanity and wailing about your dead cat. Not that I would know this because I have done it innumerable times, but such a feat is not quite so simple to accomplish at the Montparnasse Cemetery.

Luckily, though, when it rains, it’s still perfectly possible to hide in a tomb and wait for the water to stop falling from the heavens. Jessica and I found a number of quite comfortable sepulchers to while away some time. The dead can be so thoughtful. 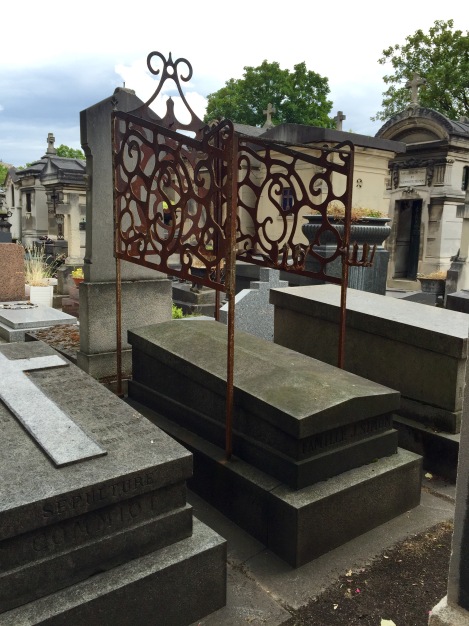 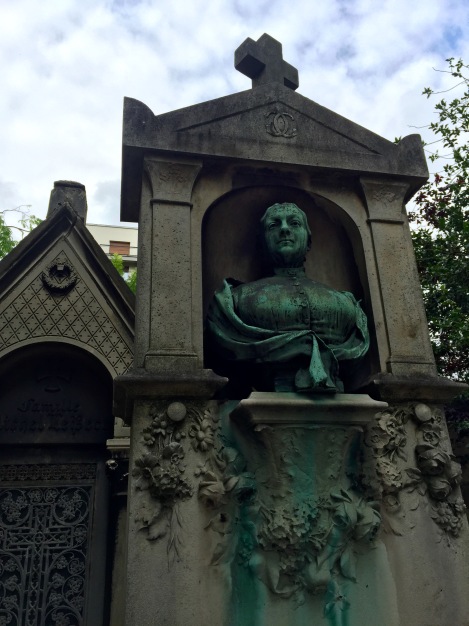 I love a bust. 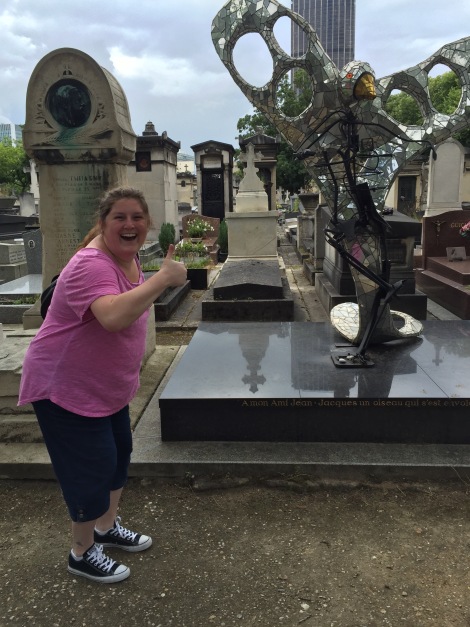 This one featured a bird, so Jessica was quite taken. 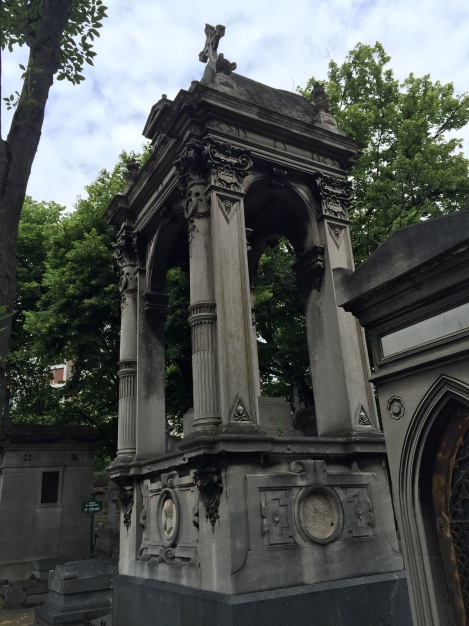 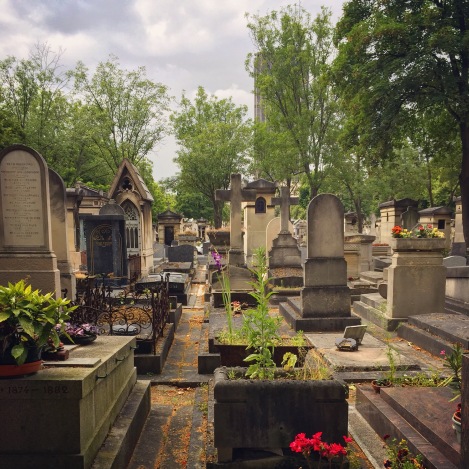 Quite a gorgeous place. Much less crowded, too. 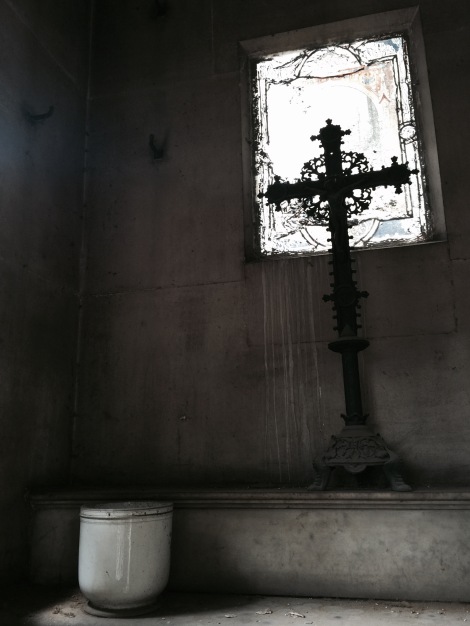 In a moment that will forever be emblazoned in our memories, we none-too-subtly watched a man take a crowbar to a tomb and methodically slide the stone slab off the top just enough to permit him to enter. He apparently went down some steps, for his head vanished as if he were doing a miming act. Jessica and I were entranced by this. I have always wanted to go into one and see what there is to see. He was only there a few minutes and then was back out, prompting our quick, even less subtle exit from the area. I assume he worked for the cemetery, but I really don’t know. He wasn’t wearing any form of identification, nor did he appear to be doing anything. He didn’t have any tools on him, and he wasn’t down there long enough to accomplish anything. Maybe this was one of those fake tombs that are the secret to the catacombs. I am always hearing rumors of those and I hope to find one someday. If you know where to go, hit me up, readers!

After a stroll all around the cemetery, we decided to swing by the Louvre for their extended hours before heading back to Clichy to do battle with grocery store self check out machines, and then to relax. That night, the world was a rough place, but everything was still all right. I mean, look at the way the sun makes Paris glow. 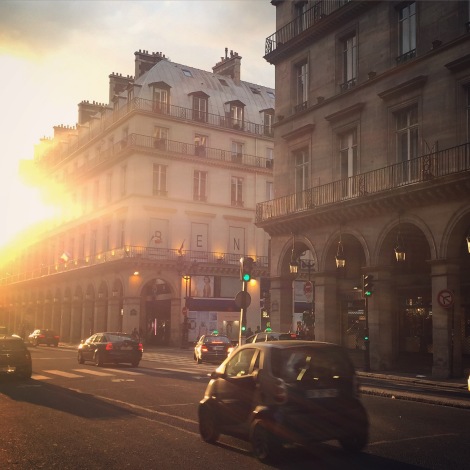 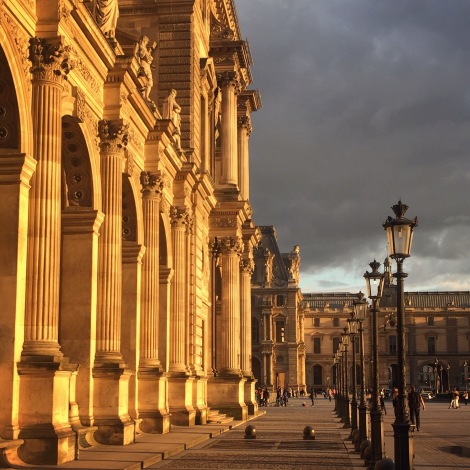 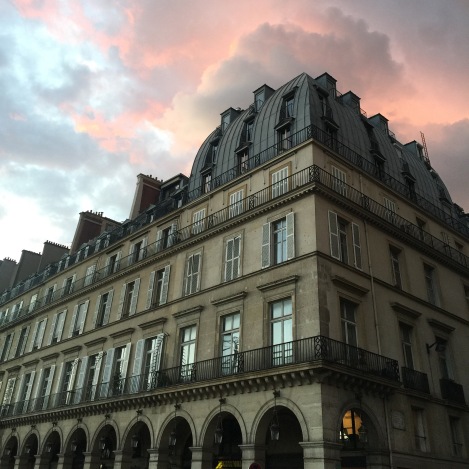 How I wish that every night could be so blissful, that every day could be this safe, that we could all simply enjoy being alive. The next day was Bastille Day and our psychic senses were, unfortunately, all too rightly tingling. But more on that later.