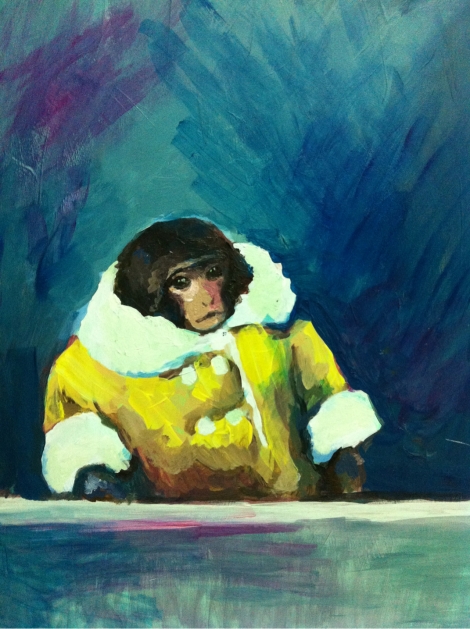 Gahhhhhhh! Darwin, I love you! The IKEA monkey is the greatest story of all time. You’ve seen the reports, you’ve laughed at the memes, you’ve wondered how you’d dress up your pet monkey–but I don’t know if you love the story as much as me. I want there to be a movie about Darwin. I want there to be a statue of Darwin in every IKEA around the world. I hope that his owner writes the story of his furry little life. I hope he becomes the face of a line of pet clothing. I hope he’s prominently featured in next year’s IKEA catalog. I hope he goes back to his owner. I hope he stars in a commercial. I hope that I meet him. I want his autograph! He just looked so very tragic in his little coat. He’s more deserving of fame than most celebrities. Je t’aime, Darwin!

I am obsessed with the rumors I keep hearing about Anna Wintour becoming the American ambassador to France. Could anything ever be more fabulous? Anna Wintour! She’s smart and trendy and an icon. I can’t really put into words why I find this prospect so amazing. Probably because I’m a fashionista bitch. It’s like if Karl suddenly became a senator or something. I just think that it’s a marvelous idea and I hope it’s true. 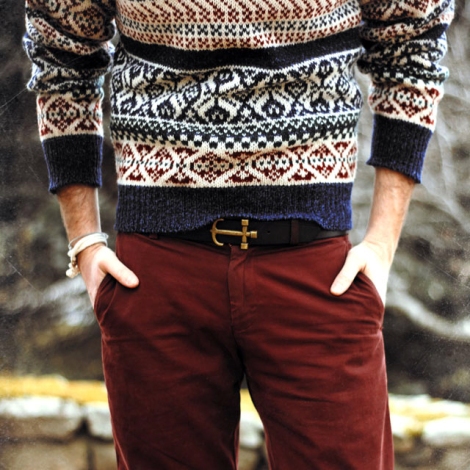 Much like color blocking, this is a trend that I will never ever let die. Honestly, the nautical look has always been in style, but I’m obsessed with its recent resurgence. When I went to the Royal Wedding a couple years ago, (*brushes shoulders off, keeps on moving*) I thought I was the very height of fashion in my striped shirt from American Eagle, and I was. I was delighted, though, to find in Europe an endless variety of stripes and anchors and other bits and bobs that referenced the sea and those who sail upon her. Last month in Paris, I bought the most gorgeous red and cream striped sweater at the Monoprix. It’s my favorite of my nautical wear. I put an anchor belt buckle on my Christmas list (see example above). I do hope I get it. It would look stunning with that shirt and my navy pants. Good Lord, I’d do me if I were dressed like that.

Normally, I am completely against things that try to take advantage of the past. I live in the past in my mind, so this does not make much sense. I never do, so why should I start now? In the newest commercial for Dior’s J’adore fragrance, Charlize Theron rushes to the Palais de Versailles to prep herself for a very fancy fashion show in the Hall of Mirrors. Yes, please! Can you imagine walking in there? I’d die. I’d just die. I’ve walked in the Hall of Mirrors, but I’ve never walked in the Hall of Mirrors. Next time I go to France that’s going on the to-do list. Anyway, as she is getting ready to go on, she comes across dead celebrities, who in the commercial are very much alive. Alarmingly alive. I don’t know what kind of wizardry was put to use, but I completely believed that she was embracing Grace Kelly, glancing at Marilyn Monroe, and walking past Marlene Dietrich. I’m truly in awe of the special effects used. I’m assuming they used old footage that they colorized and superimposed over an actor. I really don’t know. All that I know was that Marlene’s hair was absolutely breathtaking and I approve of whatever they did. Can we bring Joan Crawford back now? Please?

I love singing so much! I’ve not got much voice, but whenever I get the chance, I’m humming a melody or singing a song. I hum the theme to Super Mario often. I don’t have a clue why. I don’t play video games. I sing the Spanish song in Napoleon Dynamite a lot, too. When I’m on the treadmill, I transform into Beyoncé or Judy Garland or Zayn from One Direction or Britney or Gaga or anybody. It makes walking and running so much more fun when you’re imagining yourself to be Madonna at the Super Bowl. What? You don’t do this? Give it a try. Such fun.

I’ve always hated guns. It’s just the way I am. I have no desire to possess a gun. I have no desire to shoot a gun. I have to desire to die in a gunfight. I don’t even approve of a good old-fashioned duel with pistols. Wouldn’t it be more gentlemanly to use knives? I don’t approve of violence of any kind, so I suppose I don’t even approve of that. If you have an issue with somebody, talk to them. Seek advice from somebody wiser than you. And if all else fails, punch them in their ugly nose. (Hopefully you’ll break it and they’ll have to get a rhinoplasty and no longer have an ugly nose. See? Silver lining.) So, this recent school shooting has disgusted me, saddened me, annoyed me, and really just pissed me off. Why are assault rifles being sold at Walmart? Yes, Walmart. Where we buy our grapefruits and shampoo. Why are there lunatics shooting people in schools and malls and theaters? It’s nonsensical that people have to live in fear of being slaughtered in 2012. Things like this should not be happening. I don’t know what the solution is. I don’t think anybody really does right now. Something needs to change in our country, though. We, I’m generalizing now, forgive me, have a love of violence and glorify weaponry. You see it everywhere. It’s vulgar and crude. Guns themselves might not be the problem, but at this point, it’s beside the point. Guns are slaughtering innocent people. I’m not saying that they need to be taken away, but there needs to be some kind of deep regulations taking place. What they would be, again, I haven’t a clue. People like to hunt. I get that. (Even though, really, I don’t.) I do get the need for controlling animal populations, though, so, so I guess I approve of guns used for hunting. But what’s going to stop people from shooting other people? Nothing. That’s a problem. I was in an argument this week with a student who thinks that all people should be armed at all times. I couldn’t make her understand how ridiculous this was. People have emotions. They become angry or spiteful and filled with rage. Say you get pissed at somebody and you just happen to be holding a pistol–what do you think is going to happen? Don’t even try to argue with me saying that not everybody would do this. Of course not, but somebody will. There are many, many unstable people in our society who are ignored and are not getting the therapy and treatments they need. We need to help people more. We need to have a more loving society. We don’t need to arm ourselves against armed people. You see how ridiculous that is, don’t you? Remember Hammurabi’s code? An eye for an eye. And remember what Ghandi said? An eye for an eye makes the whole world blind. We can’t just have guns for fear of other people having guns. I’m exhausted by this. I worry for the senators and representatives that will have to deal with this issue. It’s a veritable Pandora’s Box.

I always thought that I hated pepper. Turns out, I don’t, I actually love it. What I hate is the powdery stuff that sit on tabletops around the world. That stuff is vile. Fresh cracked pepper is divine. It has so much more flavor and intensity and texture. I just love it. There is a restaurant in Des Moines that makes vegetarian version of steak au poivre with a portobello mushroom instead of a chopped up dead animal. It’s covered in smashed peppercorns and it’s beyond delicious. I highly recommend you giving up your pepper shaker for a pepper grinder.

I really haven’t the foggiest notion as to why, but I loathe this word. When people use it in conversation, I wince ,and when I read it in a message or a text, I roll my eyes. I’m not sure why it offends me, as I said, just please don’t say it near my ears or write it near my eyes. Thank you.

I’m sitting at home right now. We didn’t have work today because we’re in the middle of a blizzard. I don’t mind being at home. But, I do mind the blizzard. The snow is harsh and cold and totally not working for my Seasonal Affective Disorder. The only bright side to it is that it’s so reflective that it looks really sunny outside. A true bright side, that! I don’t know what’s going to happen tomorrow. It’s still blowing like mad. I hate how cold it is. I hate how it drifts. I hate how it seeps into your shoes. I hate that it melts in patches. I hate that it lingers. I hate that it freezes into ice. I hate that my kittens are shivering. I hate that I have to look at it. I just hate it. The only time I enjoy it is when I’m watching it fall down. I don’t know why, it’s beautiful as it drifts down, but the moment it makes contact with the ground–I’m done with it. Is it springtime, yet?

I think I’ve posted this hate before, but I think about it all the time. I don’t understand why we don’t have it. The technology exists and has been proven to work. Tesla did it decades and decades ago. And yet, I still have to worry about where I put my television because of where the outlets were idiotically placed by electricians in the 40s and I have to worry about my laptop dying while I type away because its battery is nearly at the end of its life. I should be able to hang my television on any wall and carry my laptop anywhere with me within range of the electrical transmitter. It’s so illogical to me that this isn’t happening. What company stopped it? I’m assuming it has something to do with money. It always does. A guy who lived up the road from me invented one of the first hydrogen batteries and turned it into a hydrogen powered car. He was a genius. I only wish that I could have been his assistant or his something, but the timing just wasn’t right–he’s dead now. I don’t know if he wrote down how he did his experiments or if he told his children. I don’t think he patented anything. I remember being told that a company bought some of his inventions and then never used them. Maddening, that. Anyway, I’ve always been obsessed with advancements in electricity and I’m just stunned that I have to worry about plugs in the wall–they are so not chic.