I have been trying to watch a bit more television lately. It’s the television renaissance after all. I’ve even heard some people call it a golden age. I believe this to be true. We have so many grand and cinematic shows on cable. And Netflix has been doing a remarkable job at creating really funny shows like Unbreakable Kimmy Schmidt and when they brought back Arrested Development. One of my favorite shows is off Showtime called Penny Dreadful. I know that I wrote about it before when it first came out, but that was a year ago! This show is a confection for lovers of Victorian gothic literature like me. It brings together Frankenstein and his monster, Dracula, Dorian Gray, and all sorts of ghouls and creeps from different legends. This could come off painfully (as it did in the later Universal horror films), but in Penny Dreadful, all the characters are unique, yet familiar; their stories are delicately and well thought out, and the attention to detail in the design of the show is spectacular. I fall in love with each new episode that I watch. I would watch it with the sound off if I had to just to admire the costumes and the sets. Such a beautiful show! The premiere has been posted to YouTube a few weeks before it is set to debut and I loved it. I knew I would. When I watch, I’m taken back to my bedroom in Clichy (a suburb of Paris) where my sister and I spent many rainy days last summer during our European excursion. Do tune in, reader, or do that thing I used to do where you watch it on some stream somewhere. I don’t know how to do that anymore, the Internet has gotten so hard.

This is a bottle of lies.

I spent…like…fifteen hours in a bus the other day going to and from Chicago on a day-trip with my best friend. It was more than a day, but I don’t know of a better term. We had a great time, but sleeping on a bus is not so fabulous. It’s worse than sleeping on a plane. I can’t complain about the trains, I find the seats on Amtrak to recline quite comfortably. Anyway, I tossed and I turned and I wrapped scarves around my eyes and I unlaced my shoes and I shifted and I shuffled and I was never able to get comfortable. I never even dozed. We stopped at a gas station for a break and I bought a bottle of Neuro Water that is supposed to help you go to sleep. I had memories of Paris Hilton posting a picture of the stuff to her Instagram. If it’s good enough for Paris to promote, then it is good enough for me. MANDATORY PARIS HILTON INTERLUDE:

In honor of the memory of Tinkerbell & to try & smile in a sad time, here is the #SanaSaSong 🎶👯🐺🎶 #TheSimpleLife #SillyAndBilly

So I bought it. I drank it. I wasn’t convinced. I didn’t feel drowsy, but then I passed out and woke up hours later in Chicago feeling oddly refreshed. I was suspicious. On the way back, I bought another one to see if the same thing would happen, and it did. I can’t be sure if that’s because of the melatonin-laced water or the fact that I had spent all day stomping up and down Michigan Avenue. I’m curious. I’d like to do some more studies of this because if it can help me sleep, I’m all for it. (SEND ME FREE BOTTLES, NEURO!) Sleep is one of the things I’m not good at. I’ll get maybe four hours a night and then I’ll take a nap when I get home from work. I don’t get how a person sleeps for eight hours at one time. I don’t think I’ve ever done that. I’ve slept for absurdly long periods of time and very short periods, but never anything normal. Will this Neuro Water make me into a real person?

I adore Amazon. I’ve used it since I was in elementary school and my grandfather would buy me Indiana Jones novels and Egyptological publications. I still want to be Indiana Jones, but with better fitting pants. I do the vast majority of my shopping online using the web giant, and I have always been quite satisfied. Maybe I’m lucky in that respect, but I have never had the need to return anything. UNTIL NOW. My printer died a few months ago and I finally got around to replacing it. I am fairly sure that Satan designs printers himself in the bowels of hell and then watches us struggle with them as he giggles. Why doesn’t Apple design one? They’d work at least. I’m absolutely fed up with the regular inkjet printers. The ink costs more per ounce than Chanel No. 5! I bought a laser printer this time, which is something I’ve wanted for years. I do mainly black and white printing anyway of travel tickets to nice places and manuscript drafts. The one I picked out was beautiful, but it was horrible. It took ages to connect to my wireless network and then when it was connected, it refused to respond. I managed to print off four pages in the hours I spent fighting it. I was not going to live like that so I decided to send it back. Never have I ever experienced something so simple, reader. I clicked a few buttons and then I received an email saying my return was ready to go. UPS showed up a couple days later and a very nice man slapped a new label on the box and took it away with a smile. I was absolutely charmed. A different printer is on its way now, along with a new book on Egyptian hotels. I can’t resist. Amazon gets all my money.

I have been watching this show since the second season. It’s an institution in my personality, and I truly can’t get enough. Let’s be honest, reader, there is nothing more delightful than sassy drag queens shading each other for forty-five minutes. It’s everything. This latest season has been slow to pique my interest, which is unusual, but now that we are about halfway through the competition, I’m finally in it. I’m team Ginger Minj and Katya. There aren’t many gigantic personalities like there have been in the past, but that doesn’t make the show any less delightful. How can you go wrong? The show is so camp and so fun. If you’ve never tuned in, you are doing yourself a true disservice. There is something so heartwarming about drag. They are absolute bitches to each other, there is no denying that, but deep down, under layers of makeup and latex and feathers, they are the sweetest people. It shines through on every episode and the credits never roll without a smile on my face. I love it. 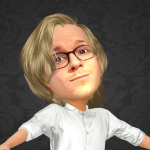 I’ve been screaming with laughter for the past hour. Literally, reader, there were tears streaming down my face. I might just be overtired, but I don’t think so. This afternoon while reading Buzzfeed during lunch, I saw an article about a Chinese app that will turn your face into a cartoon. “Gross,” I thought, “another bitstrip.” I was amused, though, so I downloaded the app and then finally had a chance to mess with it late last night. I didn’t know what to expect, but I certainly did not expect to see what I saw. By some magic, my face was turned into an accurate caricature that I dressed up in clothes that were incredibly similar to my own attire. I changed the hair, though, as you can see, because I have long had a desire to be hot blonde. I will do it. I’ve done it before, but I will do it again. My cartoon character has convinced me that I can pull the look off. The entirety of the app is in Chinese, so I didn’t have a clue what I was doing half the time, but that was the main fun. You just keep clicking things and magic happens. Then, all of a sudden, my little cartoon was on a stripper pole and working hard for the money. At that point, I lost my shit. It was too good. I had to force myself to put the phone down and go to sleep, but I still snorted with laughter at the thought of my character singing opera and gnawing on cucumbers and doing ridiculous dances.

Still not over this. [I'm into me as a blonde, that might be happening.]

It’s amazing. Search MyIdol on the App store, and prepare for the best damn day of your life.