Everybody is influenced by a rather odd and eclectic grouping of events and chunks of knowledge that makes them who they are. Like I said a few posts ago, I have been inspired by my grandmother’s life. And as I have said a million times, I have been endlessly impacted by Joanna Lumley. Another woman who has had a lasting influence on me is Samantha Brown. She’s still around, but you don’t see her on television like you used to. She was the host of the most perfect travel series on the Travel Channel, and I watched it like it was a church sermon.

I vividly recall being home alone one day when I was probably in ninth grade. It was evening, and I had an episode of Passport to Europe playing on our ancient television while I was decorating the Christmas tree. I hadn’t yet made my first European excursion, but it was on my mind, so watching this particular episode lit a flame within me that has never dimmed. Those thirty minutes were almost assuredly one of the most significant and transformative moments of my life, it’s made this ridiculous creature that I’ve become.

There were two episodes that took place in the south of France, and I can’t tell you how many times I’ve watched them over the ensuing years. When I need inspiration, comfort, nostalgia, or when I’m so homesick for France that I can barely stand it, I turn them on. In the first installment, Samantha was in Monoco, but then decided to go out on a boat ride where she spotted the little village of Èze hanging on a cliff above the sea. As she walked through that tiny place, I knew then that this was a world that I wanted to be a part of, that I needed to be a part of, and so I did. A few years later, my mother and I hiked up the Nietzsche Pass from the sea and reveled in the splendor of the medieval streets. I’ve been back several times since that first day and it’s always such a treat. I never made it over on this trip to Europe, which I regret now in retrospect.

In the second episode, Samantha went to Cannes and Nice. While she was there in France’s fifth most populous city, she stayed at the Palais de la Mediterranee, so, of course, I had to do the exact same thing.

Therefore, when I rose luxuriously in my wing of Le Negresco, I tossed my hair on top of my head, letting my sunglasses act as a headband and headed that way for another night in a five-star hotel. (This birthday treated me particularly well.)

It was a while before it was time to checkin, so I thought that I might go over to my apartment and tidy a few things up, but the thought of going into that hole in the wall after a monstrously large suite was too much for my delicate psyche, so I went to lunch instead at Daar Djerba. I am so happy that I’m not afraid of restaurants anymore. I used to be too insecure with my French and too unsure of what the hell I was doing, but I’m not that person anymore. 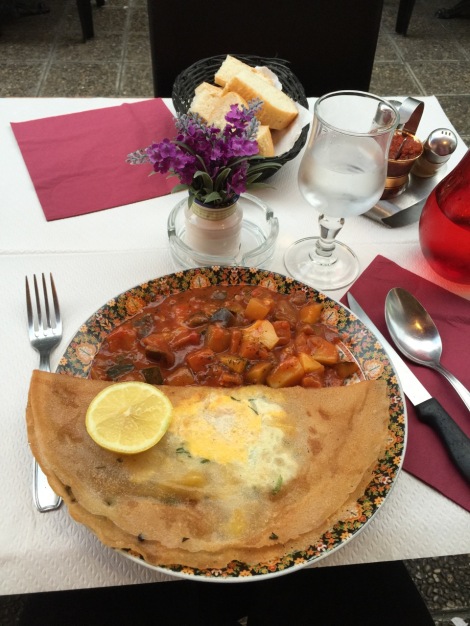 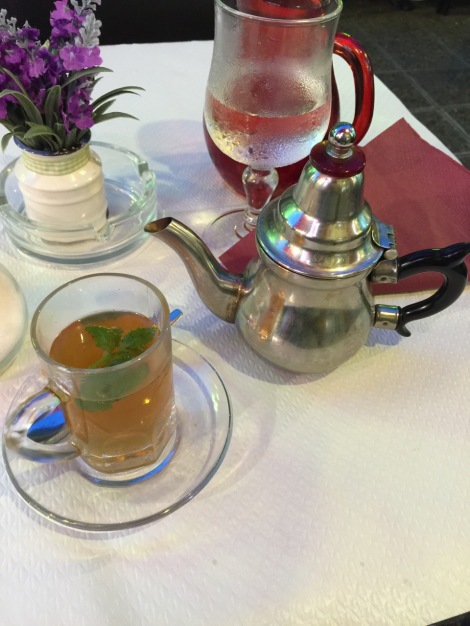 I luxuriated with a glass of mint tea and watched a family struggle to be understood. Linguistics are one of my major interests, so I watched this as a study. Once I could hear them more clearly, I realized that they were trying to get the Arabic man to understand their order in German. This was clearly not going to work. I volunteered to translate their German order into French, and then one of the patrons volunteered to translate the French into Arabic. It was ridiculous and almost exactly like this scene in I Love Lucy:

I had a wonderful lunch, stopped by one of the friendliest post offices I’ve ever visited, and then made my way to the Palais de la Mediterranee. 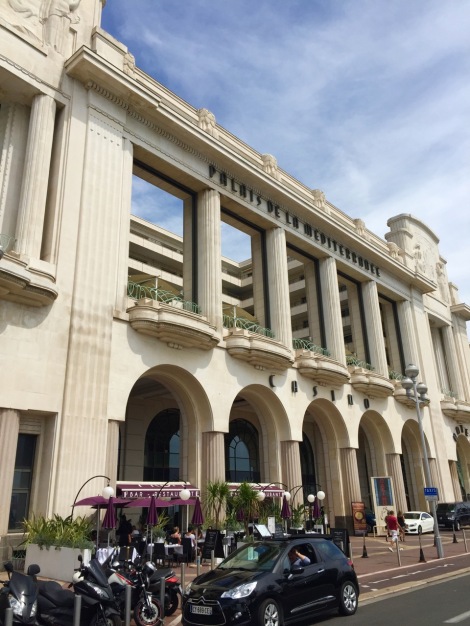 I was immediately charmed by the modern and luxurious lobby. The history of this hotel is quite confusing. It was built in the early 20th century as an Art Deco-influenced casino. It fell into disrepair later on and was being demolished, but thankfully a bunch of people came together to save it. So, the insides were gutted, but the exterior was left and then a new interior was built within it. You have to see it for it to make sense. So, while the outside feels historic, the inside is fresh and new, but not in that spartan way modern design bores you with. I approved, and I rarely do that.

My room wasn’t quite ready, so I was escorted upstairs to a private lounge where I could sip all the espresso I wanted while sitting on a balcony overlooking the city.

This was a charming touch and I had an enormous quantity of espresso. Don’t tempt me with it! 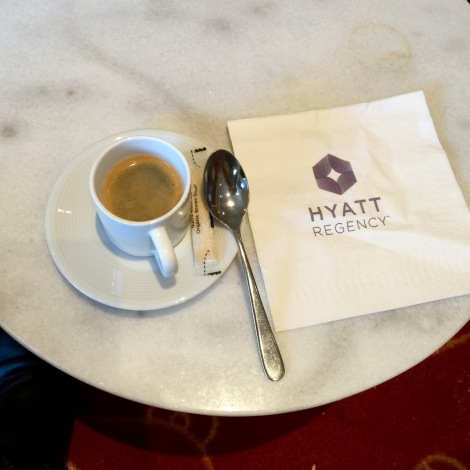 After a while I went down to collect my key and was soon in my room.

It was wonderful, but it simply cannot compare to that room at Le Negresco. Nothing can! I hope that someday I can stay again in a room that is comparable in size and comfort. This one was beautiful, though it didn’t feel particularly special. Very high quality and very comfortable, but very much like any Hilton in the world. The balcony that I had, though…that balcony was wonderful. It overlooked the city and I simply had to take one of my iconic selfies, sprawled out like Miss Tyra taught me from all those years of watching America’s Next Top Model.

I spent a great deal of time on that balcony, luxuriating, writing, sending off emails that I had been putting off, and enjoying the sunshine without the humidity. After all the rains that had poured down on Nice, there was finally a wonderful change in climate. I explored the hotel for a bit, but it wasn’t tremendously exciting, so I decided to head out on the city and buy myself some more birthday gifts. You simply have to treat yourself when you’re in a position to. So I went to Zara.

I was in love with absolutely everything, but I had a hard time making a choice. I was DEEPLY in love with this coat: 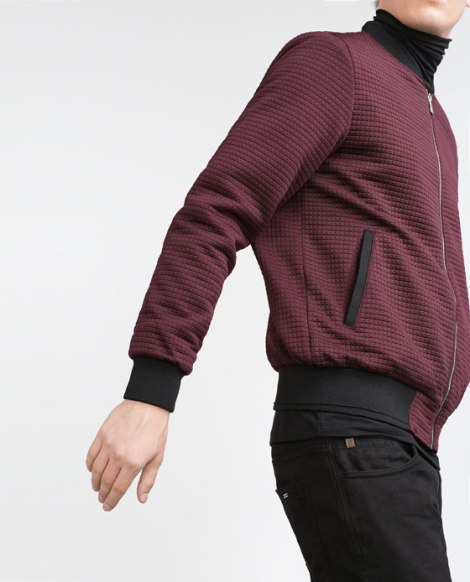 but my arms were just too long. Weeping, I turned around and discovered a cardigan cape:

I draped it around myself and nearly collapsed, so I immediately proceeded to the checkout lane.

Still not satisfied, I decided I had to stop in the Galleries Lafayette again and peruse. Something had to be there. I knew it was lurking, that purchase of my dreams, so I let myself wander until I stumbled across it. There, in the distance, was a little boutique of The Kooples. I entered. This was a big deal reader, but I don’t remember why. You see, Jessica and I have been making jokes about The Kooples since 2011 when we started seeing them all over Paris. We couldn’t figure them out. The advertising campaign confused us, and we weren’t exactly sure what they were trying to sell. So, we never went in and instead shouted, “KOOPLES?? WHO ARE THEY?” I guess you have to be there for that to be funny.

So, anyway, I walked straight to a beautiful scarf that cost over a hundred and fifty euros. It was so soft that it felt as if it were made of air. Then I looked at the price tag again and saw that it was on sale for only thirty-five euros. Giddily, I pranced to the cashier, who took my tiny scarf and stuffed it into an enormous cloth bag. I didn’t complain. I was so pleased.

Back at the Palais de la Mediterranee, I decided to visit the pool restaurant for dinner, and am I ever glad! The staff here was inconceivably nice. I have truly never experienced such sumptuous treatment by waiters. They were endlessly patient and incredibly professional. I was quickly escorted to the dining area, along the old casino walls that looked out onto the sea. The maître’d was incredibly concerned with finding me the proper table so that I could watch the sunset. I felt like a prince. Any view would have been incredible, but the one that I had was remarkable.

Soon, a salad covered in amazingly rich black truffles showed up with a glass of wine. I have had truffles before, but only a hint of them. Most places shave them so thin that they are nothing more than whispers of the fungus. Here at the Palais, they provided hearty shavings, so I had the chance to experience a truffle properly. They are incredible. No wonder people go mad for them. They’re like a meaty, firm morel mushroom. I couldn’t get enough. And there was probably a pound of parmesan shavings tucked into the leaves, so I was in heaven. 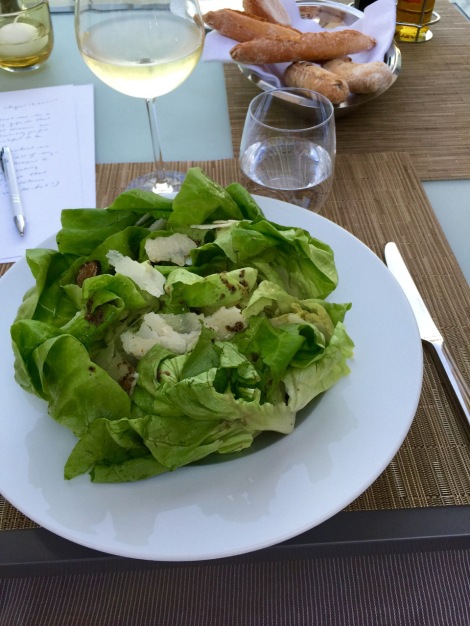 I can’t say a bad thing about the wine, either, or the fabulous breads that my waitress brought out and elaborately explained to me. There was whole wheat and chickpea and white flour and another one that was studded with olives. Every single one was delicious.

I was having such a nice time and I didn’t want to leave, so I ordered a glass of champagne. Reader, always order champagne. There is nothing in the world that makes me feel better about life. If I could, I would drink a flute of that wonderful wine and smile contentedly for an hour or so every night. It transports me somewhere special that I can’t quite define. Maybe it’s because I drink champagne at happy places and I’m taken back there. I go to Harvey Nicks in London or that gorgeous café next to the Jardin de Luxembourg where Anne, Sue, and I toasted our unlikely friendship, or that night in Paris years ago where I had dinner with my Cordon Bleu classmates and we all got drunk on quality wine and champagne and talked about kittens, the list of happy occasions is endless. Champagne thrills me. Life can be wonderful sometimes. It’s wonderful all the time. Just the fact that you live at all is wonderful. But there are particular moments when it’s divine.

It didn’t take me long to agree to a dessert course, and I let the waitress choose for me. There were too many options and I no longer discriminate. I’ll eat any dessert. She brought me what I can honestly say is the greatest dessert I’ve ever consumed in my life. Here’s a tragic picture of it: 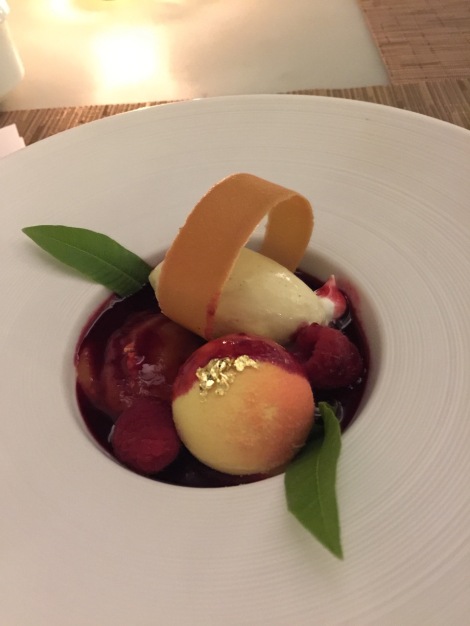 It was peach ice cream with fresh peaches, peach meringue, raspberries with sauce, a delicate tuile, and garnished with gold foil. I devoured it. I could have had a hundred servings. It changed me as a person.

I floated back to my room, complimented my reflection in my new clothes:

Then I sank into another gigantic bed. This five-star life might get addicting. Thank you, Samantha Brown.